Chinese GDP came in below expectations overnight at +7.9% vs +8.1% expected, yet it remains well-above the CCP’s target rate of +6%. Yet with China’s credit impulse fading quickly – the amount of new loans issued relative to growth – it appears that the world’s second largest economy is flashing some warning signs about where global growth could be headed in the second half of the year. It’s not great news for the Australian Dollar, which has been under near-constant pressure over the past month.

US weekly initial jobless claims came in at 360K, right at expectations, and the four-week average of 382.5K is now the lowest four week average since the pandemic started. With public schools reopening next month, vaccination rates continuing to climb (albeit slowly), and unemployment insurance benefits rolling off in September, there are tailwinds in the near-future that should keep the US labor market well-supported heading into the fall – delta variant or not. 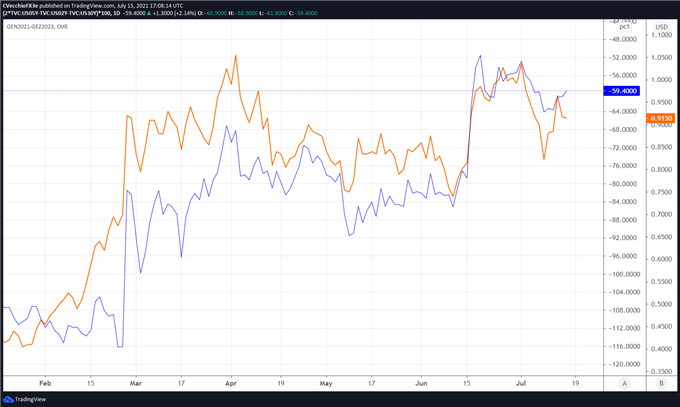 While acknowledging that inflation could be running hotter for a few more months, the Fed Chair continues to insist that price pressures are largely transitory. And the fact is that he may be right: when you decompose the latest inflation report to normalize for pandemic-sensitive inputs, it’s evident that the statistical base effect and supply chain issues are distorting headline figures – neither of which would be solved by the Fed raising rates. Also, the Fed’s focus on its labor mandate has never been more intense, something that shouldn’t be downplayed.

At their high this month, after the June US nonfarm payrolls report, there were 107-bps worth of rate hikes discounted by December 2023; now, there are 92-bps priced-in. But having coming off their monthly lows (82-bps discounted), there has been some recent support for the greenback.

While the most important week of the month has not disappointed thus far, there are still a number of significant data release due out before the week comes to a close. While typically not that interesting, the Bank of Japan rate decision poses an interesting risk as there have been some calls for adjustments to the central bank’s inflation mandate. In a similar vein, there is the final June Eurozone inflation report due tomorrow.

But the most important remaining event is the June US retail sales report. Perhaps the best monthly indicator we have into the largest component of US GDP, consumption, the US retail sales report is due to show some minor weakness. Yet looking at the expected core reading, which strips out some of the pandemic-sensitive and supply chain hampered aspects of spending (e.g. automobiles), suggests that the US economy is continuing to hum along.