I didn’t think markets could get much quieter than the day before, but the S&P 500 keeps managing the seemingly impossible. As we move into Thursday’s trading session, the benchmark US index is coming off activity levels that are as extreme (for inactivity) as anything we have seen since before the pandemic struck at the beginning of 2020. On the one hand, it is natural to see markets normalize from the extraordinary tumult of a year ago; but where we stand now is a pendulum swing in the opposite direction. It’s an extreme in a different point on the spectrum. From the SPX, the past session’s range was the smallest daily span (as a percentage of spot) since April 26th and there is only one other day more reserved before we have to look all the way back to December 2019. On another measure, the average true range, or ATR, as a measure of actual volatility dropped to its lowest reading in the same 19 month span with the 5-day tenor. This seems an appropriate drain in volatility as we head into NFPs and July’s seasonal expectations, but these readings are even more extreme than the circumstances would warrant. This suggests at least a modest break is in scope before the week ends – and I would say likely before Friday’s employment report. 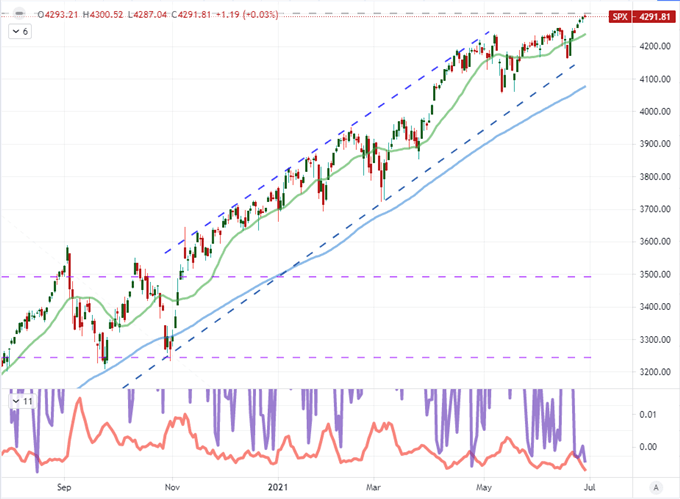 While I use shortcuts to evaluate market conditions as readily as anyone, I like to check in on deeper measures to get a more comprehensive perspective on the most influential fundamental theme for the financial system: global risk trends. Looking across the spectrum, there is a low correlation among unrelated speculative asset classes though most are generally struggling for clear movement. This suggests that the markets are not operating with a sense of either greed or fear. That said, there remain more sensitive measures to track appetite such as the Nasdaq 100 to Dow ratio. The comparison, a measure of momentum over value, edged to fresh four month highs this past session. Alternatively, there was a notable contrast in performance between two alternative risk measures. On the bullish side, the high yield fixed income ETFs (HYG and JNK) advanced to new multi-year highs in earnest; but the FX market’s dividend play in Yen-based carry trade pairs dropped Tuesday. Neither is likely to generate serious drive in their immediate endeavors, but it is worth watching which holds out longer. 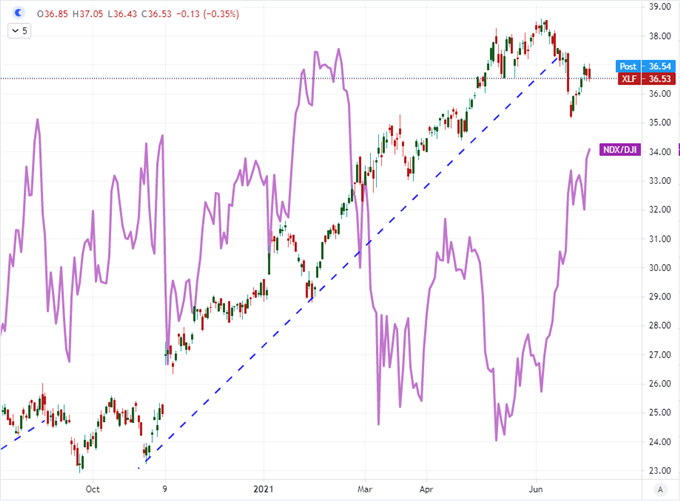 The Fundamental Charge for EURUSD

This past session, my focus for most event-laden currency cross – and thereby most capable of generating fundamentally-charged volatility – was EURUSD. On the Euro’s docket, we were offered a run of data that included Eurozone economic confidence, consumer inflation expectations and German CPI. On balance, the data bested expectations and made a bullish case for the currency. Nevertheless, the Euro gained little traction on the run. In fact, EURUSD cleared its overly-tight range with a break to the downside. We could try to attribute this resolution to the US Conference Board’s consumer confidence survey which climbed to its highest in 16 months, but the gains were registered before the data printed. To be fair, the data didn’t inspire domestic capital market assets (US stocks) either despite the implications for growth. Perhaps the component measure for inflation hitting 6.7 is an offset given the attention to Fed rate speculation. 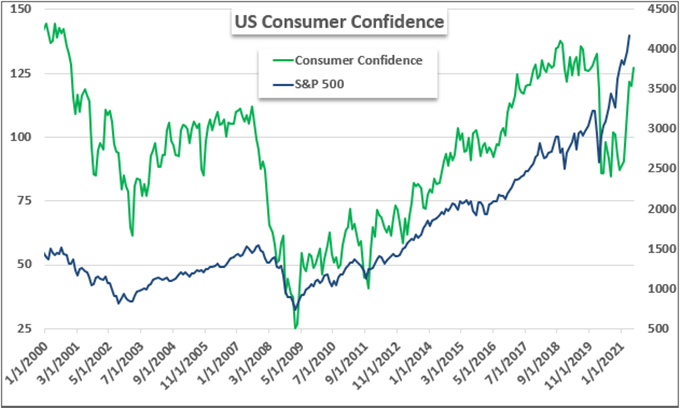 Looking at the Dollar in relief, the currency did enjoy a considerable rally against most counterparts this past session with the exception of the Japanese Yen. Considering event risk played little role in generating short-term volatility perhaps this was an underlying reflection of risk trends whereby the Japanese currency benefits more moderate levels of de-risking. Ahead, the Dollar will have more data to chew on in the ADP private payrolls for June. These figures generate far less impact than the official government payroll report; but given there is some time between release and weekend liquidity drain, perhaps it could functionally gain more traction. That all depends on how material the monthly change proves. In the meantime, keep an eye on the Euro (EURUSD, EURGBP, EURJPY all have interesting technical pictures) with the Eurozone’s consumer price index (CPI) release on tap. If the ECB is seen as being pressured to reign in the accommodation, the message could readily be a global one. 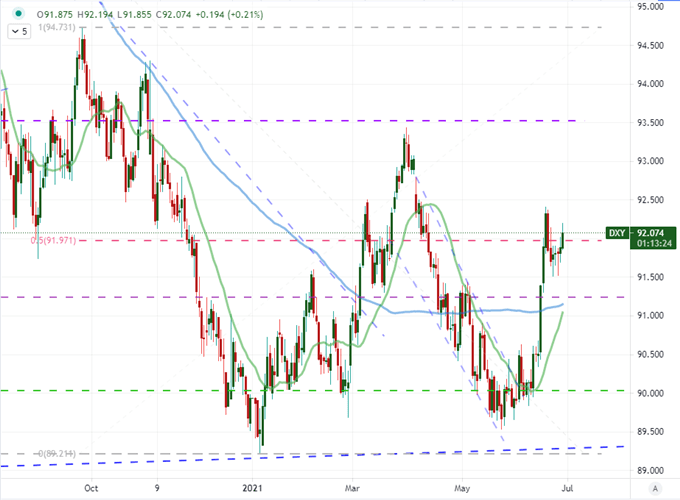 USDCAD Has Event-Based Potential and Gold Is Drawing Traders’ Attention

Looking through Wednesday’s top economic event risk, the confluence of modest US data will meet a potentially potent mix from the Canadian docket. Normally, the monthly (April) GDP reading and upstream inflation figures would garner little attention from the market. However, circumstances have shifted lately with competitive rate projections representing a more capable fundamental driver. While the Fed may have shifted forward its rate hike time frame and intensity at its meeting two weeks ago, the Bank of Canada actually tapered its asset purchases a month ago. What’s more, the BOC is expected to further reduce capital infusions sometime over the coming quarter. The data will contribute to this possibility. If the market reads the data as contribution to the comparative value, the impact could be more substantial. Even if we get a hearty impact, I would not read too much into a bullish effort to overtake 1.2500 until liquidity fills in. 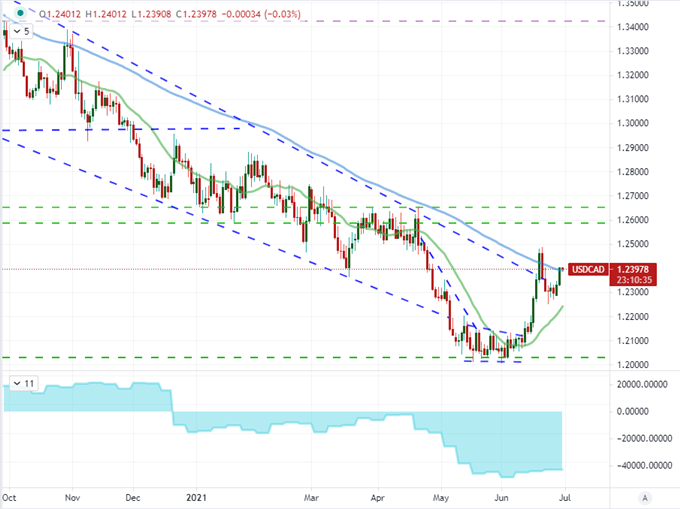 Another market that deserves a closer look is gold. We have been covering the commodity heavily on DailyFX over the past few weeks given the bearish progress, but I’ve not included it in my analysis very often. With the Greenback’s advanced this past session, the still principal anti-fiat dropped below the midpoint of the post-pandemic range (March to August 2020) at 1,765. Interest rate speculation holds significant sway over this market as the very appeal it holds as an alternative to interest-bearing currencies is undermined by a rising rate forecast. Below is Gold overlaid with the outlook for US interest rates (inverted). If this were the only factor for influence, I would wait until liquidity were resolved; but speculative interest adds another dimension of appeal here. Speculative futures positioning on the market has dropped to the least bullish position (net long 166,214 contracts) since June of 2019. In contrast, retail CFD traders with a shorter duration focus are matching their heaviest net long position since March – when the market marked its low. 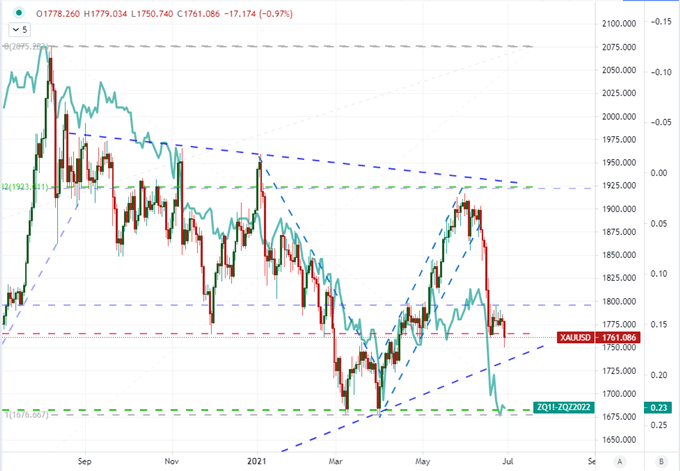