The Contrast in Levels and Activity Grows Ever More Exaggerated

The market’s have dialed down the excitement but bolstered the bullish signaling to start the new trading week. It will likely be difficult to shake the market from this controlled sentiment – though direction doesn’t seem to carry as much weight when day-to-day activity is this restrained. Liquidity is the critical feature of our trading landscape and the activity levels of benchmarks like the S&P 500 show just how much influence this backdrop condition can exact. The US most heavily traded and principal benchmark for derivatives in the financial system edge higher to a third consecutive record. That said, the 4-day ATR – a measure of realized volatility – dropped to its lowest level since December 2019. As it happens, the medium-term activity reading (20-day ATR) is at similarly historical lows. Volatility is mean reverting, but attempting to break this restraint this week would be difficult. That doesn’t mean there isn’t any activity in the market. The Nasdaq 100 for example rallied 1.3 percent as the index seemed to attract a concentrated appetite for momentum among desperate ‘buy the dip’ bulls. 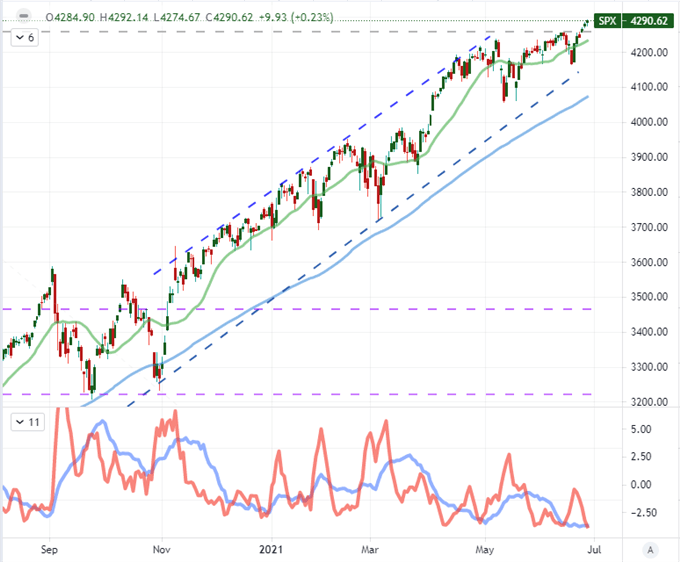 Drawing back to keep a full appreciation of our liquidity situation, we are in the flagging stage of a strong 15-month recovery. Without greater potential for return in either favorable yield forecasts (hard to do without higher cost) and/or capacity for sustained economic expansion, the neck-break pace of growth becomes increasingly impossible to sustain. The exaggerated drain on activity this week in advance of the NFPs and the US holiday weekend could very well mark the nadir of systemic inactivity. If not, we are going to be looking at a very quiet Summer. On a weekly chart for the SPDR S&P 500 ETF – what many individual investors hold as a reflection of ‘the market’ – volume has held to relatively suppressed levels relative to the initial recovery last year. That said, the 20-week average for turnover on the popular asset remains comfortably above the pre-pandemic lows. Volatility on this time frame on the other hand is reverting back to levels that we slogged through December 2019 / January 2020. If the climb continues, these activity measures will likely continue to sink until upheaval rocks the market. Alternatively, if we contradict norms and the market starts falling despite the season; expect volatility and volume to pick up. 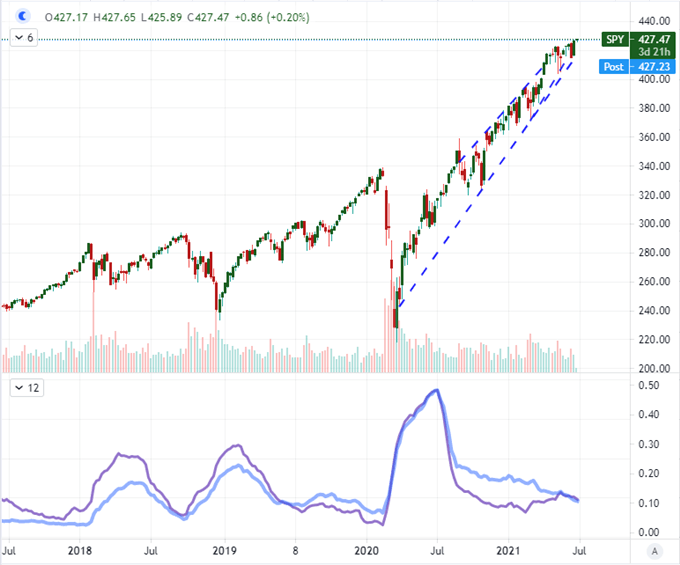 For fundamental themes that can scale up to the wholesale ‘risk’ risk level, I’m keeping a weathered vigilance over headlines that are interpreted as a bearing for global monetary policy – a fundamental building block of optimism over the past decade. However, the Fed is the only major central bank at present that seems to represent the mood of the entire market; and the group is more than happy to let this market quietly digest the implications of their forward shifted rate forecasts from the FOMC’s SEP and remarks that warm up the probability of a taper in the foreseeable future. Another theme that I have monitored is the reaction to the major US banks’ plans to distribute profits to shareholders after all 23 institutions monitored by the central bank received a clean bill of health against stress tests. After the close Monday, the banks began to announce their intentions to distribute the capital. There were a few impressive responses, including Morgan Stanley whose shares rose approximately 2.5 percent afterhours after announcing it would double its dividend to $0.70 per share and engage in a buyback program for up to $12 billion in shares. However, that seemed to be the extent of the initial enthusiasm. Some companies were actually trading lower after hours – like JPMorgan and Citi – as it seemed the announcements weren’t clear enough or fell short of expectations. In previous years, large buybacks in the banking sector or among large tech firms helped boost an already-mature market. It’s possible optimism may pick up Tuesday on the open; but right now, it seems the market is reining in the charge. 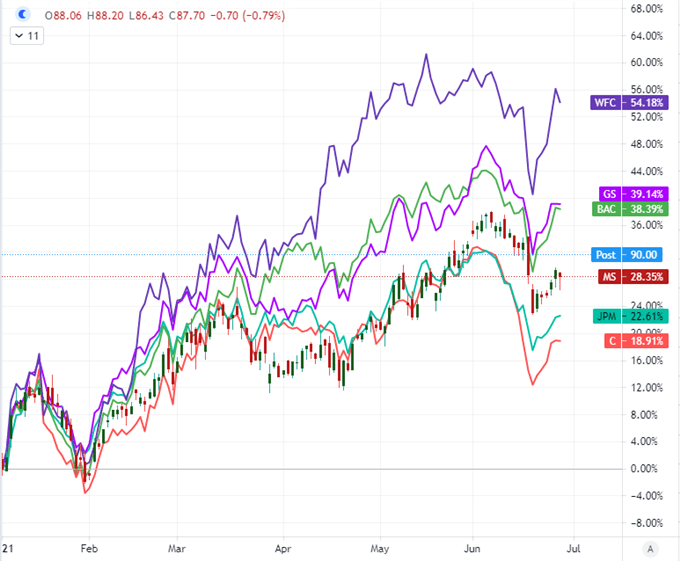 Thankfully, as we move into Tuesday trade, the economic docket will pick up notably and carry us through with at least a few noteworthy releases all the way through Friday’s NFPs. That said, there is no certainty that this active calendar will generate anything more meaningful in volatility for the markets. If anything the Dollar remains one of the flashpoints for event-driven volatility. Thematically, it has proven to have a more tangible responsiveness to recent changes in rate forecasts for the US, but the lack of traction after the PCE deflator this past week still rings in bulls’ ears. This has cooled my expectations around Fed-speak this week (Rosengren’s, Williams’s and Quarles’s remarks this past session did not stir the pot), but data may have a better chance as it doesn’t come with the inherent regulator for keeping market’s stoic. Ahead, we have the Conference Board’s consumer confidence survey for the current month which can speak to spending expectations and inflation forecasts. 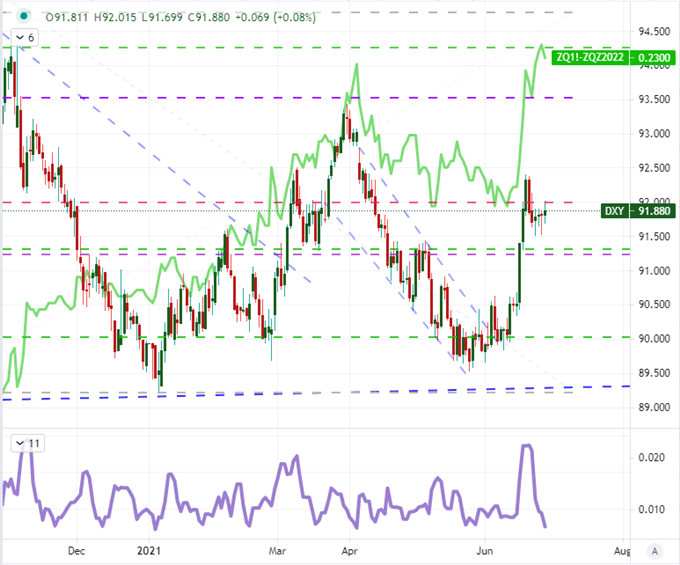 Taking it a step further, the best Dollar pairing for potential volatility today – purely based on the depth of meaningful event risk due for release – is EURUSD. To complement the US sentiment data, the Eurozone is due to release June economic, consumer and industry confidence figures. Furthermore, Germany will release its own initial June consumer inflation report (CPI) while the Euro-area’s consumer inflation expectations data will also hit the wires. The ECB is considered to be firmly situated in the dovish camp with an economy that lags the US recovery on the delayed pandemic reopening, but that view could readily change through this event risk. What’s more, the technical backdrop is better situated for volatility. EURUSD’s past 4-day range has proven extreme, comparable to only a handful of similarly restrained periods (all shown in the chart below) stretching back in the 16 months since the pandemic first struck. Short-term volatility is good for a break from this narrow a price band, but there will be no mistakable the larger technical boundaries surrounding the pair – which can draw more range appeal among traders.

Chart of the EURUSD with 100 and 200-Day Moving Average, 4-Day Historical Range (Daily) 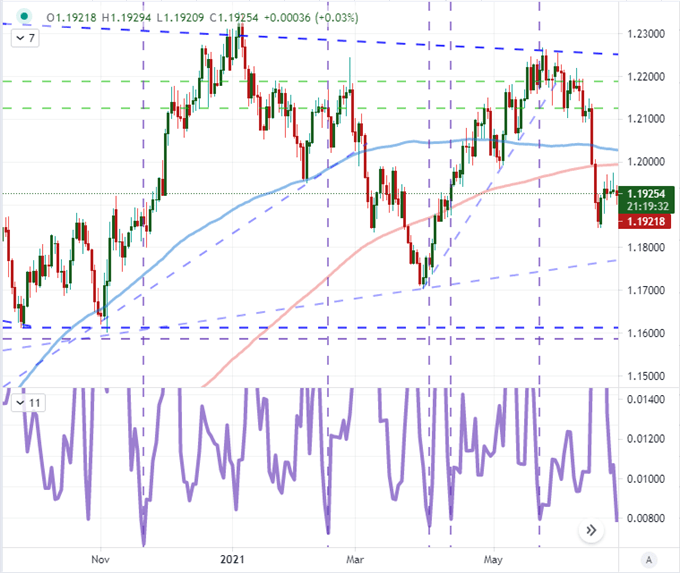