For the bulls just looking for a headline reassurance to support their prevailing views, the record highs registered for the Nasdaq 100 and S&P 500 this past session was a soothing development. Yet, what about the traders that are not yet in the market or those that need convincing to add to their positions? Is the historical altitude enough to draw more capital into such a mature picture? One way or the other, fresh capital needs to find its way to these extremely expensive markets to keep pushing things higher. Technically, a back-to-back doji candle from the Nasdaq does little to inspire. There is some fundamental event risk to digest for the final trading day this week which may further confidence – reports of an infrastructure program break through and the after-hours news of the Fed’s stress test results. However, there is also a lurking threat to those that have come to inherently depend on the charity of the Federal Reserve with their favorite inflation indicator due to cross the wires. 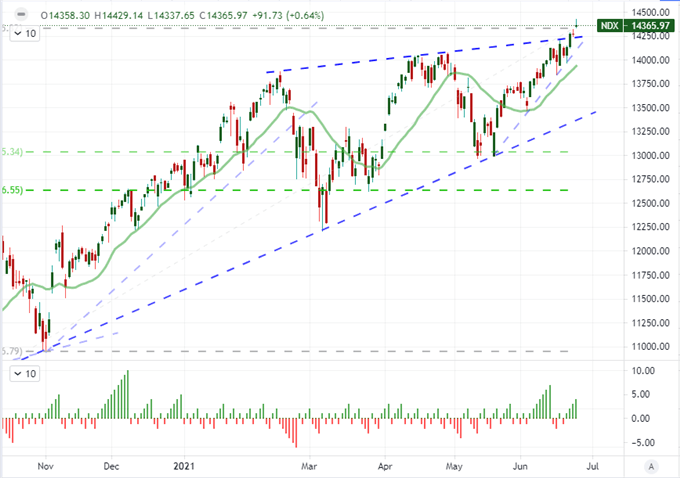 Thematically-speaking, the reports Thursday that President Biden had come to an agreement on a stimulus bill with a bipartisan group of senators raises hopes that perhaps there is a deep-pocketed stand in for the central bank as it contemplates its slow withdrawal. That said, remarks by the President that he would not sign anything without a deal on the American Families Plan will likely lead to an insurmountable short-term hurdle for getting this massive spending effort underway. Far less ambiguous should be the release of the Federal Reserve’s bank stress test results. As expected, all 23 major banks were given a clean bill of health and considered to maintain capital levels “well above” the cut off in the event of a worst case scenario financial crisis. That in turn leads to the green light for these major companies to increase dividends and announce large stock buybacks after June 30th. In previous years, these efforts led to incredible extension rallies as the tide lifted retail and professional trader positions. That said, after-hours trade on the SPDR Select Financial index showed incredibly little bullish response to the news. Has this been fully priced over 15 months of recovery? Morning trade will tell. 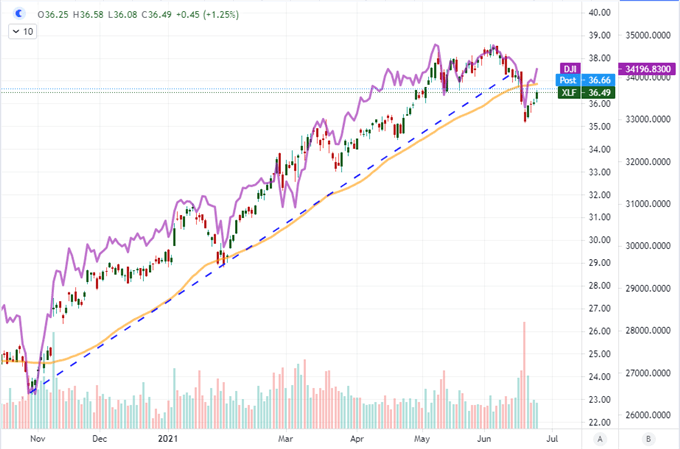 A Last Stab at Working Up the Markets Through Rate Speculation

Where anticipation of fiscal stimulus and stock buybacks are at worse a status quo influence on risk assets, the top event risk on the US docket stands as an acute possible threat to extended risk exposure. The personal consumption expenditure – or PCE – deflator is the Federal Reserve’s preferred measure of consumer inflation as it based on the same methodology of calculation as the quarterly GDP report. The core reading hit an incredible 3.1 percent in the previous update for the fastest pace of growth since 1992. Economists’ expectations are for the measure to accelerate further to a 3.4 percent pace. Should the reading meet or exceed those forecasts, it will represent a serious risk that the Federal Reserve will in fact proceed with its normalization procedures in the foreseeable future. Given the US indices response to the forward shifted rate forecasts from the FOMC SEP this past week, that could be a trigger for risk aversion. 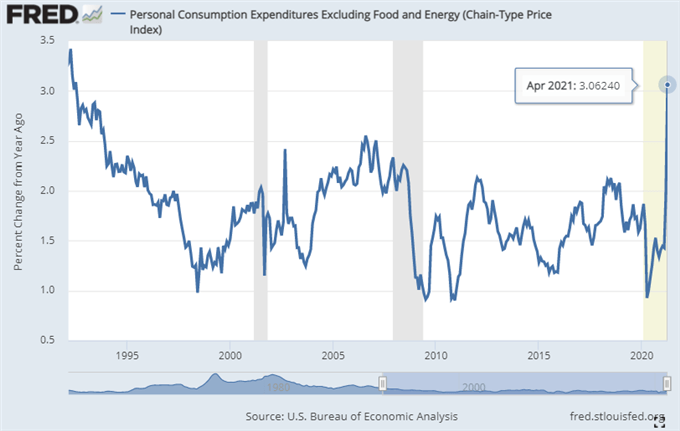 I am always keeping a close eye on risk trends, but reticence – or complacency – has proven a powerful numbing agent. On the other hand, the Dollar has been more than willing to response any changes in the monetary policy tide. Though we have seen a rebound in the S&P 500 back to a record high this week, we have not seen the Greenback drop significantly from its highs post FOMC. That may have something to do with the fact that the implied interest rate forecasts from Fed Funds futures through the end of 2022 are almost fully pricing in a 25 basis point rate hike. Should the inflation report add to this rate forecast by moving up the timeline to announce taper, begin taper, end taper and then contemplate the benchmark rate; the Dollar would be in a good position to take advantage. 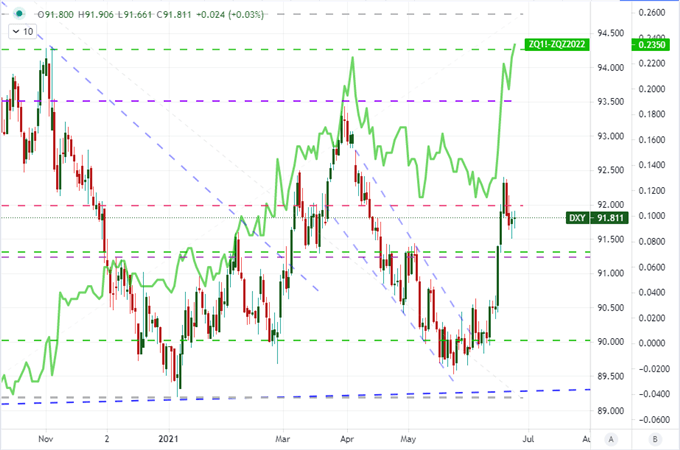 If the Dollar is indeed in a position to rally into the close of the week, I will be looking for ranges that aren’t jostling too heavily with technical barriers. USDCAD and AUDUSD are less appealing given the concentration of event risk as they have moved back and forth through important technical levels, thereby lessening their influence. A better bullish candidate is GBPUSD which has support down to 1.3800. Alternatively, a bearish outcome for the Greenback would better be served with USDJPY which has a very well-defined rising channel from which we are just coming off resistance and have a floor all the way down at 110. 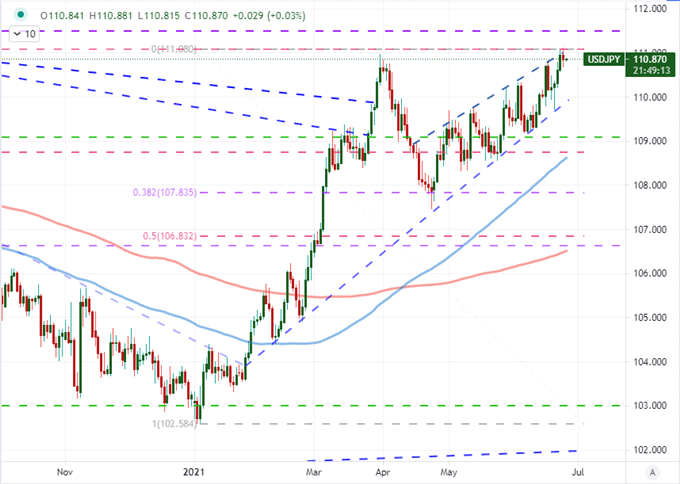 Considering the appeal of the Greenback beyond the weekend and into next week, a meaningful move for the currency could make for some interesting technical pressure. However, a few emerging market currency crosses should be added to the mix. USDZAR is very close to its post-pandemic bearish trendline resistance and can be put to task under the proper conditions. A much more interesting consideration though would be USDMXN after the Mexican Central Bank unexpectedly hiked its benchmark rate 25 basis points to 4.25 percent this past session. Should PCE raise the possibility of an imminent shift in Fed bearing, there is a bigger range to consider. On the other hand, a weak showing would contrast more substantially with the Peso’s unexpected and favorable fundamental winds. It would probably not be enough for a break below 19.55 before the end of the week, but pressure could carry over. 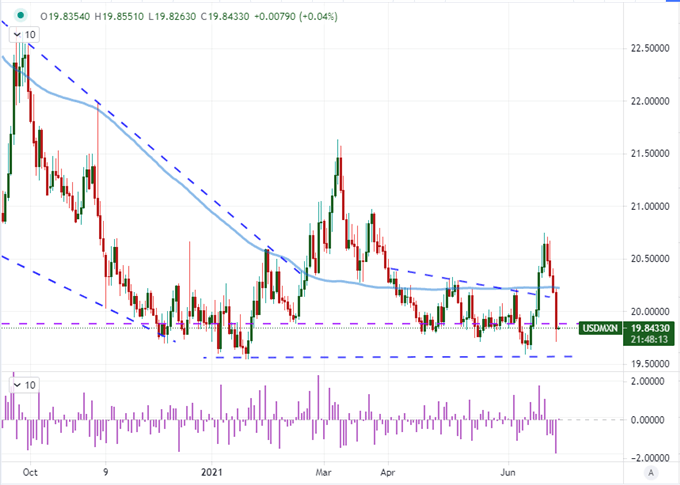