High Profile Fundamentals Spur Neither a Risk Blow Off Nor Collapse

Market conditions continue to win out. Despite impressive technical standings like the Nasdaq 100’s position at record highs and high-profile event risk such as this past session’s June PMIs, risk appetite refused to seriously budge. It may be that the fundamental run was a mixed bag or perhaps that it simply didn’t tap into a critical theme for observant market participants, but I believe factors like liquidity and volatility continue to ride above the draw of technical developments and the short-term pressure of scheduled event risk. It is at this point that we can decide to look for that next catalyst that can overcome the inertia or perhaps shift gears to trade the types of markets that we have to work with. With that kind of perspective, a doji from the Nasdaq 100 at a record high looks like a struggle for further bullish intent – possible but burdened – while a reversal would cater to a lower-requirement range. 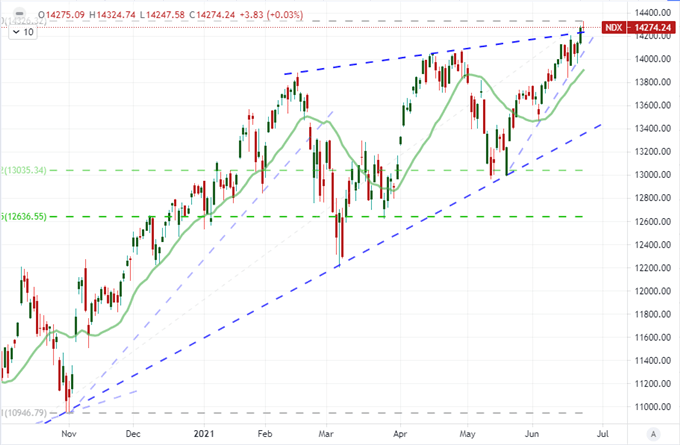 Despite the charge in volatility over the past week, the trouble with finding serious traction or outright trends is a familiar issue over the past few months. This is true for both the traditional ‘risk’ assets as well as the group on the other end of the spectrum: havens. The promise is the Dollar’s long overdue recovery has clearly stalled this week despite the implications of more hawkish interest rate expectations from the Fed. For those keeping score, the relationship between the Greenback and speculative pacers like the Dow has been a remarkably strong, negative one. That could make a case for the currency finding pressure as an unwanted safe harbor, but I believe that relationship is more correlation than causation. Or, the dominant fundamental theme of relative rates in a zero-rate environment happens to influence both traditional risk trends and the Dollar equally. 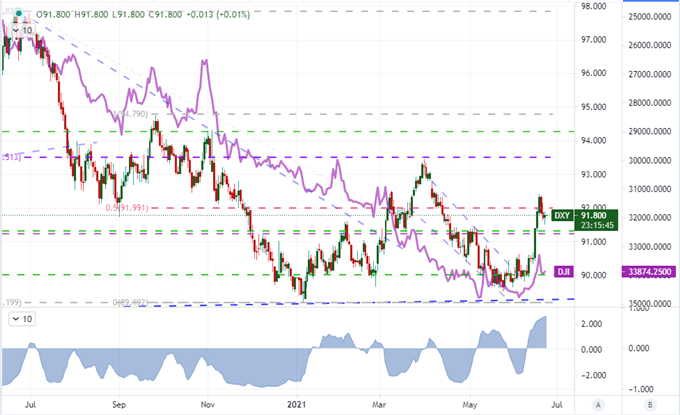 In a break from the overriding June theme, the market had an opportunity to turn away from stimulus and monetary policy to focus on economic tempo for guidance on risk trends. The current month’s advanced major economy PMI figures from Markit could be interpreted multiple ways depending on the outcome and investors’ focus. The potential for tapping a general ‘risk’ perspective would be difficult between the measures from the West already pushing multi-year highs and indices matching the enthusiasm. If the data uniformly dropped, it may have leveraged a little more response given the one-sided market – but a throttle could also rouse hopes that the Fed would retreat from its slow acclimation to future hikes. That said, the data was mixed and the US figure (the manufacturing measure) hit a record; so neither risk nor Fed speculation will earn a clear bead. 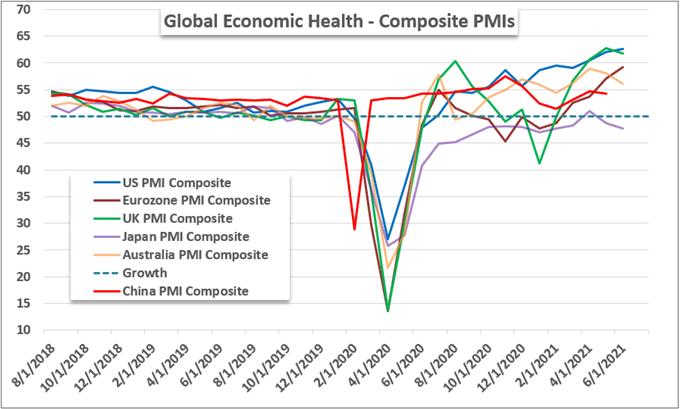 In the context of a market that defaults to measured moves, it was somewhat surprising to see distinct contrasts in the PMI data not capitalize on exchange rates where the technical bearings were already favorable to the motivation. AUDUSD is a good example where many technicians have been drawn to the major break of a head-and-shoulders pattern that took all of 2021 to form with a 200-day moving average giving way in the process. When it came time to represent former support as new resistance, the fundamentals would not be able to seal the deal. The general bearish nature of this pair is still in place, but the urgency and exactitude on the technical levels have been disarmed. 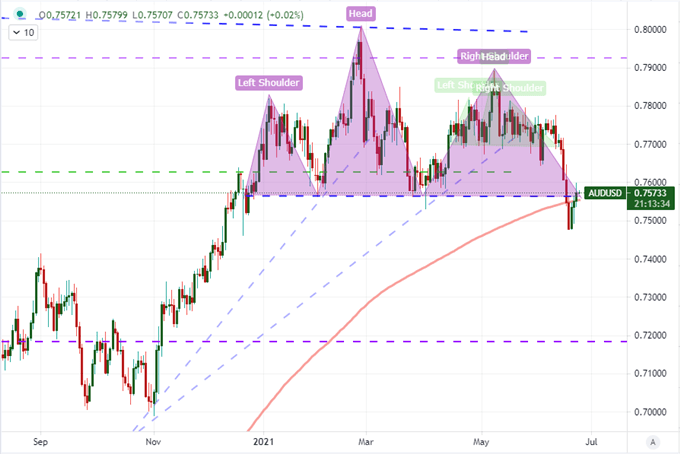 For What’s Ahead: More Fed Speculation and a Run of Data

Where PMIs and global growth pacing may not be particularly effective there is still a run of data ahead that could generate isolated volatility or even have an off chance of stirring another deeper current. In the latter camp, US monetary policy is still a factor that I will remain very diligent around. The most distinctive update I can point to on calendar for rate speculation comes with Friday’s PCE deflator – the Fed’s favorite inflation indicator. In the meantime, initial jobless claims and Fed speak should not be discounted. For example, this past session, Atlanta Fed President Raphael Bostic surprised me with his level of hawkishness when he said he expected two hikes in 2023 and the first move in ‘late 2022’. If I were calculating the time frame this would insinuate with the ‘three quarter gap’ indicated in the survey the Fed ran, the taper would be fully complete in March of next year and the start of the reduction would theoretically happen in the next few months. That would mean the July rate decision or August Jackson Hole Symposium would be when the official intent would be announced. But will others reaffirm this and/or will markets read into the insinuation? 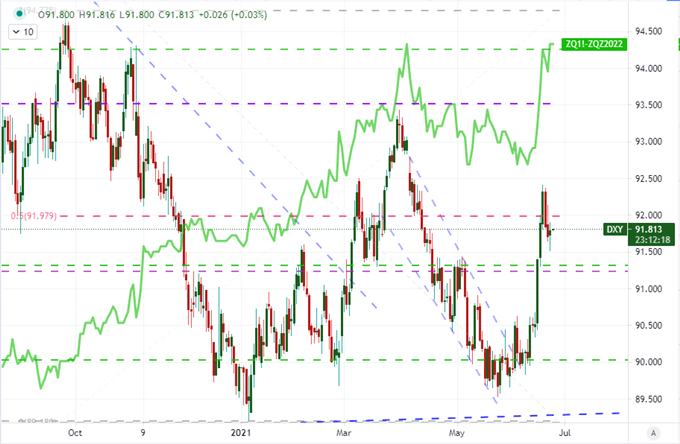 Dollar aside, the intent of the world’s largest central bank carries weight for global markets. As such, if risk appetite is the most comprehensive force in the financial system, that should remain at the top of the forward-looking radar. In the meantime, there are many paths for more isolated and short-lived bouts of volatility. In Thursday’s session, a few clusters stand out. US Fed speak and durable goods orders should be registered even if it’s capacity to upend rate forecasts is limited. Non-US, the Bank of England (BOE) rate decision and Mexican Central Bank rate decision can offer serious, relative market influence. GBPUSD is looking for a motivation to move from major congestion. Top event risk though would have to be the Federal Reserve’s bank stress test results. The policy authority has said recently that a clean bill of health – which most expect – for the systemically-important financial players could lift the restraints on larger dividend payments and stock buybacks. The latter has been a critical driver of late-cycle rally, and many will be looking here to see if the financial sector and measures like the Dow can find some further lift from the assumed infusions. 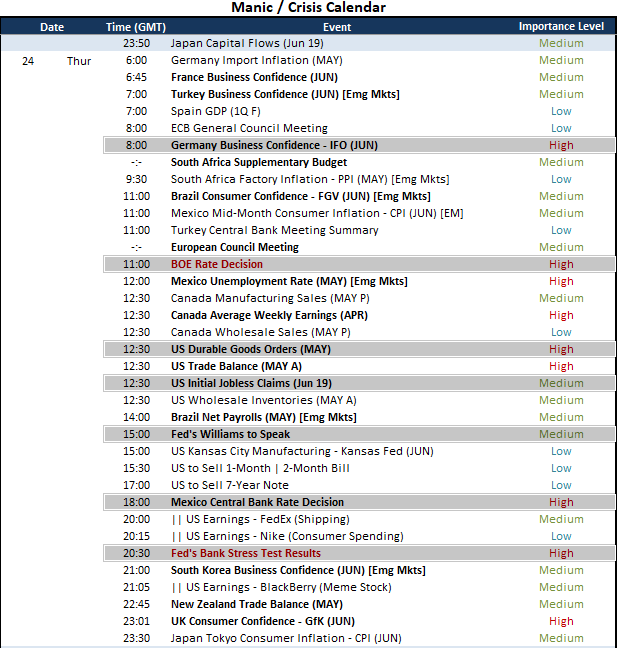