The Risk Rebound Slows but Nasdaq Notches Its Fresh Record

We are heading into Wednesday trade with risk appetite still at our backs, but progress has notably ebbed across board. Perhaps this is anticipation for a shift in the fundamental focus from US monetary policy (generally a detriment to speculative appetite) and back onto growth measures. The question for traders looking for meaningful movement out of the markets is whether June activity reports (PMIs) for the major developed economies and Amazon’s Prime Day holiday sales will leverage the same level of impact as the FOMC’s rhetoric charged last week. Remember that market conditions are still a serious current that we are fighting, and a strong motivation is needed to override the inertia. Taking stock of the landscape as heavy event risk approaches, there seems a greater preference for established (liquid) but highly-tuned assets. Once again, a good signal as to what type of markets we are dealing with is the restraint from the blue chip Dow relative to the record high from the tech-heavy Nasdaq 100 – a strong outperformer even among US equities over the past 5 years. While the 10-day correlation is pulling back from its most extreme, negative position since June 2017. 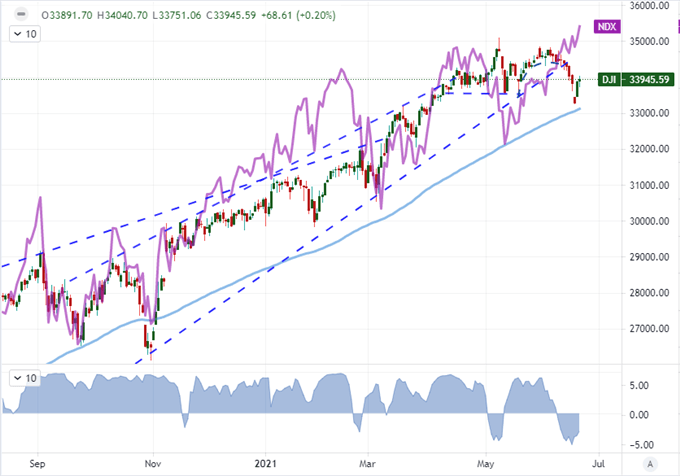 Checking in on the more extreme examples of speculative appetite in 2021, both top cryptocurrencies and meme stocks continue to struggle. While Dogecoin is suffering a larger statistics struggle (losing as much as 75 percent from its April highs through this week’s lull), it was Bitcoin that was garnering the greater attention this past session. On an intraday basis, the top coin sunk below the $30,000 mark and at that point wiped out all of its gains for the year. There was plenty of ‘#cryptocrash’ references flying around social media, but the dip buyers held back at least the breakdown of the past two month’s channel support. Meanwhile, meme stocks are still spinning their tires. AMC is still holding above 55 per share, but it does so on dramatically lower volume than at the beginning of the month. Retail appetites doesn’t seem to be riding nearly as high in these turbid waters. 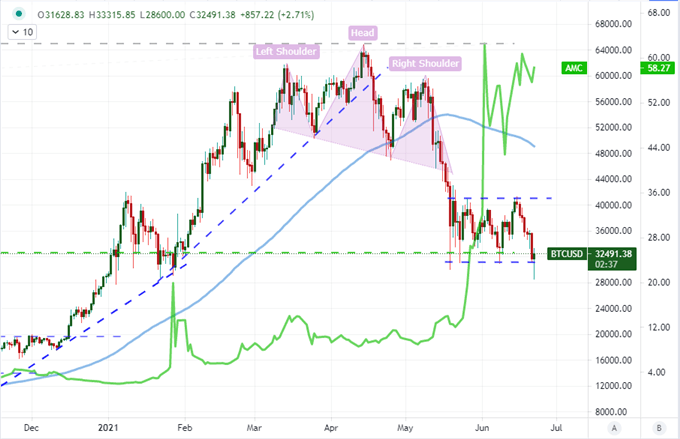 Central bankers are not traders. Policy officials actively look to avoid causing volatility in the markets – and they generally want to minimize their influence over direction and decision making broadly speaking. Yet, after a decade of pushing extraordinarily accommodative monetary policy, there is bound to be some dependency issues. We saw those connections at work last week with the response to the shifted forward timeline for rate hikes from the Fed’s own Summary of Economic Projections. Naturally, the market will remain very sensitive to any material changes in view for speculation, but there are precious few opportunities where the market’s can read an unmistakable update on the course for monetary policy – perhaps Friday’s PCE deflator is one such milestone. Without these sign posts, the Fed can work its forward guidance to acclimate to a long-term dovish horizon that may include small normalizations along the way. Fed Chair Jerome Powell reiterated his ‘transitory inflation’ chant in testimony to Congress but it was normally hawkish Cleveland Fed President Loretta Mester’s remarks that it is not time to ‘dial back accommodation’ that stuck out to me. This concerted effort eases the bearish burden on indices, but it hasn’t fully capsized the Dollar nor yields…yet. 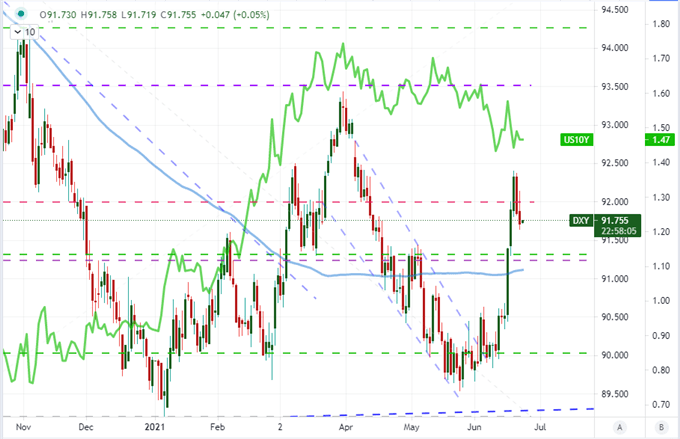 What to Watch on the Docket Wednesday

While monetary policy (particularly in the US) remains a critical theme to monitor moving forward, the coming session’s top listed event risk follows a different fundamental route. Top of the list is the timely update on economic health in the major economies in the developed world measured via the Markit monthly PMIs. The June figures will reflect upon the ongoing recovery amid the post-pandemic reopening world. The US and UK have led the field through the previous month, but the Eurozone was also recovering smartly. There is a distinct generalized risk connection in this data, but it can also fuel relative appeal between contrasting performance: in other words a bullish view for a region/currency with a strong path against a bearish view for a weak one. 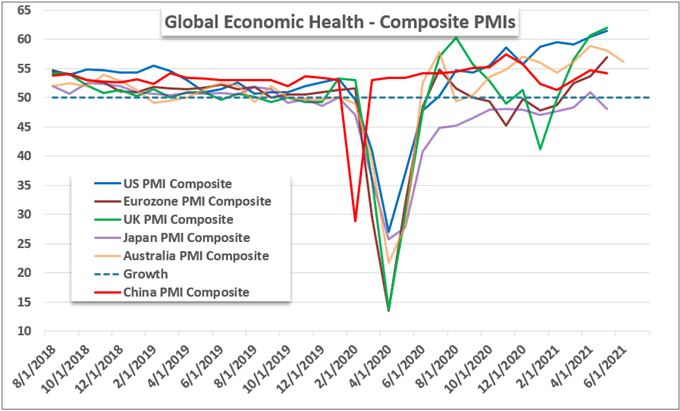 Another economic update of serious weight is the report from Amazon’s Prime Day holiday sales. Over the past few years, the performance numbers were released the day after the event closed. Given the state of recovery and speculation around Fed intent, this consumer holiday’s performance will represent a critical update on not just the US economy. 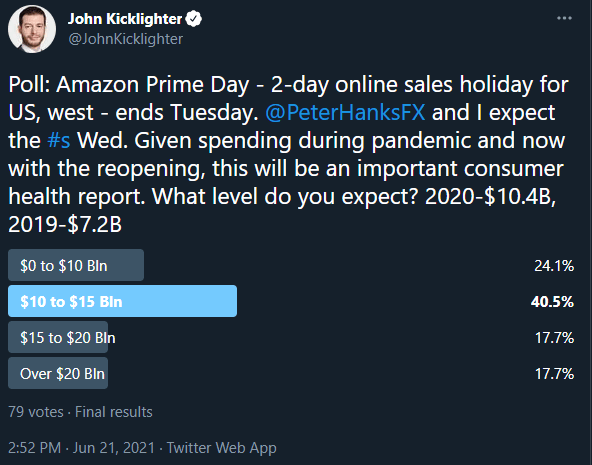 Poll from Twitter.com, Conducted by @JohnKicklighter

I’ve been keeping track of key technical moves over the past week from the Dow’s cascading breakdown to the Dollar’s epic rally. The flash of volatility is provocative but it is outside of the norm for seasonal and systemic circumstances. Naturally, the question arises on what to make of some key technical breaks that occurred during the spark of activity that now require conviction to carry the market forward and fulfill what textbooks would suggest should follow? AUDUSD and GBPUSD are two majors that have made critical breaks but are just on the other side of the key technical barrier without a clear indication of intent for follow through. Perhaps the PMIs will encourage AUDUSD to hold former support around 0.7550 as a projection off resistance into a bear trend. 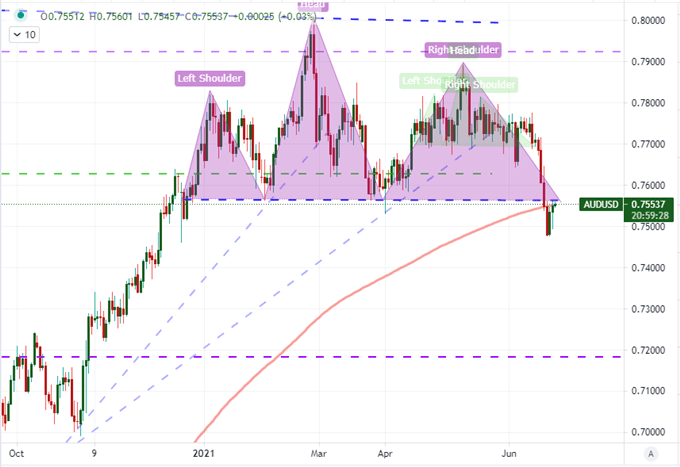 In comparison, USDCAD managed to forge its bullish Dollar break and would also fail to kick in the secondary boosters to make it a full blow trend. However, in the subsequent pullback, the pair has actually slipped back into the descending trend channel that it had just cleared. A false break reversal is not uncommon given our backdrop, but it can materially impinge intent for a subsequent loaded technical move that again attempts to reverse course. 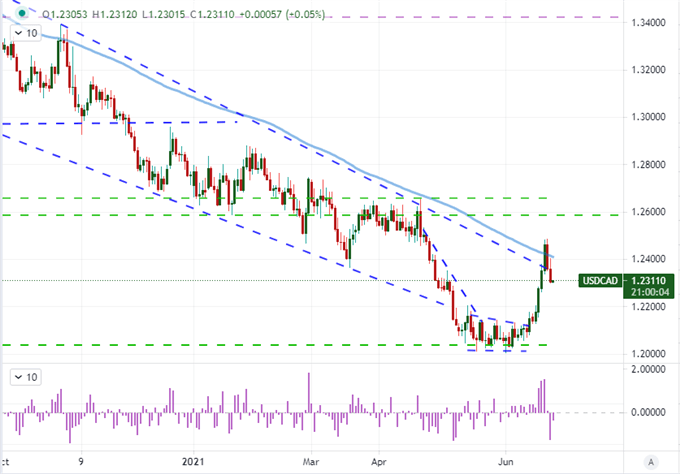