Pressure on ‘Risk Trends’ to Start the Week

US indices were on the verge of a bearish reversal and the Dollar a critical rebound after months of suppression…that is until the May NFPs hit the wires. Employment data from the world’s largest economy managed to thread the needle of both disappointing enough to throttle taper expectations for the Fed while still backing a view that the growth is on a remarkably robust pace. Of course, that interpretation will not be particularly easy to carry through into a full-scale trend when the market continues to struggle for a sense of conviction. Through the volatility of this past week, there remains a lack of full commitment across the financial system behind a view of sentiment or any other systemic perspective. That is what I will try to remind myself of as we wade back into active trade Monday. With the late-in-the-week rebound from the likes of the S&P 500, the benchmark is within easy reach of a record high. That will bolster bulls’ confidence and perhaps spur a technical break early on. On the other hand, the foundations for conviction remain out of reach. If there is a break early on in the week ahead, it is worth remaining a skeptic of the intentions after the break. 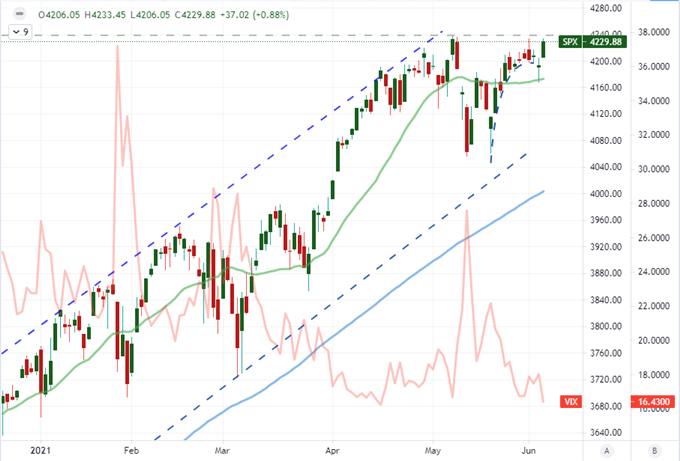 I find the S&P 500 and its peers are more robust reflection of market-wide sentiment, but those looking for the finer measurements of speculative appetite would do well to watch the top volatility representatives for clues that precede the systemic developments. There is no more prominent a benchmark for the influence of retail appetite than meme stocks and AMC in particular. The cinema operator was up as much as 173 percent this past week before settling at a ‘mere’ 83 percent gain over the period. That may seem an extraordinary performance under any other circumstance; but with the backdrop of concentrated speculative appetite and leverage, the pullback is troubling. The retail influence in this move is difficult to miss and the group’s lack of commitment to the long-term is notorious. There may be yet another wave of speculative indulgence ahead for the ticker, but ‘diamond hands’ and leverage will eventually crash into reality. This matters for traders outside of this very narrow focus because the spillover to ‘risk asset’ stability likely hinges on levitation from these outliers. 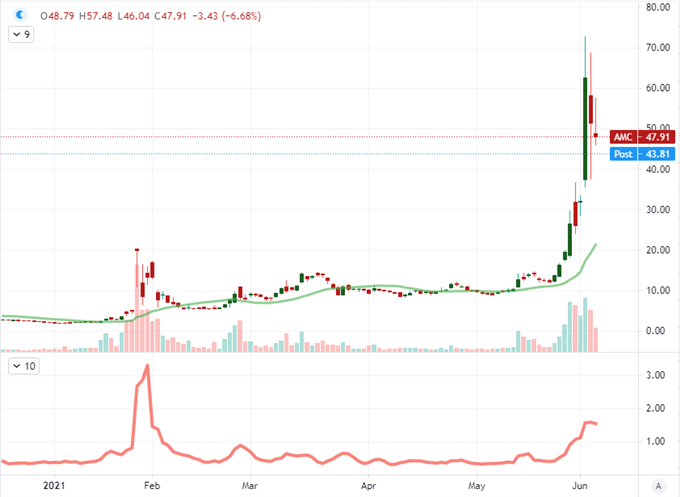 There were a few wobbles in the markets this past week, but nowhere was the impact more comprehensive than from the release of the May nonfarm payrolls and related US employment data. The US economy added an incredible 492,000 jobs to the roster, which is extraordinary under most circumstances. As a support for growth forecasts, this is a heavy lift for those wary over adding capital to markets pushing record highs. At the same time, this remarkable jobs upgrade still came in under expectations set by a consensus of economists for a 600,000 upgrade and the ADP’s extraordinary 978,000 print just the day before. The net number is unmistakably strong but the ‘disappointment’ nevertheless curbs speculation that the Fed is on a fast-track to a taper and overall normalization agenda.

Chart of US Change in NFPs with ‘Surprise’ (Monthly) 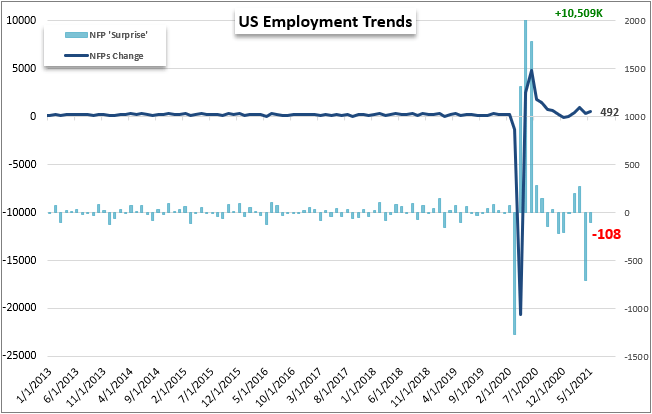 Considering how we ended this past week, Fed policy speculation is likely to be a key point of speculation in the week ahead. That is remarkable considering the next FOMC rate decision isn’t scheduled until Wednesday, June 16th. For those that believe such event risk isn’t relevant for market movement until it is imminently at hand, it is worth remembering that price action is determined by a group of speculative interests that attempt to forecast and front run. With that afront to efficient market hypothesis (EMH) uttered, we need to consider that the aggressive efforts by the US central bank to shape market expectations for monetary policy will be significantly influenced by the media blackout period that begins a week before the official central bank rate decision – so Wednesday, June 9th. If the Fed wants to set speculation on a course to reduce volatility, they would do so through the first 48 hours of trade. Technically-speaking, the blackout period begins on Saturday, but recent history suggests they may attempt fine tuning. Otherwise, the market imagination and Thursday’s CPI (the market’s favorite inflation indicator) will set the tone. 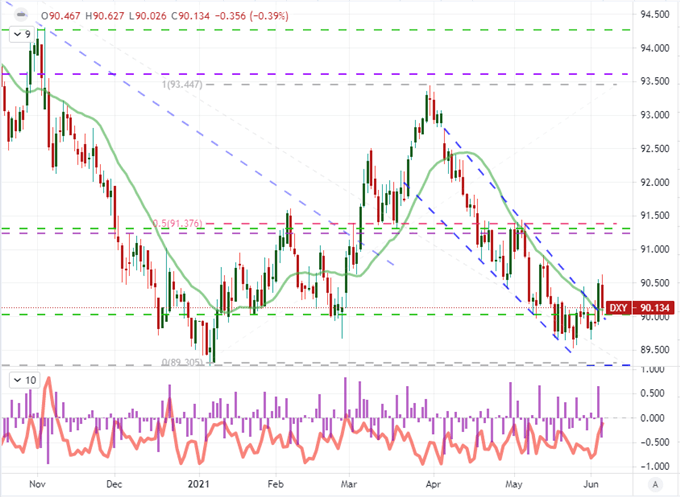 Between the unsettled picture around risk trends and the shift in attention out to the next Fed rate decision, the Dollar will be one of the more interesting benchmarks to track for guidance on the financial system at large. Of course, it could also be a market opportunity in itself. If we abide the standard close of the daily candle, the DXY Dollar Index earned a clear bullish break of its two month descending trend channel this past week. And yet, Friday’s tumble draws much of the latent potential that was charged into the market. That leaves us in a potent position for either the bulls or the bears heading into next week. That said balanced potential for the single currency is mirrored for USDCAD. The Dollar’s retreat was offset by a Canadian Dollar retreat ushered by its own employment data shortfall. That left the pair in a progressively deteriorating congestion pattern riding just above a long-term support. A breakout seems close at hand, and the ‘Loonie’ will bring its own fundamentals to the scene in the form of the Bank of Canada (BOC) rate decision. If you don’t recall, this group actually tapered and remains the only major central bank to take such an explicit step. This contrast will sharply amplify the market’s focus and likely its response to the upcoming event. 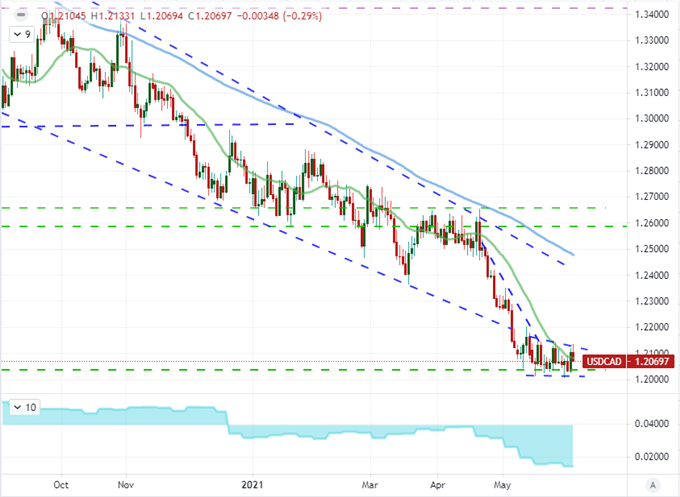 For technical heft and liquidity, EURUSD’s slip this past week is seriously weighty. The break below 1.2175 cleared out support and curbed the bull trend from the end of March. A full reversal still requires a firm motivator which may or may not arise from the event risk ahead. From the US docket, the CPI and consumer sentiment survey are most prominent. As for the Euro’s own calendar, the European Central Bank (ECB) decision certainly stands out. That said, the expectations for this group to make any serious changes in their course is set low – which could in turn amplify the response to any actual alteration. As for market view, retail FX traders from IG reduced their short exposure significantly after Friday’s slip which in turn pushed the balance to a near 50/50 balance. 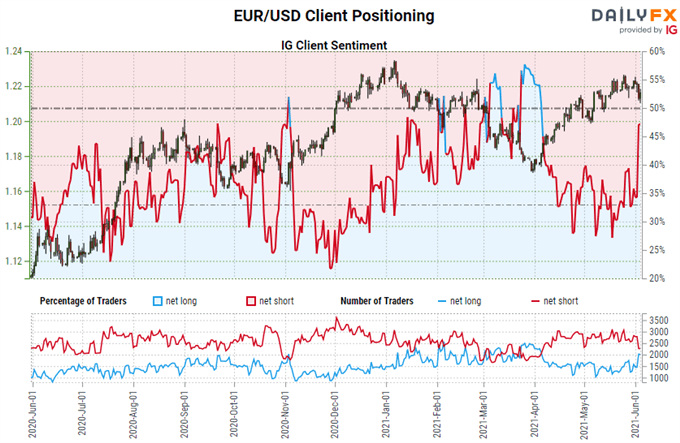