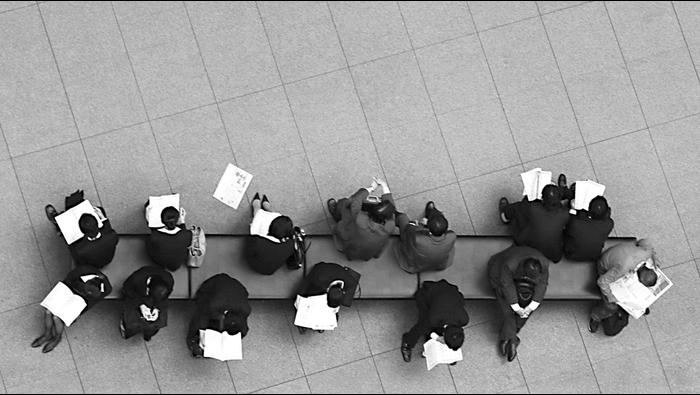 While the most recent wave of diamond hands may not be totally over – see meme-stock’s volatility in late January or the second phase back in March – market participants who have actively joined the fray in retail momentum have experienced the burn that comes with extreme volatility. The tickers that have crowded out the headlines of late printed extreme changes across frequent updates Thursday, but the baseline of sentiment that I was following was from the more stoic S&P 500, Dow and Nasdaq 100. It is precisely the restraint of these benchmarks these past few weeks that made the otherwise modest technical break on the New York open stand out. So close to record highs, the market would resolve a week of constricting range with a bearish break rather than a move to new bullish territory. Ultimately, this is a break that follows the ‘path of least resistance’, so it doesn’t necessarily override the market’s general restraint to signal a full-tilt bear trend. However, with NFPs on tap while the market is considering its position on value and Fed intention, the ‘risk’ that the market commits to a decisive move is higher than its been in some time. 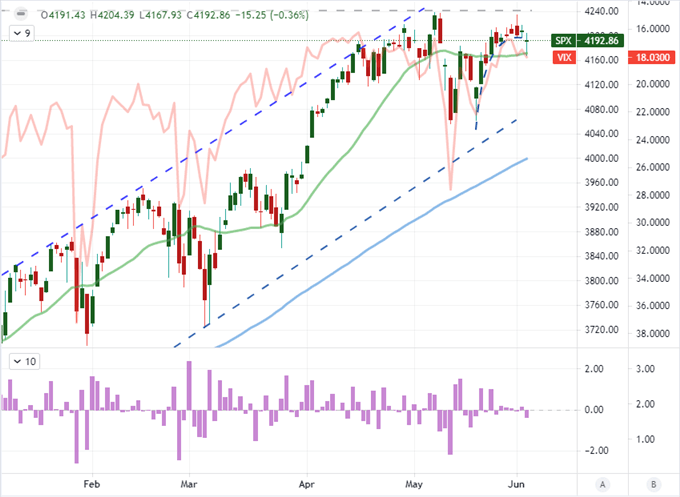 At the more extreme end of the risk spectrum, AMC’s extraordinary volatility remains a highlight. The (current) favorite meme stock was down as much as -40 percent on the day, but after a number of intraday swings, it would end down approximately -18 percent. For those that insight on finding a traditional fundamental reason for this course, we could point to reports that the company once again has filed for permission to sell another 11 million shares. In normal circumstances, this could certainly be a significant pressure on the stock; but this is more likely a result of the extremely volatile backdrop. With this retail beacon sliding, the more nascent lift for the likes of Blackberry (BB) and Bed Bath & Beyond (BBBY) were similarly in retreat. While retail contemplates its next move and the S&P 500 attempts to recover its balance, not all risk measures are suffering the same crisis of faith. The German DAX and Australian ASX 200 indices are pushing fresh record highs and Yen-based carry trade crosses are holding up well. Don’t misinterpret volatility in certain areas of the market for conviction throughout the financial system. 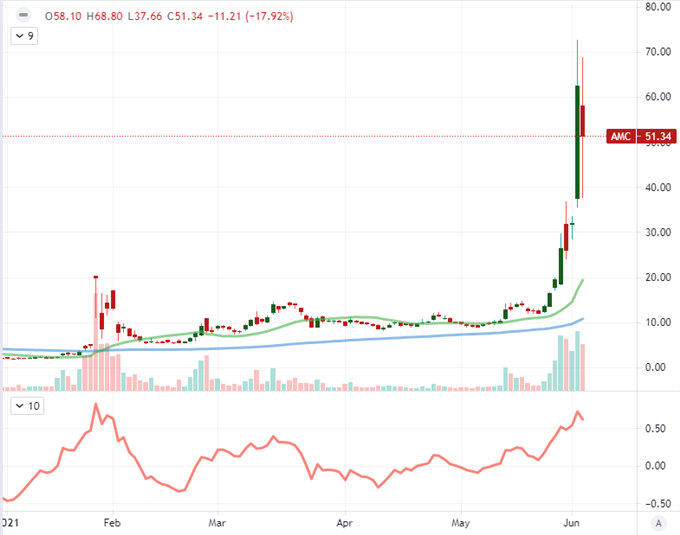 As we monitor the general view on ‘risk trends’ for exposure and opportunities, I will follow different outlets for opportunities that are better served for restrained volatility and those that stand to take full advantage in the event of absolute conviction. The emerging market currencies I’ve been following this past week is floating somewhere in between these two states. There is no mistaking the impressive bearish progression of USDBRL and USDZAR these past months, but the rebound from the Dollar has served to at least curb their momentum. In contrast, a rebound from the Greenback has accelerated the USDTRY counter-trend advance with a decisive break (with a daily close) above 8.6000 after an intraday reversal highlighted indecision. This is a pair to watch in particular with the debate over monetary policy effectiveness under growing scrutiny.

Chart of USDTRY with 20 and 50-Day Moving Averages (Daily) 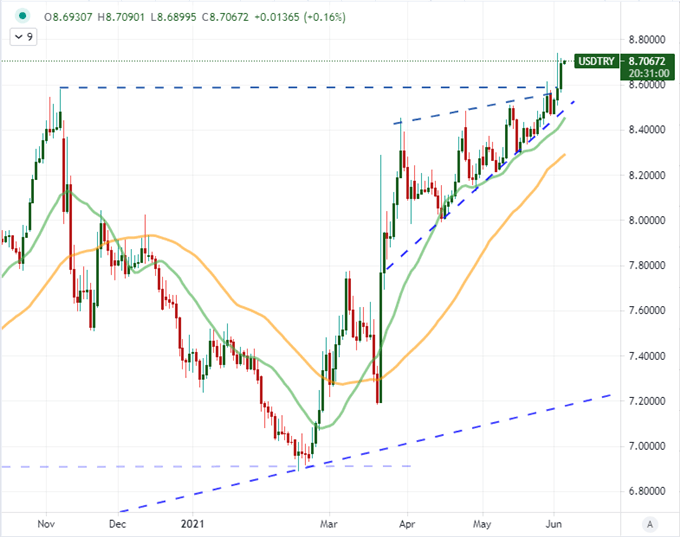 What is perhaps remarkable from this past session is falter in investor confidence despite a run of data that generally impressed. While there were emerging market PMIs, Australia trade data and a Mexican consumer confidence survey among other event risk; it was the US docket that really stood out. The data fell into two general categories: employment and growth proxy. For the latter, the ISM’s service sector activity report for May is a closely watched indicator that is treated as a timely update on the health of the world’s largest economy. As such, the better-than-expected 64.0 reading – a series record – reinforces confidence in the economic backdrop. At the same time, it undermines the reticence from the Fed to withdrawal its extreme monetary policy accommodation on the basis that the outlook faces risk of economic recidivism. Consequently, a favorable economic indicator can generate a speculative concern. 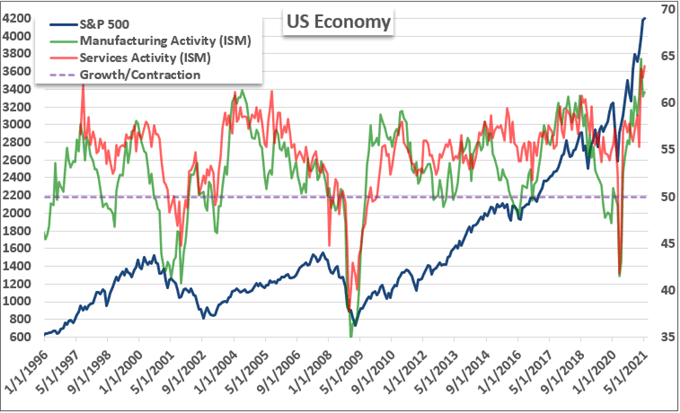 The ISM figure wasn’t the only data point that was building on speculation that the Fed may soon turn on its signal to exit the stimulus highway. A run of employment data also hit the wires this past session. The initial jobless claims for the past week slipped to 385K while job cuts increased to 24.59K, but it was the ADP private payrolls for May that carried the greatest impression. The report significantly beat consensus forecasts with 978,000 jobs added to the economy. That will significantly raise interest and consequence for the official May labor statistics from the government Friday. For those that don’t recall, the change in NFPs last month sharply missed forecasts and unnerved the markets. Investors and traders alike will be watching for the surprise quotient in the data. Yet, if Fed speculation is taking serious traction, it is the wage inflation numbers that should be monitored most closely. 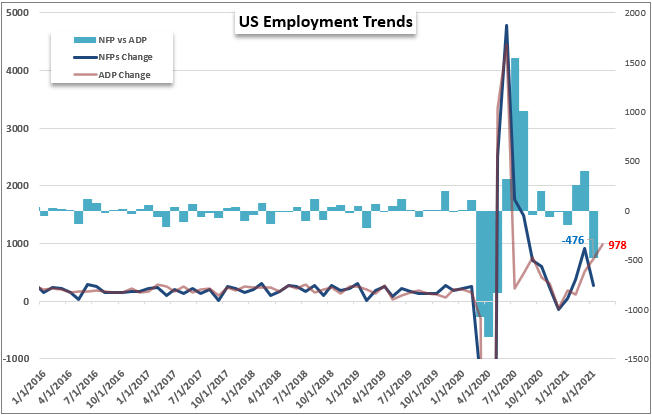 When it comes to risk oriented assets, a better or weaker outcome can have a dichotomous impact on the markets. A favorable reading for economic health may be overlooked for its encouragement of the Fed to withdrawal its excessive support. Alternatively, a miss that weighs the GDP forecast can urge near-zero rates and asset purchases for longer. The Dollar on the other hand stands to benefit from an outright bullish outcome and suffer for a bearish result. With a shift forward in rate hike timing, the currency benefits the projected carry appeal. Should capital markets slump at the same time, it will further leverage the USD’s safe haven status. Alternatively, a weak print – particularly one that rallies assets like equities – will likely cut down the DXY’s nascent bullish breakout effort. 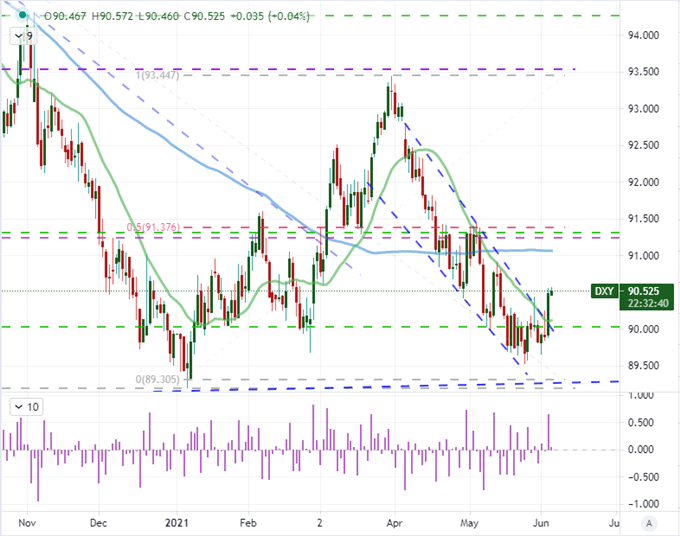 Many of the ‘majors’ have an interesting technical backdrop. EURUSD has broken trendline support at 1.2150, and AUDUSD cleared support on a head-and-shoulders pattern at 0.7700 while GBPUSD stopped short of clearing the floor of its range around 1.4100. There is potential for additional volatility to mark breaks or reversals for each of these crosses. However, my interest is particularly trained in on USDCAD. This particular pair did not break from three weeks of consolidation, but it is overdue for resolution. To make things even more interesting, Canada will report its own May employment data at the same time as the United States. The potential is very high here. 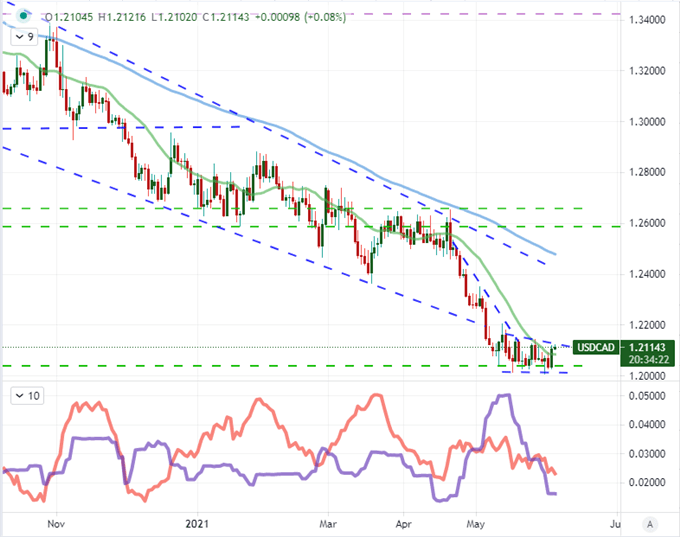