A New Week, A New Opportunity to Stir ‘Risk Appetite’

This past week closed out to an acutely reserved backdrop in market activity. While there were plenty of highlights – Dollar volatility, AMC’s epic weekly rally, a Yen cross surge – the undercurrent for the financial system was one of restraint and reticence towards responding to meaningful fundamental developments. As usual, the US indices stand as a great contrast to the dichotomy of market’s activity and its potential. The S&P 500 carved out one of its smallest 5-day (1 trading week) historical ranges since before the pandemic collapse back in February 2020. On the other hand, the index is within easy reach of a fresh record high and has made little threat to break the steady bull trend channel that has developed these past 15 months. This leads me to a belief that while the prevailing bias for this guide on market sentiment is bullish, potential is far more potent should we head lower with such a lopsided run – particularly against the backdrop of disparate fundamentals. 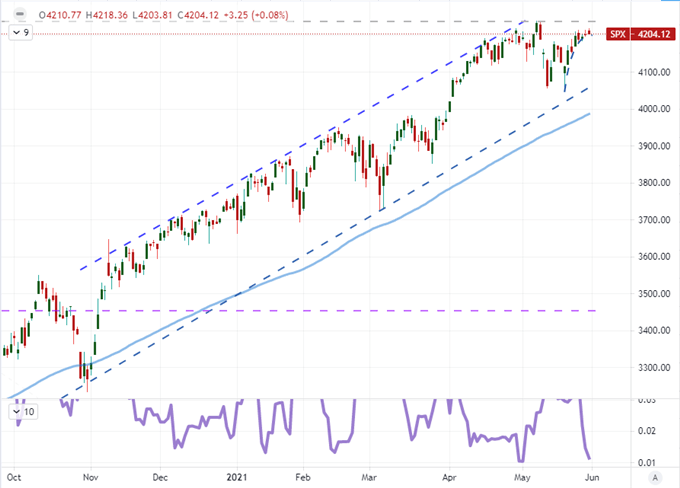 While risk trends seek a motivation for conviction throughout the financial system, there remain certain markets that are drawing extraordinary attention from the new entrants. There is a scale of speculative asset lately that seems defined by both diversification and age. For the Nasdaq 100 for example, which is concentrated in the largest tech companies’ shares and was a leading risk vehicle for the past five years, we have found the same struggle as the broader ‘market’. Through a different filter, the BUZZ ETF which was created by VanEck which combines 75 large cap stocks which receive the highest degree of positive sentiment via social media and other online sources is riding off a remarkable recovery this past month but still well short of record highs. Then there is the single point ticker of AMC. The cinema operator’s stock was up as much as 200 percent through this past week but settled at a ‘mere’ 164 percent gain over the five-day period. This outpace all other meme stocks operating with the same scale of volume and market cap. There seems a clear appetite for risk seeking, but a limited capacity to achieve significant lift. This pushes favor towards thinner markets for sharper price response. Beware the appeal of such volatility. New traders are just as readily drawn by the alure of quick profits as anyone and there are other, experienced predators in these markets looking to take advantage of situations like this. Both forces can quickly lead to collapse for AMC. 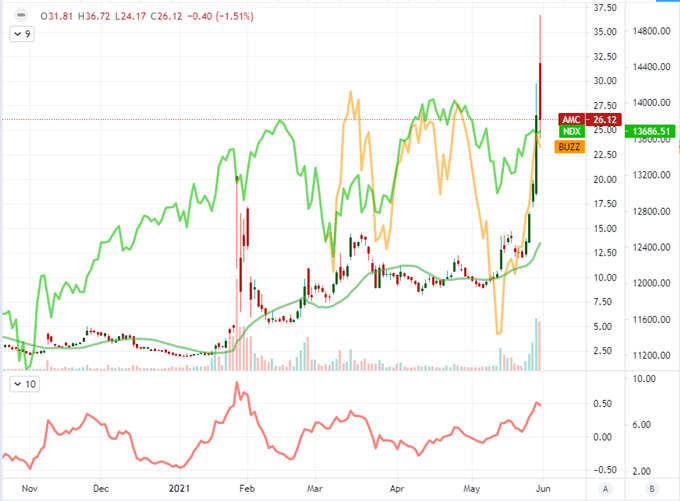 Shifting focus from the narrow view of intense speculative appetite to the broader picture of the financial system, there seems to be an unmistakable downshift in volatility and volume that seems to usher in an early start to the ‘summer doldrums’. Historically-speaking, June is the most reserved month of the calendar year according to the average performance of the VIX since its inception. Volume from the same source (from the S&P 500 like the volatility measure) finds a trough two months later but is nevertheless unmistakably deflated through June. I do not think that we are calling such an early start to a three-month span of market activity. Benchmark assets are trading far too aggressive relative to underlying values and circumstances are such that the backdrop seems ripe with cracks (monetary policy, a skew towards retail inexperience in market participants, extreme low rates of return) to justify stability. This seems not a question of ‘if’ but rather ‘when’ we come to the next retrenchment. 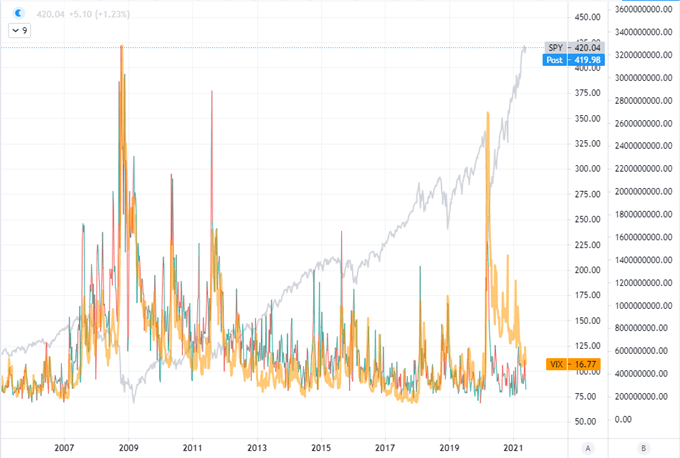 The Star Players for the Week Ahead

Looking ahead to the new trading week, the first thing to consider is the curb on Monday activity. With the US and UK markets offline for an extended holiday weekend, there will be a significant gap in the continuum of speculative momentum potential. Nevertheless, later in the week, we are likely to return to the dominant fundamental themes – one of which is the speculation surrounding the future of monetary policy that holds serious corollary to the decisions made by the Federal Reserve. The US central bank’s favorite inflation indicator (the PCE deflator) hit 3.1 percent on the core measure. That is the highest since 1992. Such a reading in normal conditions would have inspired the FOMC to hike at the next meeting, but the group is concerned about the pace of recovery and their influence over the financial system. The ‘transitory’ view is likely to remain in place for the timing being as there is no urgency on the docket to spark panic of imminent action so soon before the next rate decision (less than two weeks away). The DXY briefly broke its descending trend channel this past week, but liquidity pulled it ack into line. We’ll see if data like the ISM service sector survey or May NFPs can charge this currency next week. 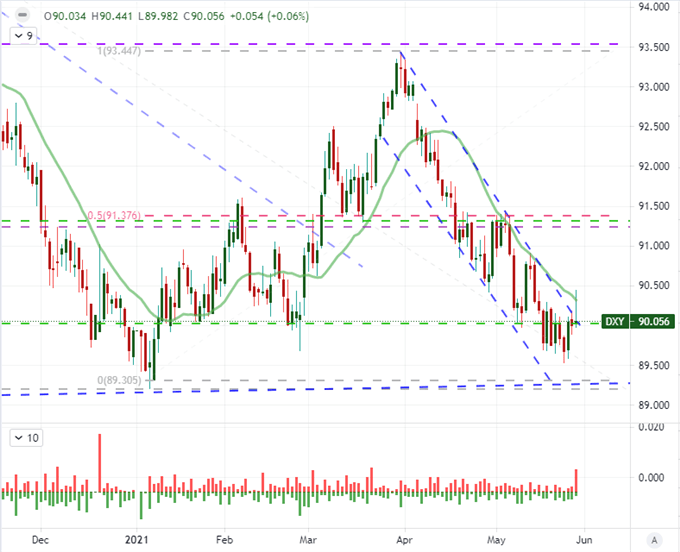 If I were to point to a particular currency (or region) next week that carries the heaviest run of scheduled event risk, it would be the Australian Dollar. That is interesting considering the technical picture of the many crosses this currency represents. While there are many listings on tap, the top considerations through the week are the RBA rate decision on Tuesday morning and the Australian 1Q GDP release on the following day. These two events carry serious potential given the reaction to the Bank of Canada’s modest taper last month and the economic impact from the confrontational position with China this year. There are a host of interesting patterns among the Australian Dollar crosses, but AUDUSD remains the most interesting. There is a head-and-shoulders pattern with a neckline round 0.7700 that has developed over the past month-and-a-half. Yet, that happens to fit into a much larger head-and-shoulders with a bigger bull trend to precede congestion and a floor around 0.7550. 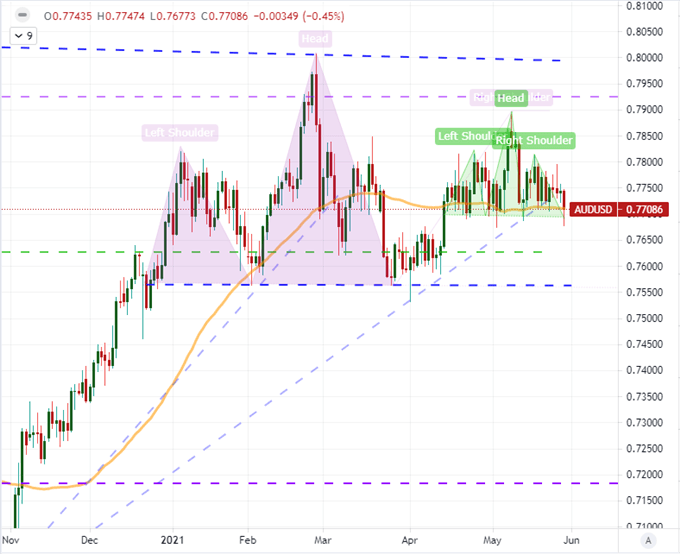 In the off chance that risk trends continue to tread water with extraordinarily restrained market conditions, there are a few markets and assets that may deserve a closer look from active traders. As a group, the emerging market contingent is of particular interest. EM currencies have been on an extraordinary run lately which seems to be an amplified reflection of the risk appetite that has itself stretched remarkably far. With event risk that includes Brazil, India and Turkish 1Q GDP; there is no doubt cannon fodder should the data draw surprise. For a technical-only perspective, I am particularly interested by GBPJPY. Yen crosses at large rallied through the close of this past week, but that added pressure has few competitors when it comes to the most put-upon crosses relative to GBPJPY. This cross is now at the midpoint of its incredible 2011-2015 bull wave, the range high back to 2018 and a trendline resistance that stretches back to its recent record high all around 157. This is a pair to watch…though perhaps on the weekly chart. 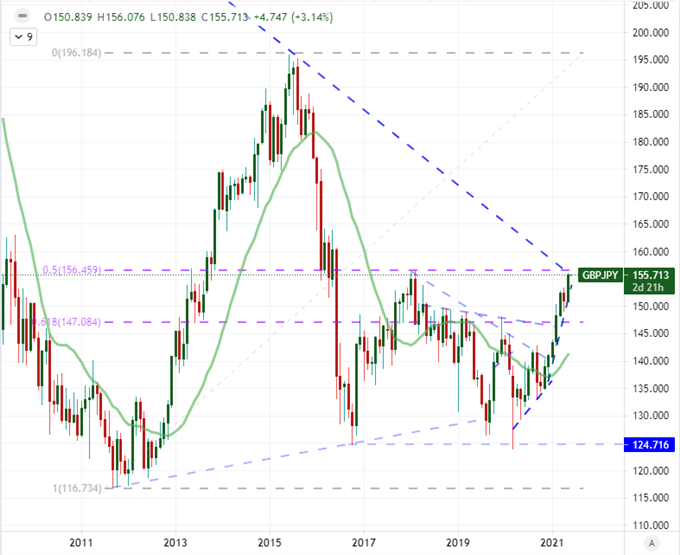