Most of the benchmark risk assets are comfortable with slipping into the warm and still waters of pre-holiday weekend trade, but there remain certain outliers and event risk that traders would do well to track closely. On the data side, Friday’s US PCE deflator touches upon one of the most heavily discussed fundamental themes of the past weeks: inflation and the outlook for Fed monetary policy plans. Meanwhile, there are specific assets that reflect retail interest and unique fundamental interest that seem to be making a concerted effort to overlook the flashing light from the market-at-large. While possible to charge the market in a last-minute surge in volatility, it seems an improbable course; and these exceptions to the rule are far more likely to see the market dry up beneath them. For a baseline of activity across the market, the S&P 500 joined the Nasdaq 100 in carving out an extremely restricted trading range this past session. The span over the past three trading days was the smallest we’ve seen since December 2019 – the combination of holidays and quiet pre-pandemic period. While it’s possible the markets may find some heat before liquidity is totally drained, the potential impact is greater in a bearish resolution than bullish given the long-term bullish bias (a balancing move). 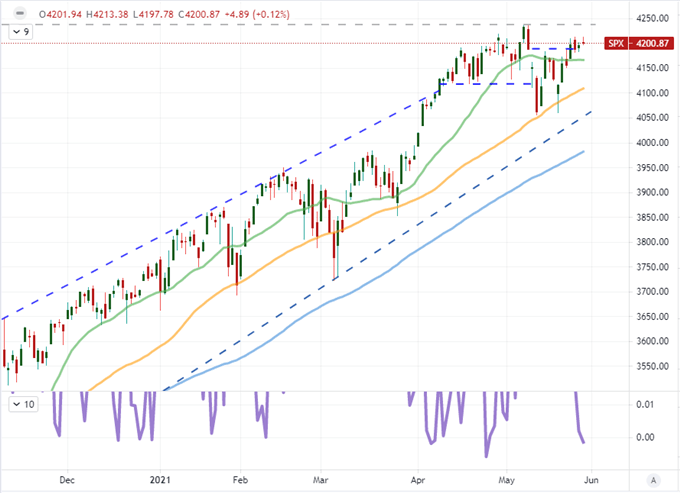 Ultimately, the market conditions we are heading to is a well-known curb in seasonal terms. Historically, June sees the lowest level of volatility of any calendar month for the S&P 500-derived VIX according to history. After the incredible 15-month, stimulus-driven recovery from the pandemic; it is reasonable to expect the market to be cautious in further advance. There is certainly little fundamental discount to point to in order to inspire the ‘money on the sidelines’ that seems to always be available in abundance according to those with a permanent optimism over the outlook. Considering the doldrums often kick off in earnest around this period, it seems this holiday weekend is ready to serve expectations willingly. Again, if we are to break from these statistical norms, it is more likely to occur with a bearish move. 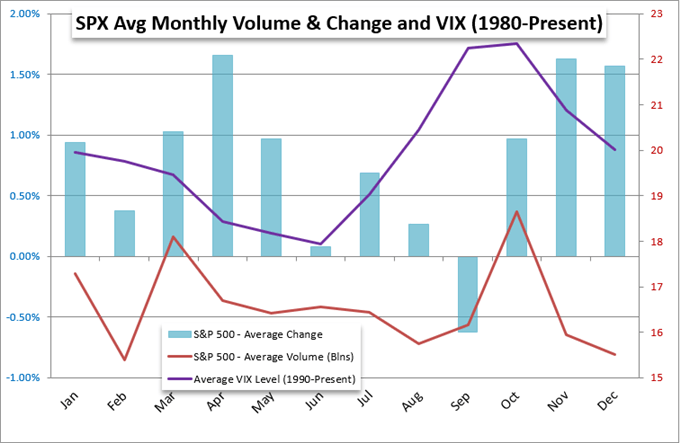 Created by John Kicklighter with data from Bloomberg Terminal

While the broader market is called by the holiday siren song, there are still those traders that are new to trading – or simply looking to press any advantage – and willing to eschew historical norms. Considering cryptocurrencies are still consolidating (perhaps the institutional interest has hit critical mass to trade like a ‘normal’ market), the attention seems to be held on meme stocks. GameStop seemed to fall off the pace however with a ‘mere’ 4.8 percent advance while AMC accelerated. The cinema owner surged another 36 percent for a four-day rally that topped almost 150 percent intraday. This doesn’t look to be deep value but rather a collaborative drive that has pushed volume over 700 million shares turnover. It’s possible to keep this ticker at these levels, so long as investors are willing to hold their leveraged positions for the indefinite future rather than book profit… 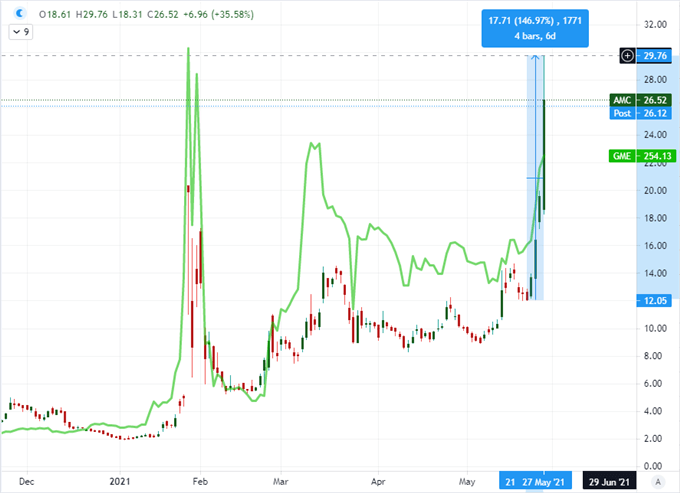 Another remarkable move that came out of the blue was the Yen crosses’ extraordinary charge. USDJPY rallied 0.6 percent Thursday in a move that caught majors observers by surprise. There are usually two reliable catalysts for this pair: risk trends or the Dollar. As we discussed above, there was very limited speculative appetite for assets with such limited response like carry trade. As for the Greenback, the currency eased back against most counterparts this past session. So, this was one of the rare times that the Japanese currency was taking matters into its own hands. This is genuinely a very unusual turn of events in the FX market – particularly when it is not exactly clear what drove it. There is some speculation that the MSCI’s de-listing of Japanese company tickers from the World Index and I remember the days when the Ministry of Finance and Bank of Japan intervened on behalf of the currency. Regardless, if the market doesn’t come to agree on what leveraged the move, follow through will be very difficult to muster. 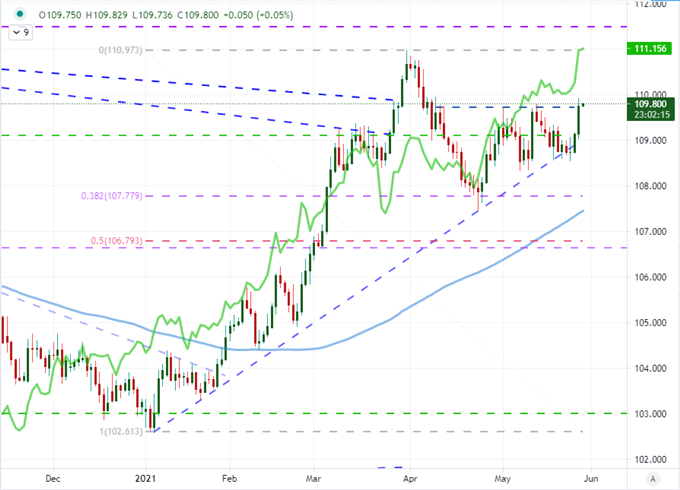 How Attentive are Risk Trends to Inflation Trends? Friday’s Top Event Risk Will Show Us

Looking through the final full trading session of the week, there is one particular event that stands out as a capable candidate for generating last minute volatility: the PCE deflator. A derivative of a run of data from the Bureau of Economic Analysis that tracks consumer income and spending, it is the Federal Reserve’s preferred inflation indicator. The so-called ‘core’ measure which strips out volatile items hit a 1.8 percent annual pace in March and expected to accelerate to a lofty 2.9 percent tempo in this latest update – well above the central bank’s target. While the Fed can absolutely live by its ‘transitory’ claim on price pressure on just one data point, markets will grow increasingly unnerved. I find it remarkable that lately there have been many more voices that state confidence in the FOMC’s views when over the past 10 years skepticism was extremely engrained. Speculation tends to support views that benefit the masses. 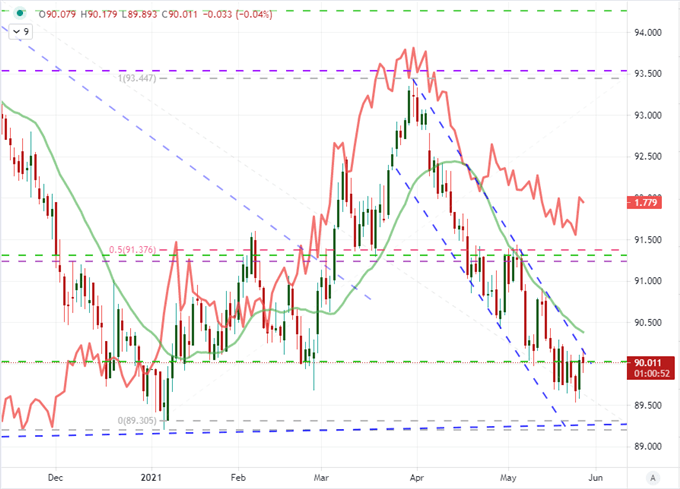 If the PCE deflator does accelerate to the lofty tempo forecasted by economies – and especially higher – there will be a significant uptick in speculation that the Fed cannot be so sanguine about the charge in costs for goods and materials. All the remarks from various board members and Fed presidents this past week that suggests they could start discussing tapering soon will quickly find their way back to the top headlines. Whether or not this data can sway the markets so close to the Friday close remains to be seen. I would put more weight on the Dollar’s sensitivity versus risk benchmarks like the S&P 500. If the data is notably short of expectations, the DXY’s stall at the top of its channel this past session will could push it readily back into its seven-day range. For pairs like EURUSD, that could be practical – though perhaps not particularly large a move. If the inflation stats rouse further fear and doubt of the central bank’s ability to hold fast through the next two meetings (two weeks from now, a meeting on July 28th or the Jackson Hole Symposium in August), an attempt to revive a rally like USDCAD’s could be interesting. That said, I would expect more traction when liquidity returns next week, if there is any to be found. 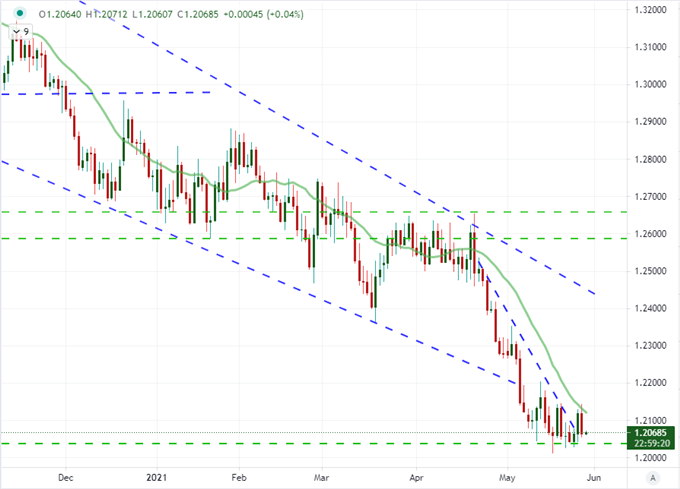