So much for that S&P 500 technical break on Monday. The advance above 4190 to start the week theoretically cleared two weeks of range resistance, but the accomplishment didn’t exactly resonate across the financial system. That lack of fanfare led to a modest retreat this past session which paints the previous accomplishment as being essentially irrelevant. Heading into Wednesday trade, the lack of follow through shouldn’t exactly surprise. Market conditions – which I hold separate from technical and fundamental analysis – reflect a backdrop with restrained volume and little capacity for systemic redistribution of capital seeking greater returns. For event like the Fed chatter this past session or technical milestones to catch serious traction, a market’s aptitude for establishing trends should be supportive. As such, I will continue to eye markets with skepticism when it comes to trends or breaks with significant follow through in favor of congestion until evidence suggests otherwise. 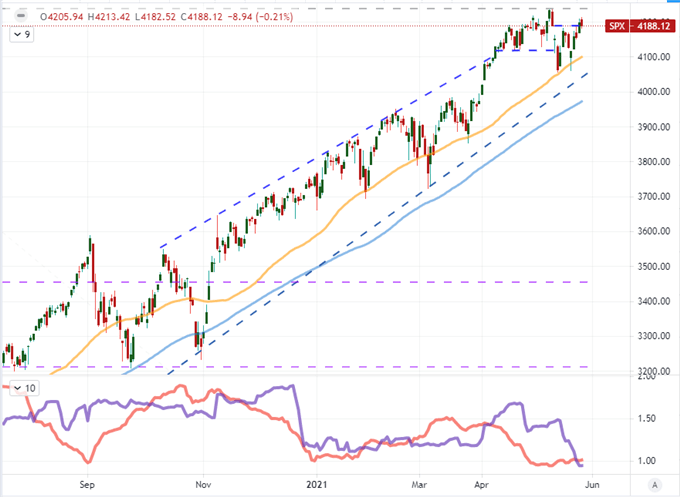 As I have referenced already this past week, there is good reason to suspect the markets will struggle to make serious headway. Aside from the modest listings on the economic docket over the next 24 hours and rest of the week as well as the structural stretch for explicit risk assets like US indices, there are the seasonal expectations. Historically, May is the second most restrained month for volatility derived from the VIX with June the absolute trough. Performance-wise, June for the S&P 500 is the second worst calendar month for returns back to 1980. Of course, there are the outlier years where circumstance flips those norms, but I’m still waiting for the disruption. 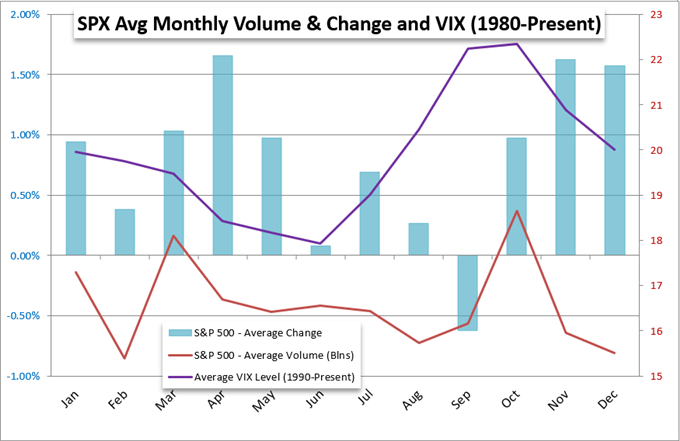 Now, just because markets-at-large are not broadly rising with the same gusto that defined the post-pandemic recovery phase doesn’t mean that speculators are not seeking out opportunity. Appetite for Dogecoin for example picked up through the early part of this month as US indices shifted into congestion and the Nasdaq lost altitude relative to value indices. Yet, the crypto markets have lost luster these past weeks with regulator and tax authority pressure along with fatigue from celebrity references. Where does the risk appetite move next? Apparently, back into the meme stocks that defined the current rise of retail back in January and February. While GameStop was putting up an impressive performance, another of the most heavily shorted stocks targeted by Reddit boards months ago, AMC, would top the charts. How long will this leg last if the rest of the market doesn’t at least back the enthusiasm?

Chart of AMC Overlaid with GameStop and Bitcoin (Daily) 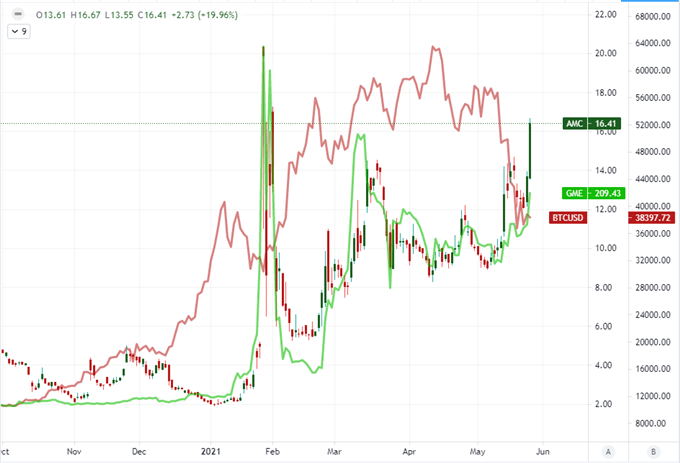 Some Taper Talk and Inflation Speculation

For the economic calendar this past session, the scheduled data was focusing on confidence figures. The US consumer confidence survey from Conference Board unexpectedly eased to 117.2 against a downwardly revised 119.2 in April. Against the German IFO business confidence figure improvement, a market participant could have drawn a conclusion that the contrast was a principal motivation for EURUSD moving up to 1.2250. I doubt that was truly the case though. For the Greenback, the return of inflation speculation and taper talk carries greater weight. Two Fed officials touched upon the market’s underlying fear of losing their absolute support from the central bank. San Francisco Fed President Daly remarked that while she believed inflation was transitory, they are “talking about talking about taper”. Vice Chair Clarida was a little more direct with his suggestion that discussions of normalization could begin in “upcoming meetings”. The market has shown its interest/concern over this inevitability previously, but we seem to be in a period of complacency at the moment.

Google Search for ‘Taper’ and ‘Inflation’ in the US (Monthly) 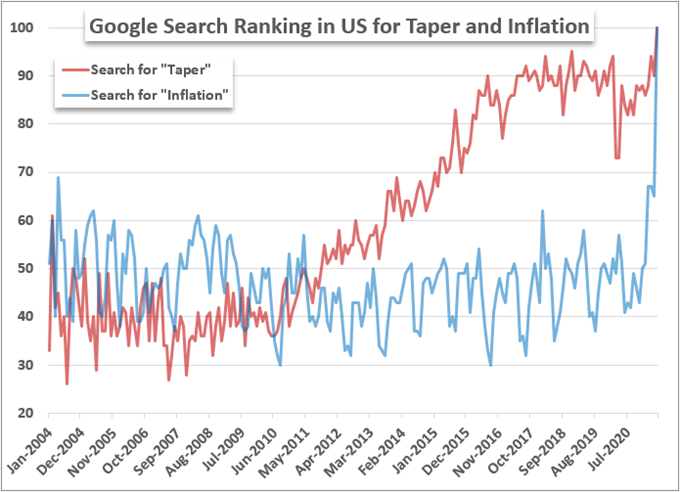 Created by John Kicklighter with data from Google Trends

For the Dollar, the lack of attention afforded monetary policy speculation means the boost the currency could draw from a relative forward yield advantage or even a safe haven bid is rendered inert. The DXY Dollar Index slide to a fresh close low that stretches all the way back to the beginning of January. We still have some distance to close before we reach support that has held the currency up for years, but it is not much room. Meanwhile, implied rate forecasts from Fed Fund futures out to the end of 2022 have eased to 13.5 basis points of tightening – a 55 percent probability of a standard hike – and the US 10-year Treasury Yield dropped back to 1.56 percent. 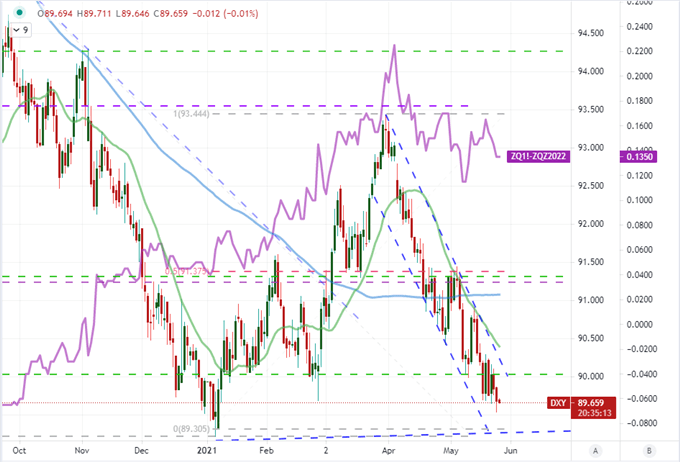 For a top candidate for imminent breakout (non-directional) potential on my list following USDCNH’s break of 6.41, USDCAD looks to be quickly running out of room before a decision has to be made. The 1.2025 floor stretches back as range support to January 2015 and a midpoint of the past decade’s range. The tempo of the past month puts a particular spotlight here. Yet, what is truly remarkable is positioning behind the cross. Speculative futures traders (via COT) hold their heaviest net short position since November 2019. Retail FX traders (via IG) on the other hand continue to build up their long exposure with a net bullish view running in the 85 percent region. A break is very likely over the next 24 to 48 hours; but unless conditions change, it is likely to struggle with persistent follow through. 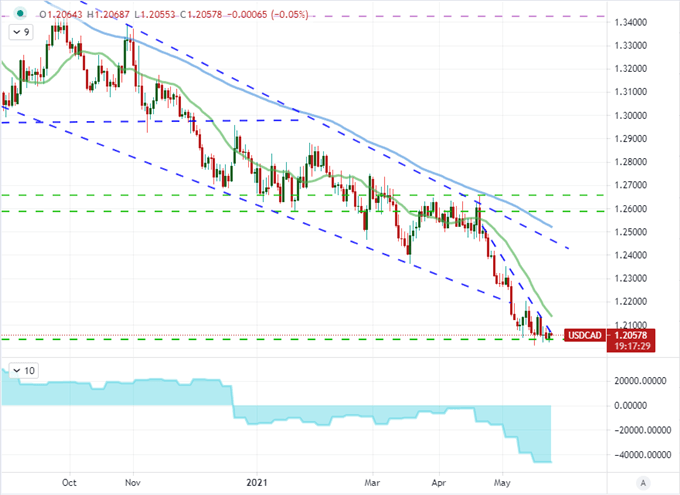