Dollar Recovery and Risk Shudder After FOMC and Crypto Headlines, What's Next?

Did You Feel That?

Risk assets convulsed this past session amid an unmistakable intraday crash in major cryptocurrencies along with FOMC minutes that suggests the bank’s ability to ignore inflation is not as absolute as they have made out recently. As far as catalysts go, these are weighty matters. However, the backdrop we are fighting against is the stubborn complacency that has weather numerous headlines and data releases these past months to fend off the establishment of a comprehensive trend. Sparks do matter, but it is the backdrop and the collective’s propensity to fall into a true sense of fear or greed that more often determines whether we find ourselves establishing a genuine trend. The split as I see it at the moment is not whether the ‘buy the dip’ effort has recharged bullish interest or tentative technical breaks on various ‘risk’ assets will usher in a global bear wave. Instead, I’m looking to see whether the market is ready to commit to a genuine trend or continue to tread water. While Bitcoin may some serious progress – not to mention volatility – the likes of the Nasdaq 100 and DXY Dollar Index are still comfortably within established trends. 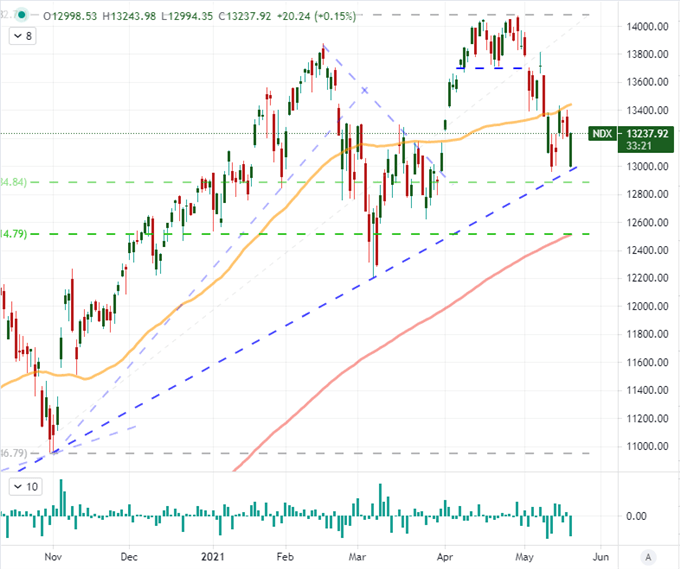 While there are those that would make the argument that Bitcoin and other major cryptocurrencies are anti-fiat or carry a fundamental bearing of similar magnitude, they are still treated by many as speculative assets. If the bulk of a market exudes the traits of traders who are seeking volatility, operate with short-term holding periods and hold little of the absolute commitment so often associated with the HODL mentality; the asset in question will reflect those features in how it moves. We saw a glimpse of that this past session. Bitcoin has slowly been in retreat for the past few weeks – slowly being relative – but the break of a prominent head-and-shoulders pattern gave chart watchers something to grow nervous over. With China’s recent crackdown on crypto transactions, Tesla pausing its acceptance of Bitcoin for purchases and the US Dept of Justice investigating exchanges; there was also fundamental fodder to grab onto. Yet, the sheer intensity of the intraday plunge this past session seems more the result of key exchanges going down and leveraged accounts being margined out. At its worst, Bitcoin lost -30 percent intraday, Ethereum -45 percent and Dogecoin -55 percent. 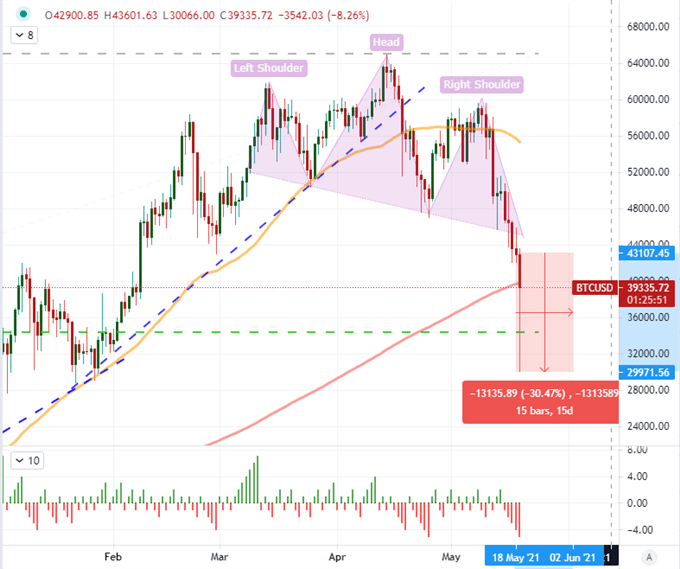 To the outside observer, the Fed’s rhetoric is about as vanilla as can be imagined. Their reiteration of an extremely accommodative monetary policy stance through the foreseeable future and refusal to entertain discussions for a timeframe on normalizing seems as clear a dovish message as is possible to muster. However, there is context in what seems a boilerplate statement; and in that nuance is a financial impact that can dramatically alter the course of the markets the further out you look. It is against that backdrop that the minutes to the decision on April 28th were filtered through and registered as ‘hawkish’. The offending remarks suggested “a number of participants” believed a continued strong recovery could make “appropriate at some point in upcoming meetings to begin discussing” the taper plan. Further, it was suggested via a survey a belief that asset purchases would end three quarters after the first taper and a further three quarters would bring the first rate hike. There is a clear lack of certainty here, but when you operate in absolutes (such as suggesting normalization is absolutely not ahead), admission of doubt creates stronger market responses.

Search Interest in the US for ‘Inflation’ in Google Trends 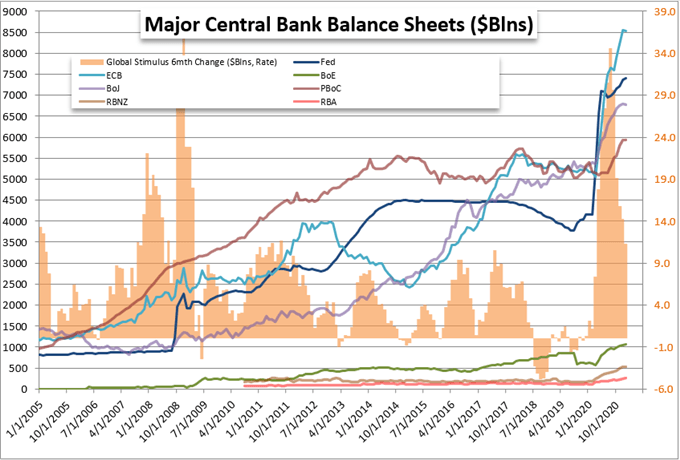 Chart Made On Google Trends

In response to the markets interpretation of the Fed’s expectations, both the US 10-year Treasury yield advance (2.3 percent to 1.675) and the implied rate forecast in Fed Fund futures through December 2022 would also jump (10 percent to 16.5 basis points of tightening priced in). Begrudgingly, the Dollar would also find some modest lift. The DXY’s 0.4 percent charge was a meaningful one, but it didn’t exactly change the overall course of the beleaguered currency. The larger eight week descending trend channel is still intact with the 20-day moving average conveniently aligned to the upper threshold. The bullish check on the other hand did pull the benchmark back from the bearish implications of slipping 90. Overall, there is a ‘path of least resistance’ shift here whereby a modest hawkish tilt from the minutes and some safe haven appeal have justified the hold to range. Meanwhile, the pressure will keep building until we need to choose between breaking a multi-year support around 89.25 or putting in for anther big range swing on the bullish side. 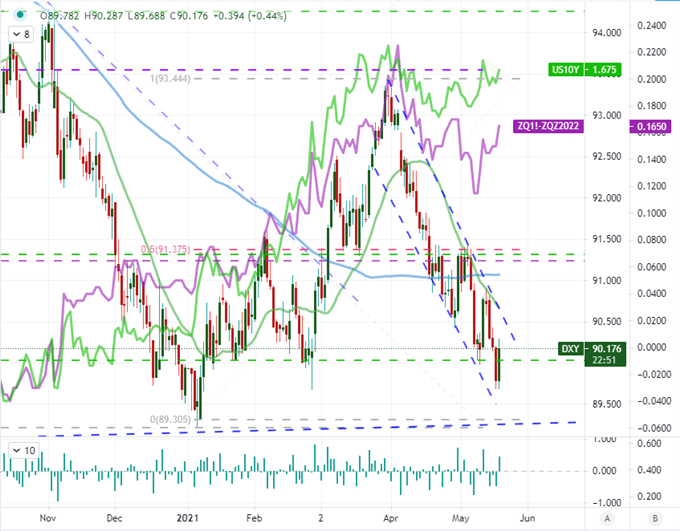 Looking to the Dollar-based majors’ response to the Greenback’s rebound, the EURUSD’s drop looks like the mirror of the DXY move – not surprising given it is the largest component of the trade-weighted index – but the picture is perhaps clearer to the average FX trader. That could be owing to the tentative failed break being a short-circuited bullish move or that more people simply trade the benchmark pair. Nevertheless, the retreat back below 1.2200 drains any bullish momentum that could have come with the break. There was an ECB financial stability report out this past session, but its warning about insolvency risks when stimulus is rolled back didn’t seem to budge Euro elsewhere, so I doubt it contributed much to EURUSD.

Chart of EURUSD with 20 and 100-Day Moving Averages (Daily) 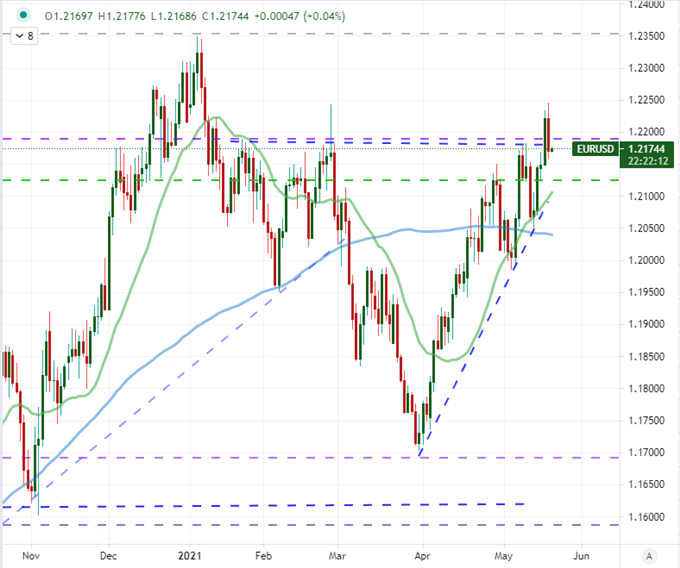 The Cable was yet another pair that found a Dollar bounce to be a convenient reining in on speculative forces before a more substantial technical drive was cemented. GBPUSD managed to break 1.4000 two weeks ago to much fanfare owing to the Pound’s own charge. The much more substantial barrier though is 1.4300 which represents the midpoint to the 2014 to 2020 range and a multi-year range resistance in its own right. The pullback here was even less significant than it was on EURUSD on a technical basis, so what how the market treats this pair in particular for next steps. 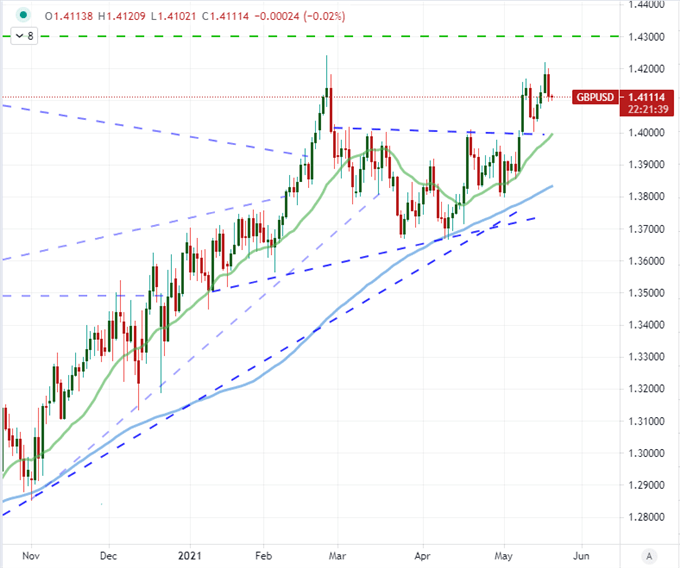 A last mention from the Dollar pairings was USDCAD. The result was the same in a bounce for the US currency, but the technical and fundamental prevailing winds are far stronger. Consider the technical picture where this pair has been broadly trending with bears since the March 2020 top – and there has been a particular acceleration in the past month. The fundamental score explains this charge with the Bank of Canada some weeks back actually tapering its asset purchases – something that the Fed minutes actually made mention of – and consumer inflation stats from Canada Wednesday putting the currency in a position to one-up its larger counterpart. This is one day up on a very aggressive bear trend and I have little interest in attempting to pick bottoms or tops, but there is additional event risk ahead in Canadian private payrolls (ADP) and housing inflation. It’s worth keeping a wary eye on this pair. 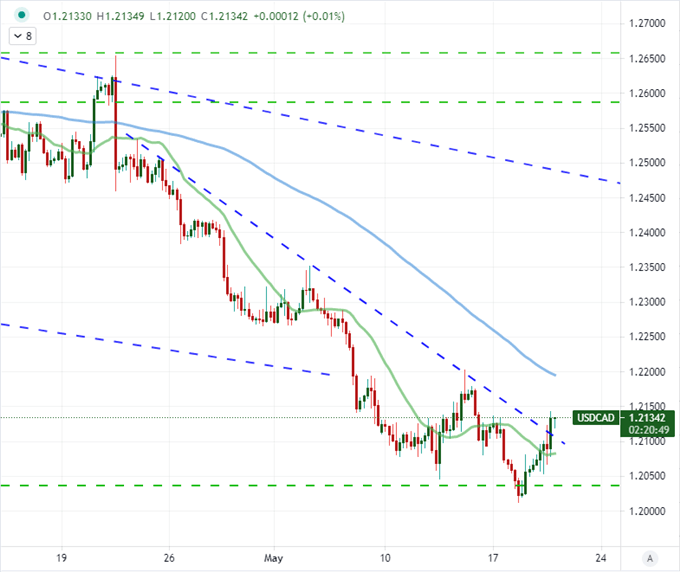