Risk On, Risk Off – Who Has the Reigns?

Sentiment in the financial markets seems to be generally unmoored as we head into the middle of the week. On the one hand, we have a few outlier assets like the EEM emerging market ETF which have put in for a smart jump. Alternatively, one of the most popular of the risk-sensitive assets nowadays, Bitcoin, is diving into its fifth consecutive session loss – matching the longest slide since September 2019 – as it completes a head-and-shoulders reversal. Most of the traditional speculative mix that I like to keep tabs on for a general picture of sentiment meanwhile is scratching out modest movement. That is likely owing to a lack of clarity on a fundamental charge. Later this week, we will have a run of growth-oriented data, but that doesn’t seem to be a signal at present. Instead, it seems the lingering concern of inflation by professional market participants is following the collective conviction around – not enough to throw the masses into a panic, but effectively haunting efforts to rouse a bullish run. 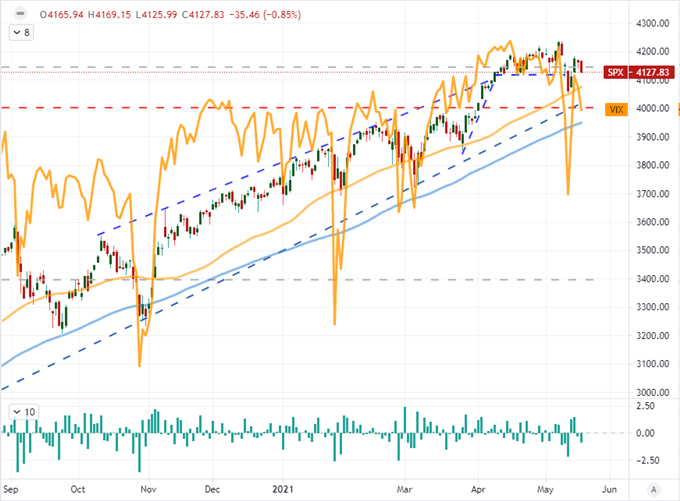 Among the various market benchmarks I like to follow for a more comprehensive view of the speculative spirit sweeping the market or not, there seemed to be both considerable disparity between asset classes and regional performance. From the US indices which tend to have a more persistent lean in favor of the bulls, all three of the main players I watch – S&P 500, Dow Jones Industrial Average and Nasdaq 100 – were down in roughly the same performance: down between -0.7 and -0.8 percent. That leaves the tech-to-blue chip performance highlight between SPX and NDX as a ‘top of the iceberg’ measure essentially unchanged. While the retail crowd sorts its loyalties, professional fund managers surveyed by Bank of America for a monthly insight reflected confidence in a “late cycle” extension on certain areas. That includes banks, materials, commodities and UK assets. Underweighting in tech, utilities, bonds, cash and the US Dollar speaks to the unique state of a mature market with which we are currently dealing. 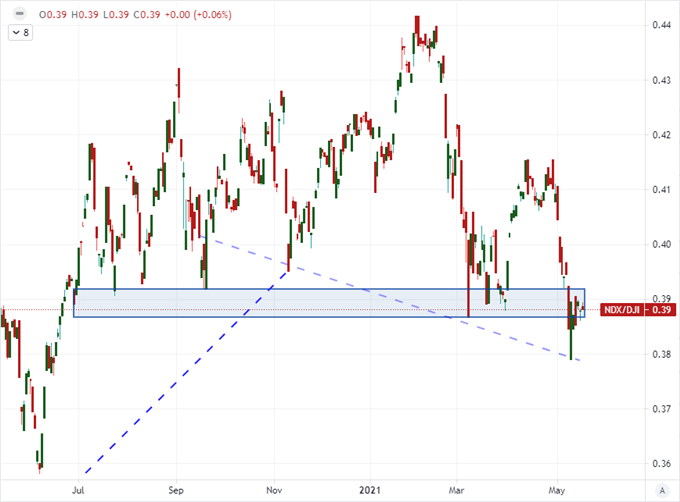 The Dollar Continues to Draw Abuse

While the US indices are still looking for conviction in a particular compass course, there was no mistaking the country’s currency continued to absorb serious selling pressure. The trade-weighted DXY Dollar Index extended its drop below 90 this past session to trade at lows last seen in early January. The January 6th swing low is itself a multi-year nadir for the Greenback and it represents the extension of a shallow-slopped trendline support that stretches all the way back to December 2014. Should we take out that level, it would come with serious consequence and no doubt reverberate even up to the pure fundamental observers. For those looking for the translation to technical milestones in the majors, I would highlight 1.2350 for EURUSD and 1.4300 on GBPUSD as more weighty levels for the single currency to reflect on. 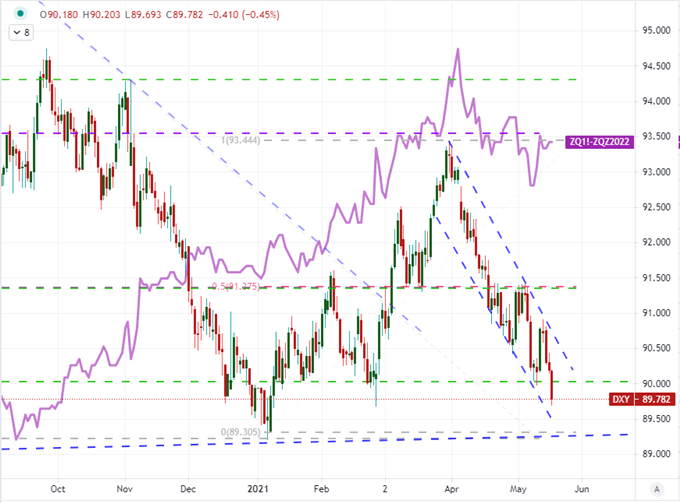 For those keeping track of what is driving the US Dollar, the 5-day correlation coefficient between the DXY and S&P 500 is a robust -0.90 which insinuates the Greenback as a short-term safe haven. Of course, the tumble this past session from the currency while the indices themselves were off diminishes that signal. Further, the 20-day correlation between the two has actually flipped modestly positive. Instead, it seems the inflation chatter from previous weeks continues to trouble this FX stalwart. While risk assets that default to complacency can throttle concern as there is a gap until the next official evaluation period from the central bank, the tangible rise in inflation pressures and the resilience of the monetary policy authority acts to devalue USD. It is interesting to see the din of voices issue warnings from the Bank of America fund managers survey to Allianz’s Mohamed El-Erian while search interest for the “inflation” easing back from its peak high earlier this month.

Search Interest in the US for ‘Inflation’ in Google Trends 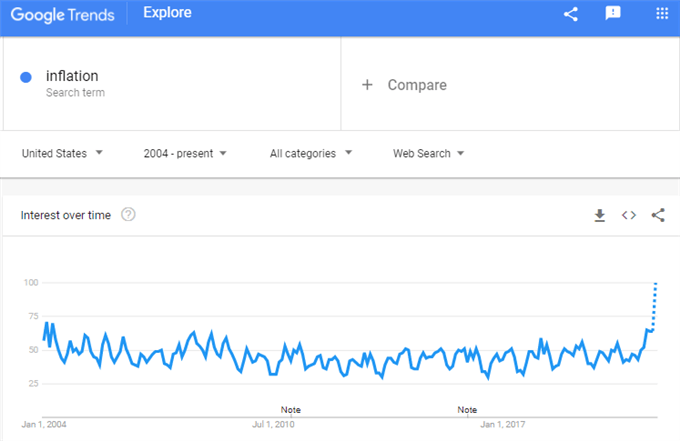 Chart Made On Google Trends

The US Isn’t the Only Country Registering Inflation

Heading into Wednesday trade, there are a few economic events that should be monitored for potential market impact. Top of the US docket for me is the FOMC meeting minutes. This is a boiled down transcript of the previous month’s policy meeting in which the central bank very concertedly refuted the growing concern that inflation was a problem with their ‘transient’ assessment. The recap will not deviate from that outcome, but we can garner more nuance on where their pressure points may be and if there is perhaps more internal debate going on than the remarks of the past two weeks let on. Meanwhile, a reminder of the remarkable contrast between the Fed and Bank of Canada’s recent paths will be reiterated by Canada’s report of April CPI. Given the BOC actually tapered its purchases, if its own inflation figures offer tangible pressure, it can add to an already incredible USDCAD bear trend. On the other hand, if inflation is absent, it could position the Greenback to take advantage if it can spin its own recovery. 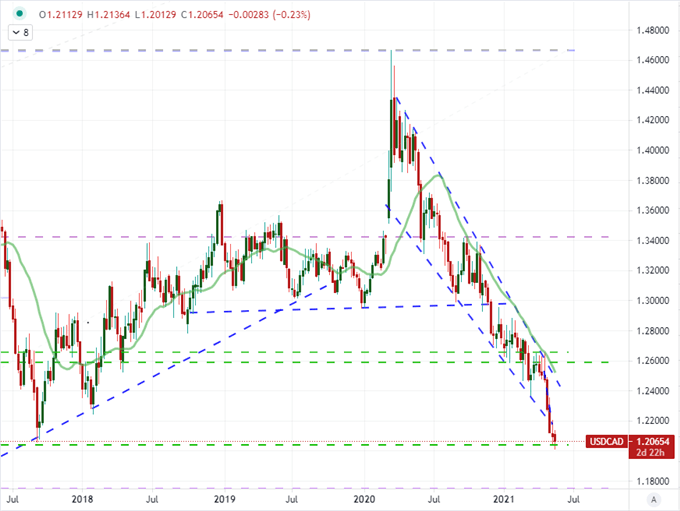 Another Dollar-based cross worth monitoring closely as it deals with comparative interest rate forecasting is GBPUSD. The United Kingdom will report its own run of consumer, retail, producer and housing inflation. With the backdrop of a reopening economy, the Bank of England more contemplative of their policy mix and Cable eyeing resistance at 1.4300 that is range resistance back to 2016 and the midpoint of the past decade’s range; we could see the convergence of waves to forge significant progress or perhaps trip it up at the finish line. 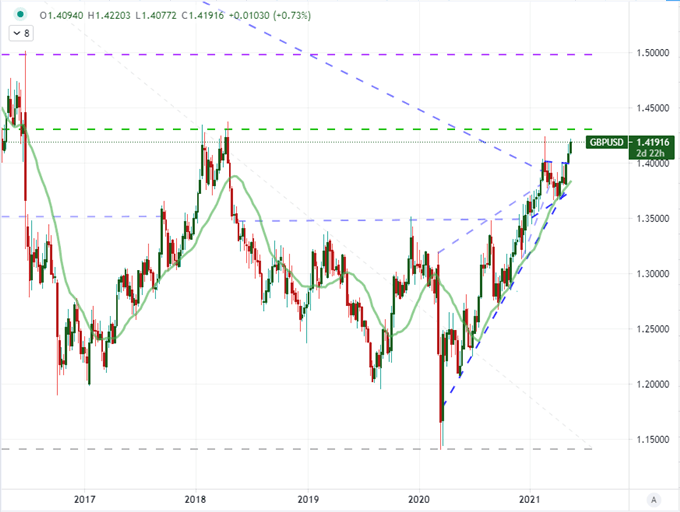 While the Greenback is a good fundamental counterpart when the topic is inflation and interest rate forecasting, it isn’t a necessary ingredient to fall into volatility. Other Canadian Dollar and Pound crosses present their own merits. However, if you combine the two, the result is an interesting and volatile cross. Over the medium-term (past month), the pair has developed an inverse head-and-shoulders pattern which happens to fit in at the bottom of a much larger, multi-year channel/wedge. This pair could be appealing on its own depending on how the data plays out, or it can be an indicator to highlight what nuance may play through in defining inflation and monetary policy forecasting as a key theme ahead for all. 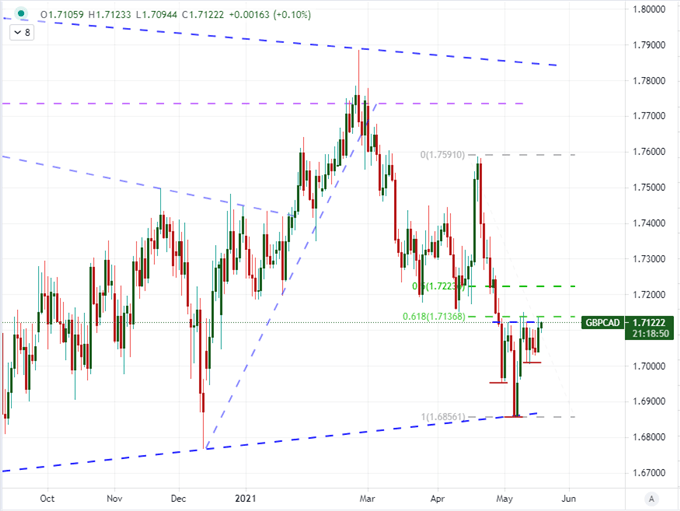