This past week closed out with a notable effort to disarm the imminent threat that was hanging over the market’s head after the US consumer inflation report. Fear gained serious traction through the middle of the week as data showed the Fed’s assurances that escalated inflation would be transient would have to be taken on faith rather than rooted in actual economic data. The concern that the central bank may eventually be forced to act cooled before the week’s end, helped ironically by a disappointing turn from retail sales and consumer sentiment data out of the US. Data considered, I believe the bounce was more a factor of the long-standing ‘buy the dip’ mentality that has charged years of gains in a thinly veiled moral hazard. This criticism, however, doesn’t dictate how markets trade; and the rally from the S&P 500 back above 4,150 Friday has defused at least the immediate threat of capsize. In other words, it will take a day or two of starkly bearish sentiment before we get back to critical break territory – plenty of warning. 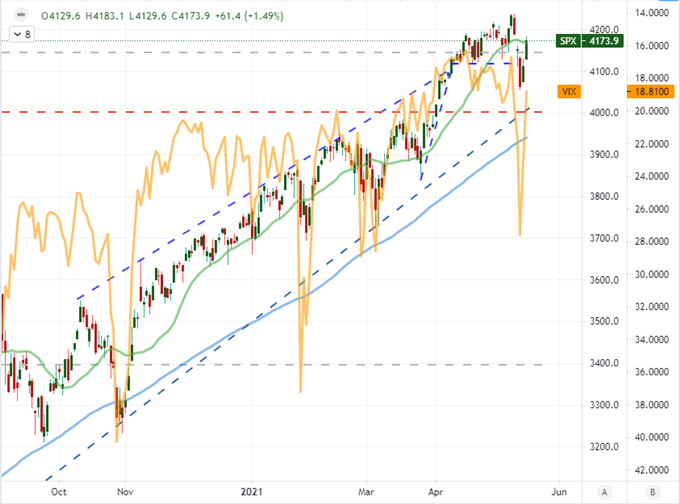 As far as levels for judging something so abstract as self-sustaining risk aversion in global markets, I think there is something to be said about key levels on well-established benchmarks. The S&P 500 is arguably the most heavily traded derivative capital market benchmark across the globe, and it finds significant support in the 4,000 area. Something a little sensitive to the eddies in speculative interest is my preferred ratio of the Nasdaq 100 to Dow Jones Industrial – perhaps one of the most consistent ‘growth’ measures versus the quintessential ‘value’ index. The ratio has established a very explicit head-and-shoulders pattern, which I consider remarkable for the general shift in preference than the distinctness of the technical levels. If this crashes through the ‘neckline’, I will be watching broader measures of risk appetite very closely. 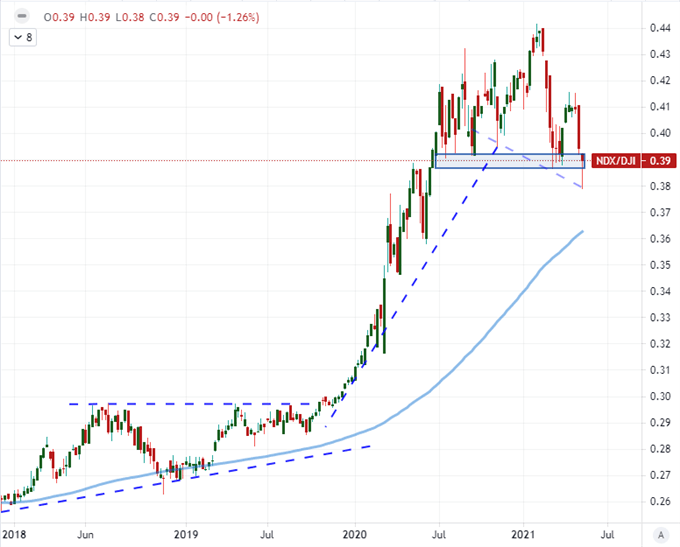 A bigger movement through the end of this week than the jump in US indices was the drop from the Greenback. Through Friday, the disappointment from the retail sales figures (0.0 percent monthly change) and the University of Michigan consumer sentiment survey (down -5.5 points to 82.8 against a forecast of a small increase) throttle the accelerating pace of comparable growth for the world’s largest economy. That in turn reinforces the belief that the Fed can continue to push patience against inflation pressures. Such a mix can bolster equities which look US stimulus first and foremost; but the undermined safe haven status, slowed growth and tempered yield projection all work against the US concern. I will keep tabs on the six week descending trend channel for DXY next week alongside the performance of Treasury Yields and Fed Funds futures. 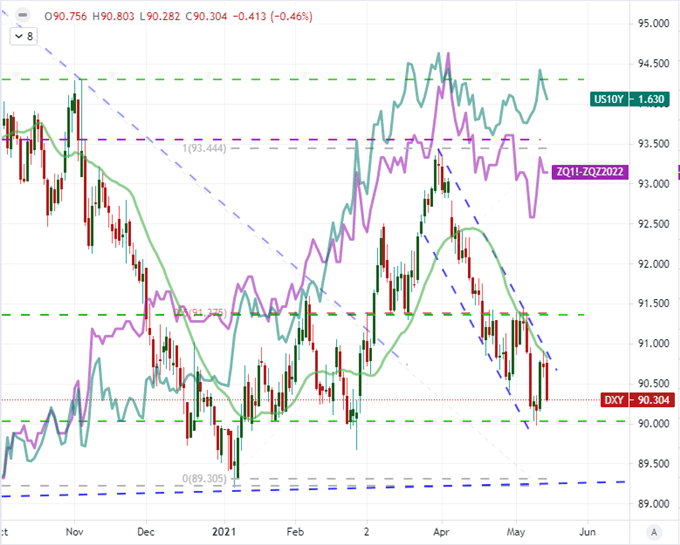 Among the Dollar-based majors, there are quite a few interesting technical and fundamental pictures. I would be remiss to overlook USDCAD as a chart topper on the watch list. This pair was attempting to pull out of its nose dive with a three-day rebound, but Friday took care of that effort. After months of persistent bear trend and a particular three week acceleration in the wake of the Bank of Canada taper, this pair has truly pushed the bearish envelope. There is US and Canadian event risk ahead that include FOMC minutes, US PMIs and Canadian inflation. If anything can meaningfully change the backdrop, the stretched technical position could snap back. Retail traders, through their positioning (via IG), suggest many lie in way for just such an occurrence. 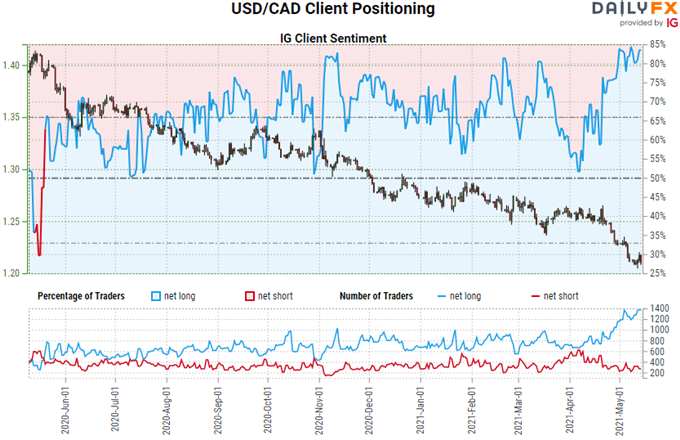 Another pair that will be high on my list next week is GBPUSD. The so-called Cable is bouncing between 1.4300 the midpoint of the 2014 to current range and 1.4000 which was the previous short-term range resistance. Behind those chart guidelines, we have quite the fundamental backdrop. Aside from the US event risk, the UK is due to release data on employment, retail sales and national inflation. Outside the docket, there are concerns that the government may be forced to reverse their re-opening of the economy should Covid variants cause infection rates to start rising in earnest again. 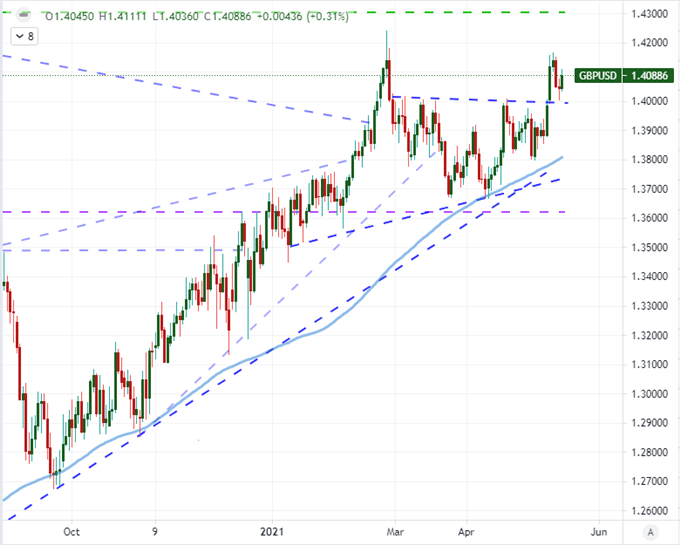 The ‘Other’ Top Fundamental Themes for the Week Ahead

Aside from general risk trends, the carry over of inflation fear (which has additional global data ahead) and particularly interesting technical pictures; there are a few calendar based matters that should be monitored. Growth is one such matter. Retail sales figures are sprinkled throughout the week which can be a productive motivation for regional assets/currencies. If you are looking for a global update, that comes Friday with the May PMIs. The problem is the release date which will curb activity through anticipation than generate it via response to the actual outcome. Perhaps a little more productive will be the final true week of US earnings session. There are key names on deck to reflect upon consumer spending like Walmart, Baidu, Target, Home Depot and Macy’s. If they collectively reflect on a roaring economy, it can feed a bullish leaning market. If the market cuts through the GAAP to see cracks forming, it could undermine risk appetite. 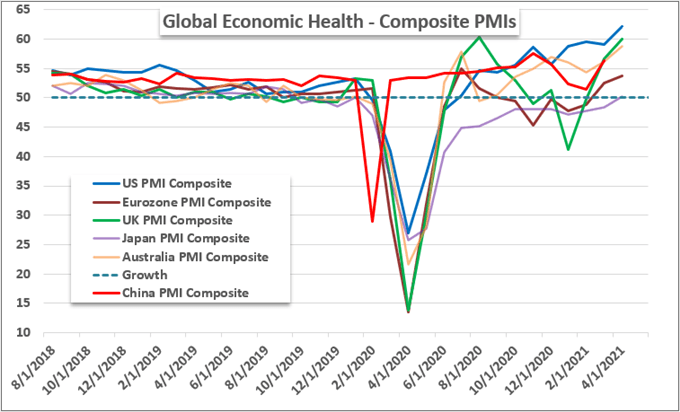 Chart Created by John Kicklighter with Data from Markit and NBS

One last area to watch for the appeal of alternative assets, appetite to get away from the ill-effects of moral hazard and sheer speculative drive is the crypto market. Elon Musk’s tweet that Tesla was no longer accepting Bitcoin for purchases owing to its environment impact seems to have left a permanent scar on the leading coin, which is only further compounded by the news that the Department of Justice and Internal Revenue Service (IRS) are investing the top exchange, Binance. The head-and-shoulders pattern on BTCUSD is a critical chart to watch moving forward, but so too is the relative performance of Cardano and other alternatives considered more environmentally friendly. That is not owing to its genuine improvement to the economy but rather traders desperately trying to capture some of the recent abundant volatility by trying to divine where deep-pocketed investors are going to place their money next. 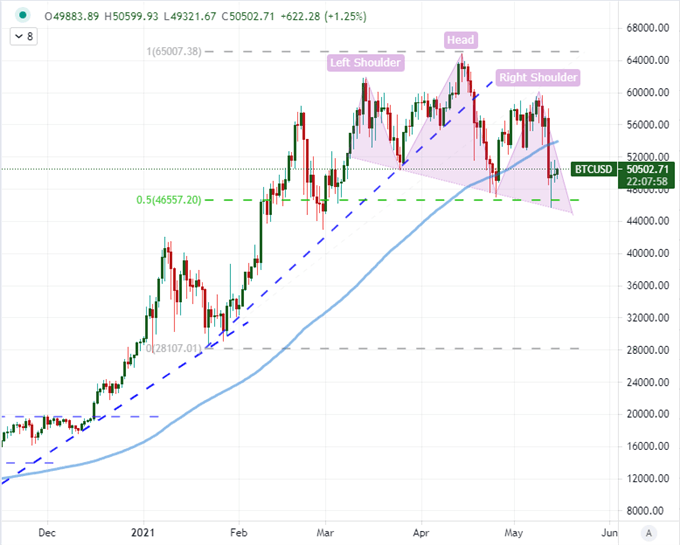