Nasdaq Drawn Between Buy the Dip and Inflation Fears, Dollar Hits Another Wave

There is the ‘Buy the Dip’ Crowd

The past week has been rough for the capital markets and particularly the major US indices. However, as the bears gained traction, there wasn’t much in the way of critical technical collapse. We came dangerously close over the past 48 hours though when the sharp acceleration in US consumer inflation charged fears that central banks would be forced to pullback on the stimulus throttle. When it came down to the wire, though, there wasn’t enough conviction in fear to tip the market into critical breaks that would threaten self-sustaining bearish trends. That hesitation allowed for a familiar urge to creep back in the market: speculative opportunities. Whether you refer to is as a ‘buy the dip’ mentality, HODL or diamond hands; the underlying sentiment is ultimately the same: enough confidence that the long-term trends are still in place to encourage exploitation of short-term corrections. 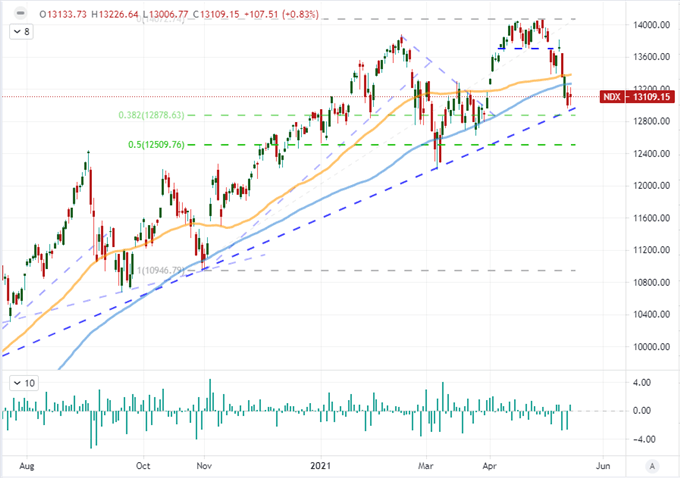 The rally mustered this past session through the likes of the S&P 500 and Dow registers more as a range based move rather than the beginnings of a new systemic bull run – at least until something more systemic steps in guide the markets further. This keeps us very much in a state of broader inertia that matches the seasonal and structural volatility/liquidity drain discussed previously. However, if there were a scenario where a sudden return to a clear bearing were possible, it would seem to be the possibility of a collapse in years of indulgent risk build up. How to keep track of that risk before it sweeps the entire market away? I remain partial to one of the more concentrated measures of speculative focus over the past years: the Nasdaq 100. The index did bounce this past session, but remains noticeably anchored to its channel floor. For a more fine-tuned gauge, the Nasdaq to Dow ratio is likely to precede an outright slide; and that ratio looks like it may be tipping into a productive retreat. 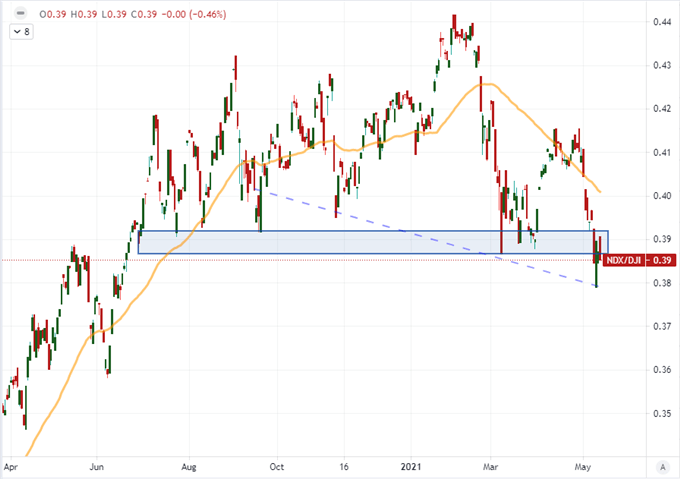 The risk trends response to the CPI data has clearly lost its momentum – though it can still play a role in speculation for monetary policy that unfolds down the line. For the Greenback, the charge around its safe haven status doesn’t seem to have put it in a particularly disadvantageous position with the equities rebound; which suggests rate forecasting itself was the bigger factor at play. That would align to the general steady state of the US 10-year Treasury yield and implied yield forecast in Fed Fund futures. The DXY Dollar Index was little changed through Thursday trade, but we are still within the descending trend channel of the past five weeks and below the 20-day moving average. 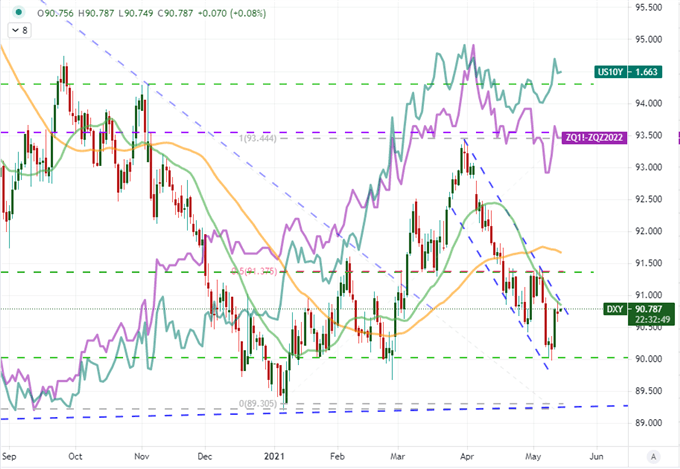 Perhaps the run of data scheduled on Friday’s US docket can resolve a late Greenback breakout (which would find significant resistance at 91.35) or path-of-least-resistance channel reversal lower. In order of fundamental import between financial media fanfare and backdrop themes, the top listing starts with the University of Michigan Consumer Confidence survey which will guide spending and inflation expectations. After that, retail sales will give an actual read into consumption habits that will have fueled growth and price pressures. Import inflation and industrial production are secondary but just as capable readings to stir up some volatility. In looking for a pair that has more fundamental risk than others, I would highlight USDCAD. There is a Canadian manufacturing report and the Bank of Canada’s loan mangers survey due Friday. What’s more, this pair just happens to be uniquely stretched on a technical basis – particularly after the BOC’s unexpected taper three weeks ago.

Chart of USDCAD with 100 and 200-Day Moving Averages (Daily) 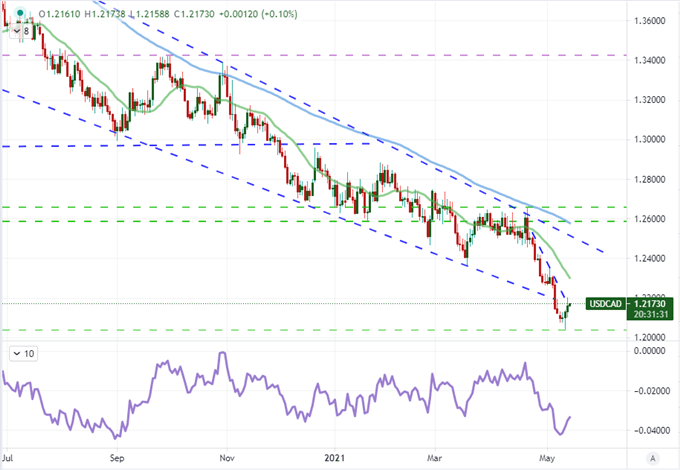 Belief in innovation and a desire to escape the control over the government have played an enormous role in driving the growth in the cryptocurrency market over the past year. However, emergent markets, no matter how virtuous their originations, will often draw unscrupulous speculative interests. It would be disingenuous to claim that the likes of Bitcoin, Dogecoin and other coins haven’t attracted a significant amount of capital purely looking to take advantage of the enormous volatility seen in this asset class. As standard bearers of risk trends like indices start to waver, the same concern will no doubt spillover in cryptocurrencies where there isn’t enough historical reference to weathering many serious market-wide risk scenarios. For BTCUSD, there is a familiar pattern at hand. The head-and-shoulders pattern that has developed the past two months has a descending neckline that roughly falls in line with the midpoint of the 2021 range. I will be watching 46,550 closely. 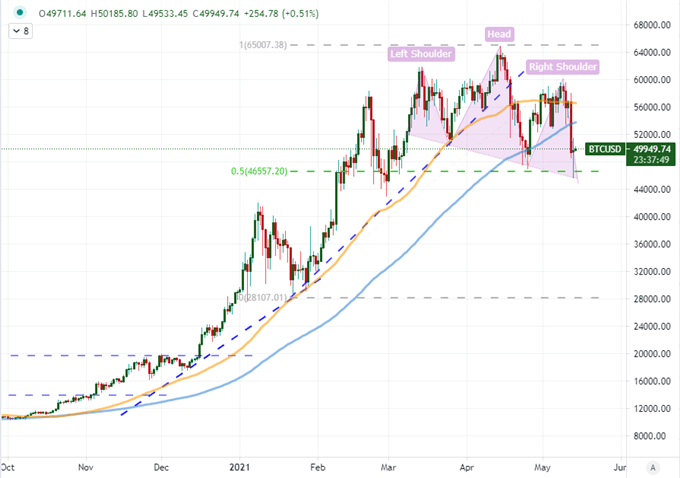 For those that are unwilling to believe that there is a significant scale of risk appetite at play behind the alternative-to-fiat market class, then a new more traditional fundamental issue seems to have come into play. ESG (Environmental, Social and Corporate Governance) is more often associated to investment trends by funds looking to place capital in firms with a positive impact on the world. The fact that coins like Bitcoin took enormous amounts of energy to mine was overlooked for the disruption it promised. Yet, it seems that even the tech believers may have a limit. After the Wednesday tweet by Tesla founder Elon Musk announcing his company would stop accepting BTC for purchases of its goods, the market shuddered. This also sent investors seeking out coins that were drew less energy to mine but perhaps also had more financial utility than say a Dogecoin (which has yet to recovery). Cardano has been an alternative discussed in circles (both in DFX and out) that could play the role. The question is whether ADAUSD is rallying because it is the future or simply because speculators are trying to get in ahead of the deep pocketed celebrity endorsers before they perhaps adopt a new coin.

Chart of Cardano Overlaid with Bitcoin and Dogecoin (Daily) 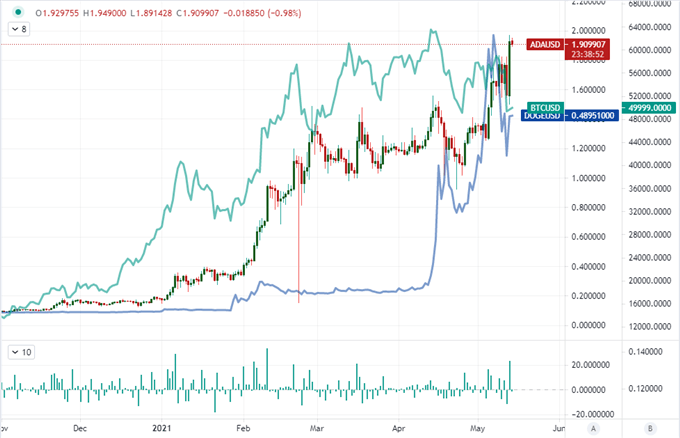