Dollar or S&P 500: Which Faces the Biggest Post-CPI Reversal Risk?

In the past few weeks, we have seen a stream of very high-profile event risk with considerable developments that would normally register on the market’s radar as a threat or opportunity for volatility. Yet, with headlines of a persistent dovish Fed, faster US GDP clip, sharp miss in nonfarm payrolls and other noteworthy developments, the market’s response was short-lived – if it budged at all. This past session’s event risk has already proven itself to be substantially more market moving than all of these preceding dudes just in the first 12 hours after the release. US consumer inflation significantly beat expectations with headline CPI printing an extraordinary 3.6 percent (highest reading since 2008) while core inflation hit 3.0 percent (fastest since 1995). The response from the usual suspects was a tumble from US equities and a rally from the Dollar. Those are both ‘expected’ moves with the outcome of the data, but the duration of the aftermath resides more in the condition of the markets for fostering follow through (poor) rather than the actual surprise quotient of the data itself. As such, pure fundamental traders would do well to consult the charts to gauge bias.

Chart of US Headline and Core CPI Year-over-Year (Monthly) 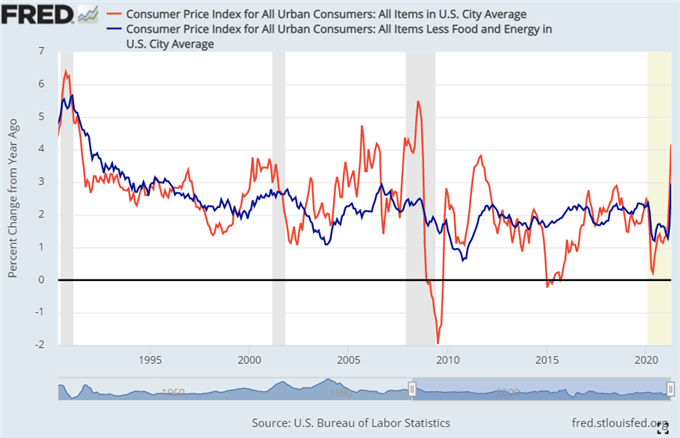 Chart Created on St. Louis Fed Economic Database with Data from the BLS

For direct risk-leaning assets, the implications of remarks from Treasury Secretary Janet Yellen last week sums up the situation neatly. She warned – and later backtracked – that rates may need to rise to prevent the economy from overheating. The connection for the investor in standard capital market assets is the Fed’s incredible accommodation has become a critical pillar for prompting already-expensive assets even higher. Value is in the eye of the beholder, but it helps when you think you will be able to turn around and sell it back to the market in a short time frame at a handsome profit. The major central banks have fostered that moral hazard, so concern understandable builds when that safety net comes under threat. That said, the Fed at its rate decision vowed it was not considering pulling back on the reigns any time soon and a range of officials did a road show the day before reiterating their belief that high inflation was transitory. That stubbornness may yet reassure a market that would prefer to be complacent. However, I will be watching key indices and key levels Thursday and forward. For the S&P 500, the 50-day moving average is immediate but the post-pandemic channel floor falls around 4,000. Nasdaq is closer to its own trendline support at 13,000 while the Dow has some room down to 33,000. 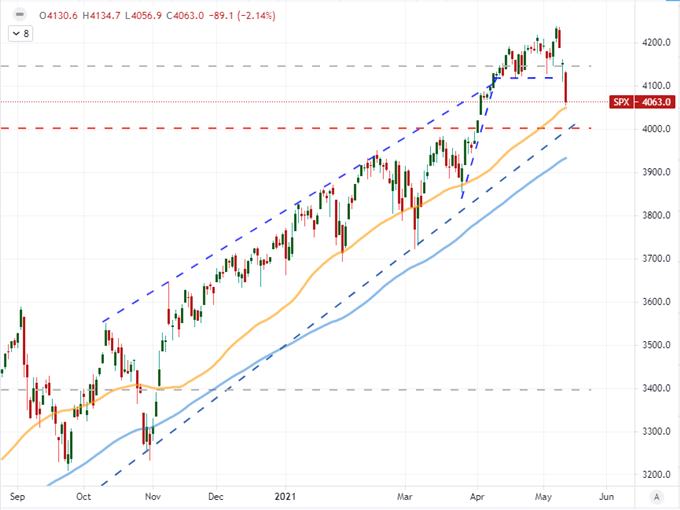 For a different picture of risk moving forward, keep tabs on implied volatility. The most famous measure of that expected activity level derived from a key benchmark comes from the VIX which is calculated from the S&P 500. Thus far, the activity gauge has posted its biggest weekly rally since the pandemic collapse starting in the final week of February 2020. Should this continue to rise, it will most likely pull the index lower. The correlation between the two is strong and negative (they move in the opposite directions at the same tempo). Given we are coming off a very restricted level, a rebound was likely. A further charge is possible, but such volatility tends to level out quickly unless we head into a full nosedive. That said, even if we see conditions level out at a higher resting rate, we may still be in for tumultuous trading in risk assets. 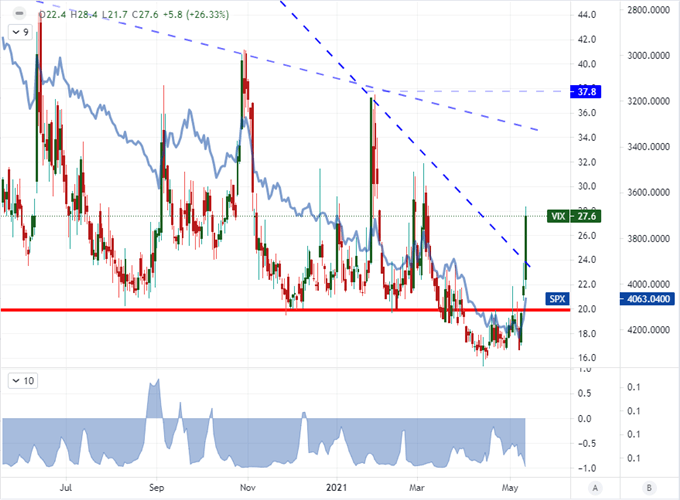 The Dollar With a Haven and Yield Horse in This Race

As logical as the slide in US indices and risk assets was in response to the sharp increase in inflation pressures, the US Dollar’s rally is perhaps the most predictable response in the spectrum. The question FX traders and observers should consider is whether the currency is playing the role of safe haven or advantaged yield candidate. With the sharp drop in the S&P 500, there is a case to be made for the Greenback stepping up as a safe haven – though I will note it didn’t rally the past few sharp risk off moves. If the response is to an upgraded yield outlook, it would align to the rise in the US Treasury yields and implied rate forecast from Fed Funds futures. Further, if the foundation of a new bull leg is dependent on further risk aversion, I feel it is more likely to struggle. Rate speculation that disputes the Fed’s ‘transitory’ mantra on the other hand can persist owing to engrained skepticism. 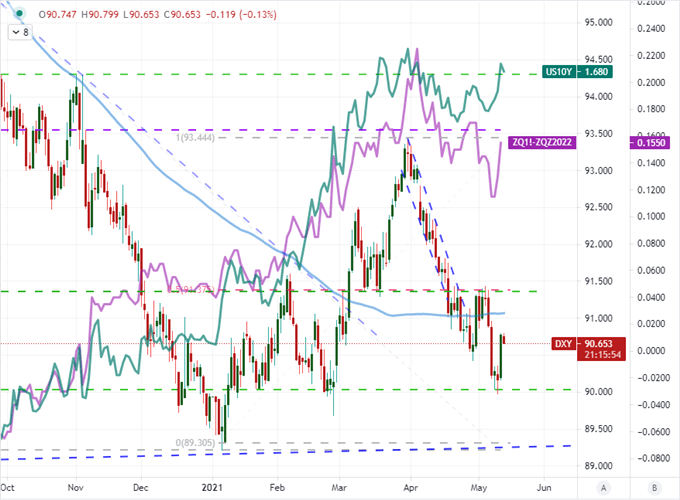 From the Dollar based crosses, there is plenty of interesting technical and fundamental milestone to consider. However, from the yield and haven combination perspective, I still believe there is more response to be found in the likes of AUDUSD. The Australian 10-year government bond yields is presently 1.749 percent while the US equivalent is at 1.683 percent. Should the outlook for the Fed build in its hawkishness, the flip would appeal for such mediocre carry consideration given the pair has 2,500 pips from the March 2020 low. As for the safe haven between these two, I feel the skew is fairly obvious. 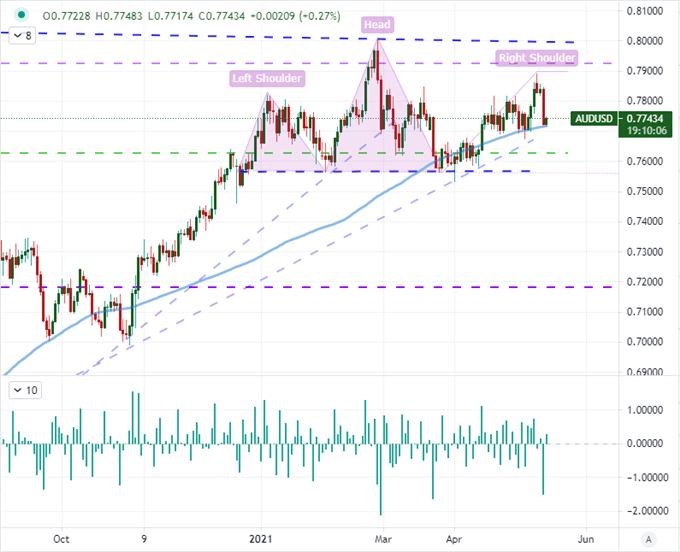 A very different Dollar pairing is USDJPY. Unlike the alignment that we find for the Dollar’s bullish or bearish outlook when staged against the Australian currency, USDJPY finds both currencies tend to act like havens. Yet, in moderate periods of risk aversion the Yen tends to outperform and full blow deleveraging boosts the Dollar. In the meantime, the rates forecast will be amplified here as Yen crosses remain very sensitive to counter currency potential – just look at CADJPY after the BOC’s taper. This is more appealing for its fundamental signaling power that its own technical considerations in my view. 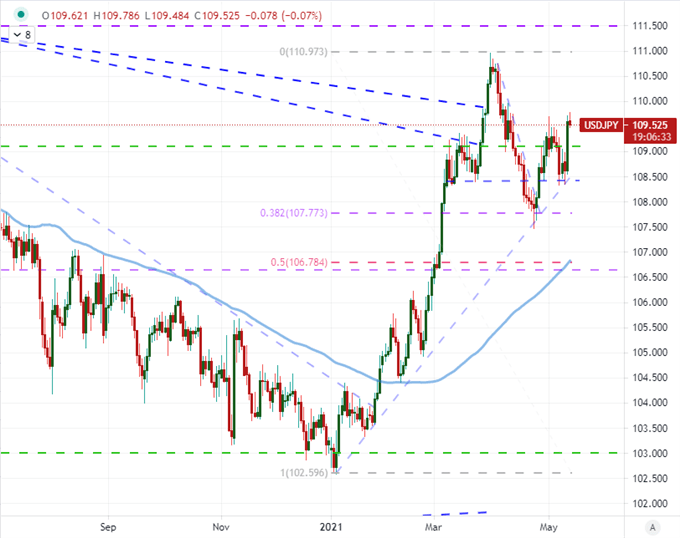 Finally, it will be important to register market view on inflation, central bank options and risk perspective through other measures in the market. I would add gold to the list of ‘to watch’ assets given its historical role as an inflation hedge. That said, Bitcoin, and cryptocurrency in general, has evolved into the newer trading generation’s preferred anti-fiat symbol. Surely the charged speculation around Fed strategy going off the rails will bolster the likes of BTCUSD; but I think it worthwhile to consider other roles this new market leader represents. Whether or not this bastion of blockchain ushers in the future of finance, many that have plowed capital into this and other coins have done so in the search for capital gains rather than an expression of true belief. That means that many behind the long view are sensitive to risk on and risk off in normal capital markets. In other words, it is likely that a careening from the S&P 500 could very pull BTC down. The 10-day correlation between Bitcoin and the S&P 500 is far stronger than its inverse connection to the Dollar. 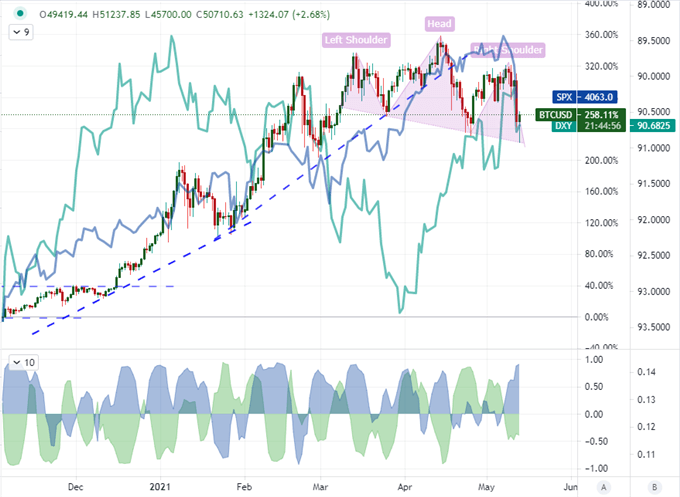