EURUSD, GBPUSD and Nasdaq Outlook: Key Levels and Events Ahead

Through much of Monday, it seemed like the markets were more or less balancing out from the rally through the close of this past week which pushed benchmarks like the Dow Jones Industrial Average to fresh record highs despite disappointing NFPs and a clear warning from the Federal Reserve. That complacent conviction was holding firm until sentiment started to go truly off the rails through the New York trading session. Few places was this more evident than the 15 minute chart of the Dow. The ‘blue-chip index’ opened with a charge higher but peaked before midday. An afternoon slip and then closing tumble turn what could have been the sixth consecutive daily rally into an intraday reversal leaving a large upper wick. Meanwhile, the tech-heavy Nasdaq 100 – more often the bullish leader through the pandemic gapper lower on the open and tumble -2.6 percent through the day for the biggest drop since March 18th. 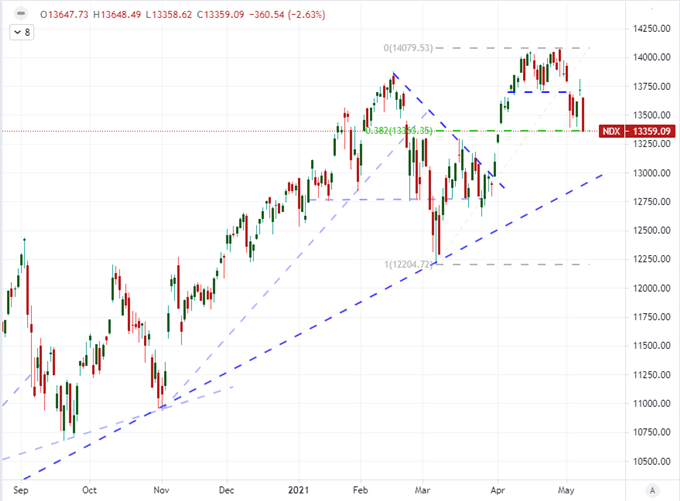 The disparity in performance between the two aforementioned indices carries with its some serious fundamental weight. The tech-heavy Nasdaq 100 has carried with it the speculative hopes that firms that generated revenue through online activity and disruption could more than weather the storm. The Dow on the other hand is treated as the ‘value’ measure that slowly paces behind the aggressive reach – though still climbing itself. With both ultimately falling through the close this past session, we continue to see the retreat from the NDX is outpacing its counterpart. This has pushed the ratio between of Nasdaq-to-Dow to drop through the floor of a congestion pattern that has developed over 10 months. It is too early to call this a self-sustained shift in appetite, but it is something to watch very closely. 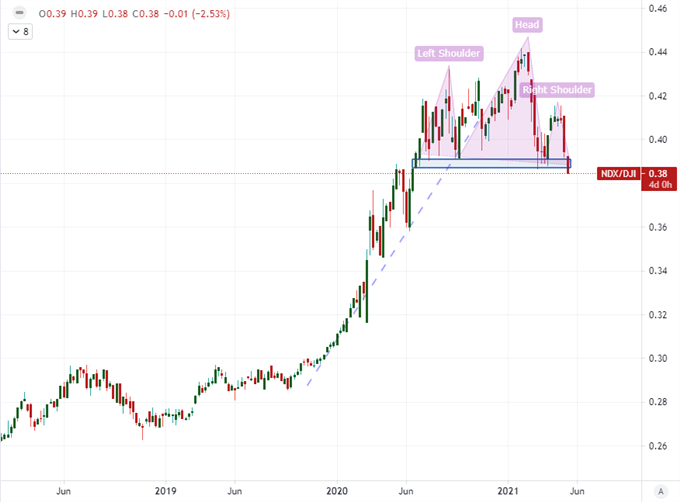 Meanwhile, other more intensive risk assets seem to have lost altitude before this retreat in US indices. Consider the aggressive charge behind the high finance measures like IPOs or SPACs, where measures for both have witnessed significant declines from February peaks. Reddit board favorites have long ago deflated, but the top discussed ticker in WSB of late, Palantir (PLTR), has dropped to a five-month low just before the company reports earnings later today. Of course, the highest profile, edge case for risk appetite is Dogecoin. The highflying crypto has tumbled since Elon Musk appeared on the sketch show Saturday Night Live. Expectations seem to have far outpaced what was practical from the inventor on what was a more than 10,000 percent increase on the year at its peak high Saturday. 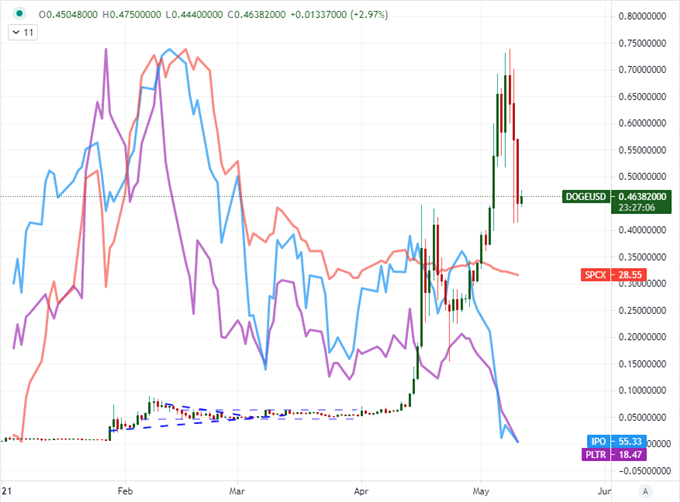 The Dollar as a Safe Haven or Inflation-Yield Candidate?

While there was a lot of action in the traditional capital market benchmarks, the Greenback seems ready to muster a significant move of its own. On the trade-weighted ICE Dollar Index (DXY), the currency seemed to principally consolidate following Friday’s post-NFP tumble. It does so just above 90 which happens to be the 38.2 percent Fibonacci retracement of the past 20-year range (from the 2001 high to 2008 low). If this translates into more substantial traction – bullish on a reversal or bearish for continuation – there are major crosses that carry tangible potential. While EURUSD and USDJPY are worth monitoring, I prefer some of the other crosses. USDCAD, for example, has enjoyed remarkable progress in its 4 percent two week slide and nearly 15 percent through the past year’s descending trend channel. 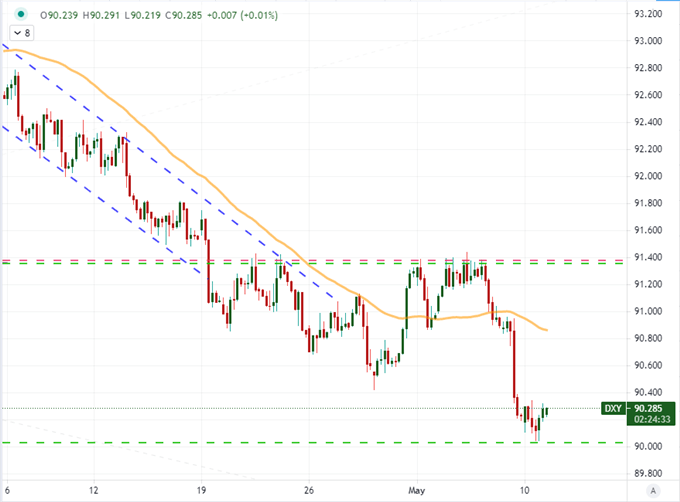 A Dollar cross that offered far more technical lift to open this new trading week than any of its peers was GBPUSD. The pair sheered through 1.4000 with the second biggest single-day rally in four months. The break cleared an overt range resistance and would also push us out of the smallest 50-day historical range (as a percentage of spot) since June 2014. This mean reversion of activity and distinct technical break is impressive but there is further resistance overhead at 1.4200 (February swing high) and 1.4300 (the midpoint of the 2014-2021 range). If the Greenback were to take a dive, that could help us clear the overhead; but the Pound’s rally after the updated UK reopening timeline is not likely to carry us forward on its own.

Chart of GBPUSD with 100 and 200-Day Moving Averages (Daily) 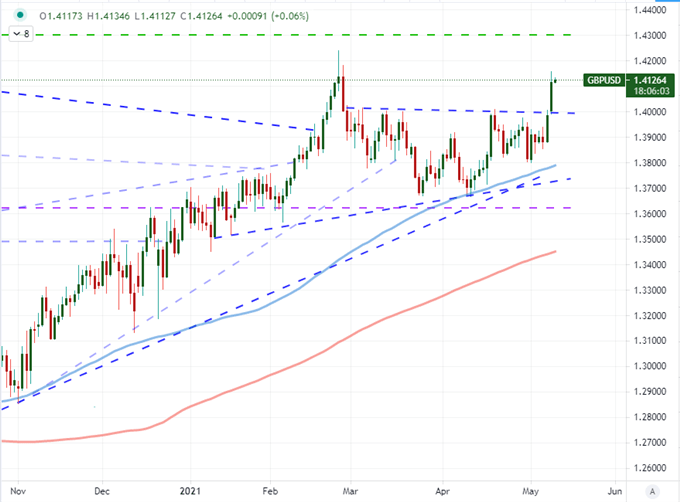 Alternatively, AUDUSD is a pair that has come back onto my radar after my havening neglected it for a while. The congestion we have seen in this pair since the start of the year has not offered much productivity amid an abundant start-and-stop scale of activity. However, such period of indecision create technical zones that will eventual break, and the picture that precedes the action will draw in greater attention and the predisposition of a self-fulfilling chart pattern. While we are still set to a bullish bias in the short-to-medium term, AUDUSD could still establish a right shoulder on a head-and-shoulders pattern. It is worth mentioning that on a weekly chart, the significance of the trendline at 0.8000 comes into view while the monthly reviews 0.7925 is the midpoint of the pair’s historical range. We are still a ways from the floor of the congestion pattern, but below 0.7550, we could see a turn that would follow risk aversion and a separate Dollar recovery. 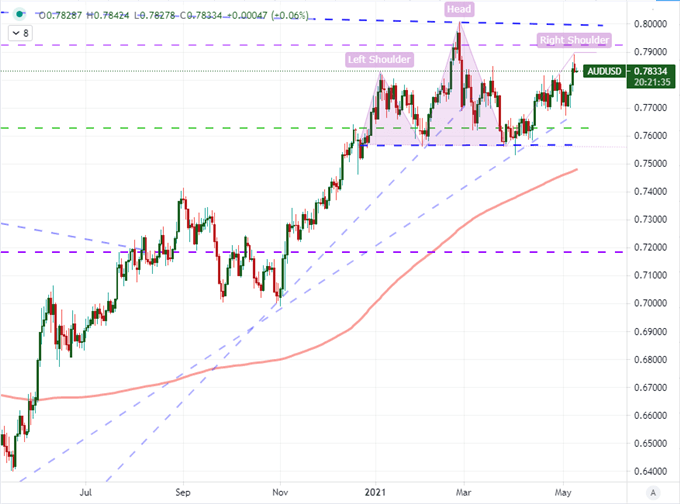