A Fresh Record High for the Dow With Plenty of Doubt

We are heading into the final trading day of the week without a strong bearing for capital markets. The underlying bias is still bullish and the Dow managed to top 34,500 to push a fresh record high, but the enthusiasm this would generate is meaningfully offset by the struggle of the Nasdaq 100 to recover from this week’s retreat and one of the most stark warnings of market excess I’ve seen from the Fed in years. It is important to establish a bead on risk trends as it is one of the few comprehensive drivers that can establish a global trend and keep it moving. That said, the threshold for confidence should be set high as these markets are far from engaged. Seasonality considerations are thus far living up to expectation with volume and volatility flattening. As such, the Dow’s break from its smallest 15-day trading range since Thanksgiving 2017 doesn’t fuel expectation of a full blow bull trend revived. 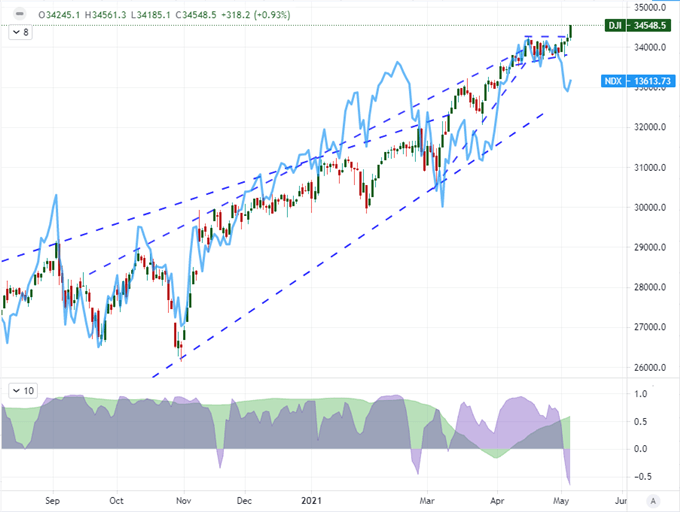 As the major US indices meander close to their respective record highs and I question the intent of investors moving forward, it seems worthwhile to keep tabs on the more sensitive measures of speculative appetite. Appetite for fad trades is one such metric. However, there has been a constant rotation from the likes of FAANG shares to Bitcoin to Tesla to meme stocks (eg GameStop) to Dogecoin without underlying sentiment faltering. As such, I will look at a more consistent measure of capital market sentiment standing in the comparison of US tech shares relative to ‘value’ measures. The Nasdaq 100 to Dow Jones Industrial Average ratio (I also like NDX to SPX) offers a look at the internals of the top performing US equity market. We are once again holding at the floor of a 10-month congestion. If this transitions from congestion to outright sliding, I will consider it a stronger bearish signal. 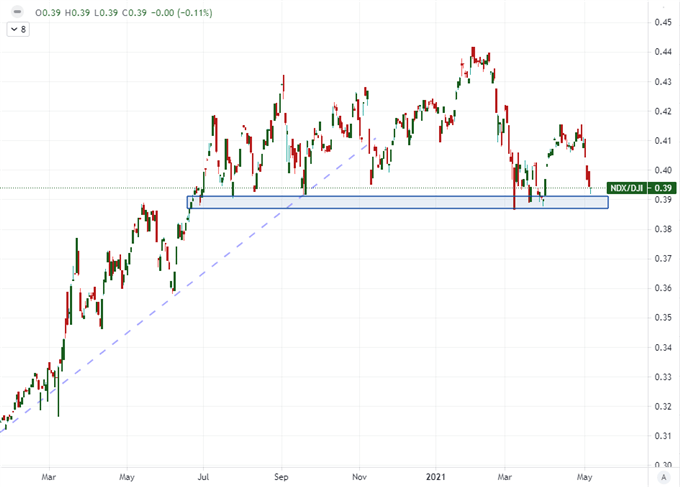 So Much for the Imminent Dollar Bull Wave

As the market works out its views on risk appetite, the Dollar found itself on the verge of making a meaningful comeback. After the steadfast April slide, the ICE Dollar Index (DXY) had worked its way into a head-and-shoulders pattern that has fallen into a terminal wedge over the past week. The break we found followed a path of least resistance (bearish) and defused the sense of imminent break. That said, this benchmark is still well within the right shoulder of the pattern and can live out the textbook interpretation of the reversal pattern. I am dubious that we will truly clear this pattern – above neckline at 91.40 or below the head at 90.40 – before the end of the week even with the Friday NFPs on tap. 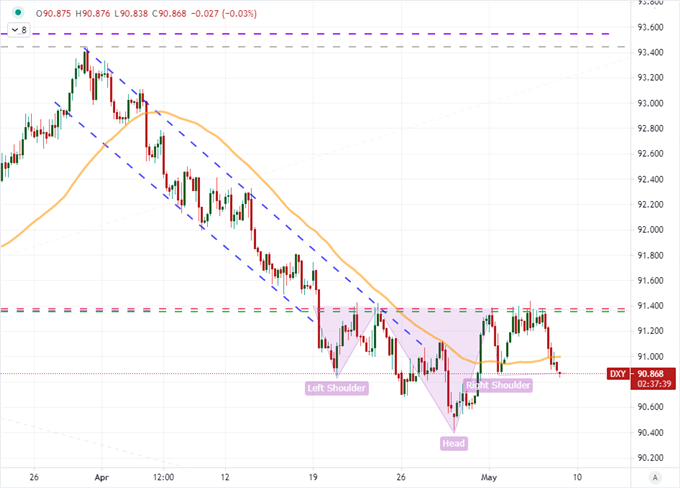 While the trade-weighted Dollar index’s technical pattern looks remarkably pristine, there doesn’t seem to be much of the same chart clarity across the actual majors. No doubt a key architect of the Greenback’s slide this past session was the EURUSD which resolved its bull flag wedge with a break to the upside – continuation. Extending to – much overtaking – 1.2150 is not particularly easy just because we managed to clear a two-week wedge pattern. Eurozone retail sales significantly besting expectations (2.7 percent growth vs 1.5 percent) likely helped, but that is not the sort of deep current which will simply carry the market forward. Aside from the US employment report ahead, we also have ECB President Christine Lagarde on tap who could perhaps lean into monetary policy comparisons to rouse some activity on this key pairing. 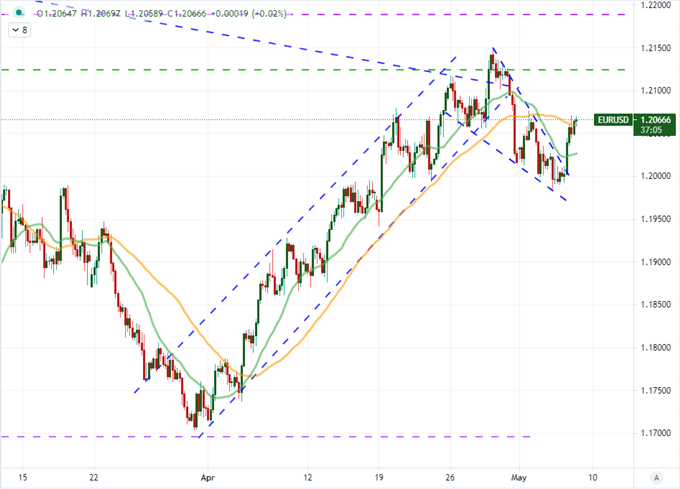 For scheduled volatility into the close of this week, the US Dollar has the target on its back. Economist forecasts project the world’s largest economy added 978,000 jobs this past month to follow on 916,000 added in March. Initial jobless claims falling below 500,000 this past session and the ADP private payroll figures coming in at 742,000 (a miss) make health room for debate. Given the Fed’s vow to avoid normalizing monetary policy in the face of rising inflation, it would seem employment has taken on a greater influence over next steps. If this data comes through robust, it could revive taper speculation for the June FOMC meeting. Otherwise, I will be looking at the data’s influence on risk trends. That will be particularly interesting following the central bank’s warning over capital markets that “asset prices may be vulnerable to significant declines should risk appetite fall”.

Chart of Change in US NFPs, ADP Private Payrolls and the ‘Surprise’ (Monthly) 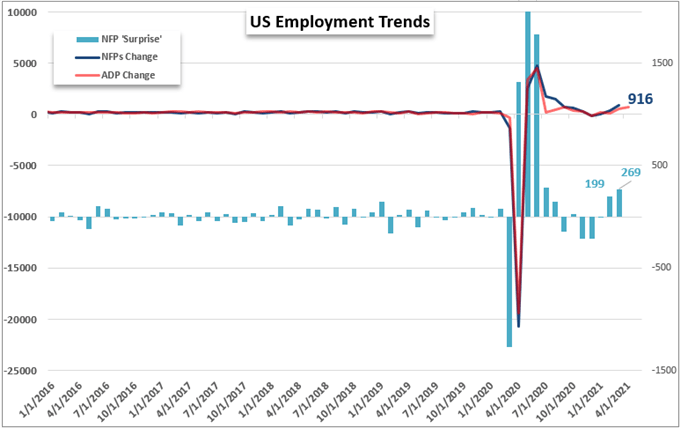 A Rare Opportunity of the Canadian Dollar Shining

Speaking of the Fed and ECB, we have run through a stretch of high profile monetary policy events this week; but none of them have overridden the continued drive of the Bank of Canada and its decision to taper a few weeks ago. That move towards normalizing (moderating extreme dovish policies) has put it in a rarified position among its major counterparts. And even though the benchmark yields are fully deflated across the board, the markets seem to be particularly tuned to the projection of higher yields. With the Dollar under pressure this past session, USDCAD managed to extend its already-impressive slide. The cross is on the verge of clearing its 2017 swing low. If it does that, we will also clear the midpoint of the past 10-year’s range. It isn’t often the Loonie takes the spotlight, but it is proving remarkably productive in its trend when most other majors are struggling.

Chart of USDCAD with 20 and 100-Month Moving Average (Monthly) 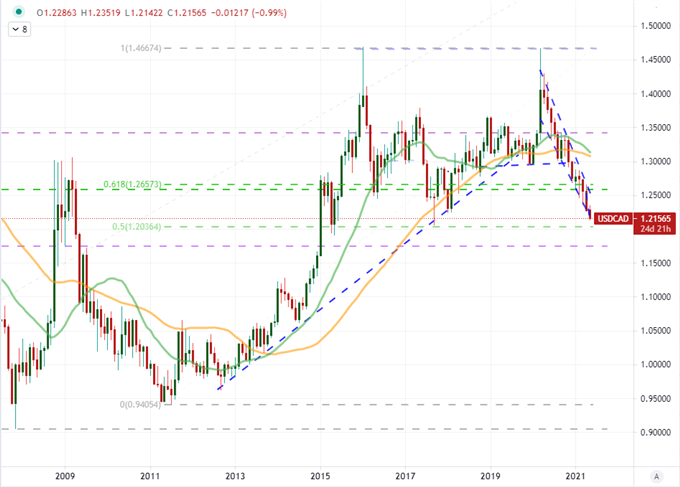 While USDCAD is perhaps the most recognizable of the Loonie pairs, it is worth looking around at the other major crosses. I am particularly impressed with GBPCAD which was also motivated by cross currency flows this past session. The Sterling itself was also under pressure following its own Bank of England rate decision. The group didn’t change the bulk of its exceptionally accommodative mix, but it did announce a taper in its stimulus program. That is technically similar to what the BOC did, but the Pound clearly did not find the same favorable push after the news. Why was that? While the BOE did upgrade its growth forecast for the UK over the coming year, the taper was one that was more out of administrational necessity than intent. The group had to slow its purchases to avoid hitting its cap too early, but it seemed intent on eventually topping its purchases off as originally intended.

Chart of GBPCAD with 20 and 100-Day Moving Averages (Daily) 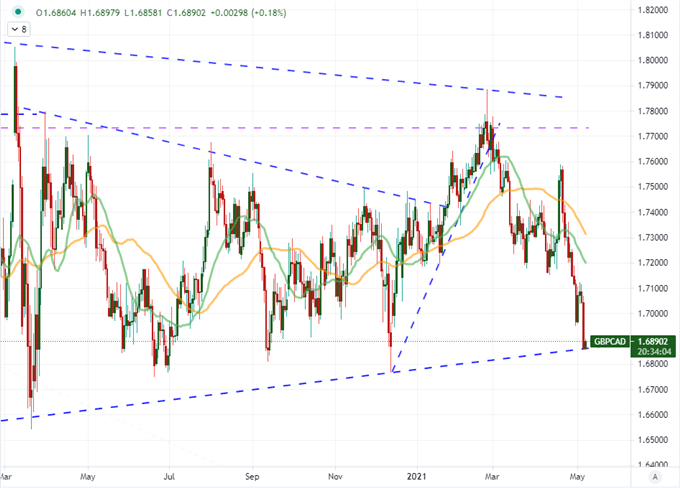