A Broader Risk On Without the Momentum

We head into Friday trade with a broader sense of risk appetite. Global indices, emerging markets and carry trade were generally advancing through this past session; but there wasn’t much in the way of momentum that would lead anyone to assume steadfast trends – the type the ‘buy and hold’ crowd would be comfortable jumping onto. Notably, the S&P 500, Dow and Nasdaq all put in for records this past session, dropping the pretense of preference and reflecting a more general appetite for exposure to greater returns via follow through…even if zombie-like. 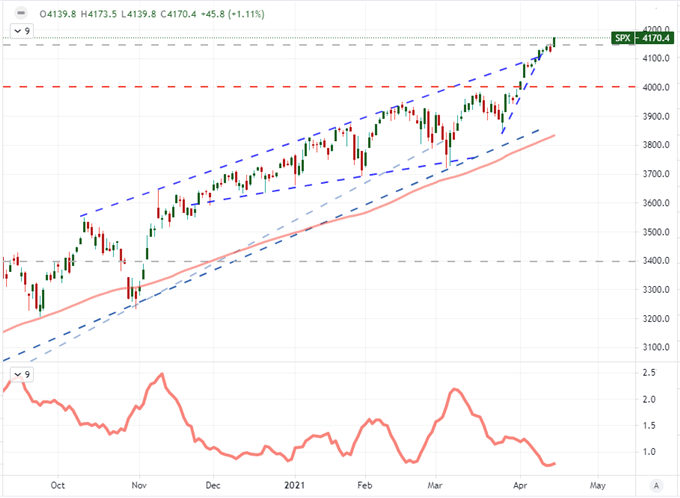 In general, the bullish speculative bearing is a tenuous one even if it is broad. For most measures I follow, the pace is tepid whereby the reward of jumping into the trend now would be remarkably restrained while the open-ended risk would be sizable should something go horribly wrong in global sentiment. As has been discussed before on DailyFX, these conditions fit the seasonal expectations. If we follow the typical path, low volume can curb volatility and encourage the complacent climb in capital markets. That said, there remain so many sparks that it would be quite the risk to keep a bullish lean with a long horizon. On the other hand, the conditions don’t have to be extremely anemic or full-tilt run. There are short-term bursts of volatility that are likely in certain assets. The benchmark German equity index, the DAX 30, is one such market to watch with a range so extreme – a 7-day channel so tight, it doesn’t have an equal until you look all the way back to October 2017. I expect a break, but that doesn’t mean there has to be follow through. 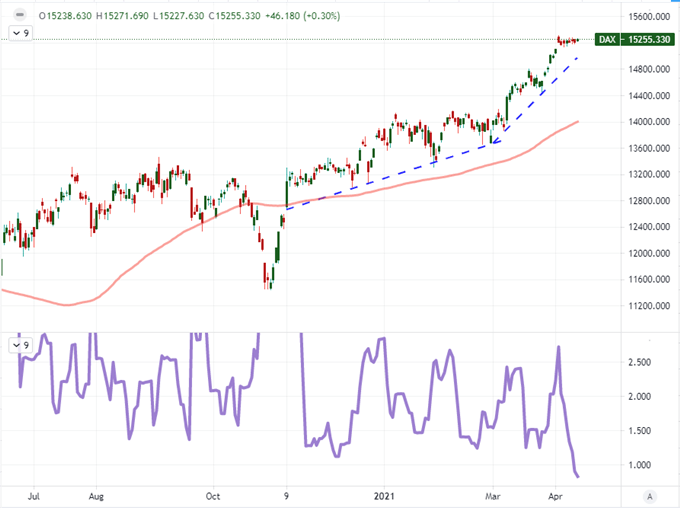 Where the Volatility Is More Robust: Emerging Markets and Cryptocurrency

While the broader financial markets are struggling to find a deeper sense of conviction, there are still certain areas of exceptional market movement. The cryptocurrency space is still showing a remarkable degree of speculative interest. The second day of trade for Coinbase, the first ever listed crypto exchange, witnessed a settling of volatility and another decline. That doesn’t lessen the impact for legitimacy COIN represents overall however. Bitcoin was more controlled in its maturity while Etherium pushed to a fresh record high on a 3.5 percent advance after its third consecutive session higher. The true outperformer though remains Dogecoin. Even through early Friday trade, the coin continued to accelerate after a three day run with a 56% increase just since the start of the session that brings year-to-day gains to a staggering ~6,500%. I don’t think this is the discovery of deep value in a crypto-embracing world, rather it registers an appeal to similar to silver after gold has an impressive charge. 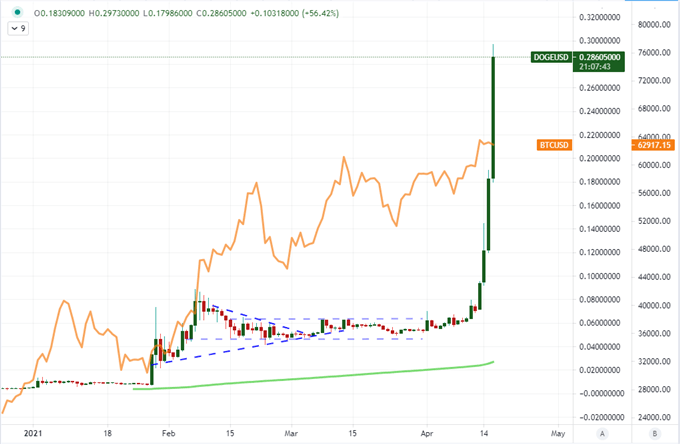 Though not nearly as volatile as the second tier cryptocurrency space, there is remarkable movement to be found in the more conventional emerging market currencies. While the EEM Emerging Market ETF was up this past session, there was limited progress amid the risk uncertainties. In the meantime, the FX space for these countries looked far more active. USDCNH of course was of great interest this morning given the Chinese 1Q GDP jump of 18.3 percent year-over-year, though a closer look shows the removal of the pandemic contrast offered up a quarter growth clip of only 0.6 percent which was nearly a third of the forecast. USDRUB is another high-interest for me moving forward giving the growing tensions between the United States and Russia given sanctions over alleged election interference and the tensions in Ukraine. For a purely technical based view, USDINR’s reversal is of interest, but USDZAR carries the hallmark of a break from a multi-year congestion pattern. 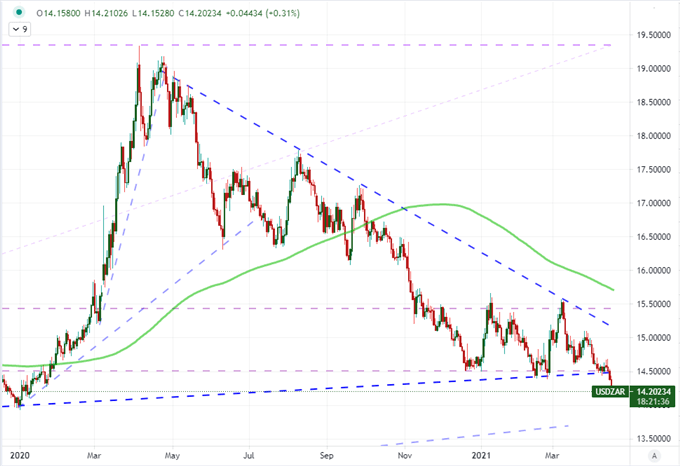 The 25 point range on the DXY Dollar Index this past session is one of the smallest we have seen this year. That doesn’t seem to be a particularly remarkable performance from the benchmark currency; but given the context, it registers as an impressive day in my book. While retail sales beating expectations with a 9.8 percent jump and initial jobless claims being cut from 769,000 to 576,000 bode very well for relative economic performance, the complete overlook of previous favorable growth readings (NFPs, ISM services, IMF outlook) suggests this wasn’t a big influence. On the other hand, US yields and rate forecasts which have tracked the currency very closely over the past weeks and months continued to slide while the Greenback held steadfast. The US 10-year yield finally slipped below a ‘neckline’ at 1.60 while rate forecasts through end of 2022 via Fed Funds futures dropped to a projection of 15 basis points. Despite that, the Dollar held steady. That could support a bounce Friday (perhaps with the UofM sentiment report) or next week with the proper motivation. 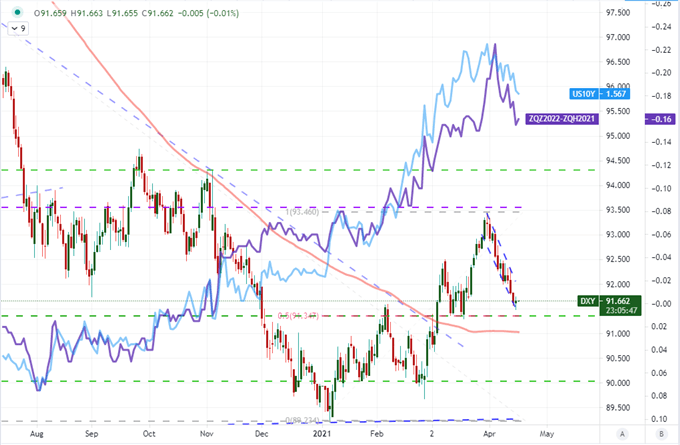 While direct Dollar exchange rates are the closest measure of the USD performance, they aren’t the only means for registering market activity. The top commodities were also higher this past session despite the fact that the benchmark currency used for pricing was holding fast. Crude oil advanced Thursday to undermine the head-and-shoulders the chart has been forming for weeks. More impressive though was gold which pressured a possible break of the frequented pivot (level of both support and resistance in the past) and midpoint to the 2020 to present range at 1,765. I’ll be watching this market closely Friday. 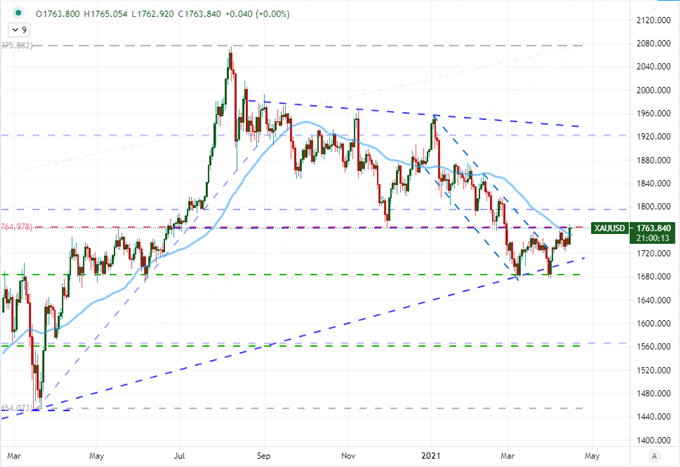