Risk trends continue to group for direction without much success broadly across the markets, but the crawl in US indices to fresh record highs continues to defy gravity – if not expectations. So, while the S&P 500 and Nasdaq 100 were ‘off’ this past session, it is far from registering as a meaningful shift among market watchers. Both indices are a sneeze from records with the promise of full Fed commitment and extraordinary growth forecasts still echoing in our ears, so fear would be difficult to muster. Further, the commencement of the quarterly earnings season with solid numbers from the banks that reported yesterday (Goldman Sachs, JPMorgan and Wells Fargo) is the kind of fodder for which bulls regularly partake. That said, activity levels continue to crash. While the past two weeks have seen solid progress, the average true range over the same period is extraordinary lows. Volume has also continued to dry out. Some consider that a favorable and seasonal wind. I still believe it a possible destabilizer for the unexpected. 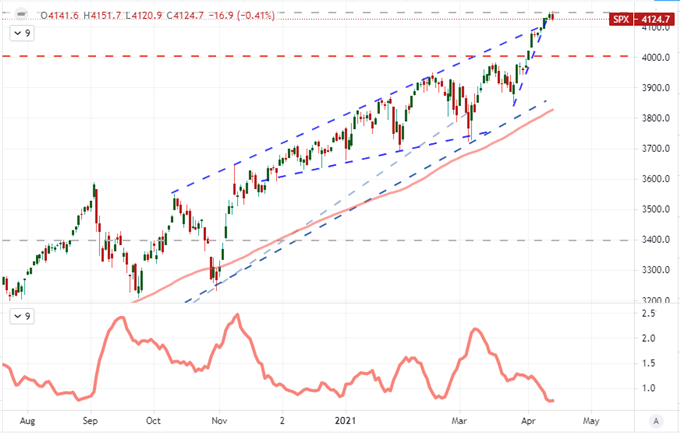 Looking to global risk trends, it would likely take a serious thematic matter to rouse the market to the banner of full panic or greed. A move that not only aligns the various regions and assets but also overcomes the thinning liquidity conditions despite a range of favorable upgrades to growth, stimulus and speculative interest means the unpredictable catalysts with weight are likely to move on the bearish side. Pulling into equities in particular, however, earnings may still be able to generate some impact. This past session, GS blew EPS out of the water with an $18.60 earnings per share (EPS) versus $9.79 expected. JPM and WFC were more down to earth with $4.50 (vs $3.05) and $1.05 (vs $0.69) respectively. As impressive as these numbers are, it seems almost assumed that major banks should beat in the recovery. The outlier and rumbling of insecurity rests with Credit Suisse and Normura which have reportedly taken huge hits in the failure of Archegos. How heavy a toll the loss accounts for is an open concern for an industry expected to be given the greenlight for dividends and buybacks after the June 30th Fed Stress Test. 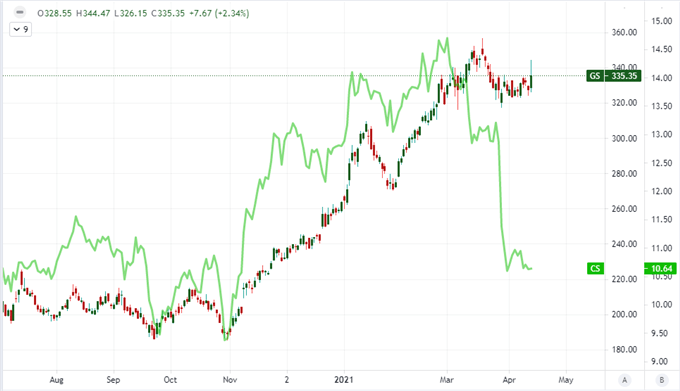 For earnings today, there are a few more traditional banks on tap: Bank of America and Citibank. They are likely to fit into the same category as the three that reported this past session and are thereby unlikely to register at the index level – much less full risk trends – unless there is some serious, unforeseen hit to be announced. Instead, I will be watching company reports that tap into different themes. BlackRock is the world’s largest asset manager and is a stronger beacon to the surge in speculation amid the post-pandemic stimulus infusion. Delta will no doubt show through earnings and forecasts the pacing towards ‘return to normal’ for the economy as vaccinations are administered. Meanwhile TSM is a lesser known stock that can tap into the resurgent US-China trade war tensions as well as the global chip shortage causing problems down the supply chain. 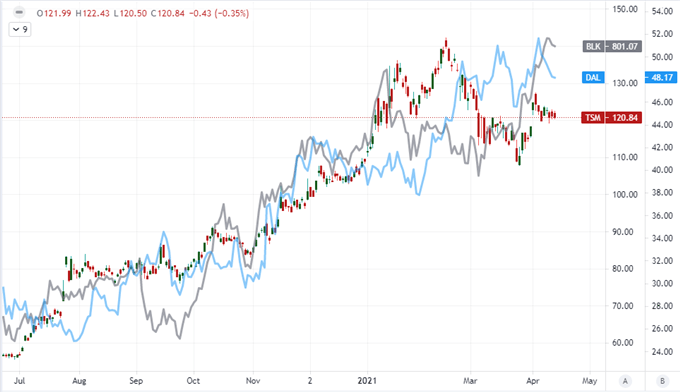 In the FX market, the Dollar dropped for a third consecutive session as Fed Chairman Jerome Powell repeated the central bank’s commitment to keep policy extraordinarily accommodative for the foreseeable future. The talking points that made the headlines were his suggestion that they would follow a model of tapering when it were to begin that mirrored 2013-2014. Having watched that process, it begins with forward guidance that is more certain of a shift in attitude, a reduction in the balance sheet and then eventually rate hikes. The taper conversation began in May 2013 and the first hike was December 2015. Risk trends (the S&P 500) didn’t struggle until months before the actual hike while the Dollar started to seriously climb in early 2014. If a reduction in balance sheet starts well before the first hike and forward guidance readies the taper, a market expectation of a hike by end of 2022 (priced in futures) would suggest a signal of turning the titanic soon. 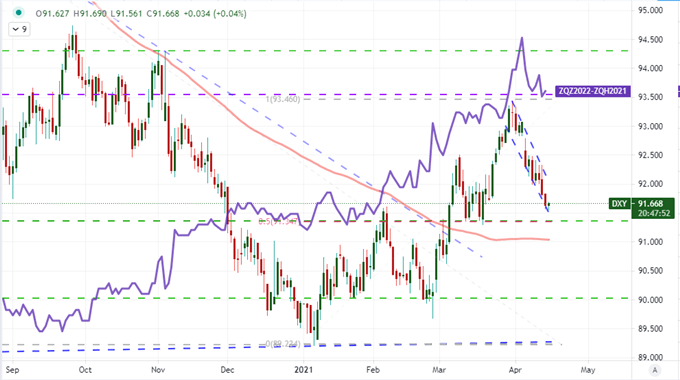 A ‘Legitimacy’ Boost for Crypto and Emerging Market Volatility to Watch

Without doubt, the most impressive asset for volatility and progress this week has been the cryptocurrency space. This past session, Coinbase became the first crypto exchange to have its shares listed and traded. That is a significant milestone in the legitimacy of more than just the company. It reinforces the business traction of the blockchain backed financial world. COIN traded as high as $429 per share which pushed its market cap briefly above $100 billion but it eventually settled at $328. The company is a key player in trading Bitcoin and Etherium, but another coin seemed to own the top spot for momentum: Dogecoin. DOGEUSD is up nearly 2,500 percent since the start of the year. This seems a combination of asset group benefit and the constant references by cultural powerhouses like Elon Musk and Mark Cuban. 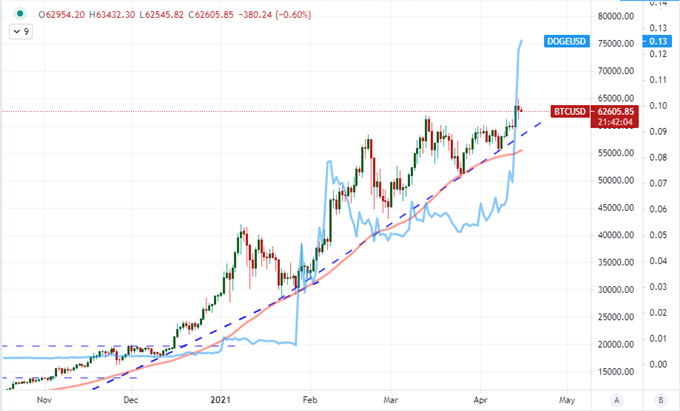 Looking ahead for the more volatility, those that navigate the FX market would do well to keep tabs on some key emerging markets. I will continue to keep a close eye on USDCNH as tensions between the US and China continue to build – though there was no definitive update from the Senate Foreign Relations Committee meeting on the topic of its counterpart. ‘Concerns’ are starting to turn to threats between the United States and Russia as the latter builds up troop presence on the boarder with Ukraine and NATO has stated it was prepared to back its member. USDRUB should be on watch. Finally, USDTRY will face an important event Thursday: the first monetary policy decision by the central bank since President Erdogan removed Governor Naci Agbal last month. The inflation fight that lifted the benchmark rate to 19 percent seemed to prompt the removal, so will the bank now reverse course?

Chart of USDTRY with 50-DMA (Daily) 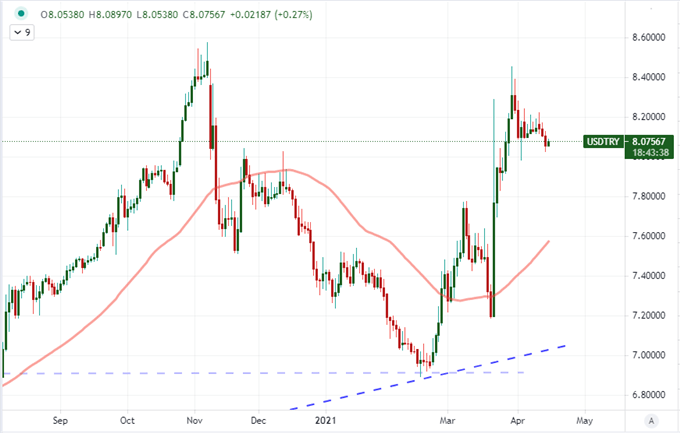