A Fresh Record High for Major US Indices as Volume Craters

This past week was marked by a push to fresh record highs for the major US indices. The S&P 500 and Dow notched new peaks with a burst of life following days of extremely tame chop with the Nasdaq 100 joining the crew with a recovery that returned the tech-heavy index to headline glory for the first time in 37 trading days. Yet, despite the peaks and recovery from the past years’ favorite NDX, the activity levels remain exceptionally low. The four-day activity measure (ATR as percentage of spot) for the S&P 500 is at the lowest levels since holiday trade in 2019 while the implied (expected) view from the VIX volatility index slid below 17 for the first time in 13 months. Furthermore, the five-day average volume across all US indices fell to the lowest turnover since October. Some may consider that encouraging and perfectly aligned to seasonal norms, but I retain a heavy measure of skepticism given the lack of conformity in sentiment across the global financial system and considering the lack of any reasonable measure of discount. Brass tacks, this means I will not be jumping into any blind ‘risk on’ trends for the foreseeable future. 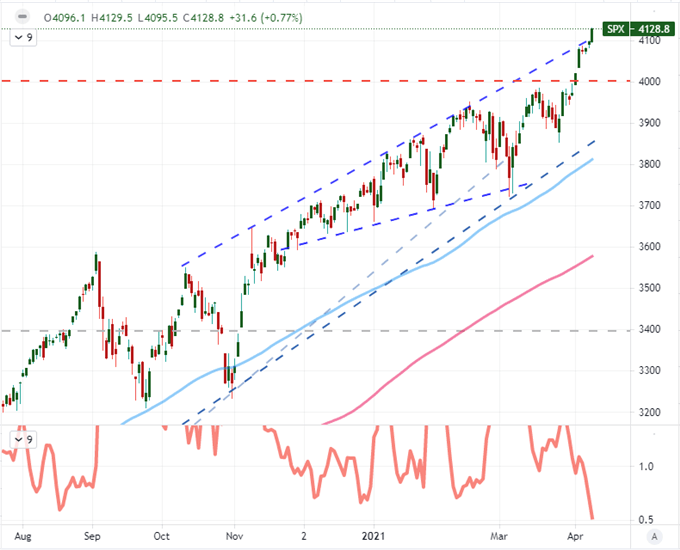 One of the most pressing concerns I have over the robustness of ‘risk appetite’ is the lack of conformity in the speculative reach from other assets that follow sentiment’s ebb and flow. Global equities are inconsistent as a contrast to the likes of the S&P 500 with measures like the FTSE 100, Shanghai Composite and Nikkei 225 on different footings. Emerging markets – from the EEM ETF to the pairs like USDINR and USDZAR- seem to be struggling under the outlook of rising inflation and rate forecasts. Of the various asset classes I follow, however, the carry trade continues to deviate path. AUDJPY and NZDJPY are particularly well known as preferred pairs for yield, which raises serious questions when the head-and-shoulders pattern they have both carved out is taken into consideration. 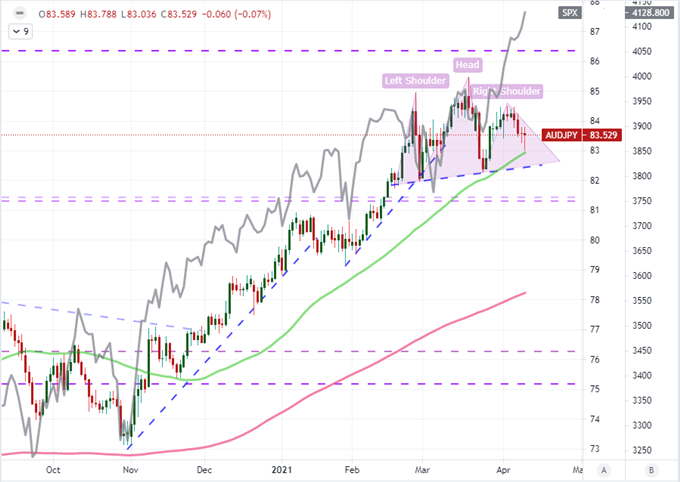 This past week, the top fundamental theme was clearly the exceptional outlook for global growth. The IMF’s World Economic Outlook (WEO) upgraded its global growth forecast to 6.0 percent – the fastest clip of expansion since 1980. In particular, the US was in a particularly strong position with a 6.4 percent clip that outpaced all but certain emerging counterparts. That further built upon the nearly 1 million jobs added via NFPs the previous Friday and the record measure from the ISM’s service sector report. Despite all of this, the markets and Dollar seemed to brush off the news as if it were not even present. There is still considerable weight to this theme, but the markets must determine when it matters for market movement. In the meantime, the start of the new US earnings season may tap into influences that have proven more fruitful for volatility as of late: earnings and speculative opportunism. The banks are the core group of major listings ahead (Goldman, Citi, Morgan Stanley, JPMorgan) but I will watch for updates form the likes of TSM amid the chip shortage and China tensions as well as Bed Bath & Beyond given its role during the January meme stock revolt. 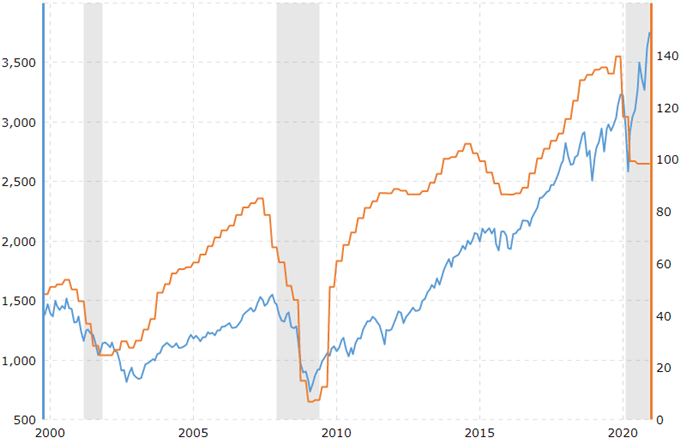 For the US Dollar, the lack of lift we found despite the relative benefit from economic activity and forecasts for the world’s largest economy leaves us to find the practical driver. Given the Bank of America fund managers’ survey (and my lesser Twitter poll) had respondents suggest yields and inflation was a top concern at present, the attention should fall back to the US 10-year Treasury yield and Fed Funds futures which have enjoyed a more nuanced correlation to the Greenback as of late. Early in the week ahead, we have consumer inflation expectations and the official CPI on Monday and Tuesday respectively. 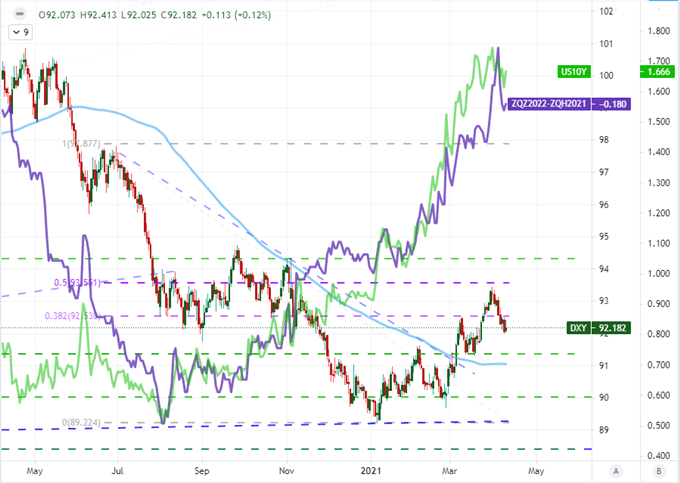 If we are consulting the economic docket, the potential impact of event risk like US CPI on the Dollar or earnings for their respective stock tickers is tangible, but it perhaps isn’t the most loaded in terms of anticipation. If there were one region that was overloaded with high-profile events this week, it would be China. The most headline loaded event on tap is the 1Q GDP report from the country which is nested neatly alongside the March economic data (retail sales, industrial production, fixed asset investment). Yet, Friday event risk is notorious for falling short on follow through potential – and China’s data is even more infamous for printing essentially in-line with expectations. That later point may very well curb the impact of the trade balance statistics on Tuesday and the fixed direct investment on Thursday. However, not everything ahead has been rendered inert. On Wednesday, the US Senate Foreign Relations Committee is due to discuss the country’s approach to China with indications from previous weeks pointing towards a revival of trade war tensions to some degree. As such, USDCNH will be a key pair to watch – perhaps returning it to its critical benchmark status similar to its influence back in 2018-2019. 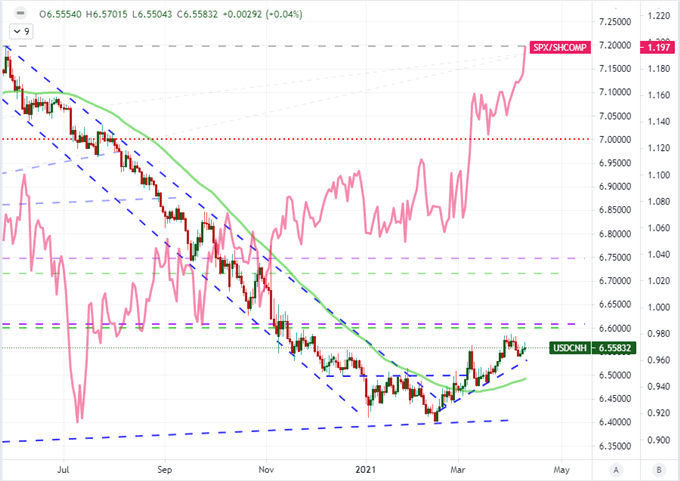 There are a host of Dollar based crosses that are worth watching ahead. USDJPY is a carry candidate with deeper economic roots while the AUDUSD could absorb the influence of China though its own data like the employment change poses more impact potential. USDCAD is still feeling the impact of a Canadian jobs report that was three times larger than expected and EURUSD is always critical to watch for undercurrent. As for GBPUSD, the data Tuesday hits important topics with February GDP and Trade while the NIESR growth tracker for March can help steer 1Q expectations. Yet, this data has a very poor track record for urging critical breakouts – much less the development of trends. It can, on the other hand, urge volatility for more productive range swings. And Cable is well positioned for swings between 1.3900 and 1.3675. 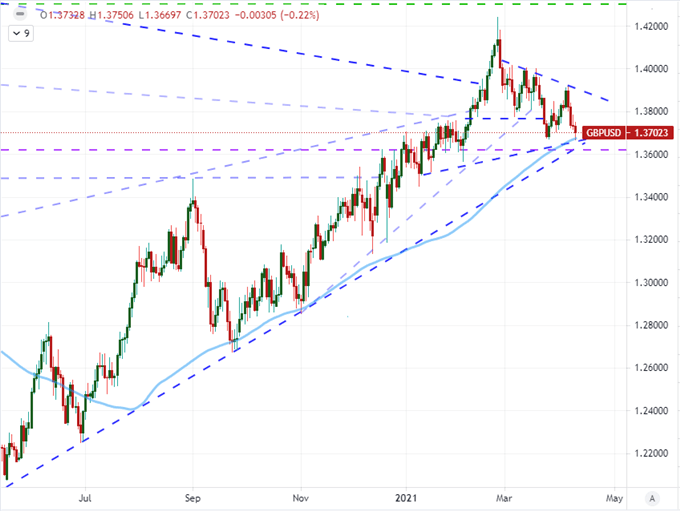