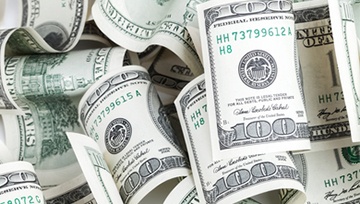 A Roaring Start to the Week…Before the Markets Fully Open

Between a remarkable Friday NFPs which the markets couldn’t respond to owing to the Friday market holiday and a record US service sector report, there was serious pressure building behind risk appetite. That charge hit the markets this past session with an extended rally across the major US indices as the S&P 500 and Dow Jones Industrial Average pushing fresh record highs. The SPX’s progression is particularly impressive consider it had marked a critical breakout beyond a major psychological level (4,000) the day before the broad market holiday on Friday. Follow through wasn’t exactly easy after that hurdle was passed given the absence of a market depth in other financial centers around the world, but the concentration of high level event risk made the course much easier to follow. That said, there were two unusual aspects to this enthusiasm: the inconsistency of optimism in many other risk-leaning assets and the Dollar’s struggle despite the localization of the favorable news. 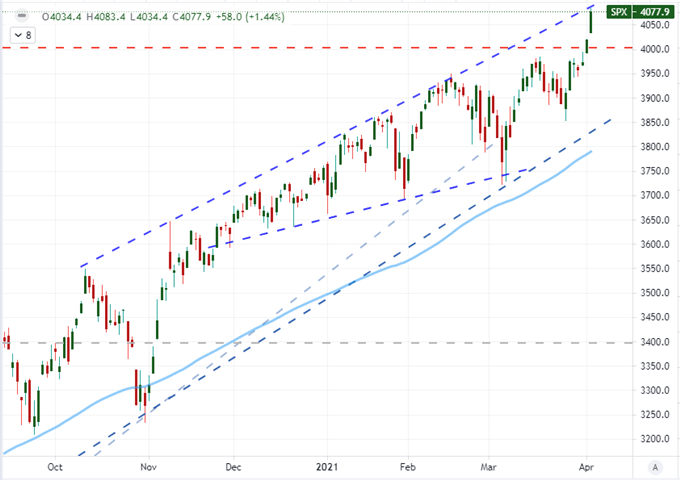 This past session was the fourth day of an extended holiday weekend for many countries in Europe and Asia. That would naturally take asset that trade in these different regions out of the running to join the US equity swell. However, there were numerous such assets that were active via US channels that were showing meaningful deviation from the path the SPX was trying to blaze. The VEU ‘rest of world’ equity ETF was up with a Nasdaq 100 type three-day charge that is still short of its recent swing high. That said, derivatives markets for indices like the FTSE 100 (UK) were lower by the Nikkei 225 (Japan) and Shanghai Composite (China) are trading back through early Tuesday trade. Meanwhile, the emerging market ETF (EEM), junk bonds and crude oil were all flagging through the day. The most prominent performance would come from the carry trade set for me. While most of the Yen pairings were flat, USDJPY was sharply lower. It is remarkable enough that these yield-sensitive risk assets were not rising, but the Dollar’s involvement added a significant dimension. 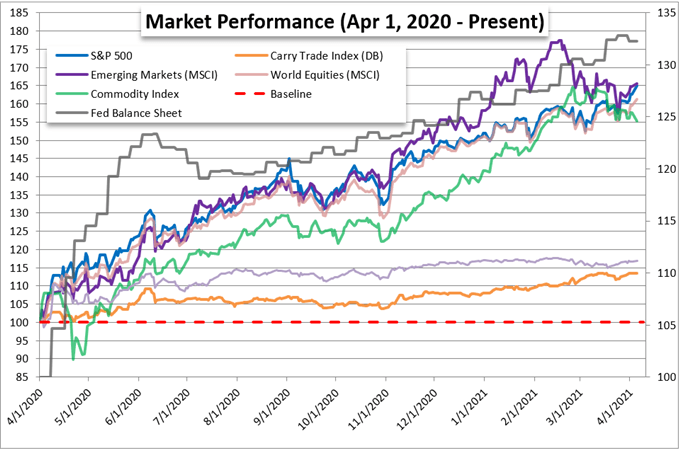 What is the Dollar’s Game?

USDJPY’s technical reversal comes amid an incredible multi-month advance that has recently overtaken noteworthy resistance and looks overdue for a breather – especially with many overlapping zones above and the pairs historical midpoint at 111.50. Yet, the real culprit for the deviation this past session was the Dollar’s drop. It is remarkable that we had strong data over two days (Friday and Monday) along with risk appetite that would compound into building expectations for Fed rate hikes; and yet, the Greenback would retreat. In fact, the pricing of central bank intention through the end of 2022 hit 24 basis points mid-day Monday – virtual certainty from the market of a hike through that time frame – and yet the USD would slip. On a carry forecast, relative growth and relative vaccination schedule comparison; the Dollar would seem to have the advantage. The only major detriment in this mix would be the Greenbacks’ role as a safe haven, but is that really at play now? Watch the consumer inflation expectations data due from the US in Tuesday’s New York session.

Chart of USDJPY with 20-Day Mov Avg, Overlaid with US 10-Year and 100-Day Disparity (Daily) 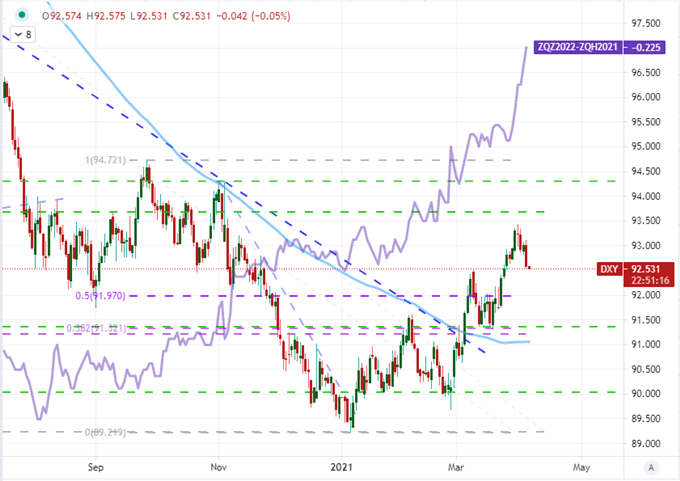 It isn’t difficult to see where expectations of rate hikes in the foreseeable future from the US central bank are coming from. This past Friday’s nonfarm payrolls offered up a 917,000 net increase against expectations of 674,000. That is a significant beat on an already robust figure. So while the jobless rate would only slip back to 6.0 percent – well above the previous natural ‘full employment level’ – the pacing towards recovery is coming quickly. It is easy to dispute the Fed’s assurances. That was common place back in 2015 through 2019, and the market did force the group’s hand during that period. 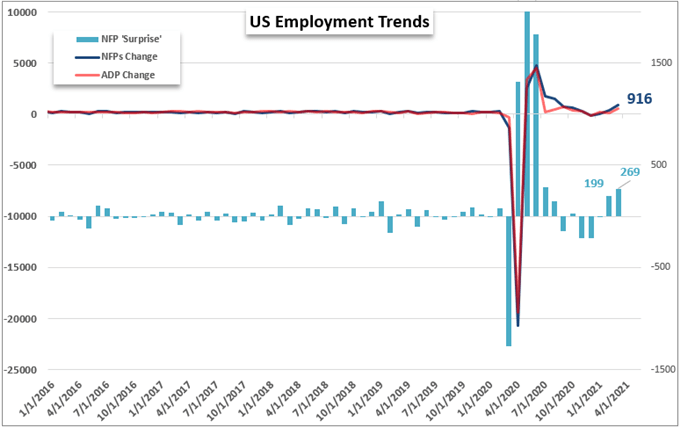 While I’m watching a few things on the docket and for warnings in the headlines on a number of open topics, the top scheduled theme on my radar ahead is the picture of growth as it ties back into the effective of stimulus, the reopening of economies from the pandemic and the pressure on monetary authorities to normalize their extreme exposure. The most remarkable growth update I’ve seen in data since the sharp reversal from the covid-driven recession was the ISM’s March activity figures. Last week, its manufacturing report hit a 37-year high, but this represents a smaller portion of growth and jobs. Yet, Monday’s service sector report offered an equivalent surge with an even more historic perch – a record high. This presents a remarkable fundamental advantage for the US relative to, say, Europe which is struggling to distribute its vaccinations to revitalize growth. Then again, aggressive growth naturally leads to the same issues that could lead the Fed to withdrawal. 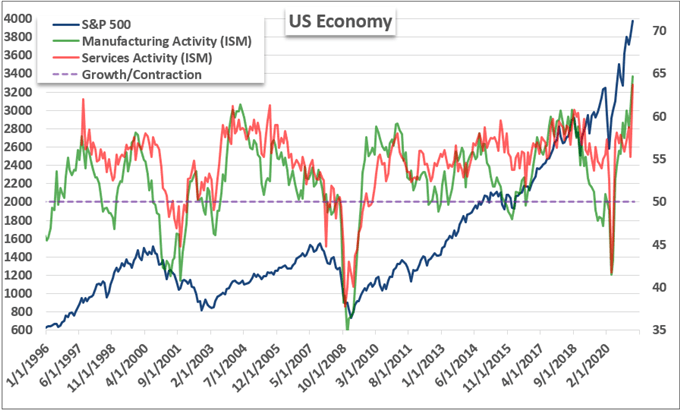 Chart Created by John Kicklighter with Data from the ISM

While US growth is still top of mind going into the new trading session and I intend to monitor data points such as the IBD economic sentiment survey, my attention is on the global outlook as the IMF prepares to release its semi-annual World Economic Outlook (WEO). It’s January update had already offered an impressive 0.3 percentage point increase in growth forecasts to 5.5 percent for world output from the previous October figures. Given vaccine distributions which they were incorporating into their projections are underway, it is likely that further upgrades are possible, perhaps even likely. More noteworthy from this update though is likely to be the further deviation in projected growth paths. If, for example, the US and Euro Area relative projections diverge further; it will be important to see how EURUSD responds. 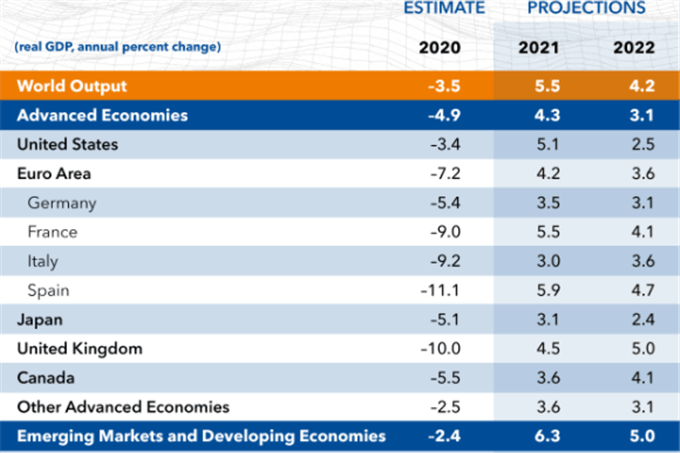