Dollar Advances and US Stocks Stall Ahead of Biden Stimulus Details

Pressure Builds Up Behind Market’s Indecision on Risk

For market participants that were looking for justification to charge either their fear or greed, there was a menu of tangible catalysts to pick from this past session. If your bias was moving with the underlying current, the bullish among us could have drawn from a remarkable US consumer confidence survey or leaked details for phase one of the upcoming infrastructure stimulus plan from the Biden Administration. Pessimists could have latched on to the continuing fallout of the Archegos forced unwind or the return to rising yield pressure. Instead, most of the prominent ‘risk’ metrics were treading water. Notably, the S&P 500, Dow and Nasdaq 100 were all easing lower this past session between -0.3 and -0.5 percent. No rotation here, just nervous anticipation or a stalemate of offsetting fundamental themes. 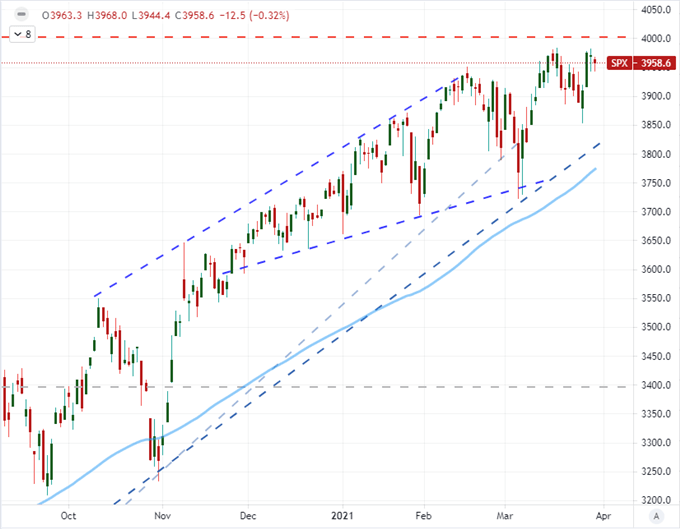 Looking across the spectrum of risk sensitive assets I like to evaluate for correlation and intensity, the picture was fairly uniform: little commitment to sentiment one way or the other among most measures. Yet, there were a few exceptions to that rule. One of the most impressive technical displays of a pair that typically aligns to sentiment was the USDJPY break through 110. Having cleared both 109.25 and 110, the pair has cleared two different measures of resistance on multi-year wedges. Yet, as should always be considered when there is a technical break at hand: what will provide the follow through. Most other Yen crosses have been little moved as of late. For the Dollar, modest gains with EURUSD are not proving universal or supercharged. This does not only seem lacking for a risk motivation, but the breakout seems flimsy for follow through regardless of the speculative priority. 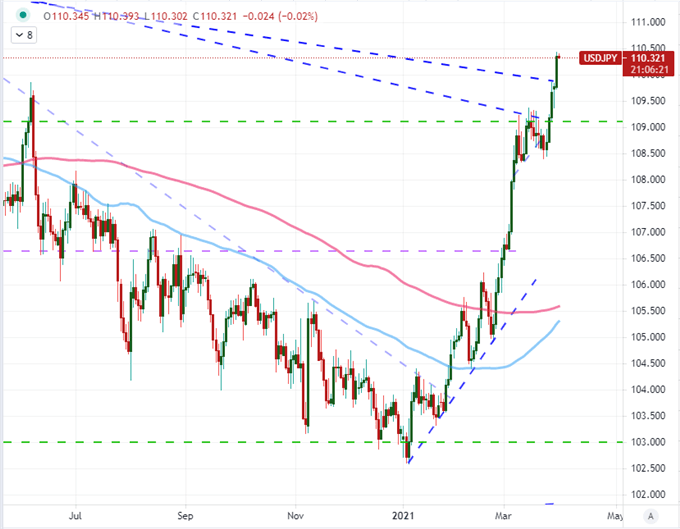 As we head into Wednesday’s trading session, there are a host of catalysts that could fight for control over general sentiment and the many assets tuned into the universal medium. On the bullish side, there is traditional economic fodder such as the Chinese PMIs, which increased sharply in March, or the IMF’s World Economic Outlook chapters. However, most eyes will be trained on the details of US President Joe Biden’s infrastructure spending scheme. The project will be rolled out in two phases, but this stage is expected to come in at $2 to $2.25 trillion and find funding by raising the corporate tax rate among other key income boosts. The leak would typically start a charge of optimism if it were latent in the market, but that didn’t occur this past session. Be prepared in case the news of another windfall liquidity infusion actually sees the market slide.

Alternatively, the ongoing fallout from the forced sale of positions held by Archegos is continuing exact pressure on the market. While it may seem quiet on the surface of the markets with measures like the S&P 500, there is pain felt in names directly connected to the headliner. Key tickers that were part of the fire sale (ViacomCBS, Discovery and a host of Chinese tech firms) have yet to meaningfully bounce after the sharp losses of the past four trading days. More recently, the banks that facilitated the gearing for Archegos may find some trouble. Goldman and Morgan Stanley who reportedly tipped the rapid sale seem to have bore out well. In contrast, Nomura and Credit Suisse seem to have absorbed significant losses of their own – with various ‘sources’ being quoted warning it could reach a possible multiple of annual profits. 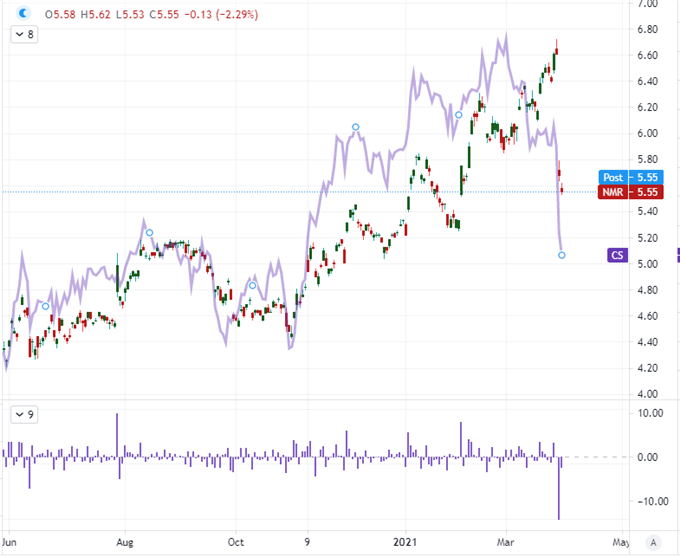 Another theme that I’m watching closely thanks to my regular monitoring of the US Dollar is the steady winds in yields and rate expectations. With the firm picture of growth that is reiterated frequently by officials, we have seen inflation expectations and Treasury yields rise once again. As of yet, the fear around central banks having to reverse their support of the open system doesn’t seem to be back in play, but that recognition could set in quickly. In the meantime, Fed Fund futures are pricing in 18 basis points worth of tightening through the end of next year – raising the probability of a full quarter-percent hike by that time to 72 percent. That may eventually turn into a problem for risk trends, but for the time being It seems to offer some lift for the Greenback. 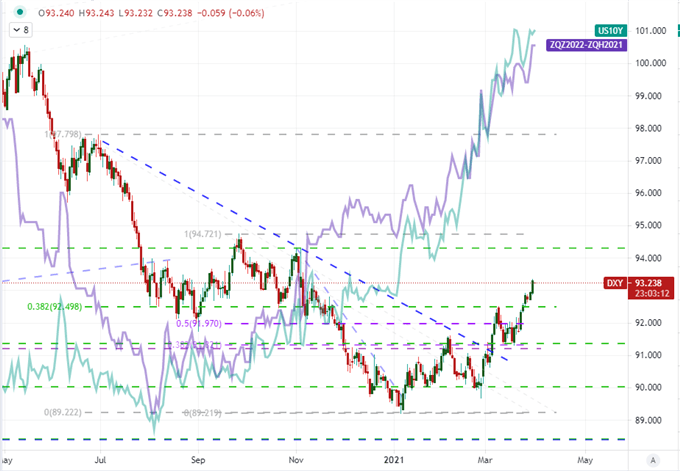 Systemic Matters That Create Problems for the Long Run

Following on that concern that central banks may be forced to normalize extreme accommodation, the cost could prove enormous. Over the past decade-plus, there has been an incredible escalation of external support infused into the system by major central banks meant to accelerate economic health but ultimately having greater effect in charging capital market assets to ever greater heights. It will be extremely difficult to eventually back out of this support role knowing how anemic actual rates of return are in the system. If the Fed and others are forced to reverse course, the pressure will be all the greater. 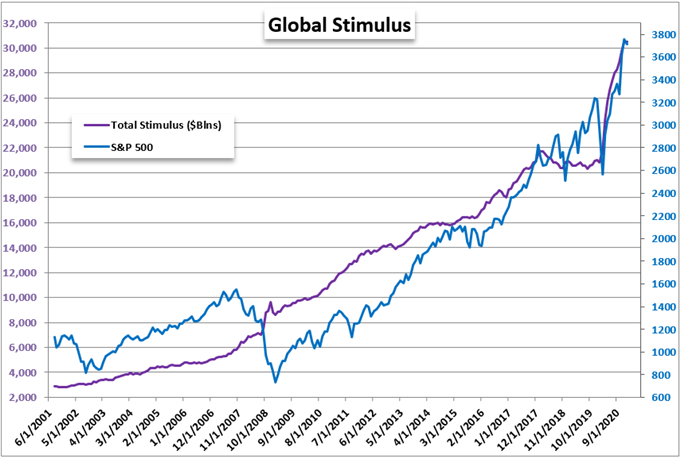 Though we don’t usually think of it that way, the central banks are overleveraged via stimulus. Governments are overextended through debt. Consumers and businesses are pushing extraordinary borrowing to help wade through the pandemic hardship. More traditional from this perspective, we have market leverage. Looking at brokerage ‘leverage’ at the NYSE leverage, we are pushing records. That is a critical contribution to the Archegos situation but it has also catered to the rise in retail participation and trends such as the flash in meme stocks (eg GameStop). As the warning goes: leverage is a double-edged sword and can amplify your losses just as readily as your gains. 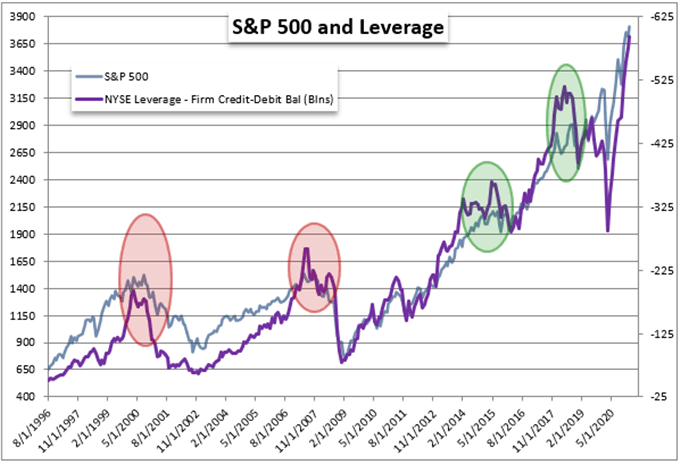 Finally, an encumbrance to market conviction and trend is the recognition of seasonal trends. While I am not a particularly strong adherent to the belief that historical norms will play out in a self-fulfilling prophecy manner, there is reason to these statistics averages. In April, volatility and volume tend to ease with combinations of 2Q capital redeployment, some holiday activity and the lead into mid-year doldrums. With this in the backdrop and the Western holiday conditions Friday through Monday, this could turn into a numbing agent for markets otherwise primed to run. 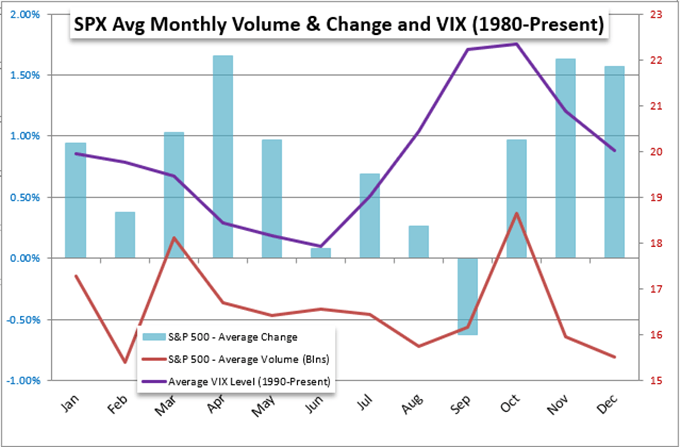