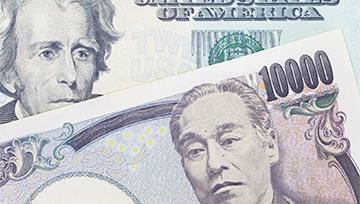 Risk trends seemed to maintain a broad correlation this past week, though that breadth wouldn’t necessarily translate into conviction. Intent is important to evaluate in the markets because most traders depend on follow through in their trading rather than the binary condition of a technical break. Establishing follow through over this coming week depends on the same general systemic circumstance we have lacked over the previous week: a clear and definitive fundamental lead to draw the bulk of the speculative market to a particular cause. Without that common drive, it can be very difficult to solidify conviction. And yet, that is exactly what is critical at this point when benchmarks like the S&P 500 close out this past week with a technical record high. On a daily basis, the close from the most heavily traded index – through derivatives – edged out the March 17th close by a mere 0.4 points. While impressive in print, it isn’t exactly a roaring technical endorsement that can override fundamental constraints to conviction. 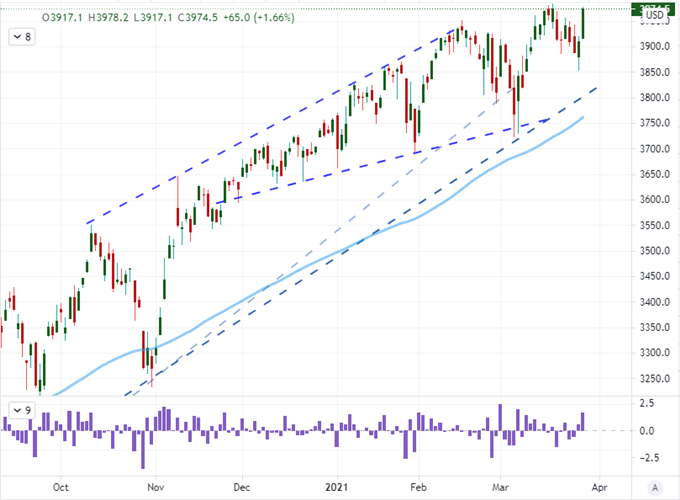 Look more critical at the shape of the risk trends we closed this past week on, there continues to be a notable slump in retail conviction. Though it has been tumultuous, 2021 has thus far proven the year of novice traders. The extreme end of the curve has shown favor for the likes of GameStop (one of the so-called ‘meme stocks’) while the cryptocurrency craze continues to draw a consistent appeal among those new to the financial markets. Perhaps raising the experience level but not pulling back from the extreme edge of risk taking, we have also seen an indulgence in high-finance. Trading app Robinhood has announced its interest in creating a platform that connects retail traders to IPOs (conveniently before its own offering) while SPACs now count WeWork, the company that failed to follow the traditional route over a year ago, among its rushed-to-market ilk. And, if we want to look only among the highest of risk measures, there is a notable preference building for ‘blue chip’ stocks in an index like the Dow relative to the tech-heavy Nasdaq 100 which has led the US equity markets for years. 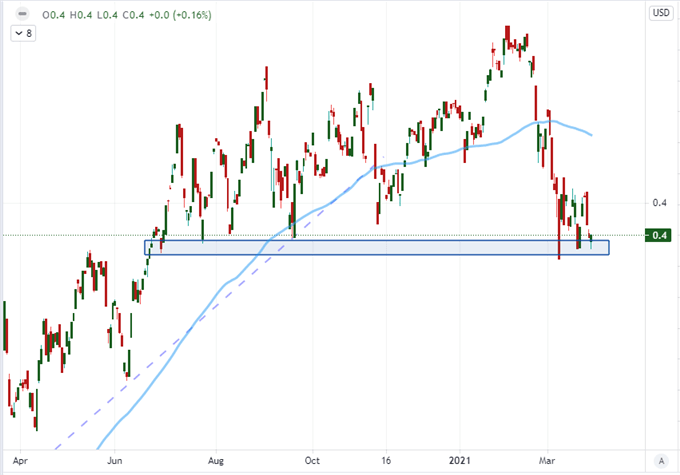 Looking ahead to next week, there is a clear sense of what critical themes will take up the market’s reigns. The rise and fall of retail interest is a theme to watch, but it is not a reliable charge. In more traditional channels, we have relative growth coming off this past week’s PMIs but the aggregate view of recovery is not exactly showing through the clouds of uncertainty. Yields has been a driver that has lost notable traction as well. Inflation fears have eased back in sheer headlines, but the benchmark government bond yields that drove much of that worry haven’t really relented. The US March NFPs release due Friday could take up this cause, but holiday trading conditions are likely to drain its potential. The top of my list for critical market moving events will be the infrastructure stimulus plan due from US President Biden on Wednesday. The program is said to be on the order of $3-4 trillion. That can buy a considerable amount of sentiment. 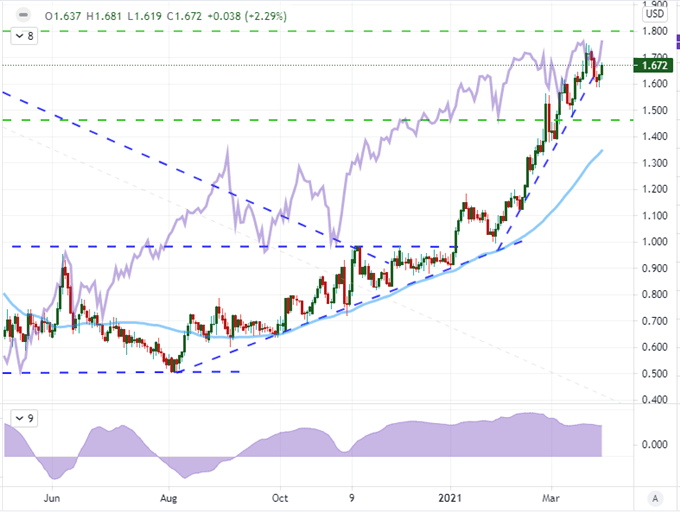 Considering that we are evaluating the overlapping (competitive and complementary) themes of growth, inflation, interest rates and risk appetite moving forward; it can be difficult to compare measures to establish what interest is catching traction – particularly in the early part of the development. It is even more difficult to evaluate this in a singular measure. However, one such measure that taps into all of these elements that is worth watching for the global macro-tuned trader is USDJPY. This pair increasingly caters to the carry trade concept with forward rate forecasts along with the BOJ’s efforts to anchor its own JGB yield. Further, it is a somewhat balanced safe haven exchange rate given they both fall on the same end of that spectrum. Yet, as intensity picks up in fear, the Greenback stands to benefit – while moderate risk aversion may actually favor the Yen. 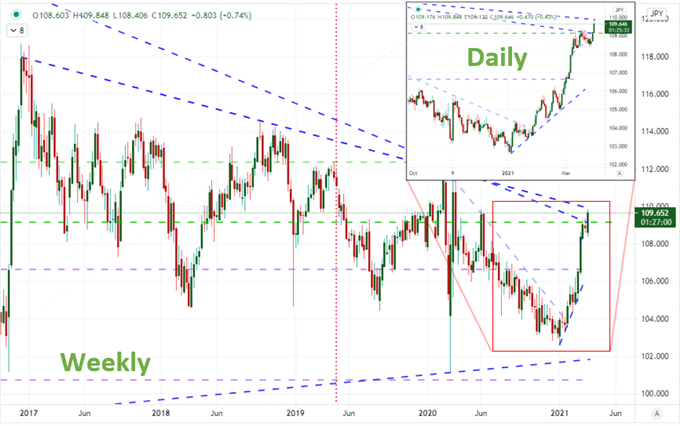 One a technical basis, USDJPY ended this past week with a remarkable technical charge. The pair cleared the combination of a multi-year Fibonacci retracement and resistance on an essentially symmetrical triangle that stretches back to 2013. The break of 109 is a meaningful development but 110 carries just as much prominence in its own right. We can appreciate that level on the daily charge, but weekly and monthly overviews truly highlight its importance to charge observers. 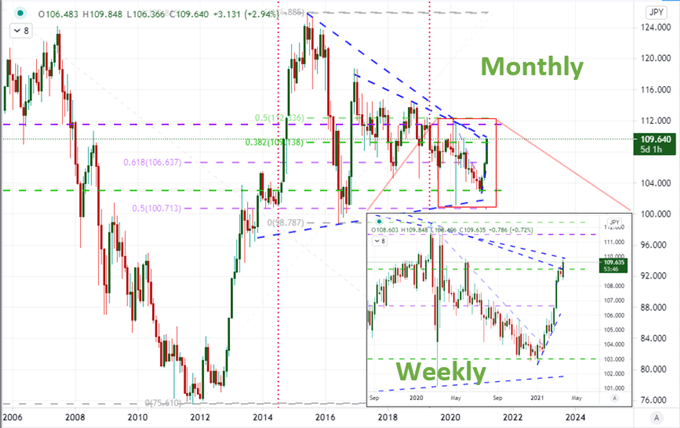 ‘Other’ Markets to Watch

While I’m generally more interested in tracking the systemic matters in the market – as that is where major and persistent trends arise – it is always important to observe corners of the market where opportunity for volatility, disparity or tend may arise outside the course of the system. USDCNH remains a must-watch for me as the rise of trade war pressure between the Western world and China recalls volatility of previous years. And, given the exchange rate is slowly turning off a seven month, steady bear trend; a steadfast political sign on a liquid exchange rate could prove a unique situation. Bitcoin is another asset that should always be on the watchlist so close to record highs and given the derivatives that are rising up around it. Another particularly interesting but familiar market to track on the radar is crude oil. The situation in the Suez Canal – leading to billions of dollars in lost GDP for the world a day – has connections to the commodity. However, I don’t believe the headline and market are directly linked to the point of timely rise and fall. Nevertheless, it seems to be contributing to extraordinary volatility on an asset that is frequently referred to as equal parts growth and speculative appetite. 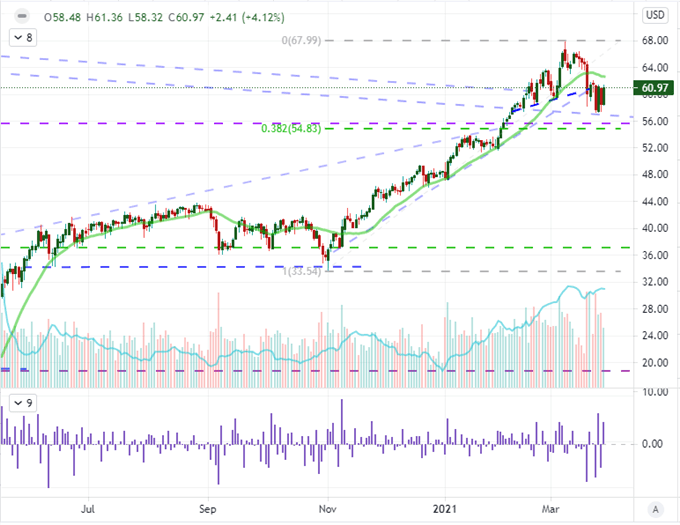