Not the Bounce Bullish Trends are Built Upon

With the markets under risk-oriented pressure through most of the week, there finally seemed to be some relent through the close of this past session. The ‘buy the dip’ mentality is still alive and well in the market, but opportunistic bulls should measure out the depth of conviction behind the turn in high profile benchmarks heading into Friday. From the Russell 2000, which has taken the heaviest beating through the first half of the week as a retail marker, a respectable bounce is reasonable. Yet, it is also worth noting that the timing happened to align neatly to a technical floor and without the confidence of any systemically important fundamental developments. Taking the tempo of the wind up out of the equation, the S&P 500’s own 0.5 advance paled in comparison to the Russell’s 2.3 percent bounce. It also didn’t have the benefit of an overt technical level to rouse chart traders to the call. 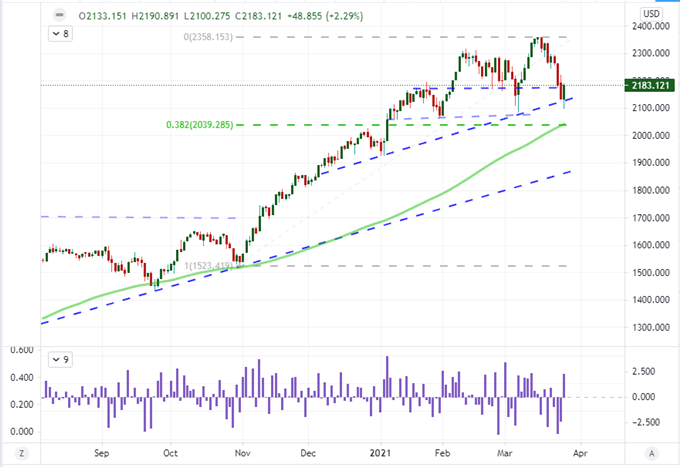 Another major US index with technical cue was the Nasdaq 100. Overall, its collective support is less definitive, but it is far more weighty between the 100-day moving average, trendline support and Fibonacci retracement to overlap 12,500 to 12,650. I consider technical analysis in large part a self-fulfilling prophecy; so the more over a level or zone is, the more market participants are likely to respond to either a hold and reversal or break. Though the NDX recovered from its opening print, it was still a lower close Wednesday to Thursday. Over the past five years, this has been one of the principal indices to pace risk assets – and even US stocks – with the mystique of representing value through disruption and profit stability through pandemic. The lackluster recover here versus both the Russell 2000 and the S&P 500 or Dow raises some concern. Risk trends are the most reliable driver, but few measures tap into that core as consistently as the Nasdaq. Retail interest represented by the Russell 2000 is prone to ‘flash in the pan’ action while the bigger SPX and Dow are usually tied to true growth. Neither of those seems practical as a reliable trend basis at the moment. So, what does that say about trend potential? 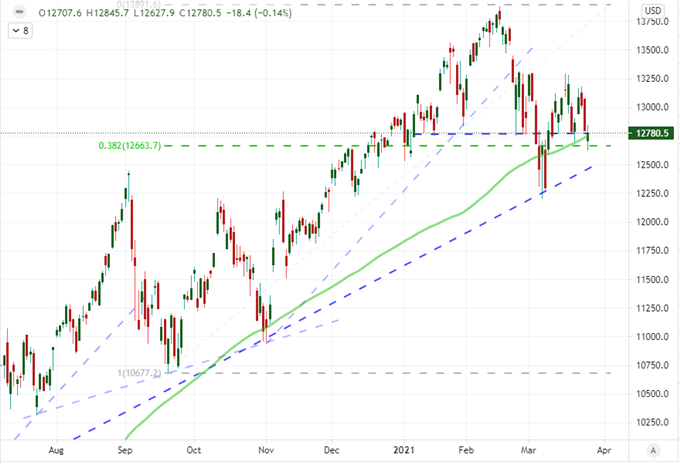 What Fundamental Well Can Sustain the Market?

Taking cues from retail interests, it was clear that the more errant speculative appetites were in full swing this past session. On the higher end of the totem, the SPACs index (SPCX) offered a bounce while junk bonds jumped above resistance amid reports that the high return asset class posted its biggest quarterly intake of capital on record. More remarkable for sheer movement though were the meme stocks. While there were impressive moves from the likes of AMC and Tilray, it was GameStop that regained its crown among the WallStreetBets Reddit board crowd with a 53 percent rally. I spoke too soon about the paper hands, but this looks more a ‘buy the dip’ approach than ‘diamond hands’. What’s the difference, greater appreciation for risk rather than holding through all drawdown and more likely that it will run out of charge. 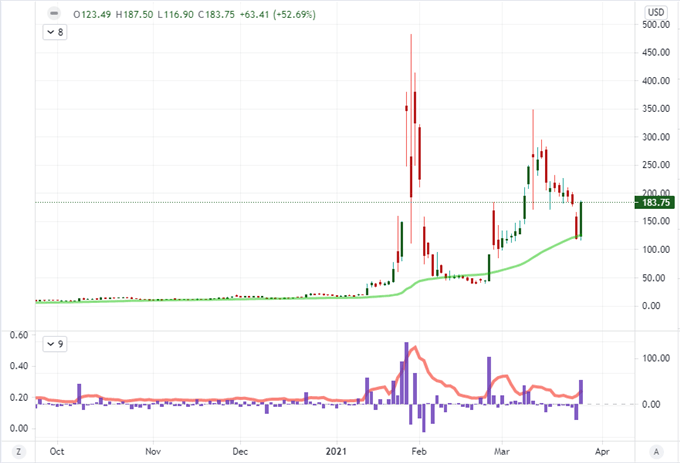 Risk appetite pulling itself up by its own bootstraps seems improbable without a more robust fundamental driver to carry sentiment forward. Growth expectations have been bolstered by data this week and central banks these past few weeks have fallen over themselves to reassure that they can’t imagine normalizing monetary policy through the foreseeable future. And yet, sentiment hasn’t responded to these remarks as they hit the wires. Perhaps more influential for the measured rebound is the moderate retreat in government bond yields the world over. The US 10-Year Treasury yield is back to 1.63 percent but it doesn’t seem to be moving much further without another urge. Though the Fed is playing down any intention to withdrawal extreme accommodation it has taken another small but measurable step this past session when it was reported that the bank would allow banks to pay dividends and restart buybacks. That approval is expected June 30 after the next stress test, but it is just another lifting of restrictions to keep cash on hand in the event of an emergency. Banks responded smartly to the news after hours. 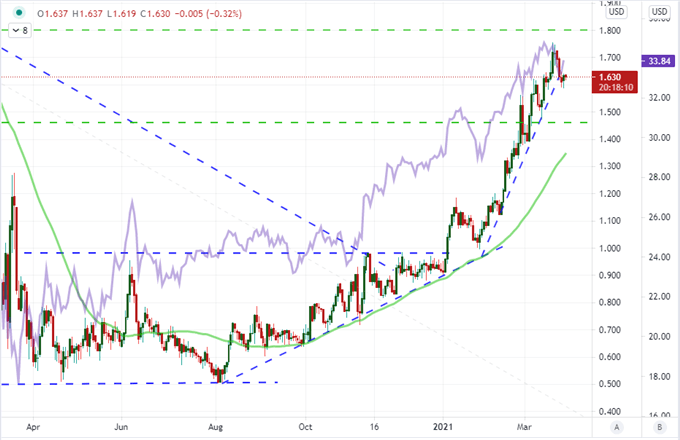 While I see much of the market trading as if it is simply following the path of least resistance with ranges interspersed with sparks of volatility, there are a few markets that carry more remarkable progress. The Dollar is one such high profile exception. EURUSD slipped its 200-day moving average to a four-month low Wednesday so it stands to reason that the DXY Dollar Index (which has the benchmark exchange as a principal component) would similarly overtake the same milestone this past session. Trading through 92.50, the currency has cleared a serious round of resistance. So, while its tempo may be reserved, it is a remarkable progress. In Friday’s session, the highlight of the global economic docket will weigh in for the USD. The PCE deflator is the Fed’s favorite inflation indicator and implied rates from the Fed Fund futures through the end of 2022 are projecting 15 basis points of tightening. Will this data reinforce the market’s skepticism of the central bank’s claims of no change in rate through 2023? 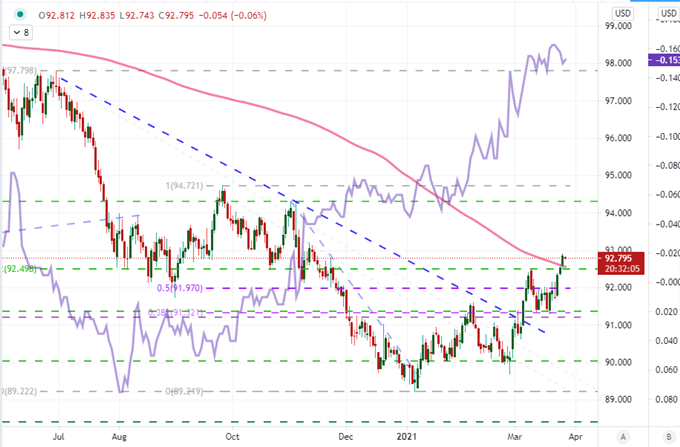 There are a few other markets that are worthy of keeping tabs on whether you intend to trade them directly or not. USDCNH (Dollar-Chinese Yuan) is slowly pressuring 6.55 and threatening a larger reversal as tensions continue to rise between the two underlying countries – reigniting a trade war that has simmered for a year-and-a-half. Bitcoin is easing back from its record high despite Elon Musk’s remarks that Tesla is already accepting the crypto currency for purchases in the US. An expected record options expiration on more than $5 billion in notional contracts Friday may be contributing . For top volatility candidate, crude oil continuing its extraordinary switchbacks. The average true range – realized volatility – is the highest in months though the commodity is struggling to pick a direction. The Suez Canal situation (blocked by a stuck shipping container and holding up an estimated $9 billion in goods shipments a day including crude) may actually weigh in here for a supply consideration. 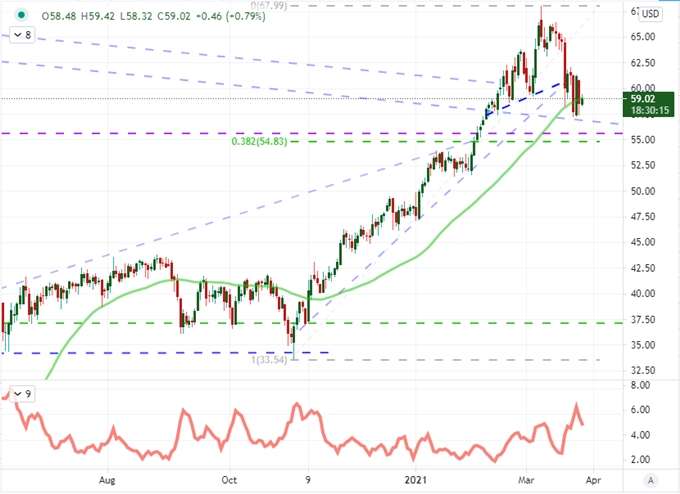