An Uneven Start to the Week for Risk Appetite

Fear wasn’t leading the markets out of the gate, but neither was risk appetite kicking in with the same kind of ‘buy the dip’ fervor that we have seen over previous months and years. There is a significant difference between a market that is committed to speculative build up and one that simply isn’t actively sinking amid fears. One of the most important distinction in features is the ability to build a meaningful trend. Across the spectrum I monitor for an overview of sentiment in different assets and regions, one of more remarkable performances for the bulls was the tech-leaning Nasdaq 100’s 1.7 percent jump. While still over 5 percent from the record high close a month ago, it was one of the more meaningful moves. Compared to the broader S&P 500, the NDX jumped smartly – likely indicating a more concentrated preference in risk exposure. Meanwhile, global equities were mixed, junk bonds jumped higher (still in a descending wedge) and emerging markets spun their wheels. If we gearing up for a return to record highs for US indices – much less a rising tide for all ‘risk assets’, I would expect broader participation. 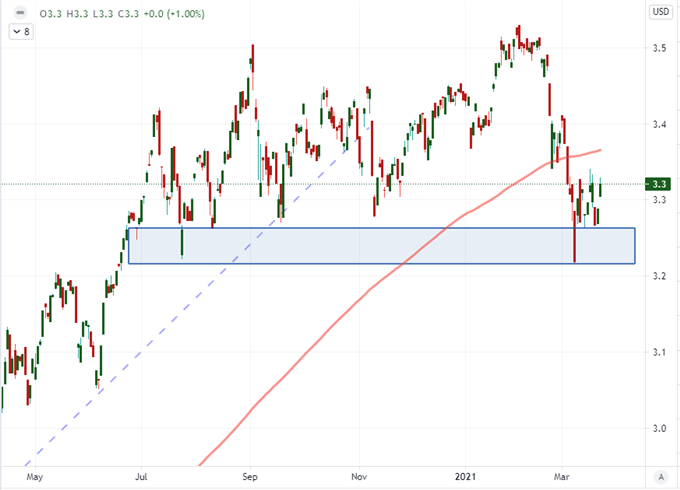 While we monitor the short-term developments in speculative interests, it is worth stepping back for the big picture for context to fend off the tendency to extrapolate expectations for the indefinite future and scope of the entire financial system from a narrow field of time and assets. This is a cognitive bias that I find myself succumbing to when not actively monitoring my habits. I counter this bad habit through fundamentals by evaluating event risk (scheduled and unexpected) in context of the broader themes. It is also important to do this on the charts. From the S&P 500, the 0.7 percent gain was underwhelming but fairly close to recent record highs. Yet, the perception of a prevailing bullish bias really comes into view when we consider that Monday was the anniversary of the post-Pandemic selloff low (March 22nd, 2020 was a Sunday) and the SPX is up nearly 76 percent over that period. Concerns over speculative excess, normalizing support systems and renewed fundamental tensions are all real. Yet, a bullish bias can still progress through complacency. 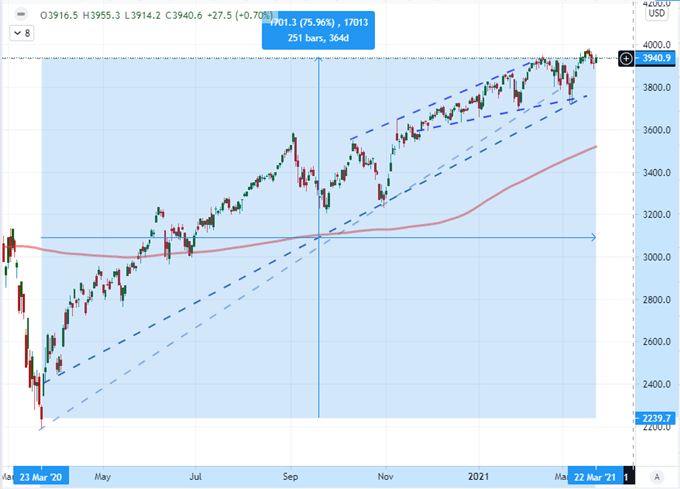 Key Themes To Watch That Aren’t on the Economic Calendar

While there are a range of noteworthy events penciled in for the global docket this week, some of the greatest fundamental potential rests with matters that don’t carry the convenience of a particular release time. One matter that can prove both a boon or a burden depending on the circumstances is the expectations for stimulus to make their way into the financial system. The American Rescue Plan – name of the $1.9 trillion stimulus program from the Biden administration – has been pushed out to the US economy quickly. The economic implications are clear, but markets are looking for the movement of the capital into the trading arena. The $2 trillion stimulus package passed on March 26, 2020 helped set the course of the current bull trend while the $900 billion stimulus signed by former-President Trump on December 27th extended the speculative reach. A swell in retail trading accounts results alongside search interest for terms such as “day trading”, “penny stocks”, “how to buy stocks” and other overt terminology.

Yet, now with the majority of checks already distributed and plans to finalize the remaining distributions, the same evidence of speculative charge is absent. I’ll keep my eye on search habits, growth vs value rotation, activity in Reddit boards and other measures of retail appetites. Also, be on the lookout for mentions of the infrastructure spending program the US government is working up which has rumored to be on the order of between $3 and $4 trillion. 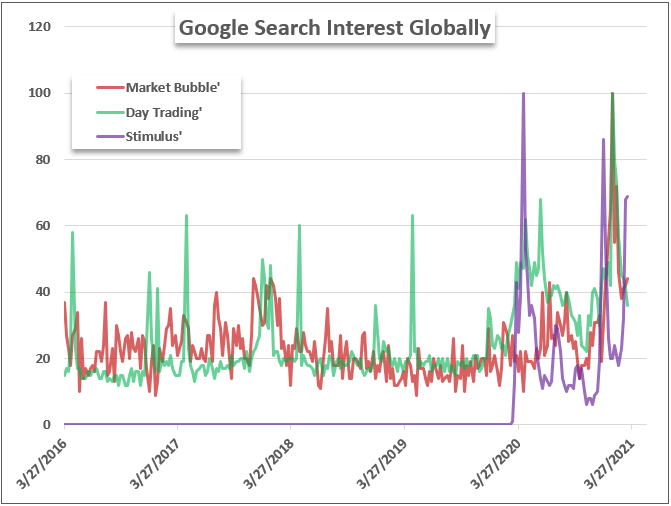 Another fundamental theme that doesn’t offer up the benefit of a distinct day and time for update is the potential for monetary policy withdrawal. Central banks are purposefully avoiding committing to this rollback for fear of triggering financial tumult but they are certainly beholden to developments in the market. Last week, very small moves were taken by the Fed and Bank of Japan to make it clear that we will not simply stay status quo forever – the Fed announced the end of a liquidity lever for banks and the BOJ backed away from a strict commitment to buy ETFs. That will warm up events like Friday’s US PCE deflator (the Fed’s favorite inflation report), but I am watching the measures of mood. An interesting update surrounding monetary policy expectations in the US was the survey from the NABE which showed 86 percent of the economists polled believe the Fed will hike rates before the end of 2023 which contradicts last week projections. Though, it does seem to align nicely to market expectations where Fed Fund futures are pricing in 16.3 bps of hikes by end of 2022 – 58 percent of the respondents to the same poll believe a hike would come before the close of next year. 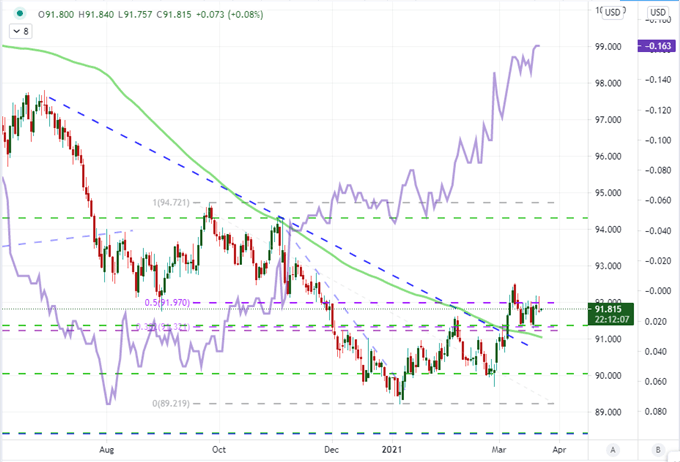 Other major fundamental themes are bubbling beneath the surface, but they so far don’t seem to capture the market’s fear or attention just yet. One such matter is the revival of the US-China trade war. For those that are very new to the market, they may not even remember that this was the key matter through 2018 and into 2019 – triggering exceptional volatility after extraordinary periods of calm. With the pandemic starting to fade with vaccinations, attention is starting to shift back to this unresolved matter. Rather than working towards a Phase Two of the trade deal that the Trump administration founded back in October 2019, we learned the Biden administration’s summit with its Chines counterpart in Alaska last week went poorly indeed. This week started with reports that the US was aligning with some allies to further sanctions against China. I will be watching USDCNH to see if the fight shifts to this exchange rate, but suspect the effort to maintain stability in capital markets will not track well as a temperature gauge.

Chart of USDCNH with 50 and 100-Day Moving Averages (Daily) 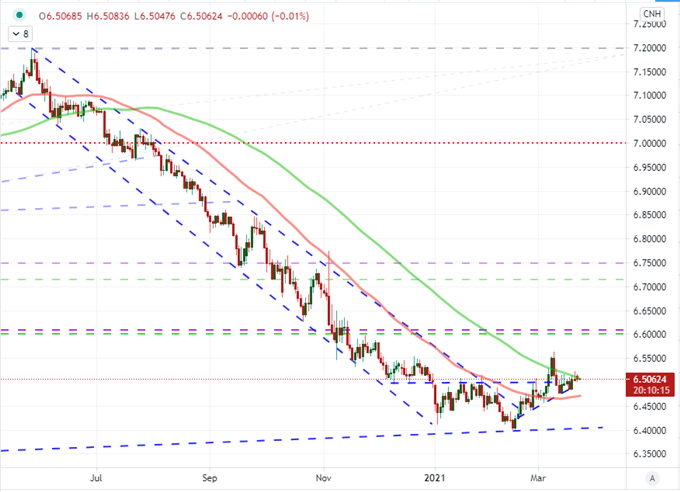 A more unusual development to start off the trading week was the dramatic tumble from the Turkish Lira. The currency collapsed 15 percent against both the US Dollar and Japanese Yen before authorities presumably stepped in to steady the market. The trigger for the sharp move in the emerging market currency was difficult to miss. It was announced over the weekend that Turkish President Erdogan had fired central bank governor Naci Agbal. The latter’s policy approach of fighting high inflation (approximately 15 percent) by raising rates aggressively helped the Lira but it did not seem to sit well with the President domestically. This can be a tale for global markets on neglecting inflation (though a more extreme example) but it is also a reminder of the situation around carry – perhaps why pairs like EURJPY opened the week with a sharp gap lower.

Chart of USDTRY with 1-Day Rate of Change (Daily) 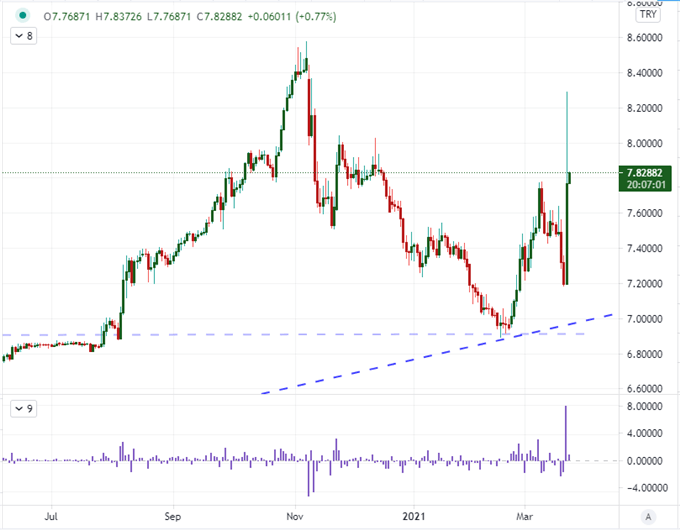