There was a wave of favorable fundamental developments this past week – from a massive stimulus authorization to a timeline to reopen the US economy – which in turn charged risk assets. While there was a considerable breadth in the assets that benefit through this past week, there were assets with particular features that seemed to outperform. For one, US-based capital assets did particularly well with the blue-chip Dow leading the way with a six-day consecutive rally (matching the longest advance in 7 months) to fresh record highs. Meanwhile, 10-Year Treasury yields surpassed 1.60 percent and USDJPY closed in on a 600-pip climb for 2021. And yet, that same mix tabs into some fundamental concerns that can make a simple ‘risk on’ perspective hard to maintain. 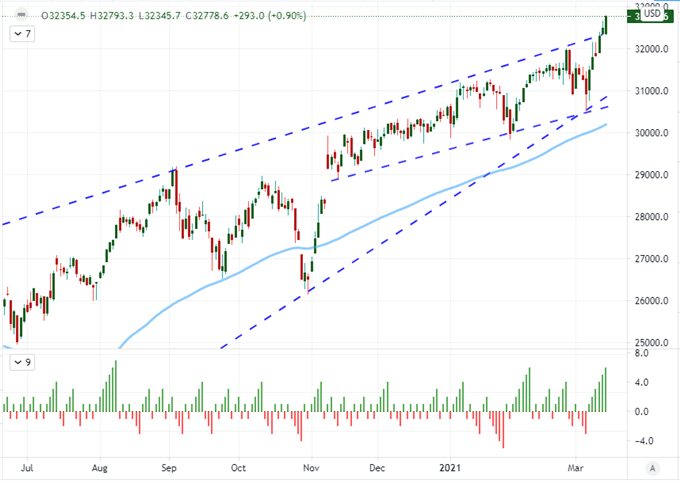 One of the most accessible disparities in performance for close complementary markets is the growing divergence between the blue-chip Dow index and the tech-heavy Nasdaq 100. Through the pandemic (and even further back), tech stocks have outperformed sectors like industrials. During the shutdown, Americans were pushed online while stimulus helped modestly to maintain levels of consumption. In contrast, the halt in traditional economic activity that required more in-person interaction has seen the likes of CAT, GE and AMC struggle to recover. In the past few weeks, the gap between these two indices has widened to levels not seen in a long time. In fact, the 20-day correlation flipped negative for the weakest connection since December 2017. Meanwhile, a slip from emerging market measures suggests concern over ‘taper’ has not truly diminished. What are the ground swells that we should be keeping tabs on for trade influence. 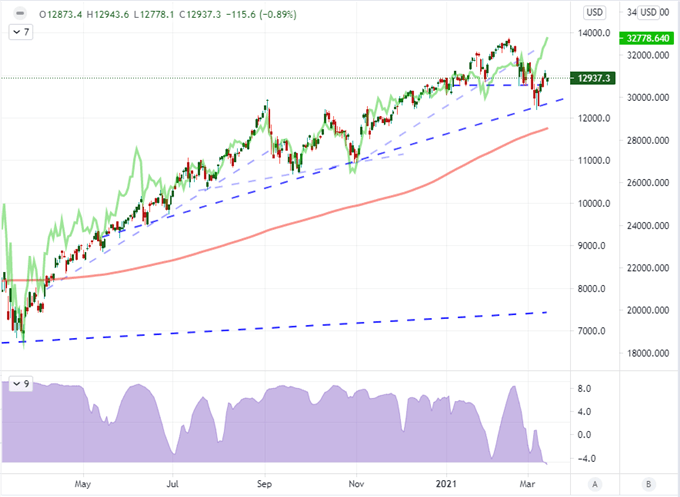 The Trouble with a Robust Economic Recovery: The Loss of Stimulus

The US consumer sentiment survey from the University of Michigan to end this past week summarized the situation nicely. With a time frame to have all adults vaccinated by May 1st alongside the glow of the recently signed $1.9 trillion stimulus program, it is easy to see the light on the horizon. However, as with most efforts to offset a massive shock to the system, there are unintended side effects. The enthusiasm around the timeline for vaccinating the population is not as complicated beyond the risk of confidence overshooting commensurate market levels. On the other hand, the most recent swell in stimulus can represent a deeper disturbance. This is perhaps where the EEM emerging market ETF’s performance draws from. It was this segment that took one of the biggest hits back in 2013 during the ‘taper tantrum’. 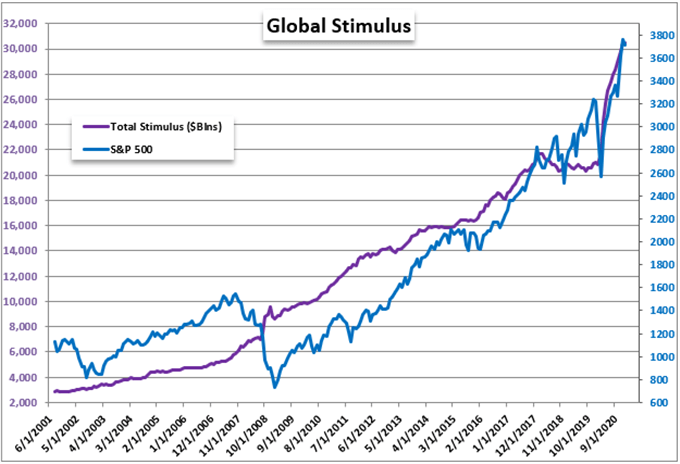 As the economy continues to recovery, your typical economist would expect inflation pressures to rise. That climb in prices of goods and services changes the calculus for policy groups maintaining support. Normally, all else being equal, central banks and governments would be looking to sustain their support structures to amplify expansion to a comfortable level before they slowly withdrawal support for the economy to shoulder its own risk. The need to normalize (a reduction in accommodative monetary policy) becomes more urgent as inflation picks up considering steady inflation is one of the Fed’s primary mandates. So, while the long-term and big picture outlook for traditional growth may climb, the immediate risks to stimulus that is at the core of risk appetite represents a systemic threat to near-term positioning. 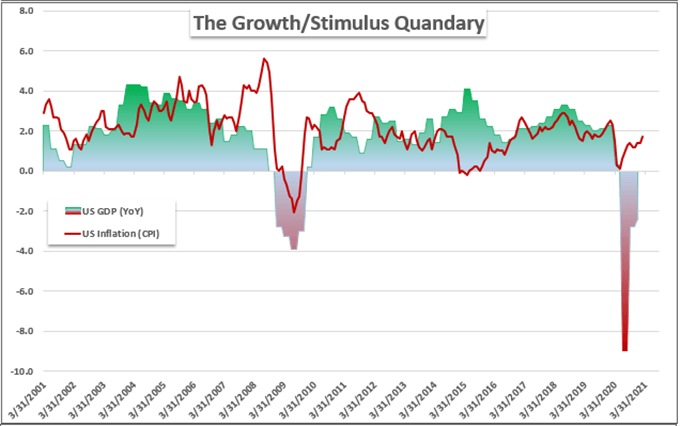 In practical terms, as the outlook for inflation pressures starts to flash warning signs to the central bank; the market will start to anticipate the first stages of extraction. Allowing balance sheet assets to expire without reupping the exposure was the first step taken back around the time of ‘taper tantrum’. Back then, confidence was badly shaken from recognizing there was limit to the support that would be offered. As we head into the new trading week, inflation forecasts in breakeven rates for the next years have pushed above 2.5 (highest in 13 years) while the US 10-Year Treasury yield has returned to 13-month highs after a brief wobble. That is the scene set for the Federal Reserve’s rate decision on Wednesday. 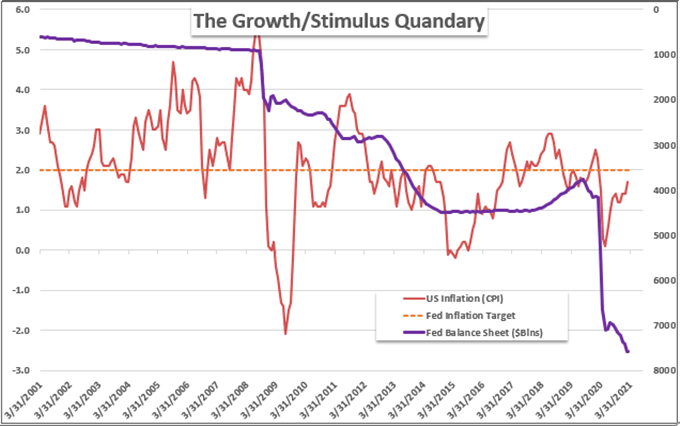 Overall, there are slew of central bank rate decisions over the coming week, but it is the US authority’s gathering that represents the biggest macro potential. At its last gathering six weeks ago, the Fed suggested it was holding a steady course of extraordinary support without a definable timeline for eventually tapering. Yet, the building inflation expectations and a rising 10-year Treasury yield (which prompted other central banks to offer more) have led investors to contemplate what the end of the dramatic expansion in stimulus this past year would look like. It is around this fear/anticipation that we have seen Fed Fund futures lift speculation for a rate cut (below is the pricing through December 2021) and rumors build that a change to the infamous ‘dot plot’ was impending. If the FOMC’s summary of economic projections signals the beginning of normalization in subsequent years an impact for the Dollar and Dow is likely. 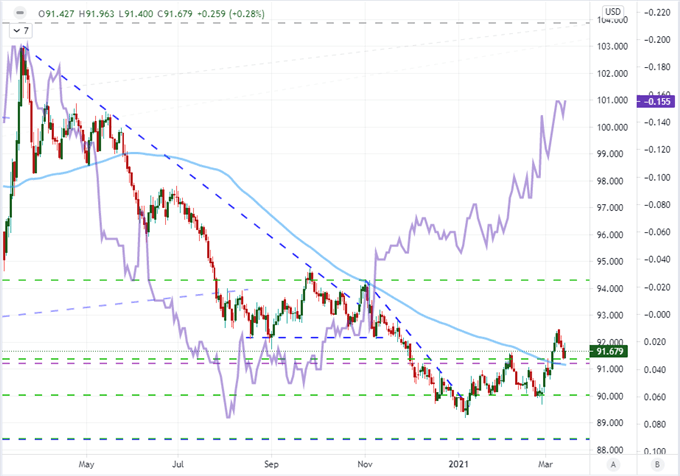 There is a significant skew in possibilities for risk-sensitive assets and Dollar pairs depending on whether the Fed gathering is surprising or not. This creates fairly straightforward benefactors and victims from the S&P 500 to the Dollar to gold . Yet, there are perhaps outlets to this theme that can skew scenario potential or follow a singular course regardless of the course. USDJPY seems to hold some of these rare attributes for next week. If the market is reassured by the group’s message, general risk appetite could bolster the ‘carry trade’ effect. Alternatively, if a surprise hawkishness comes out, the yield projection for the Dollar could amplify the readoption of the currency’s safe haven status. 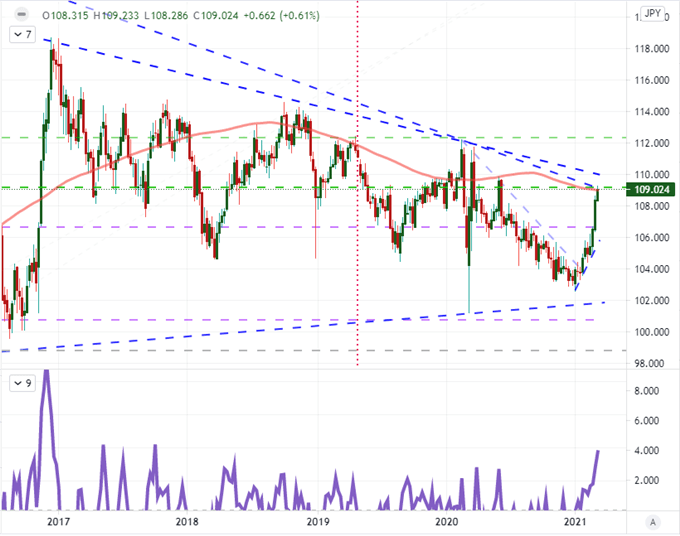