Another day, another sign that new COVID-19 cases are dropping in the United States. Hospitalizations and deaths are falling dramatically, per the COVID-19 Tracking Project, in part because of the accelerating pace of vaccinations. According to Bloomberg News, the US is now averaging just above 2 million vaccinations per day. Going into the Thursday-Friday-Saturday reporting window, which has typically produced the highest reported vaccination rates, the US is well-footed for more positive news on the pandemic front. 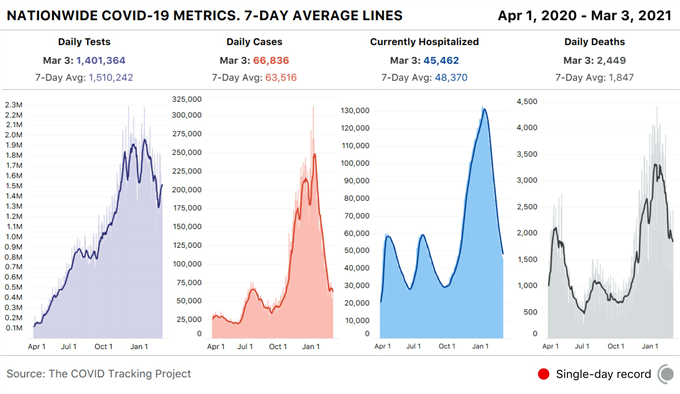 The Federal Reserve, among the other major central banks, has been adamant that it will not be raising interest rates any time soon, but global bond markets have other plans. The spike in US Treasury yields without corresponding signaling for tighter monetary policy amounts to something of a ‘taperless tantrum,’ with rising rates provoking an acute episode of asset reallocation, particularly out of growth-linked equities. 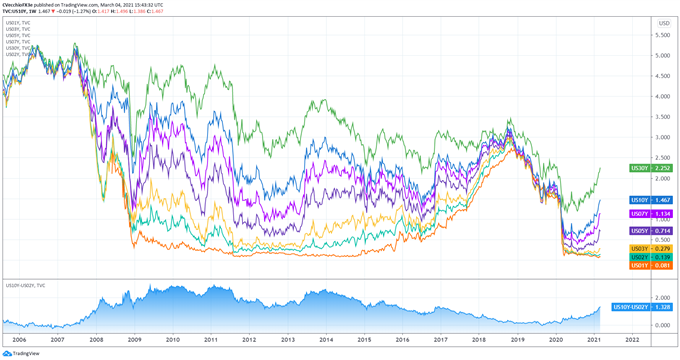 When Fed Chair Powell gives his speech later today – the final one among Fed policymakers ahead of the pre-March Fed meeting before the media blackout window begins – it’s not out of the question that the Fed chief hints at potential policy changes to temper the rise in rates. There’s been talking of a ‘WAM extension,’ or a weighted-average maturities extension, which is effectively another Operation Twist of sorts.

But Fed Chair Powell may opt for a simpler solution to prevent a further backing up of yields: extending the supplementary leverage ratio (SLR) requirement for banks, which have been exempted from counting Treasuries and reserves against their capital as a percentage of total assets for the past year during the pandemic. If the SLR requirement rolls off, US banks will be forced to increase their capital holdings and/or reduce their Treasury holdings, and a wave of Treasury selling could push yields higher again. Simply announcing an extension to the SLR requirement may remove a potential factor for more volatility in US yields in the near-term.

The February US jobs report will be released tomorrow morning at 8:30 EST/13:30 GMT, and expectations have started to firm after a few weeks of improved US jobless claims data. According to a Bloomberg News survey, consensus forecasts call for a gain of +182K from +49K previously, with the unemployment rate (U3) due in at 6.3% unchanged. But the February US ADP employment change report came in below expectations (+117K actual vs +177K expected), increasing the odds that we may have another soft labor report around the corner.

Regardless, given the scope and scale of the Biden fiscal stimulus package, estimates for both labor market and broad economic growth are increasing at an accelerating rate for the second half of 2021. The release of the February US NFP report may help refocus markets’ collective attention on the Biden stimulus package (for the past year, iterative releases of the weekly and monthly labor reports has typically revived stimulus chatter among market participants).

See the DailyFX Economic Calendar for the full slate of data releases into the end of the week.