Through the end of this past week, the markets were positioning for a potentially systemic downshift. Coming off of record highs, the US equity indices were leaning heavily on the progressive technicals that had carried the markets up from their post-Pandemic lows. Yet, when push came to shove, the speculative rank was not ready to flip the markets into a progressive deleverage that spread to the broader financial system…at least not yet. Concern over growth and returns that are now finding lead in the course of global sovereign debt yields have shifted interest in social trends in capital markets back to core matters like practical yields. For me, the US indices still stand as functional guides to sentiment. The S&P 500 took the lead with a prominent bounce on technical support founded on the combination of the 50-day moving average and trendline support stretching back to the swing low post pandemic (in March 2020). The index’s rally was its biggest since June 5th, and it drew fellow indices along with for the ride. Notably, there was a further advantage for the small-cap Russell 2000 relative to the S&P 500 as well as the tech-laden Nasdaq 100 compared to the blue-chip Dow. 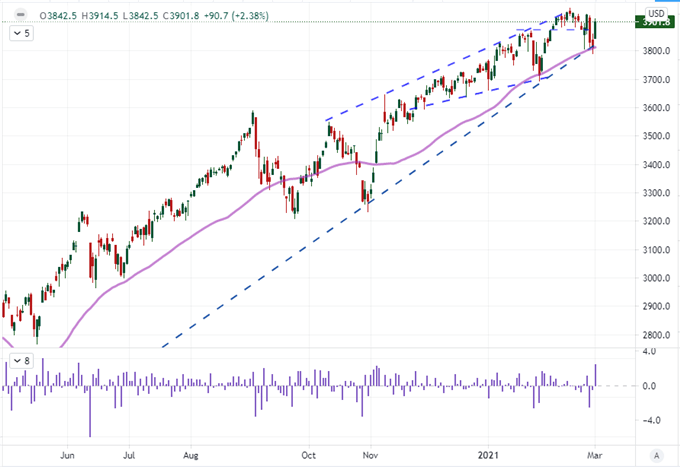 Looking more broadly than the US indices, there was a notable jump in ‘risk-sensitive’ assets across the board this past session. Global equities were broadly higher with sharp rallies from the likes of the German DAX, UK FTSE 100 and Japanese Nikkei 225. Beyond stocks, there was a similar rousing from emerging markets, carry trade, commodities with a speculative bent and high-yield fixed income among other measures. As far as my evaluation of speculative appetite is founded on the correlation and intensity of these different measures, Monday’s development was a significant one. On the other hand, the charge of the day’s session almost universally fit into the broader range of the past week without systemically shifting the debate. I’ll point out that retail CFD traders (via IG) have flipped their positioning on the S&P 500 to a net long position for the first time since the pandemic low was put in. This is a contrarian reading at the extremes, but it would be presumptuous to say the markets have overindulged at this point. 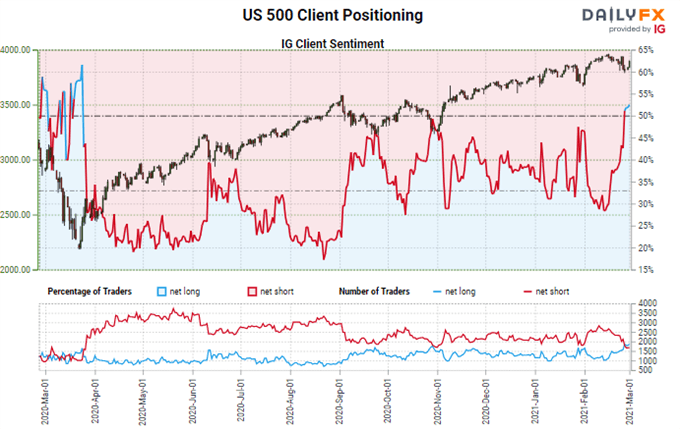 One of the bigger fundamental leads to carry the market forward this past week was the global rise sovereign bond yields. The implications from the market’s perspective were not an enthusiasm for growth but rather expectation for inflation and a forced response from the world’s largest central banks. Taking up the charge of risk aversion through this past week, it was only reasonable that a slip in global 10-year bond yields Monday would earn a bounce from the capital market leaders. Notably, the benchmark yield for Germany, the UK, Japan and Australia among others checked lower to open the Monday. For the US bond, the move was already registered the previous Friday and follow through was notably absent to start this week. Is that a fire gap for a true risk appetite recharge? I will note technically that the rebound from all the major risk benchmarks still fall naturally within their past few weeks’ range. The potential for a systemic shift is there, but we have yet to secure such a view. 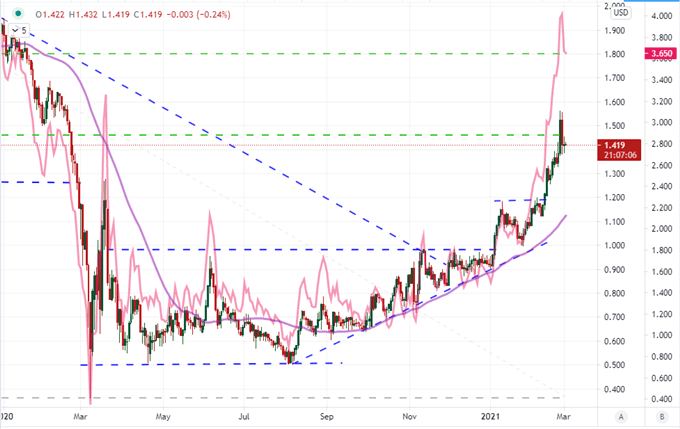 The rise in yields is a problem for global investors given the weight placed on capital gains which have taken an acute priority over ‘income positions’ as traditional rates of returns have all but disappeared. With central banks cutting the foundation for yields/dividend/income to levels not seen in generations, the interest in finding a ‘buy high, sell higher’ position has turned into an outright necessity. Months – if not years – of this normalization in risk and exposure in turn makes market participants particularly sensitive to changes in the undercurrent. Naturally, the rise in yields spurred fear over a ‘taper tantrum’ – a reduction in central bank support, this time forced by a resurgence in inflation. In fact, the Google search interest (fear?) of this phenomena hit a record high in the most recent week’s update. 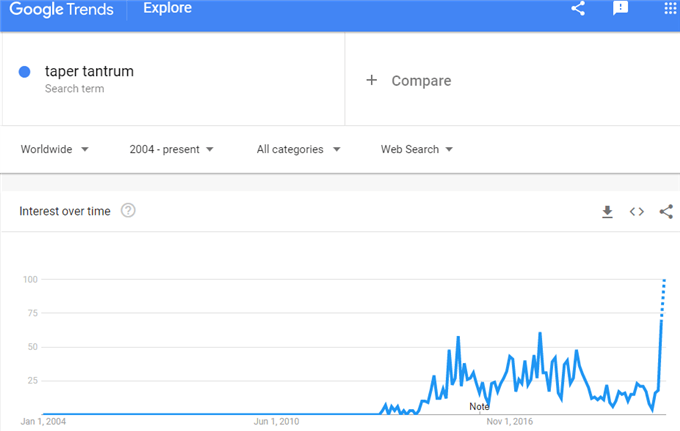 Meanwhile, the speculative command over decision making – along with the errant influence it encourages – is still showing its sway over market participants outside pure price action. Traders who have had to compensate for anemic rates of return by capitulating to the pursuit of capital gains are finding solace in the collective reassurance among participants that we have seen take traction in various assets. Most recently we have seen the LaserEyes hashtag arise around Bitcoin (targeting $100,000) and ‘diamond hands’ born of the WSB Reddit board, but these seem to be simple variants of the ‘buy the dip’ mentality so prevalent over previous months and years. Despite that appetite, the creeping fear of a ‘market bubble’ is tracking higher in tandem like a game of speculative musical chairs. 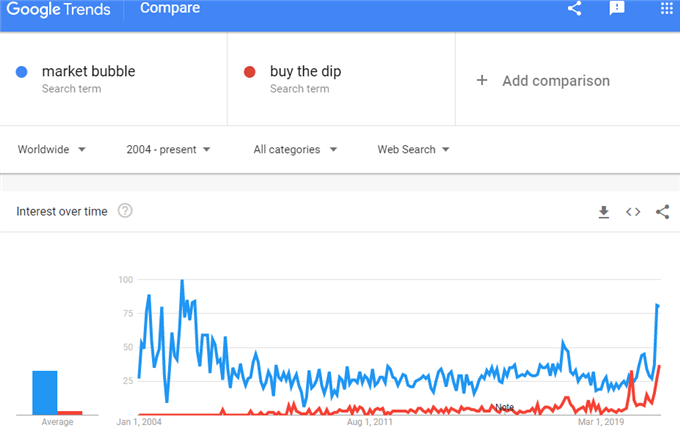 Moving into Tuesday, my attention will of course tracking indices which have defaulted to support of unchecked risk taking; but some of the benchmark FX crosses should be considered alongside other measures. EURUSD remains one of the most important milestones in my regular watchlist thanks to its liquidity as well as its multi-faceted role. The Dollar as a safe haven is a played down influence in this cross, but an exceptional charge will nevertheless push this pair to pick a side. As for the yields, the fear of tapering is a gauge of which major central bank feels its options are so diminished that it has to succumb to extreme measures. The ECB has a history of ramping up its efforts not only to stir growth and inflation, but it acted back in 2014 to try and deflate the exchange rate – from 1.40 at the time. Is there enough here to push EURUSD below 1.20? 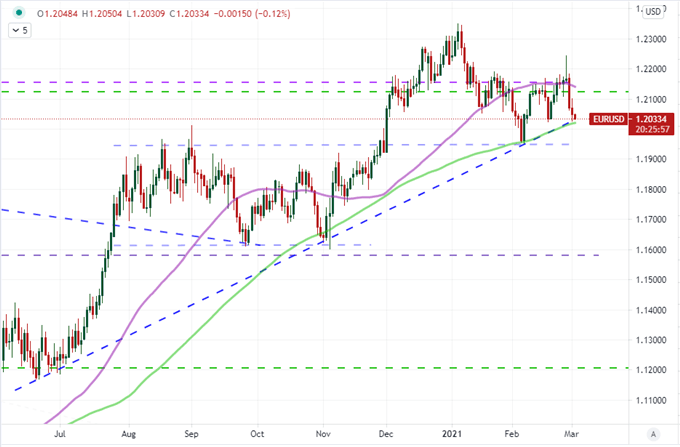 If we are shifting our focus from thematic to discrete event risk, there is no more put-upon major this week than the Australian Dollar. We have already started off the week on an uneven footing with the Australian February manufacturing activity report from AIG advancing from 55.3 to 58.8 while China’s (close economic partner) official factory and service sector activity figures dropped to their lowest levels since last February (50.6 and 51.4 respectively). This morning, the RBA pushed a defense of its exceptional accommodation – remember, they are still relatively new to the extreme support relative to larger counterparts – which did little to alter last week’s surprise three-year sovereign bond auction in response to fears over rising yields. With 4Q GDP data head, the fundamental run continues.

Chart of AUDJPY with 50 and 100-Day Moving Average (Daily) 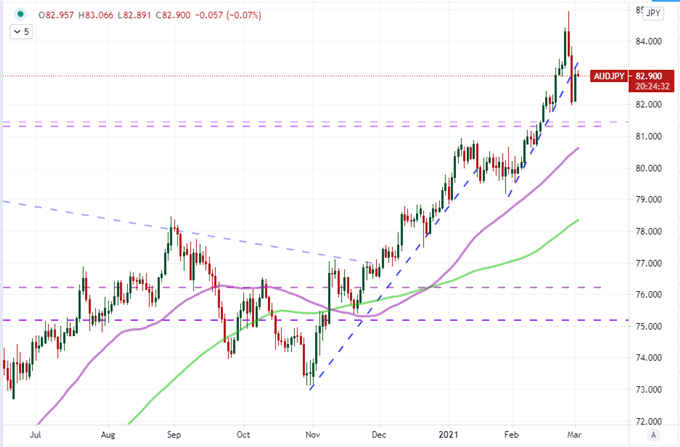