Some of the key players in the extreme volatility event through the second half of January were testifying before the House Financial Services Committee this past session. For many, the basic drama expected between the buttoned up politicians and the unpolished responses from Keith Gill (nom de plume Roaring Kitty) was the highlight of the day. The back-and-forth was certainly worth registering given Treasury Secretary Yellen has said an SEC report on trading practices during last month’s explosive trading was coming; but for me, this only intensifies the focus on the market’s extreme position with risk exposure. On the one hand, a benchmark like the S&P 500 ETF (SPY) is leveling out at record highs with the most reserved 8-day trading range in 13-months. Yet, with the context of the JPMorgan reporting investor complacency is at a two-decade high and the Fed’s minutes suggesting a “notable” vulnerability to financial stability, there is a nefarious perspective. Market participants – traders and investors alike – should be mindful of their exposure to ‘risk’ and keep close tabs on the core measures. 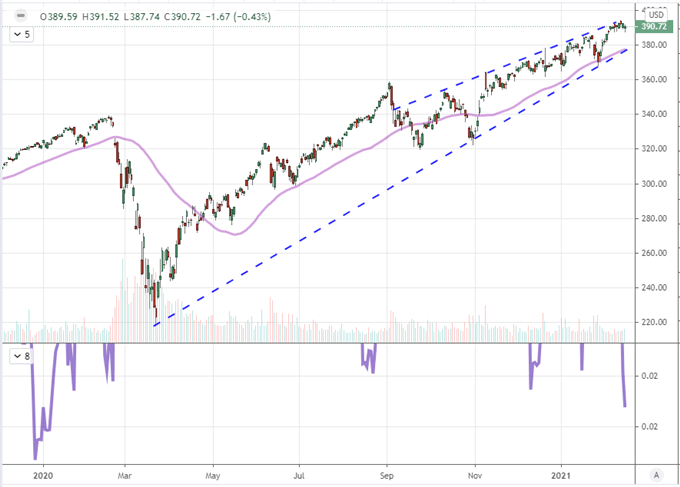 Meanwhile, at the very edge of the speculative drive, there has been a clear breakdown in the performance of the reckless speculators’ favorite assets. Looking to the top assets being discussed in the infamous WallStreetBets Reddit board, all of the top mentions were underwater. From Palantir Tech to GameStop to Aphria, the board was painted in red. Ironically, the most robust measure was the SPY ETF which is the standard for market exposure for the past decade. In fact, between this recognizable measure, Apple and Tesla; it seems there is a slow shift back to the standards within the top liquidity category. Perhaps the collapse after the epic build up in these various, thinly-traded names has chastened a group of investors that are both new and reassured by the massive infusions of liquidity that the entire financial system is floating on. Then again, perhaps they are just waiting for the next swell. 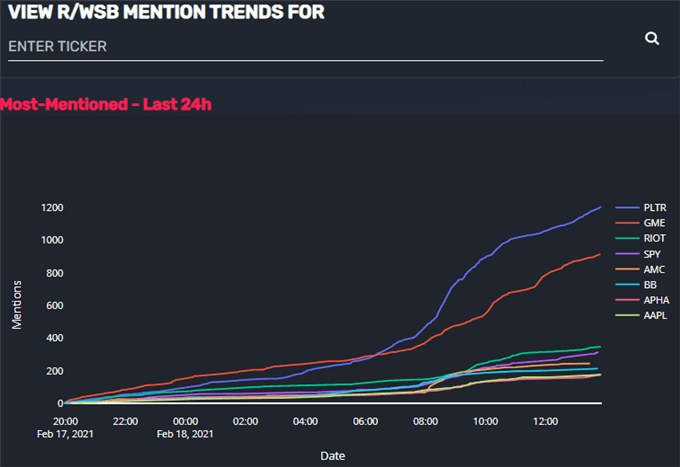 While we have recently seen blame for speculative excess cast upon novice traders in the Reddit boards, no commission brokers like Robinhood and liquidity providers like Citadel; it is important to recognize that these conditions are not novel to 2021. Certainly the post pandemic recovery in capital markets is borderline manic, but excess has been a clear feature of the backdrop for years. I believe this to be a side effect (charitably labeled ‘unintended’) of the persistent reinforcement of stimulus from central banks and now governments. The consequences of this largesse have been tolerable, so authorities continued to add on; but now the specter of actual cost is starting to peak through. Inflation expectations are starting to rise in global 10-year yields and breakeven inflation rates. The question I have is whether the next charge of $1.9 trillion in stimulus in the US (which the House will vote on at the end of next week) is already priced in for price pressures and the Dollar’s drop? 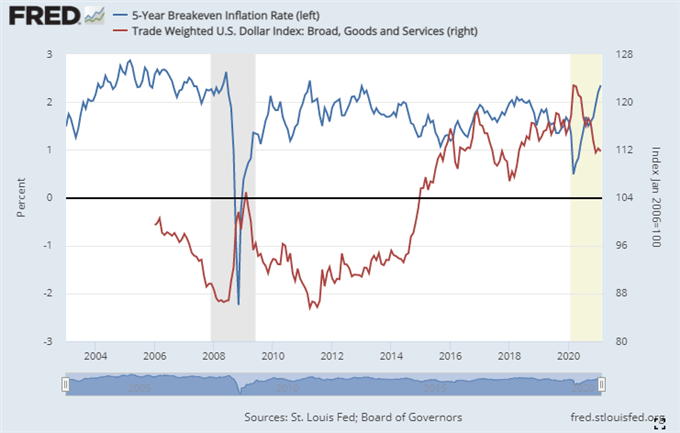 Top Dollar Pairs to Watch Friday and Beyond

With that uncertainty in mind, the Dollar continues to track out an unclear path. The Greenback this past session saw its effort at rebound cut down with a broad retreat amid data that showed jobless claims bounced back up to 861,000 filings. I don’t think the data is as influential as the general lack of clarity on what matters and how it is driving the Greenback. That suits EURUSD’s dense range conditions. The benchmark pair is ping-ponging between its 50-day and 100-day moving averages which also happen to coincide with range and trendline barriers. 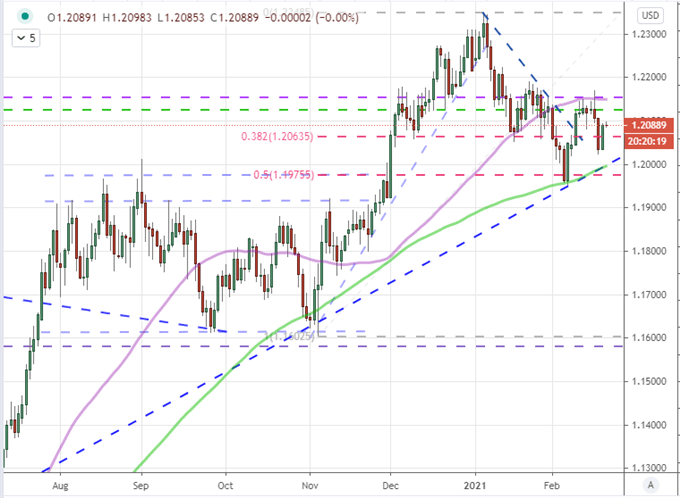 If you want to weigh technical cues against conviction, I would suggest keeping a close eye on GBPUSD. ‘Cable’ has climbed above 1.3900 and in doing so, has overtaken a trendline that stretches back to the Great Financial Crisis. If a textbook technical assessment were all that mattered, this could be construed as a critical break with the commensurate trend shift. However, fundamentals and market conditions should quell that assumption. Sterling is in little position to simply run while the broader FX markets are showing few ‘natural’ trends of any strength. I’ll keep tabs on this effort no doubt; but my assumptions are for the same moderation we have seen so many times before. 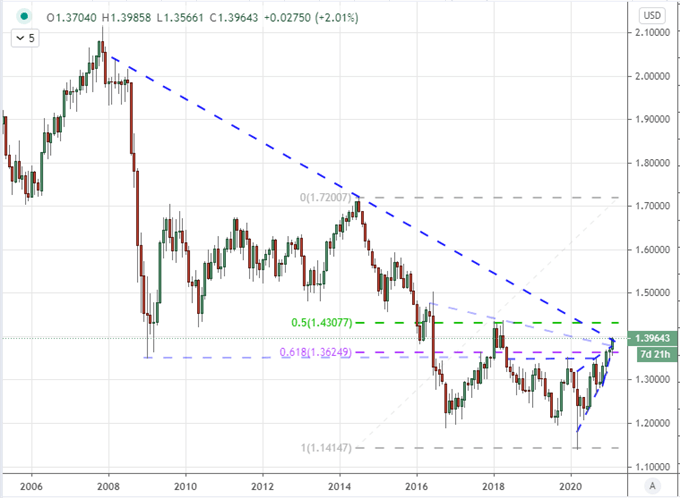 Another Dollar FX pairing I want to throw a spotlight on is USDCNH. This is not what I would consider a typical market-derived cross, but its technicals are remarkable while its implications for global fundamentals are profound. The pair broke the upper bound of a 9-month descending trend channel this past session. Further, USDCNY (onshore Yuan) is working on its first bullish month in nine months. That would end the longest slide since February 2012 – when the offshore Yuan began trading. Considering this comes on the same day Secretary Yellen said tariffs would not be immediately rolled back, this is a pair worth watching. 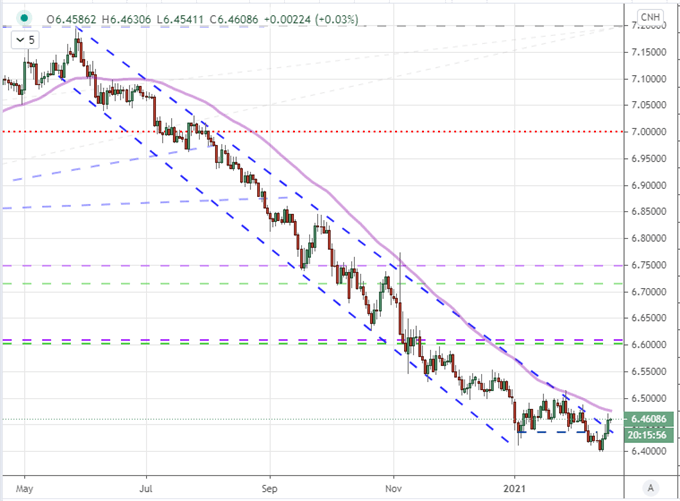 Though not an exchange rate, it is also worth pointing out that a few other important Dollar-derived measures are in various stages of performance. For Gold, the precious metal is leaning on the mid-point of its past year’s range which would seem to favor the Greenback. That may indicate greater struggle for the metal than anything else as oil is leaning hard on a trendline resistance that dates back to the 2008 swing high. There is no doubt a lot of attention on this incredible reversal from a -40 inversion last April to 60 now. Then there is Bitcoin which has easily cleared $50,000 as the new generation increasingly claims the world’s most liquid fiat is being supplanted. 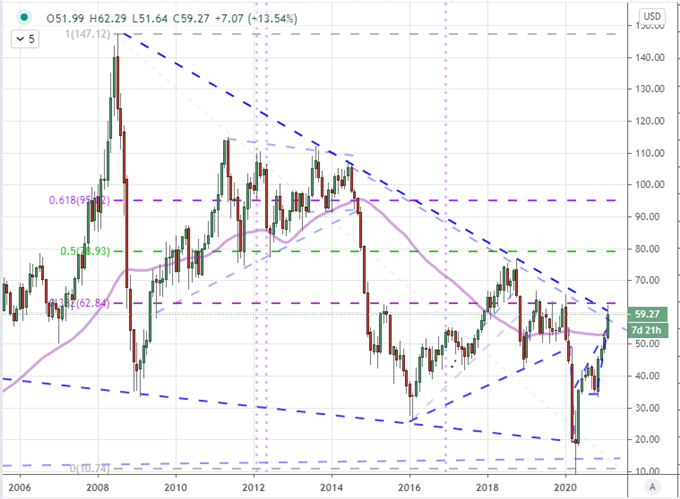 In general, I don’t believe ‘regular’ event risk carries much capacity to move the markets. However, the data is nevertheless important and traders should always be mindful for the possibility that traditional fundamentals suddenly take back the yoke from the complacent speculative masses. That said, the developed world, February PMIs are on my radar. Measures for the US, UK, Eurozone, Japan and Australia are on tap. That represents a good overview of global growth pacing for the current month – a timely GDP proxy. If the data is in-line to favorable, it is likely to be absorbed as reinforcing a pre-existing view. If it disappoints broadly, that is where I would expect the strongest market response. 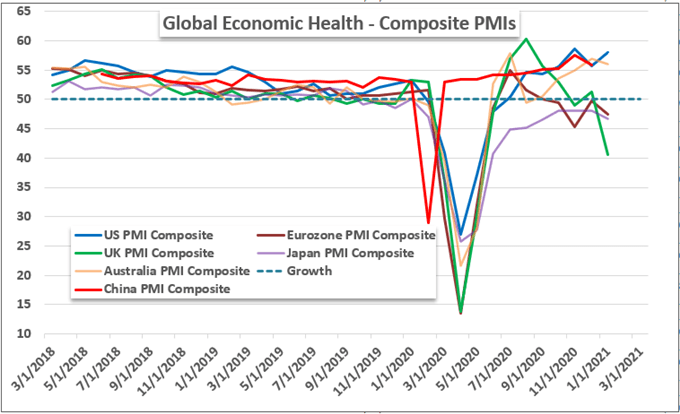