Hope across the Reddit boards for a second wave in the heavily shorted stocks that were the focal point for the retail versus hedge fund fight of the past two weeks seems to have deflated significantly. Yet, a tamed potential for this particular subsegment of speculative appetite doesn’t mean that sentiment writ large is relegated to inertia. While GameStop and AMC extended their symbolic retreat with temperance in their respective turnovers, there was nevertheless fresh record highs registered for the S&P 500. I feel it is important to note that it is not impossible for the market to muster a second, more intensive swell for this unusual group of stocks. However, the deflated crowed that has held its long interest through the painful retreat is very unlikely to be the genesis of another liftoff. The social meme-directed group is unlikely to scrounge the necessary capital necessary to match the volume registered through the second half of January. Perhaps irony could find a rotation into hedge fund interest or the like, but this is less likely to be the spotlight for risk appetite through the final trading day of this week and beyond. 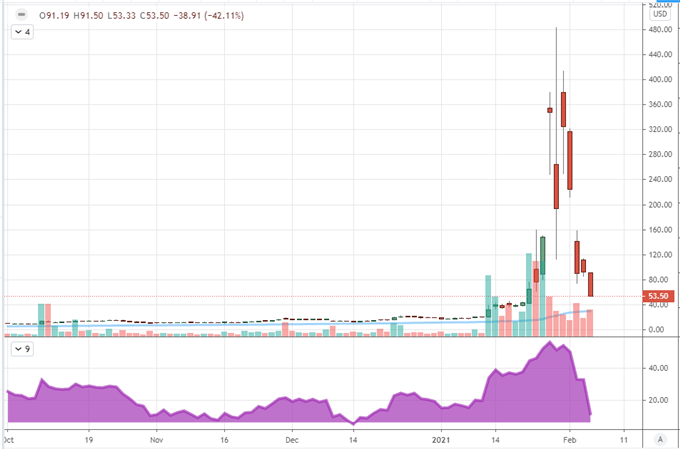 In contrast to the very select tickers that we’ve seen command so much attention in mainstream financial media, we have actually seen some of the stalwarts return to the symbolic helm through Thursday’s session. The broad S&P 500 advanced 1.1 percent to close at a record high while the tech-leaning Nasdaq 100 registered a similar peak following a 1.2 percent climb. Yet, where the official mark may look good on a headline, neither index really looked as if it had truly cleared the congestion high. Perhaps a nod to the whiplash in the retail speculative space, there was a more convincing clearance to be recorded by the small cap Russell 2000. The index led with a 2 percent punch higher that would more definitively notch new peaks. Then again, leaders are not always indicative of the masses. A look to global equities this past session received far more tepid appeal. Emerging market and high yield fixed income measures further painted a struggling sentiment. Certain carry trade and crude oil (with a growth and speculative feature) were the exceptions, but that doesn’t necessarily speak to a broader sentiment potential. 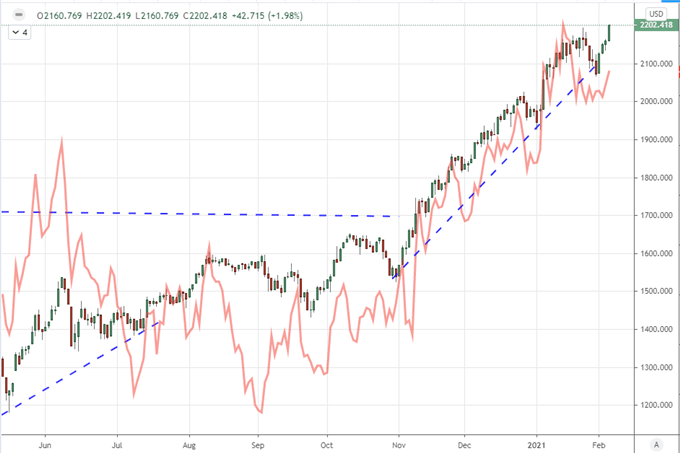 One impressive development against the backdrop of a moderate ‘risk on’ lean was the charge for the often-maligned top safe haven of the global macro market: the US Dollar. The trade-weighted Dollar Index (DXY) finally cleared 91.50 which represents the midpoint of the 2014-to-present range as well as the 38.2 percent Fib of the 2008-to-pressent range. These are some noteworthy technical, but their fall alone is unlikely to usher break into self-sustained trend. If there is not a deep seated conviction in the reach for the Greenback, consider what hesitation would mean for EURUSD which is now attempting to wade through the middle of its past six month range which happens to coincide with the 100-day moving average. 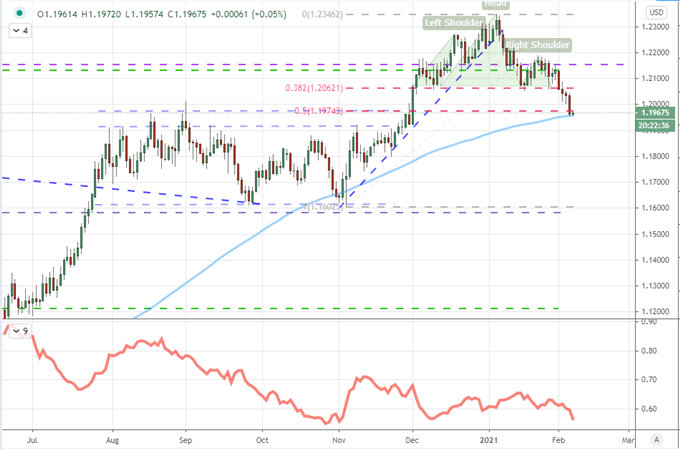 If the Dollar does in fact persist on the other hand, the world’s most liquid cross would be a prime candidate for the ‘follow through’ moniker. Overtaking a secondary level of high profile resistance would carry with it its own speculative appeal, but that perhaps isn’t as impressive as what we are seeing from USDJPY. While there aren’t the same level of subsequent chart-based steps to scale, the 7 consecutive day stretch – a second wind after a notable slowing of pace through Wednesday and the longest advance since October 2016 – enjoys more statistical fame while the subsequent range to scale is far more impressive. 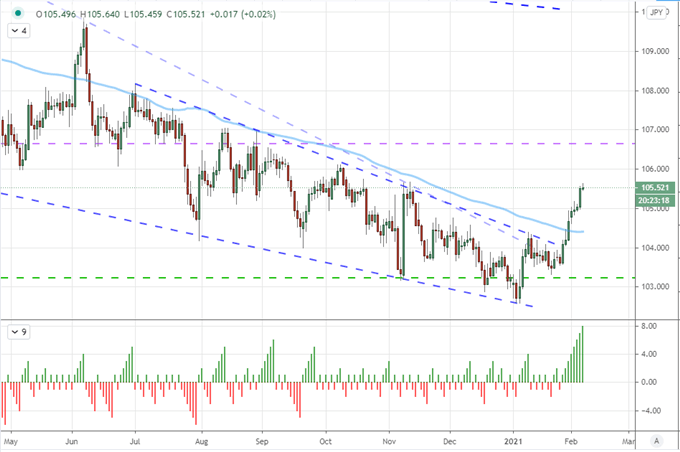 If we are looking for the motivation to further the consecutive candle tally or overtake notable technical boundaries, the market could potentially find its motivations in the most recognizable data point across the global financial markets: US nonfarm payrolls are expected to have grown by 50,000 while the unemployment rate is seen holding 6.7 percent. That leaves notable room for better-than-expected data, but a downgrade in pull for the favorite economy signposts may struggle to capitalize. That said, if the data were to disappoint, it would likely carry great market sway to pull speculative measures lower than vice versa.

US Change in Nonfarm Payrolls Overlaid with Unemployment Rate (Monthly)

When looking for Dollar pairs that stand technically to rouse a greater response amid provocative event risk, I would look to those pairs with additional fundamental charge and technical potential still building pressure. Against that criteria, Cable (GBPUSD) would be interesting. If it weren’t for an unexpected Sterling rally, this pair would have held its break below 1.3600/35. A steady slide through the morning Thursday didn’t supercharge sentiment but it did suggest a move of conviction. Yet the Bank of England’s (BOE) policy statement that negative rates would be avoided (at least over the next six months) was a point of relief that charged the Sterling. I feel GBPUSD is a true reflection of what the about face would register in moderated follow through, but EURGBP and GBPJPY seem to carry the exaggerated expectations on their respective trends. 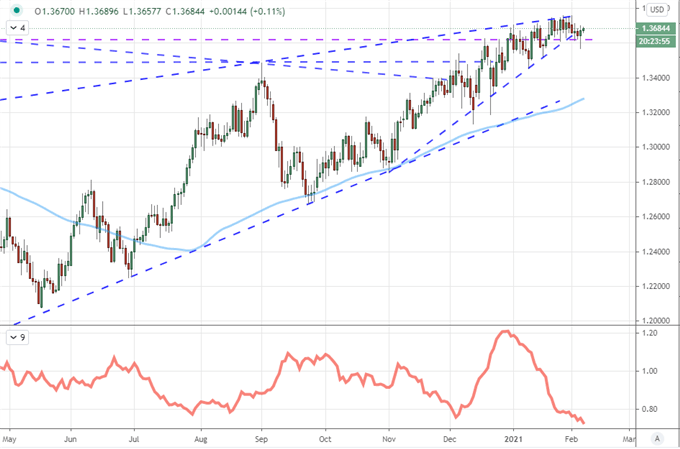 However, if we want to add up the full potential of scheduled event risk impact, my attention would be drawn to USDCAD. From a chart basis, the multi-month trendline resistance to the topside (above 1.2850) and the congestion floor (near 1.2750) offers a limited range to clear. Add to that the cumulative charge for the US and Canadian employment reports – released at the same time mind you – and there is notable breakout potential. That said, two noteworthy data runs don’t have to align to the same general direction for the underlying market. They could also offset each other in market movement terms or simply fall squarely in line with expectations for an undetonated technical pattern. 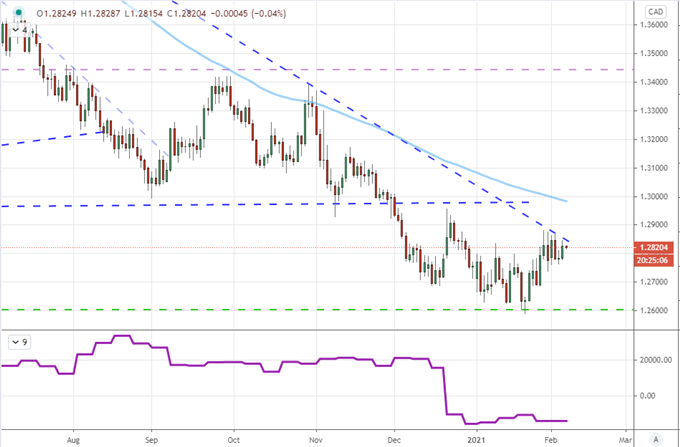