Risk Benchmarks on Pace for Extraordinary Week of Quiet

We are heading into the final session of the trading week with the market carving out an extraordinarily reserved range. Is there enough fundamental impetus between this past session’s key developments and the final thrust of data Friday to at least urge a ‘relief’ break – if not a spark for a bigger move to pursue into the following week? If you have been keeping track of the market’s fundamental interests and the top event risk, you’d likely have marked the commentary from Fed Chairman Powell his past session on stimulus plans and the details of President-Election Joe Biden’s stimulus program. If so, you’d likely also be aware that benchmarks like the S&P 500 were not roused from the exceptionally tight trading course. The rolling five-day average daily range for the benchmark is the most reserved since mid-August and then pre-pandemic levels of activity back in February. On a weekly basis, if we don’t broaden the trading span, we will end with the narrowest week since December 2019 – and, in case this escaped notice, while it hovers at record highs. 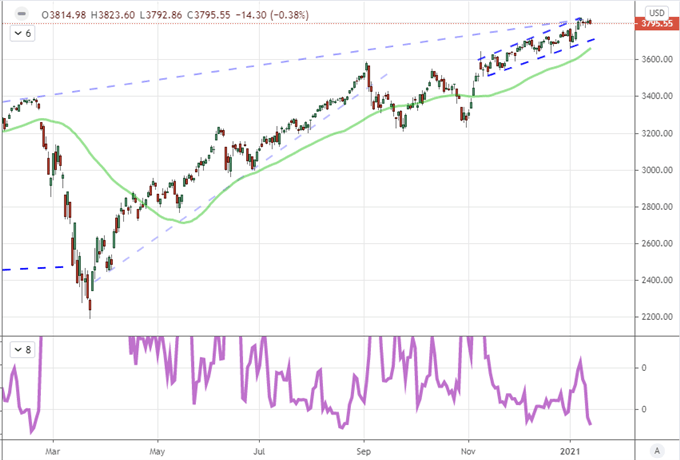 Given the quiet that we have seen throughout the week, perhaps the extension through Thursday was not as surprising as it would have been otherwise. However, the restraint nevertheless struck me the key event risk of the past session. While the unexpected swell in initial jobless claims from 784,000 to 965,000 paints a troubling picture, the more thematic update could have been Fed Chairman Jerome Powell’s remarks. Following a week chock full of US central bank members’ remarks, the group’s head seemed to carry forward a message of assurance to a market anxious over an eventuality for withdrawing the massive support that has been integrated into the system. Powell made very clear that when they are ready to reduce their pace of asset purchases (‘taper’) they would communicate clearly and well in advance. He would also say that they were not close to this point as the economy was far from its goals. In a linear world, the remarks could have pushed the S&P 500 to break its range with a bullish run to fresh record highs, but that clearly was not the case. 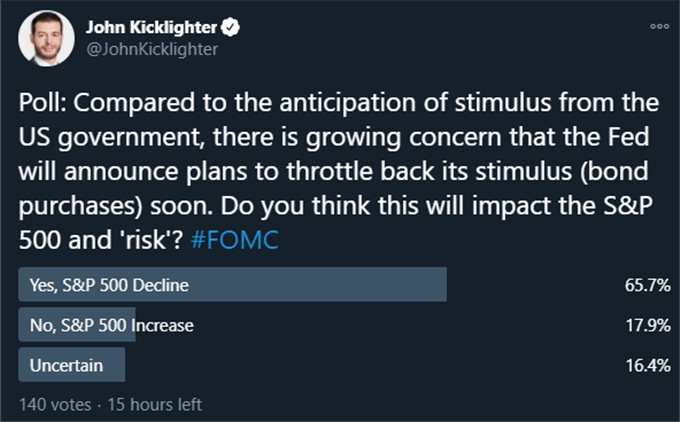 Perhaps the biggest disconnect between the Fed Chair’s message of comfort and the lack of market movement is the speculative nature underlying the financial system. Markets are collectively forward-looking, delving into the probabilities of different possible outcomes – in contrast to simply pricing out everything that is currently known. We know from the FOMC’s forecasts in its December SEP that it expects to keep rates on hold through 2022 at least. However, circumstance may change those plans; and there remains significant probability that they start reversing course before that time – like the swell in inflation expectations. Further, the rate hikes so often referenced in policy remarks would be the last step of a course reversal. First would be a slowing of the monthly asset purchases which would lead many to discount the subsequent steps even if they are spread out over 12, 18 or 24 months. As such, I will keep the EEM emerging market ETF in my ‘risk’ rotation evaluation as this particular measure/market proved very responsive to the first taper tantrum back in May 2013. 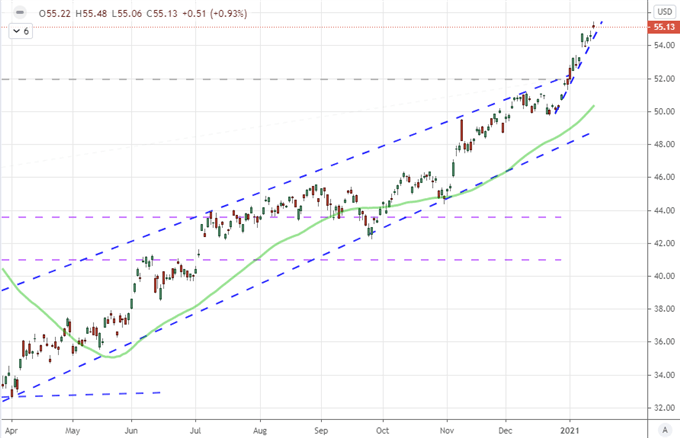 It is important to emphasize how important stimulus is to the current standing of the markets. Not only are the programs by the Fed and other central banks crucial to the course of economic activity as it stands, but the sense of safety it has inspired in financial market activity has in turn urged speculative activity. It is not a stretch to suggest that the asset appreciation we have seen over the years that has well-outpaced the clip of growth and price growth in goods/services are fundamentally propped by this explicit insurance. If confidence in this vow to act as steward of the capital markets (globally, not just the US) were to falter, I would expect a deep retracement in years of exuberance. 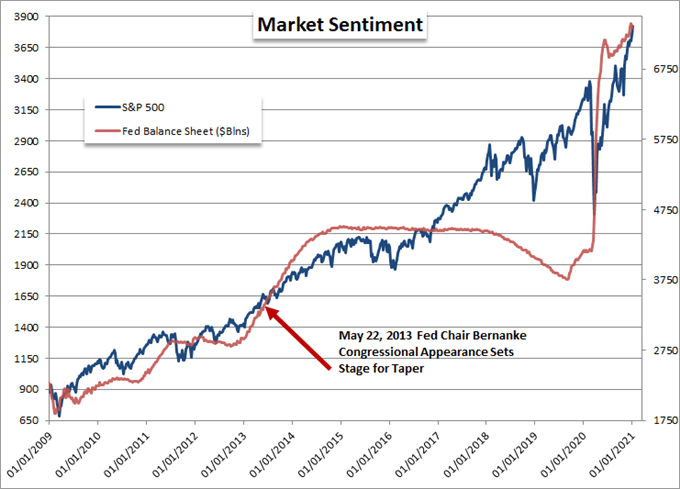 Friday Trade and the Possibility of Volatility

One of the more practical restrictions on markets in response to the Fed commentary besides a line of skepticism was the anticipation for the stimulus program due from President-Elect Joe Biden after the close. The incoming leader leaked the details of his plan before his scheduled speech – returning us to a norm of media embargos and press conferences versus surprise tweets – and the effort looked to quite large. With a program estimated at $1.9 trillion, the administration seems to be looking to inspire confidence. Split into two phases, the ‘American Rescue Plan’ aimed to direct $416 billion to launch a nationwide vaccination effort to vaccinate 100 million people in the first 100 days in office. Further, the plan would look to fund additional $1,400 in direct payments (in addition to $600 already approved) to Americans, an extra $400 in unemployment benefits, provide loans to small businesses, $350 billion to state and local aid, extending eviction/foreclosure moratoriums and more. 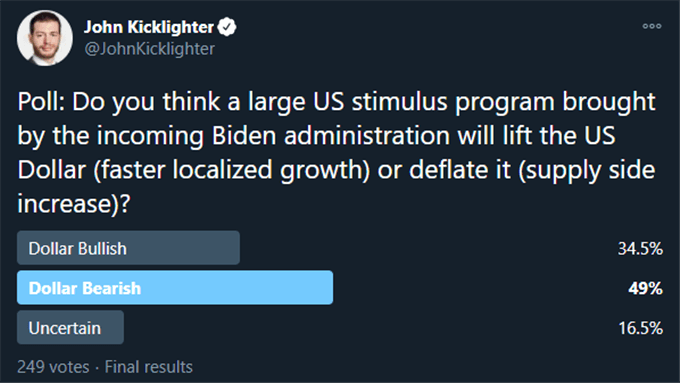 There is little doubt that the scale of the program in the US is large, but it will still face hurdles to find write off in Congress – where a simple majority with tie break in the Senate will not meet the 60 votes necessary. These details may linger in trader’s minds, but it is still remarkable that the markets did not climb after the news. In fact, after hours S&P 500 futures trading saw the benchmark slide – though not far enough to break. There has always been a risk that anything short of a massive stimulus plan that far outstripped expectations could find the market ‘disappointed’. It isn’t the that the effort doesn’t afford significant support to the economy, but rather the markets have priced in more enthusiasm that perhaps what the economic implications could be from the projected infusion. In simple terms, it could be a ‘buy the rumor, sell the news’ scenario. That isn’t guaranteed for Friday, but market participants should keep it in the back of their minds alongside the interpretation for the likes of the Dollar. I believe there is a chance that an economic upgrade through fiscal stimulus could lift the Greenback rather than deflate it like monetary policy has urged in past years (just look at the Euro’s lift this past summer when the EU announced its large support package). Alternatively, if risk aversion follows instead, the Dollar could also catch the wind from its underutilized safe haven status. Keep tabs on EURUSD closely as the pair is lingering in a very prominent head-and-shoulders pattern. 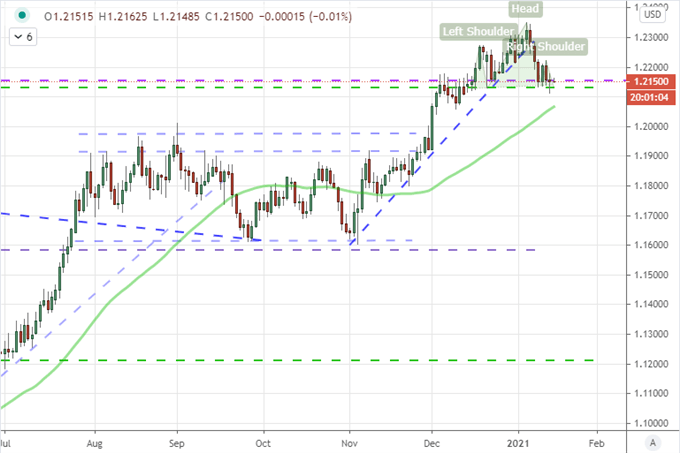 While the Dollar’s bearings are a top concern for me through the close of this trading week given the technical bearings and the fundamental impetus, there are other options in volatility for the discerning macro trader. Another standout is the British Pound which faces a host of fundamental event risk including GDP (actual for November and estimate for December), trade balance and industrial production. With the recent shutdown and EU trade relationship transition, there is a lot of context to work out for possible volatility. 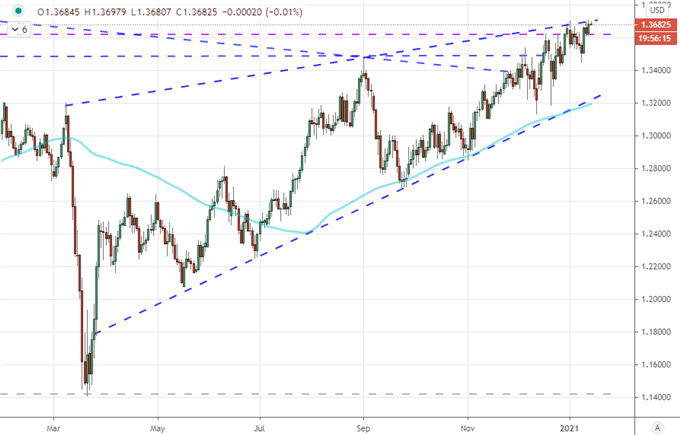