Dollar Rebound Is a Tall Task ahead of NFPs, Dow and Bitcoin Keep Running

Fundamental Fear Ebbs and Caution Thrown Back Into the Wind

The second guessing of the passive ‘risk on’ trend proved to be but a flash relative to the long-term complacent swell. Fear of spreading political instability in the United States deflated this past trading session, allowing the benchmarks that showed even a hint of concern over fundamentals to quickly restore their speculative charge. With the electoral college ballot count complete following the shocking infiltration of the US capital building in Washington DC Wednesday and the Georgia senate seats certified to the Democratic candidates, the country and markets shifted focus to the other unresolved issues like the health of economic activity and the spread of the coronavirus. With a favorable risk turn, the Dow Jones Industrial Average, which was alone in posting a record high the previous day, moved to extend it climb through this past session. 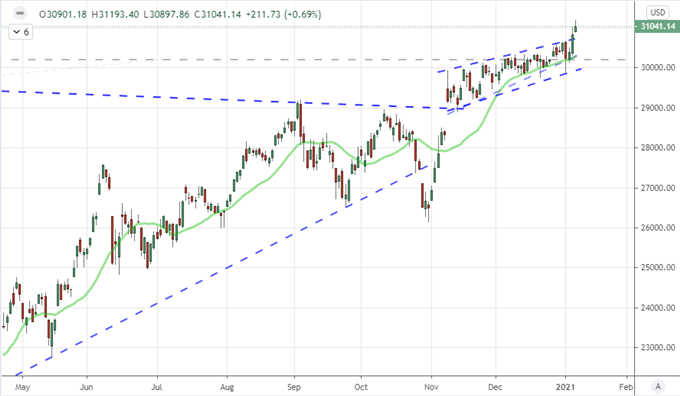 More impressive as a milestone of speculative conviction was the quick reversal from the other milestone US indices Thursday. The broader S&P 500 and tech-skewed Nasdaq 100 compensated for their Wednesday afternoon slip with a gap higher on Thursday’s open and subsequent follow through to push both back to their own records. Looking more closely at the edge of speculative appetite, the rebalance of the past session undercut the relative gains of the ‘blue-chip’ US index compared to the more speculative-leaning benchmark which has set steadfastly set the pace for years. Other measures that signaled the extremes of risk appetite would be preserved for the time being were a rebound in crude oil, emerging assets and Tesla. The favorite stock of 2020 among new investors extended a fresh record high price above $800 which translated into a market capitalization above $770 billion that lifted its value above that of Facebook and moved founder Elon Musk into the position of being the richest man in the world. 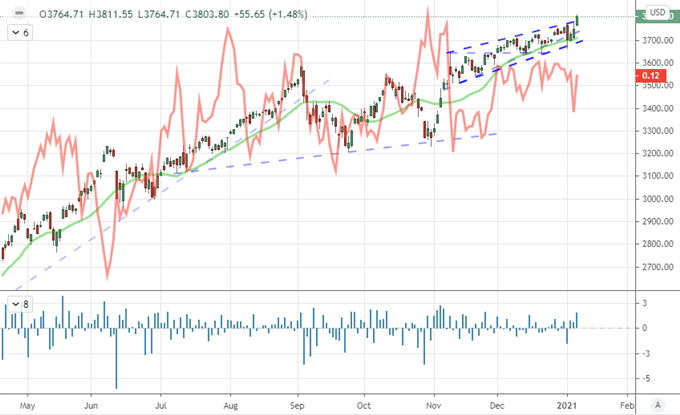 Other Benchmarks On the Risk Spectrum

While the uncertainty surrounding the US political situation briefly undercut US indices and spread to a host of other assets that tend to reflect sentient, a few speculative favorites didn’t even seem to waver. Bitcoin was one such market. The most recognizable cryptocurrency extended its epic swell to briefly edge over $40,000 intraday Thursday. It is important to recall that just weeks ago, this novel asset was breaking to a record high by overtaking $20,000. In practical terms, BTCUSD has doubled in less than four weeks and is up approximately 35 percent year to day….which is only a 7 day time frame. While there is some fundamental interest being cast to this alternative-to-fiat in the slide from the Dollar and other major currencies owing to political upheaval, excess stimulus and economic uncertainty brought on by the coronavirus; there is unmistakable hallmark of a bubble here. That doesn’t mean that it has to pop just because we recognize it, but its advance will eventually be so precarious as to collapse. 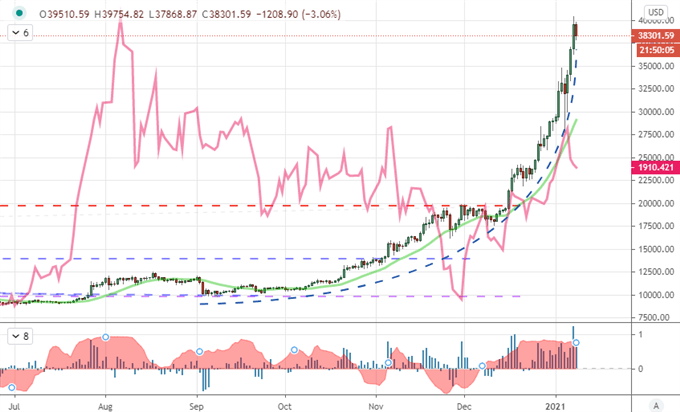 Another risk asset group that is more conventional but nevertheless remarkable for its performance this past session was the FX-based carry trade. Many of the Yen-based crosses were sporting measured gains, but a few of the more liquid pairings were showing meaningful technical progress to suggest a possible broad shift from long-term congestion. Notably, EURJPY, GPBJPY and CADJPY all broke their respective upper bounds the past session. However, I felt the most remarkable performance went to USDJPY. Here, the most liquid of the Yen crosses didn’t its 9 month descending trend channel, but the day’s rally was perhaps more aggressive. That is owing to the specific relief spurred for US assets. It seems retail FX traders (as measured by IG clients) were paying attention to the full range move, and that the technical bounds would ultimately hold. Net positioning on the IGCS showed a quick shift to neutral after a heavy net long exposure which seems to suit the markets persistent struggle to develop earnest trends for most assets. 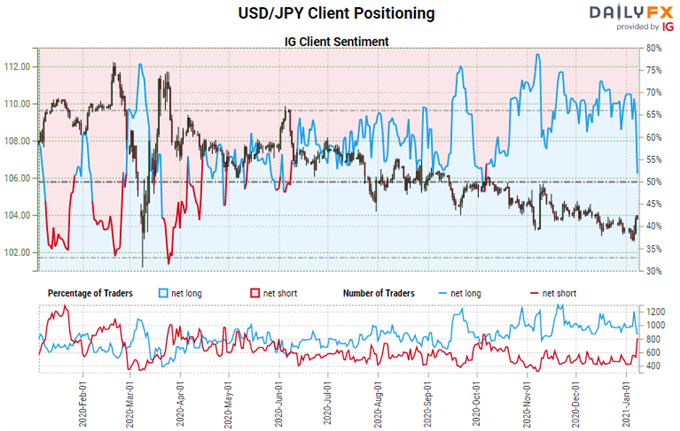 What Will Pick Up the Baton Now?

With the nascent risk aversion shift from the first day of trade from the year and subsequent Washington DC scare relentlessly returning to its bullish course, the question once again shifts to: what will take up the responsibility for setting sentiment? I do not think that it would be wise to fully write off US political risk at this stage. While the special election for the Georgia senate seats seems to be behind us and Trump conceding to Joe Biden’s victory at the polls (not to mention social media outlets locking the outgoing President’s accounts), there is plenty of probability for the animosity stoked in the country over the past year to flare up into another credit risk for foreign investors to rethink their exposure to the United States. The Dollar has put in for a mere relief rally off its lowest levels since April 2018. That has translated into a break for the likes of EURUSD, but a break is not the same thing as a genuine trend. 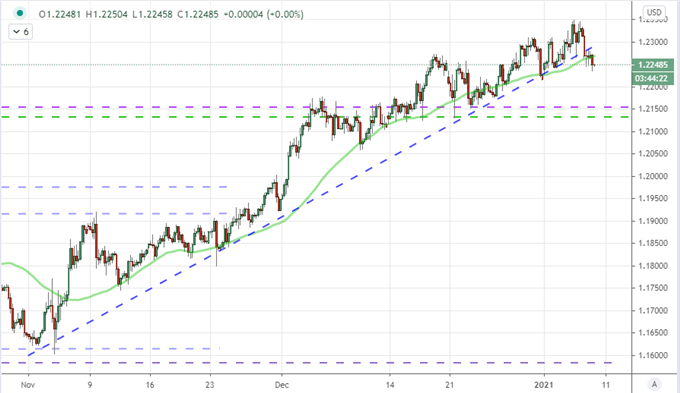 If we continue to see American politics fade from the radar, there is plenty of fundamental fodder to fill in the void. Globally, the continued rise in Covid-19 cases along with the national/regional lockdowns that it is urging will cater to a relative risk assessment between regions and their markets. Yet, adding a level of complication, the rate of vaccination is a relative offsetting feature that data is starting to slowly fill in for the chart minded. If the interest is for black-and-white data, Friday brings the December nonfarm payrolls (NFPs). This report has lost a lot of its impact in the past months as the fallout from the pandemic shutdown forced job losses leaves us still desensitized. That said, markets are still open to surprise off this series and its implications to government inaction on stimulus and economic recovery. A reminder: the ADP private payrolls for the same period reported a net loss of -123,000 jobs. That may very well set expectations that an upside ‘beat’ offers up the greater market impact than a miss – particularly for the Dollar. 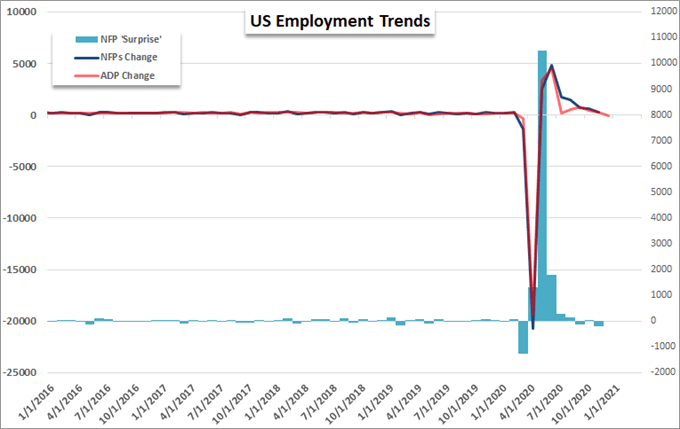