Risk Trends Waver but Have Yet to Truly Turn

There was little mistaking the fundamental waves hitting the global markets this past session. Though there were notable events on the economic docket like a -123,000 person net drop in US private payrolls from NFPs and systemic matters still unfolding such as the rising number of coronavirus cases globally – along with the lockdown efforts to stem the tide – the real focus was on US politics. The special runoff election for the two Georgia senate seats was the event I thought would carry the most market weight while the count of the electoral college ballots seemed a mere formality. That wouldn’t prove the case however. Ultimately, the was an undercurrent of ‘risk on’ that would shade the trading session, but not the sort that would inspire the revitalization of a genuine trend. The Dow Jones Industrial Average ultimately proved the best performing of the major US indices and the only one to post a fresh record high. 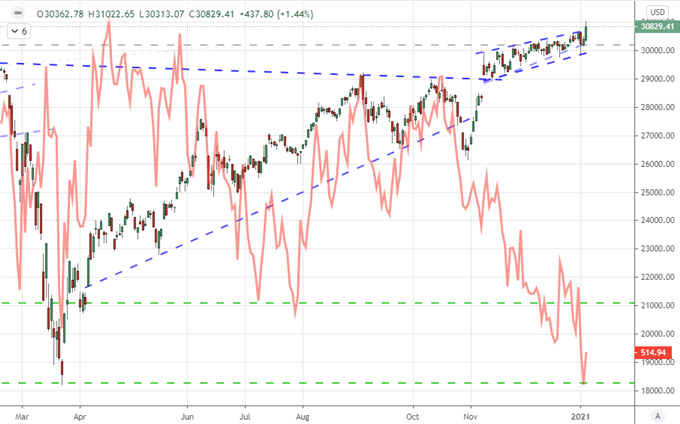 It is remarkable that the ‘blue chip’ index managed to maintain its advance considering both the broader S&P 500 and speculative favorite Nasdaq 100 both faltered into the second half of the trading day. This relative hold for the narrow index may be related to its closer tie to economic activity rather than speculative appetite – which those in equities term ‘value’ versus ‘growth’. This internal rotation of speculative effort can speak volumes to intent in the market will, similar to comparisons of Tesla, FAANG members and IPOs against utilities or conglomerates. Another noteworthy comparison was the downshift that is worth noting outside the strict borders of US stocks was the comparison of the Dow vs VEU – the rest of world equity ETF. Having deflated for months, finally a jump. This is not really a reversal for the index in my view as much as it is a sign that concern of speculative appetite can spread to the rest of the world. 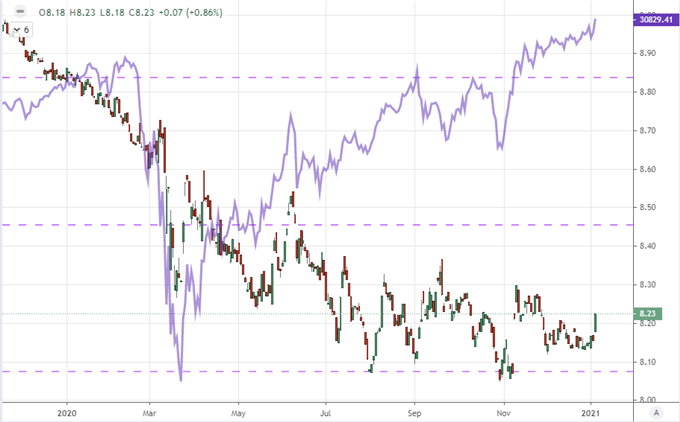 Between the two political events that were taking place in the United States this past session, I believed the special election in Georgia would carry the most potential for a genuine market impact. In general, my experience is that politics in stable democracies have limited impact on price action. However, the possibility that the runoff could flip two senate seats and deliver a Democratic control over both house of Congress and the White House could be read as an unfriendly environment to businesses and investors ahead. Ultimately, Raphael Warnock and Jon Ossoff would win out over the Republican incumbents and shift the balance of power substantially. Yet, the typical market view that this would usher in an a tough road ahead didn’t seem to develop – or at least it wouldn’t break speculative complacency. Perhaps this is registering as a positive as policy such as the long delayed stimulus could be unlocked, but I don’t read this as a ‘risk on’ charge either. This seems more like a market awaiting a more prominent signal. 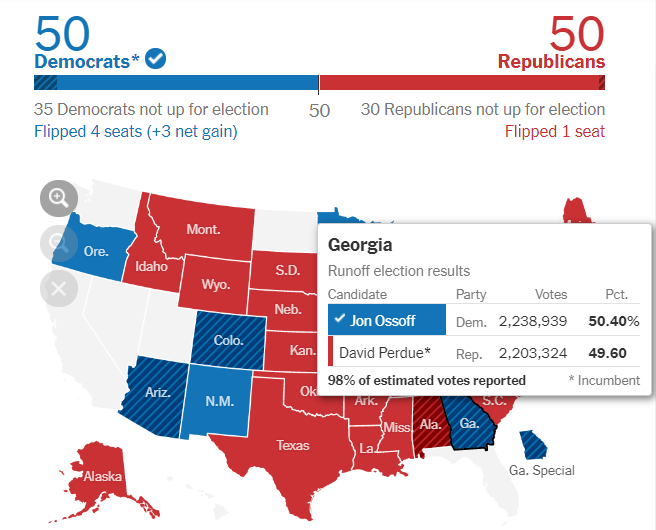 Graph from the New York Times

Alternatively, my expectations for the electoral ballot count in Washington DC was for a drawn out but otherwise symbolic process that would be the fodder of political junkies rather than US – much less global – traders. That didn’t prove the case however as reports of protestors converging on the Capitol building where the vote was being held turned alarming. Eventually, a mob broke into the usually secure federal building, leading to senators and staff seeking shelter, the use of tear gas and ultimately one person being shot and killed. The news drew strong rebuke from officials around the country and the world, but the criticism also started to rise for President Trump’s slow and shaky response to the chaotic event. In market terms, this can be a troubling cue to more than just major American corporations which issued statements and ratings agencies, it can open a crack in the conviction of confidence for foreign investors in the US markets despite the seemingly unwavering climb in benchmark assets. That can sent more capital to alternative havens – outside even the FX liquidity – and Bitcoin seemed a clear benefactor. Already charging higher with a speculative buoyancy behind it, the chance to offer sanctuary to a typically pompous Dollar seemed particularly ironic. 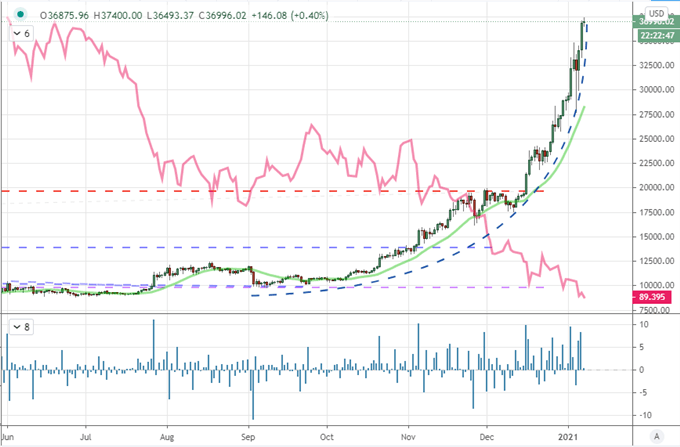 What’s Ahead for the Dollar and Broader Financial Markets

Another reflection of concern over the stability of the US capital markets amid civil upheaval is the obvious pressure in the Dollar. The Greenback has already been in a progressive slide for a myriad of troubles including the struggle to raise stimulus to offset the revival of the pandemic’s influences, but the addition of this event which could be put into cold accounting terms as a ‘credit risk’ only furthered its pressure. A fresh low for the DXY Dollar Index back to April 2018 levels resulted in the mirror situation for EURUSD as it climbed further above 1.2300. If the political rhetoric continues to deteriorate and the White House sow discord, it is likely that global fund managers reduce their risk by reducing exposure. That could further batter the Greenback alongside risk trends. Of course, if risk aversion kicks in in earnest – such as seeing a true tumble out of US indices – the Dollar is still likely to step back in as a top liquidity option unless there is a discreet crisis surrounding the country. 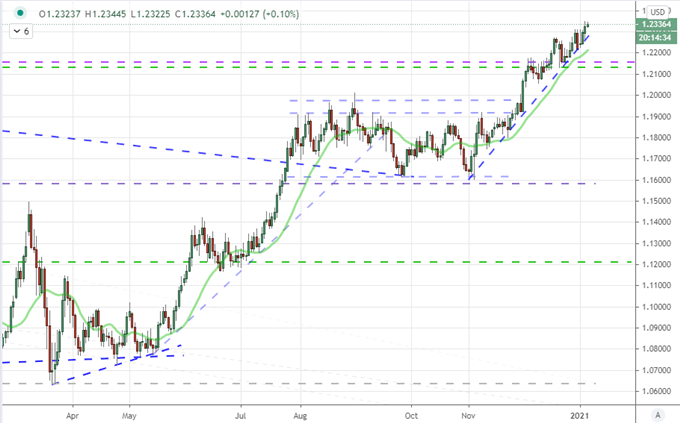 Looking ahead to Thursday and Friday, it seems a much greater risk that US politics carries over as a possible market catalyst than what I had expected previously. That said, the complacency is still remarkably resilient and traders should account for what the mood its – not what we think it should be. If the developments in Washington ease back, I will keep a closer watch on coronavirus headlines and GDP-related data. In the latter’s case, there is the ISM service sector report for December which is the closest thing to a December GDP reading we get for the United States. That will be followed by NFPs on Friday. But it isn’t just as US focus as there are other global figures on tap as well including the Eurozone sentiment figures which can help give more shape to the updated World Bank and IMF economic forecasts this week. Through it all, traders should keep close tabs of the winds of risk and plot their hedges and/or escape plan ahead of time. Just in case. 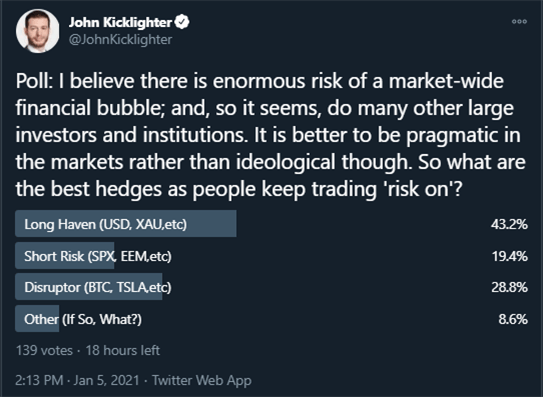