A Slide to Start the New Year

Happy New Year! The past few weeks were defined by the restraint expected around the holiday season which contrasted the anxiety born out of record highs for indices paired with numerous unresolved fundamental issues. Much of what we had seen in the last weeks of 2020 offering lift to the likes of the S&P 500 were what I would consider fodder for ‘relief rally’ – that is feeding enthusiasm by lifting some of the pressure from the menacing threats lurking just over the horizon. Overdue Covid vaccination approvals, last minute stimulus breakthrough in the US and a path forward for EU-UK trade all offered enough confidence to stretch just a little further through a period known for its default bullish coast. Yet, none of it would set the foundation for a new platform for an extended climb.

That disconnect may serve as the basis for skulking bears dubious of the advance to read into the technical break lower from the S&P 500 and US indices in the first trading day of the year. The drop from the index was significant in technical terms. Not only was the approximately -1.5 percent drop unusually volatile for an opening session of a new year, it was generally the biggest drop since October 28th – when the index gapped to set its last swing low. What’s more, the drop has cleared a rising wedge that few chart watchers would have missed. Yet, liquidity is still a defining feature for market potential and we are only slowly getting up to speed. While I believe an earnest bear trend would have more legs (move further and faster) than a bull trend from the current standing, it doesn’t mean such a move is inevitable. 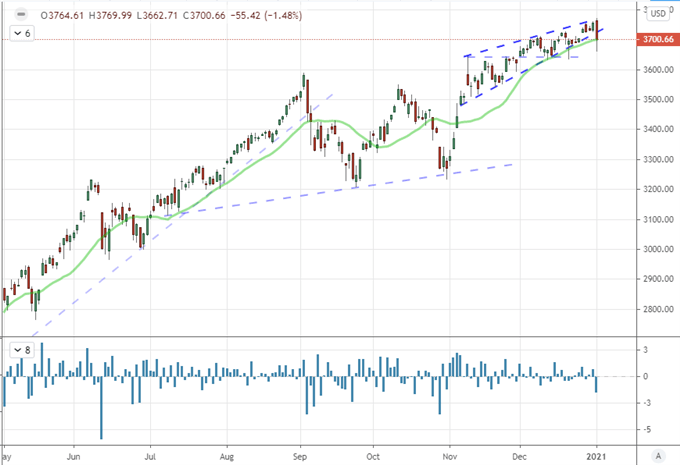 Though many believe themselves in command of a preternatural sense of timing markets, picking tops and bottoms is a fraught business. Attempting to call the tipping point for this ‘most hated of rallies’ has already left many market participants tending to the wounds of their trading accounts. I am not so bold as to assume I can read the turn of the tide, but there are still areas to watch that can serve as early warning that prevailing trends are at least coming under duress. I have highlighted the concentration of speculative appetite from the broad SPX to tech-leaning Nasdaq 100 to the specific FAANG group to the craze for Tesla that evolved through 2020. Bitcoin was in this mix particularly in the second half of the year, but it seems to have pulled even further forward as a symbol of speculative appetite. In just weeks, a break to record highs above 20,000 led to a rush that overtook 34,000. The makeup of this move was further amplified by Monday’s intraday collapse that was reportedly exacerbated by the forced unwind of derivative positions. This is like a self-contained example of the speculative market cycle. 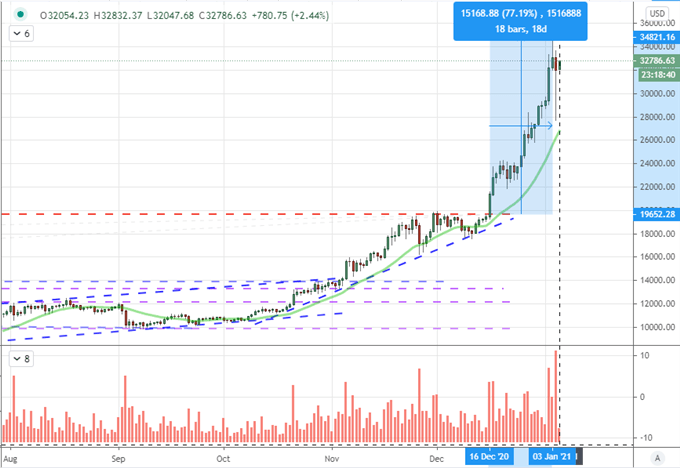 Always on the watch for the systemic catalysts, there are a few highlights that are in the near future that I will keep very close tabs on. From the economic docket, the economic activity reflected in PMIs may seem the most obvious fundamental cue; but I believe the banality of faltering growth will still struggle to ignite markets’ fears. That said, if there is any area where such data may present a clearer read, it would be the Dollar where Markit’s final manufacturing reading for December hit a six-year high. What’s more, the ISM’s manufacturing survey is due today and its service sector report comes Thursday while December NFPs will further prod our notions of the largest economy and the beleaguered Greenback.

Yet, if there were one matter I would put above the rest for the DXY and US markets, it would be the Georgia senate election runoff. State rules require a winning candidate to secure 50 percent of the vote which no one obtained. Should the Democratic contenders unseat the Republican incumbents, it would effectively give Democrats control of Senate – as it would split the chamber with independents more likely siding with Democrats for a 50-50 split which would give Vice President-Elect Kamala Harris the deciding vote. Should this occur, the Democratic party would hold practical control of the executive branch and both branches of Congress making it far easier to push meaningful policy changes. While both parties have policies that policies that can help or hinder markets, traditionally it is assumed that the GOP pursues measures that help investors. That baseline assumption exert pressure even before the details are truly hashed out. 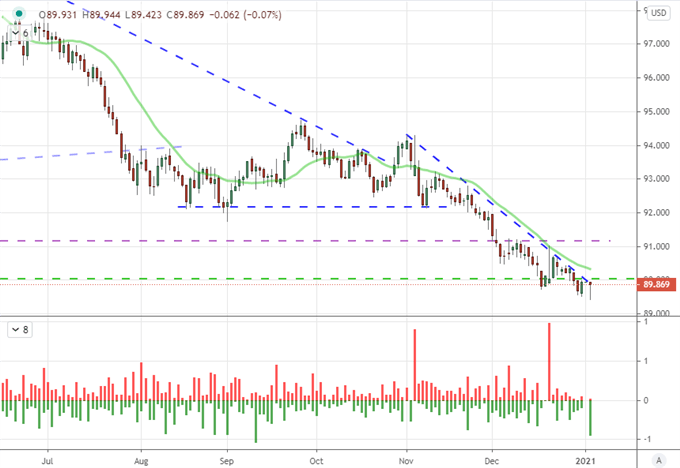 Another theme of substance that should be monitored closely is the state of the coronavirus pandemic. December brought the much-needed enthusiasm that multiple vaccinations were finally garnering approval and a number of countries had begun the process of distribution to their respective populations. However, while this effort is ongoing, we have seen the number of cases and deaths continue to rise. Disturbing records are pushing countries to reinstitute various levels of lockdown. While this may be the right thing to do for the safety of the population, it will nevertheless burden the economy and the livelihood of citizens in the countries taking these dramatic steps. In this effort, gaps in growth forecasting will broaden and relative performance will diverge in assets. 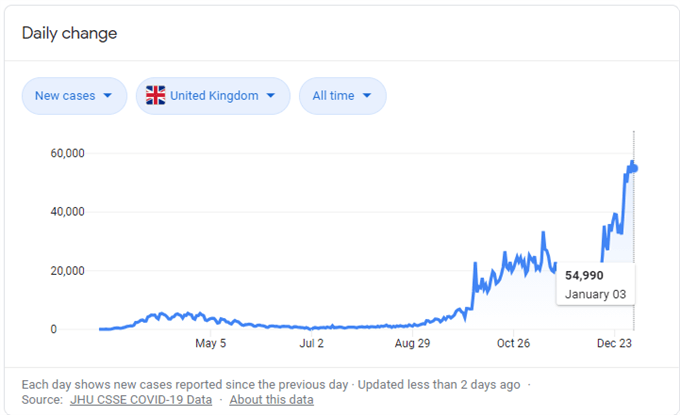 Chart Created by Google with Data from JHU CSSE

The economic impact of the pandemic response is already showing through on the British Pound. Despite the UK and EU governments ability to disarm the threat of a ‘no deal’ trade relationship on January 1st after three-and-a-half-years of contentious negotiations, GBPUSD was unable to leverage a technical break beyond 1.3600 into a purposeful trend – consider also that the Dollar has been beset with issues of its own as well. Brexit is one important factor that has played a crucial role in Sterling direction for years, but its bearings have been thoroughly plumbed such that a lackluster deal was likely part of the outlook. A second nationwide shutdown which Prime Minister Boris Johnson announced Monday evening in London through mid-February was not part of the equation until recently. 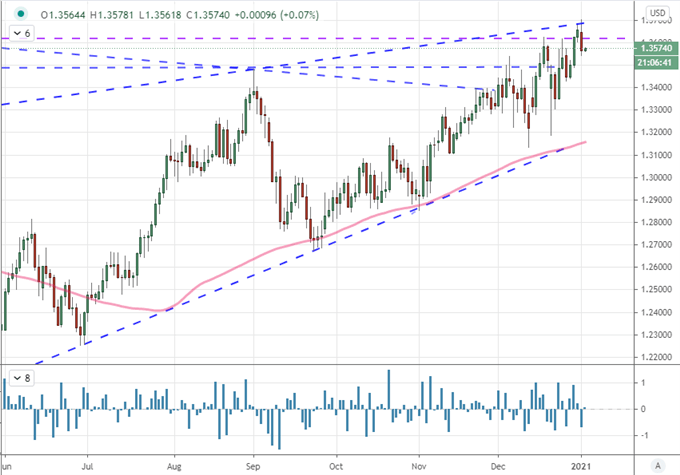