As we close out one year and ready for the opening of the next, we carry remarkable fundamental and technical baggage for some of the largest speculative benchmarks. Will the preternatural climb of risk-leaning assets continue through the start of 2021? How will themes like Brexit, Pandemic measures and trade influence the assets at the center of the related speculation for months and years from the jump this January? I take a look at some of the key analytical considerations for benchmarks at the top of my watch list as we enter the New Year.

In my video discussing the top fundamental and systemic themes that we are due to face heading into 2021, I believe risk trends remain not just an omnipresent influence but also one on the verge of seismic upheaval. There is no truer weather vane of market sentiment for me than the S&P 500 – hence the frequency of its appearance in my market updates. This is not to say that it is the most sensitive measure to every waver in speculative views, but rather it is an outperformer through the ‘risk on’ side whose commitment seems a definitive marker as to what bearing markets at large are going to commit.

With that said, SPX is a perfect dichotomy of pressure between record highs and a month and a half of congestion. A break from the tight 3,725 - 3,640 range during the thinned liquidity we are facing ahead is probable, but I would be highly dubious of intended follow through from such an effort after we cross the threshold back into full liquidity in 2021. The prevailing bearing remains the bullish bearing that has more or less defined the past 11 years, but advance is likely to prove more demanding to generate pace while the technically lower probability shift to bear trend is more likely to fuel momentum. 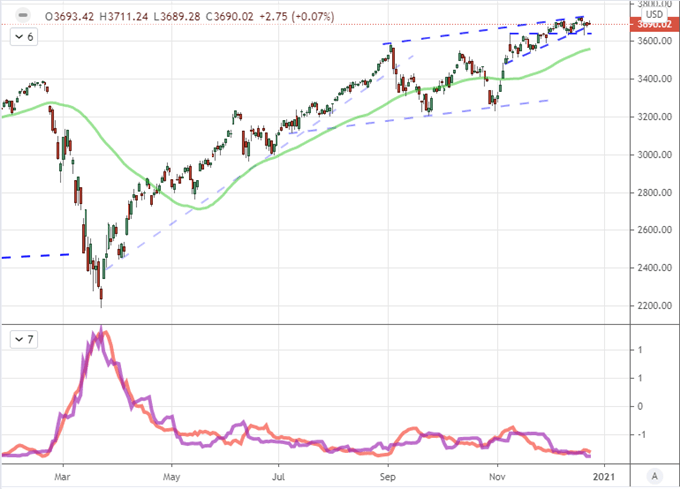 For some further supplement to my attention in the S&P 500, I will put serious weigh into the context of its conditional performance metrics. In addition to its general course, the market depth and volatility of the index will carry far into the financial system. In 2020, the market aligned fairly closely to its historical averages for performance – particularly April and November. If this average is to carry over into January, the assumption will be for another month of lift with restrained activity and turnover. Yet, averages have highs and lows that naturally deviate. Given the 9-month recovery we’ve put in since the pandemic low represents the strongest charge over that period in 11 years (and the fourth strongest bullish clip in 77 years), it is likely we correct from a position of excess. 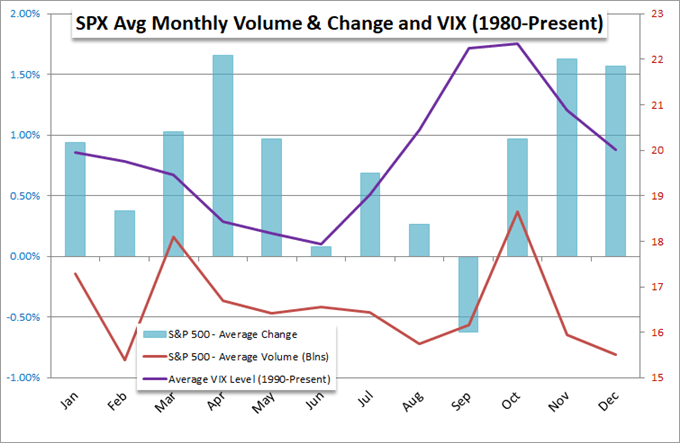 While sentiment is the universal medium of the financial system, the most liquid asset across the system is the US Dollar. On a technical basis, this heavy hitter tentatively committed to a critical bearish break through the final weeks of 2020. Though a milestone registered across many pairs, nowhere was this more technically decisive than in its most liquid cross, EURUSD. Pushing above 1.2150 reflects a breach back above the midpoint of the pair’s historical range – which further reinforces the progress on the break from a decade-long bearish channel back in July. Left to its own devices, it would seem the pull of an extended climb (Dollar slide) would be a comfortable default. However, the Greenback’s role as a ultimate safe haven should not be forgotten. If we find a downturn in risk trends into the open of 2021, it is prone to intensity which would in turn leverage the currency’s latent ultimate safe haven appeal. So, while probability may still favor the bearish Dollar path (risk on), the potential or intensity would be far greater with the alternative. 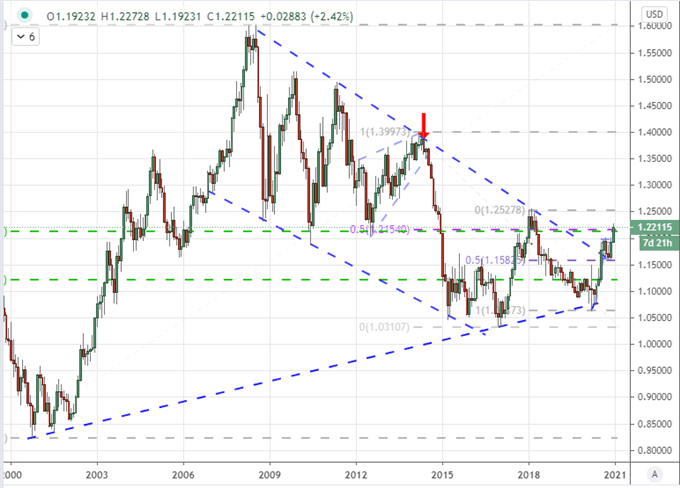 While there are many other Dollar pairs that deserve their own evaluation, I find the group that have been most impacted by trade wars these past few years to deserve closer observation. With the pandemic, attention had turned away from the trade wars that seemed to define overriding fundamental beliefs through most of 2018 and 2019, but it is likely to return as a matter of market influence through the coming year as the Biden administration takes on the frayed trade relations the United States currently holds. USDCAD and USDMXN will be interesting to watch as it is likely that economic restrictions on Canada and Mexico respectively will likely be lifted to a great extent. China, on the other hand, will not likely escape scrutiny and pressure. USDCNH is not exactly a strictly market defined exchange rate as the past six months likely indicate. Nevertheless, what happens here could signal policy pressure that spills into other key areas. 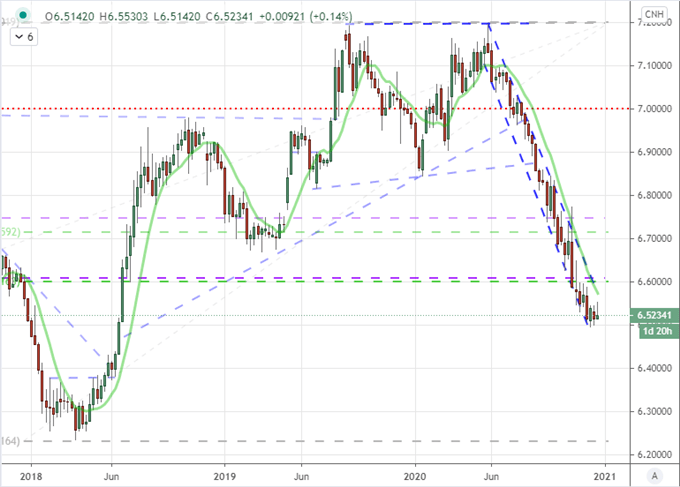 When it comes to the pull of any currency against the US Dollar, it is highly unlikely that there is enough to influence to override the world’s top reserve. The USD is vastly more liquid through transactional exchange and reserves than all other major currencies, but its influence wanes when not being driven by serious momentum. In the absence of a full-tilt risk or equivalent move, a currency to give the Greenback a run for its money (pun intended) into the start of the new year is the British Pound. As the post-Brexit trade discussions wind down, there are still a great many uncertainties. However, the fog is slowly starting to lift. That is likely to induce the Sterling to rise barring any unforeseen fresh local crises. I will be watching the 1.3600 – 1.3200 range for GBPUSD closely to start 2021. 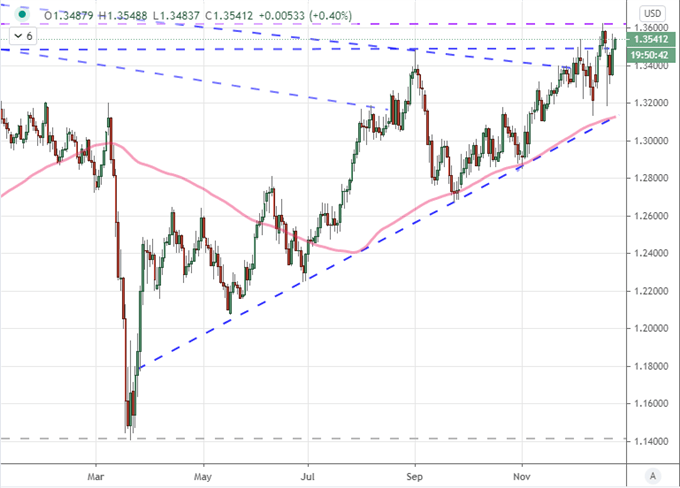 While I do think the technicals on GBPUSD make for a fairly clear picture, my preference for Sterling actually leans towards GBPJPY. There remains a significant exposure for this pair to the prevailing winds of investor sentiment, but there is a more straightforward view of it versus a frequently surly US Dollar. We are on the verge of a large trendline resistance around 140.00/141.00 and the pair is very close to its historical low with substantially greater precedence for range higher. 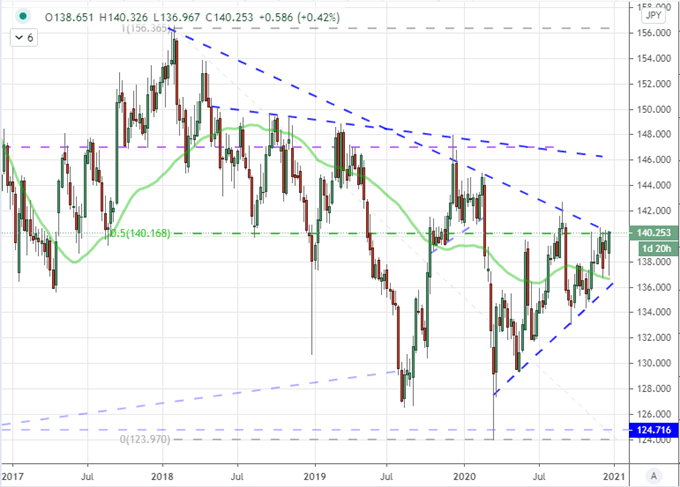 While there are many other traditional assets for which I want to evaluate for a January opportunity – and which I will certainly chip away at in the new year – it seems appropriate to pay some attention to one of the best performing benchmarks of this shortened ear of trading: Bitcoin. While the general analysis of overall trend to BTC applies to the other major coins, none have seen critical mass of this particular benchmark. That has translated into the incredible explosion higher in 2020 with a particularly acute December charge to record highs. There is much analysis that has been processed to suggest that this is a deserved and natural move, but I believe it is more swept up in speculative fervor than any traditional fundamentals could justify. That doesn’t mean its collapse is imminent by any means, but it does leave it at certain risk as with any asset. And, its significant outperformance relative to the likes of Ripple, Etherium and other top counterparts may eventually act as its moderating target.

Chart of the BTCUSD and XRPUSD (Weekly) 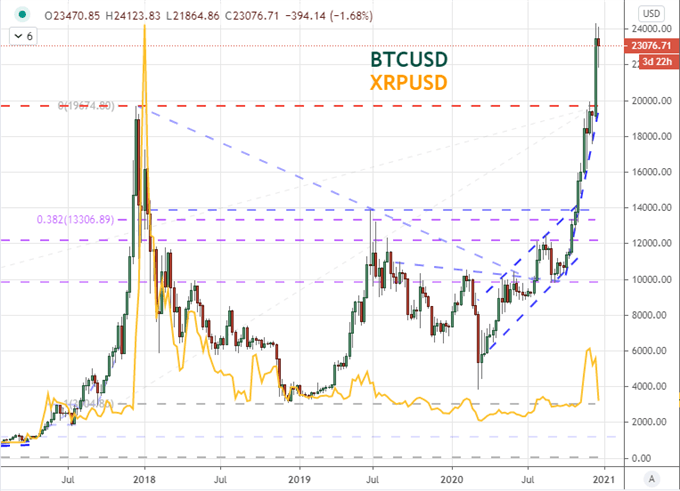