With a host of systemic themes still exerting important fundamental influence on the global financial markets but flying in competing directions, the mixed performance of risk assets at present shouldn’t come as major surprise. Through the speculative fog, the S&P 500 would still earn a push to a fresh record high close without also notching a record intraday high. Meanwhile, global indices, emerging markets, carry trades and commodities were a mixed bag. With competing headlines between rising Covid cases and the UK’s first Western country approval of a vaccine, stimulus talks in various stages of progress and growth warnings it is difficult to hit critical mass in conviction to override year-end liquidity concerns. The potential is still there, but the trends will not just fall into place. 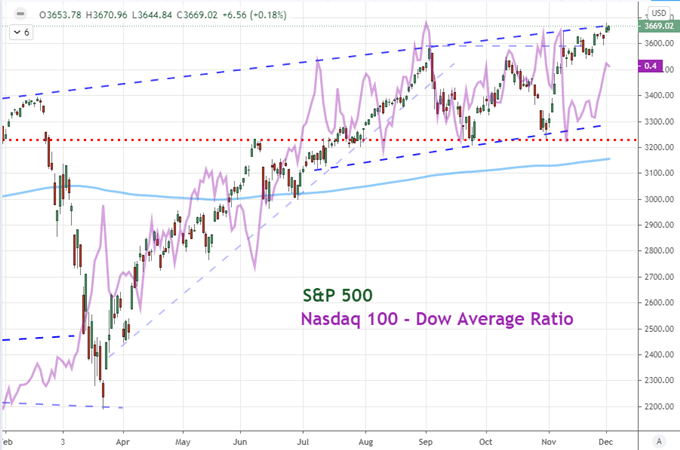 Risk appetite is a universal medium for the financial markets and often the ultimate manifestation of market intention – versus catalyst urged by headlines and scheduled event risk. There are a host of high profile themes that could readily take the reins for short-term speculative intent, but they are presently pushing a mixed view for investors. Without a strong banner for the majority of market participants to follow, a strong trend in these coming weeks will likely be difficult to sustain even if we have some time until the full liquidity drain through the final two weeks of the year. 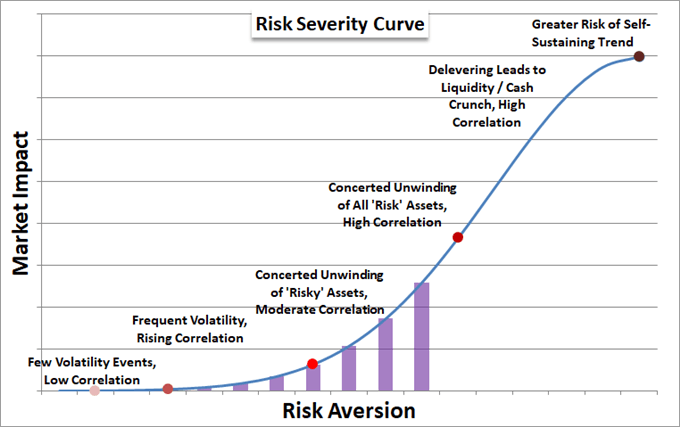 Dollar Slides but Is This Really a Dollar Move?

With the proliferation of meaningful trends drying up, the Greenback’s own slide is put into greater relief. The DXY Dollar Index slid to a fresh low this past session after a gap lower through the brief downtime to trade at levels not seen since April 2018. The momentum is perhaps not the most impressive, but the relentlessness stands out. On a technical basis, this benchmark is now attempting to slide below the 38.2 percent Fib retracement of the 2008 to 2017 bull wave which many medium-term tech traders are likely aware. Naturally, this kind of progress would suggest that the world’s most liquid currency is in charge for trend development. 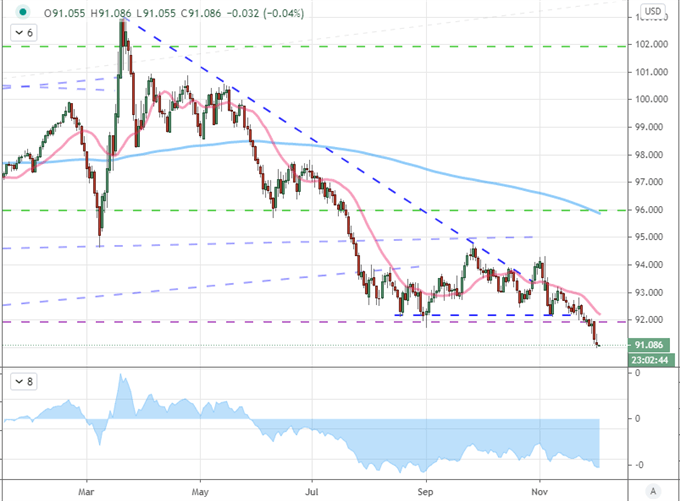 A challenge to the idea that the Greenback is indeed in charge itself comes when we compare the performance across various ‘majors’. GBPUSD was actually lower this past session in a retreat back below 1.3400. USDJPY was little changed after a day of volatility that kept near 104.50. AUDUSD on the other hand was edging above 0.7400 for a possible spark of anti-Dollar live. Yet, an important distinction for the DXY is that it is trade-weighted. That puts a disproportionate weighting to EURUSD – a pair which extended its charge to a two-day rally of 1.6 percent. This cements the 1.2000 range top break and stands out for performance.

Learn more about technical channels and shifting former resistance to new support in the Technical Analysis module of our Education section.

Chart of the EURUSD (Weekly) 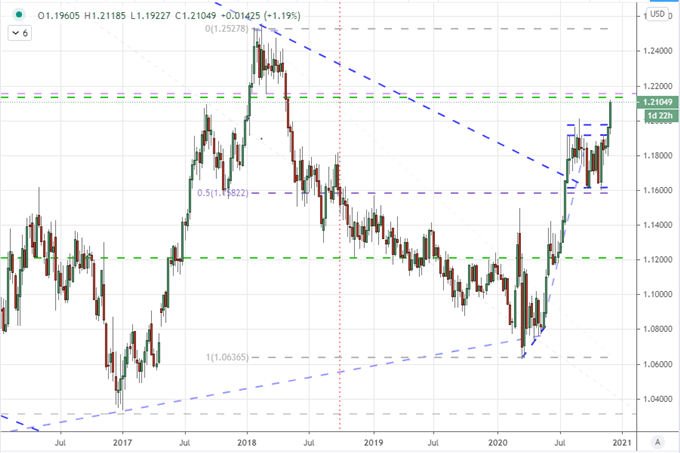 To fully appreciate the lift FX traders are attempting – or stumbling into blindly – with EURUSD, we need to look at the higher time frame charts. On the monthly, the congestion break is the fulfillment of holding former channel resistance as new support for projection. What’s more, the next round of key overhead comes into view. The midpoint of this top liquidity currency pair’s historical range is situated just above 1.2100. We pressured this level back in 2018, but it hasn’t likely lost its influence with so much recognition.

Chart of the EURUSD with 20-Month Moving Average (Monthly) 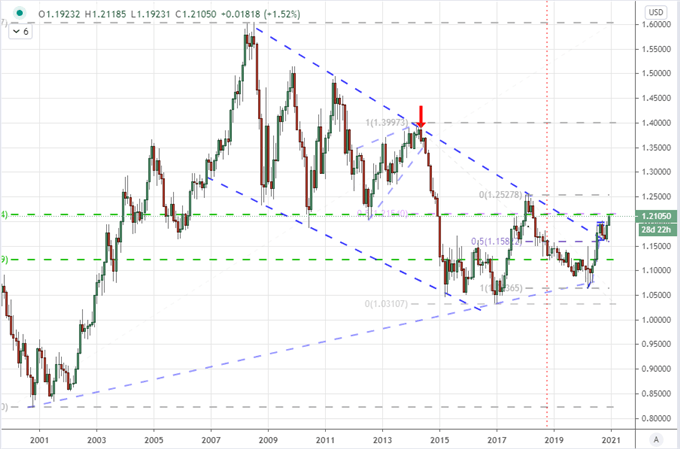 With such a robust move from a ubiquitous currency cross, the natural assumption is that this is a drive urged by the more liquid of the two – the Dollar. Yet, the Greenback was showing a more uneven performance across its board. So, perhaps the drive originated from the Euro? Looking to other EUR crosses, there was much more of a showing in drive. One of the most impressive moves on a technical front in my opinion was through EURJPY. A break through 126 sheers a ‘psychological level, but more importantly it broke a trendline that stretches back six years along with the midpoint of the range back to the beginning of 2018.

Chart of the EURJPY with 1-Week Rate of Change (Weekly) 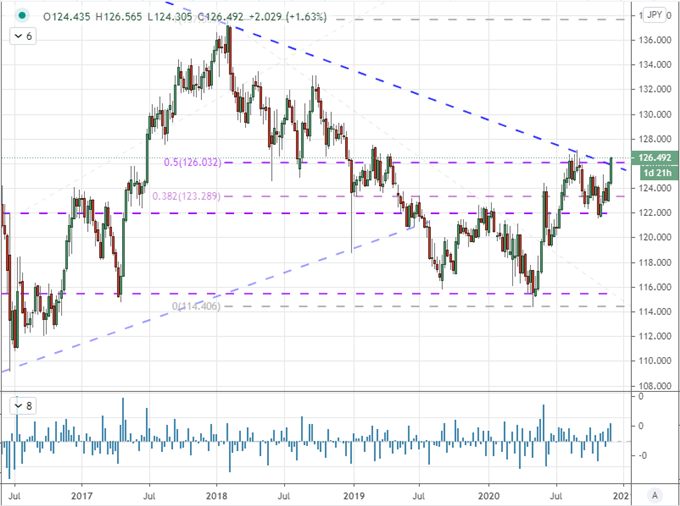 ‘Other’ Major FX Currencies to Watch

Another Euro cross rousing an impressive performance was EURGBP. This charge above 0.90 to earn a fairly distinct technical break from dwindling range. This likely drew from the Euro, but it was likely also a factor of the Sterling’s slide. The Pound was under pressure this past session with concerns around failing Brexit talks offsetting the favorable news that the UK approved Pfizer’s coronavirus vaccine. It is this relative trouble for the Sterling, Dollar and Yen (for risk trends) that likely feeds the Euro’s appeal as an ‘alternative’ to even more troubled currencies.

Chart of the EURGBP (Daily) 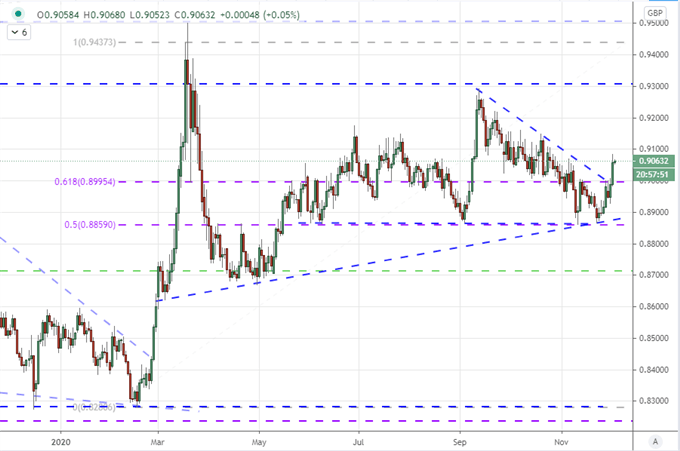 Another alternative currency that deserves a closer watch moving forward is the Chinese Yuan. While impressive in its own right as is slides back to a multi-year low in one of the most productive trends in the liquid FX market, there is a significant fundamental backdrop here. The Biden administration suggested yesterday that it would not move to immediately unwind the Phase One trade deal terms brought by the Trump administration. What’s more, it was recently announced that the White House is looking to sign a directive that would delist all Chinese companies from US exchanges. It is worth keeping a wary eye on USDCNH and the Shanghai Composite as these measures could turn into more troubled systemic matters under the right (or wrong circumstances). 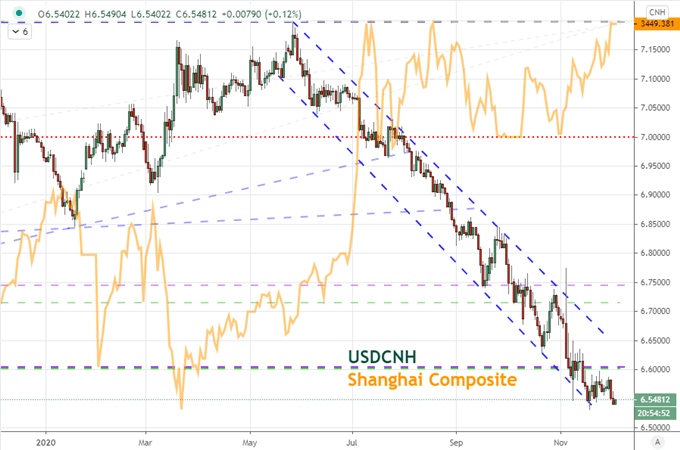