With the market’s most familiar US equity indices pushing record highs, we are seeing the fundamental backdrop starting to lose serious traction when speculative appetite could most use the reinforcement. With warnings from the IMF that growth potential is noticeably flagging, news that the US Treasury secretary is calling for a withdrawal of stimulus and liquidity naturally yields to year-end restraint; the boundary to sustain a run to fresh record highs for the likes of the S&P 500 and Dow is materially raised. So, while the SPX historically averages a material rally through the month under a more restrained volume and volatility backdrop, traders would be justified in expressing caution in how they approach their risk exposure. Generally speaking, it is more difficult to drive risk benchmarks to record levels than to move back into an established range. That is question facing the US indices: the high threshold of drawing investors to ‘cost’ of marginal investment versus a comfortable shift back into a well established range. 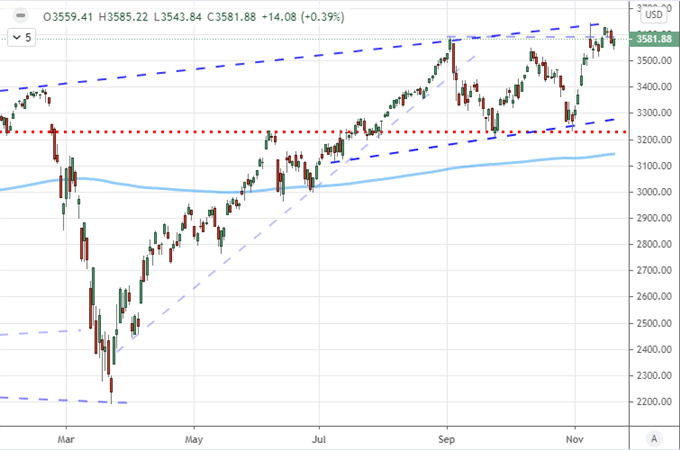 While the US indices are my preferred measure of risk appetite owing to their appeal among market participants rather than their suitability for conviction, there is certainly contrast that can be monitored to give context to follow. Consider the rotation into and out of the likes of the S&P 500 versus global counterparts. This week, we have seen a US indices only modestly waver in the face of serious fundamental concerns; but relative to other risk benchmarks, there may be a more pressing concern for which we should take stock. When comparing the SPX to the ‘rest of world’ ETF (VEU), we have seen a breakdown in technical terms. This ratio has offered up a trendline break that stretches back multiple years and a slip below its representative 200-day moving average that signals something more than a mere wobble. Is this a leading indicator for a broader risk problem? 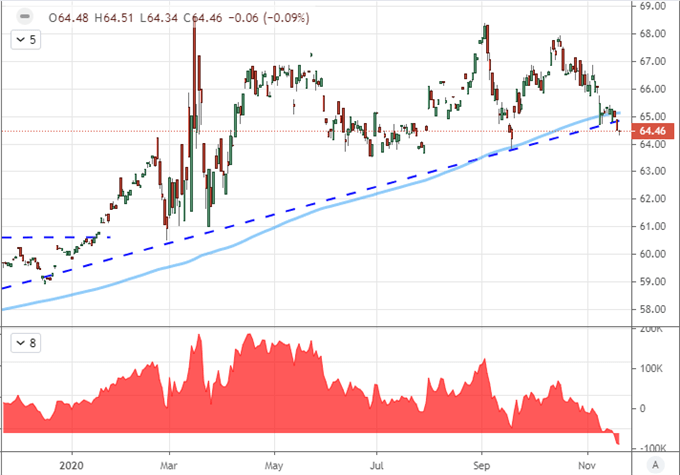 Is a Resurgence in Coronavirus Cases a Leading Fundamental Warning Sign?

Similar to the early warning sign that a technical rotation away from US equities may signal to astute market participants, there may fundamental cues afoot that could indicate deeper straits for the financial system. The coronavirus cases accounted for worldwide has surpassed 55.6 million while the death toll has topped 1.34 million. The human toll this represents is concern enough, but the amoral markets may finally be shaken to recognition by the economic impact that this will inevitable have. We have heard the warning by the run of central bank heads this week, but the IMF’s managing director echoed the reality that the second wave is threatening recovery – often conflated as genuine expansion. Market concern around Covid-19 (as measured by Google search) is building which has previously preceded recognition in economic fallout through matters like unemployment. 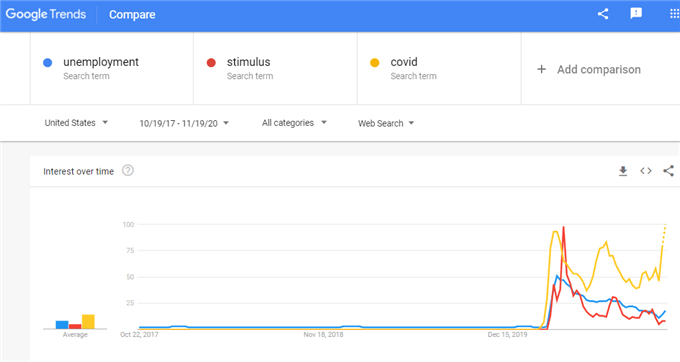 Cases of coronavirus in the US should be of particular interest considering not only that it is the largest country in the world, but further that the country’s outgrowing President has refused a national response to help stem the spread at the same time the government has failed repeatedly to offer a financial response in the former of fresh stimulus to reinforce the expiration of the initial fiscal infusion (the CARES Act which expired back at the end of July). What was particularly interesting to me this past session was that President-elect Joe Biden suggested he was not looking to implement a national lockdown. That can afford short-term favor to the US economy and the potential of domestic assets; but the long-term picture will not be absolved of its long-term issues.

Chart of Coronavirus Cases in the United States 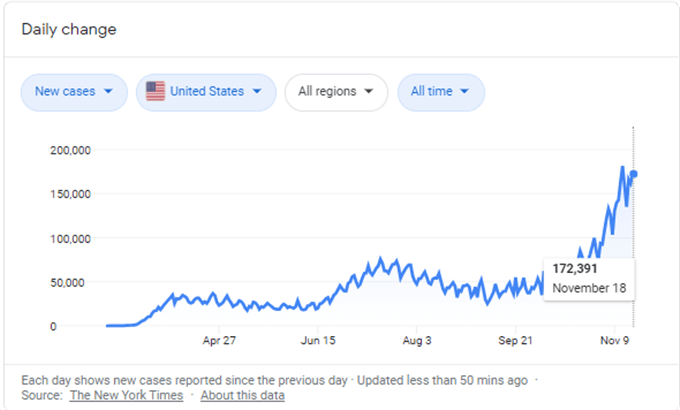 Chart from Google with Data from New York Times

EURUSD Still Stands at the Nexus of Fundamental Issues

While there are many markets exposed to the whiles of systemic fundamental trends, few benchmarks are as indicative of the nuance in the key themes as EURUSD. For the US Dollar, the reports that US Covid cases continue to trend higher combined with reports late in the day Thursday that Treasury Secretary Steve Mnuchin was calling on the Fed to return some $400 billion in stimulus the government had provide as part of the pandemic fiscal response. Given the struggle from the government to pass a follow up infusion of economic support as a year-end cliff in jobless benefits approach, this is troubling news indeed. Yet, the Euro is not simply set to take advantage. It was suggested by SWIFT that the Euro had overtaken the Dollar in terms of use in transactions through October (first time in eight years), but serious concerns are starting to arise for the second most liquid currency such as a block to releasing the more than 1.8 trillion euros in stimulus that had given the currency a significant lift back in July. 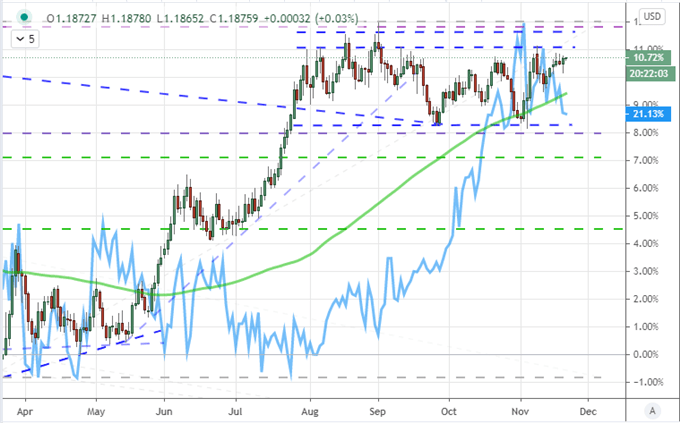 Should the Euro’s sanctified fundamental status continue to crumble, there are a range of crosses for which we should take stock. One pair that could find another layer of fundamental interest on this backdrop would be EURGBP. It was expected earlier in the day Thursday that a key update was coming on the state of post-Brexit trade talks the following day. What favorable winds this could have incurred were disrupted by news from the EU’s head of negotiations, Michel Barnier, that a member of his team had tested positive for Covid-19 and they would be need some time for recovery amid isolation. That does not bode well for the Euro, but is the Sterling the worse off for this news? 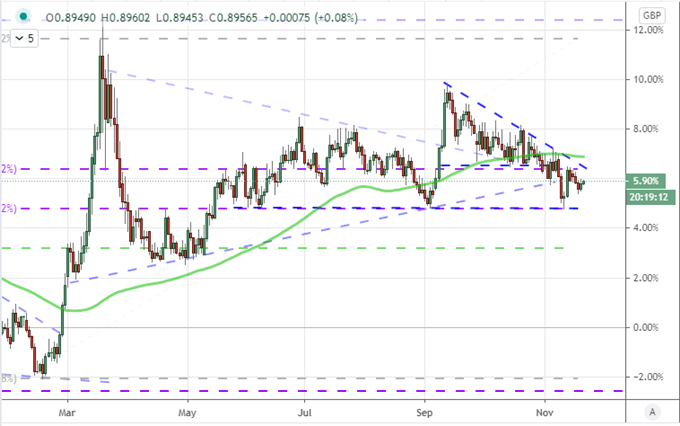 Finally, I am keeping close tabs on the anti-currency appeal of the world’s most popular cryptocurrency: Bitcoin. On a weekly an monthly charge we can clearly see the record high of ~20,000 coming into view. With a steady serious of daily advances against momentum of envy (not many markets are showing this persistence of direction), global macro traders should consider what this is indicating. There is a strong correlation to traditional risk assets from this benchmark, but perhaps there is a deeper current of interest arising from the need to find alternative to traditional fiat assets at play? Failing confidence in the world’s most ubiquitous assets all the while ‘supplies’ continue to balloon doesn’t leave many options. I am unsure as to what motivation is at play here, but I am nonetheless interested the charge.

Chart of Bitcoin with 100-Day Moving Average, Disparity to Spot and ‘Wicks’ (Daily) 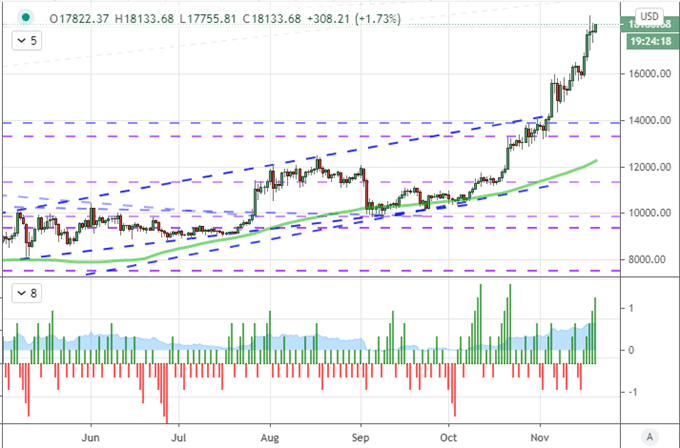