Despite cresting a record high to start the week, the US benchmarks in the S&P 500 and Dow seem to be finding little speculative motivation to let momentum carry markets forward. In a fundamental overview of economic potential, recognition of Covid vaccine distribution timelines and stimulus restrictions; it should come as no surprise that a stretch to record high levels isn’t simply a matter of course. While there is certainly a contingent of market participants that consider inertia a bullish force to break, it is important to appreciate that there is a need for steady inflow of speculative funds at record levels for cost of entry. In other words, there needs to be such conviction that investors are willing to pay record price to add or enter the market at current levels and further be confident that there is opportunity in the foreseeable future to unwind at higher levels with manageably low risk for market retreat. Looking to the standings of US indices – much less the backdrop of the economy – and it is hard to imagine the mass complacent bid. 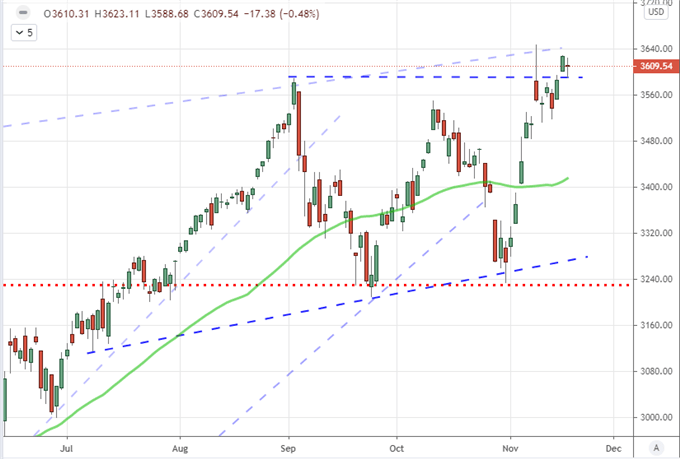 On a technical basis, the S&P 500 signals a certain measure of hesitation. While the ‘risk’ benchmark has pushed a record high to start the week, this past session has generated a doji candle which reflects the indecision disrupting bullish intentions. That further fits the ‘spinning top’ formation that last week’s candle secured. Relative to the loss of traction, I still believe it an important signal that the once, high-flying tech sector represented by the Nasdaq 100 has overtly struggled this past week. This is the pinnacle of speculative appetite these past years and its absence is not gone unnoticed. The latest reminder of this shortfall is Tesla’s performance Tuesday. The favorite among investors in Reddit boards and Robinhood (new to trading) gapped higher following news that it would be added to the S&P 500. Yet, TSLA wouldn’t hit a record of its own nor would it inspire broader measures to commit to a bullish phase. 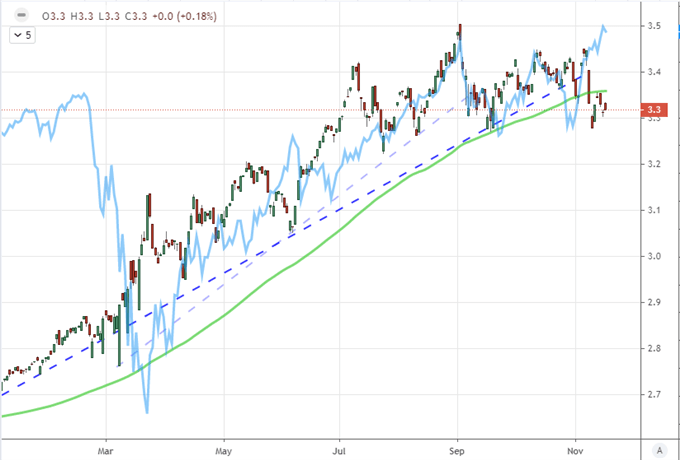 To carry markets to record highs and beyond, there needs to be some measure of conviction behind the market. This week’s most capable lever was the vaccine news from Moderna. However, despite the reports that a second pharmaceutical has a highly effective (approximately 95 percent) drug to fend off the coronavirus, the market doesn’t seem to be taking the lead. In fact, even MRNA shares have shown an immediate easing after Monday’s gap higher. This isn’t to mean that the headlines aren’t promising. Rather recognition of the timeframe with which the drugs will be distributed and the economy reopened are converging with a possible extreme in a ‘buy the news’ pricing of this eventuality of a medical solution to the world’s shuttering. 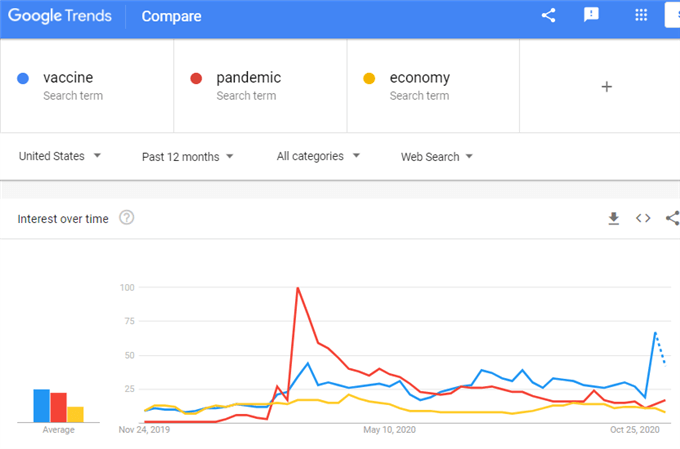 The abstractions of the coronavirus wasn’t the only fundamental weight for the market to account for this past session. Economic activity was another distinct measure. On the data side, US retail sales offered direct insight on the health of key economic drivers – the US consumer – with a disappointing 0.3 percent marking a pace of reticence. More interesting though in my book was the economic forecast given by the leaders of the Federal Reserve, European Central Bank and Bank of England Tuesday. Each mentioned the improved outlook with talk of vaccine and all warned that it would not alleviate the economic burden they all projected. 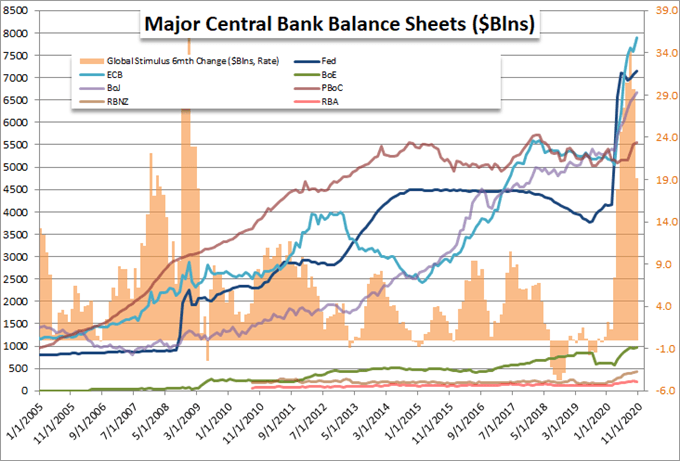 We are trading through the final six months of the year and the seasonal pull of year-end conditions can certainly be felt. That isn’t to say that we couldn’t witness a swell in volatility or even an atypical trend through the normally restricted twilight of the calendar year. However, statistical norms average out in this way for a reason. While some risk milestones have notched new highs recently, I still believe that course will struggle for progress. Risk aversion could be more ‘productive’ if properly triggered, but that seems to be introspection that the market would rather avoid for the time being. As such, range/congestion seems more appropriate. Pairs like EURUSD have technical guidelines that may take advantage of the broader indecision along with its own overlapping struggles. Yet for pace in traversing congestion, pairs like NZDJPY strike me as more practical. 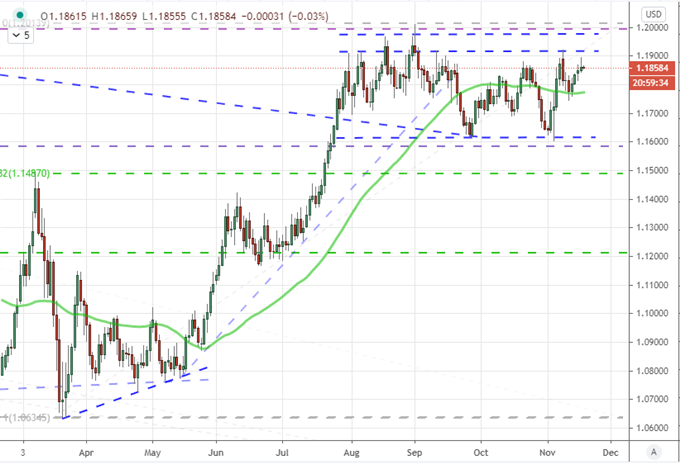 Meanwhile, while congestion is still the standard for the broader financial system, we are not without our alternative measures. USDCNH for example continues to press multi-year lows. This dubious (in market-derived motivational terms) exchange rate has slid steadily over the past six months as China has attempted to telegraph its success in transitioning to more domestic-led growth while releasing ‘favorable’ data like we have seen Monday. Yet reports of bond defaults and new regulations attempting to curb excess speaks to an uneven enthusiasm. 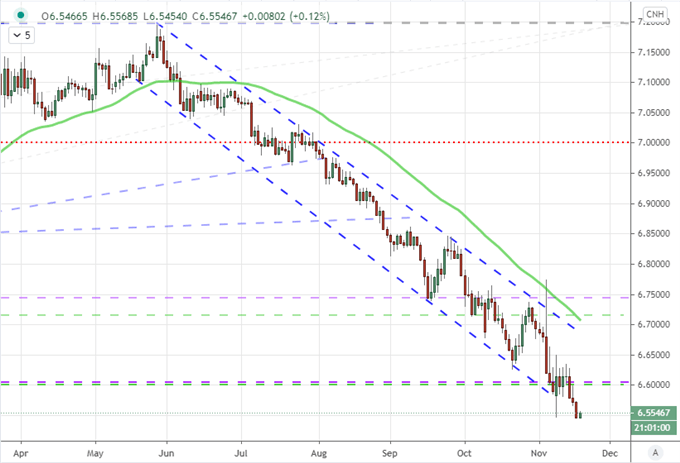 Another exceptional run due credit is the surge in Bitcoin these past weeks. This leading cryptocurrency is working on its seventh consecutive week advance which has brought it to 18,000 and within easy reach of previous record highs. This has notched a record high market cap (over $335 billion) and offers another avenue of popular investment outlet that reminds me that this market maintains a strong correlation to the likes of the S&P 500. What is most remarkable about this particular charge is that it is coming with far less fanfare (news search interest) relative to what we saw during the bubble of late 2017. 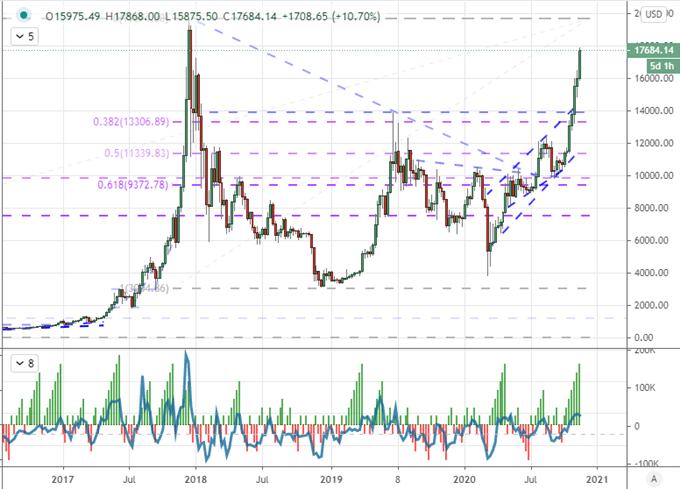