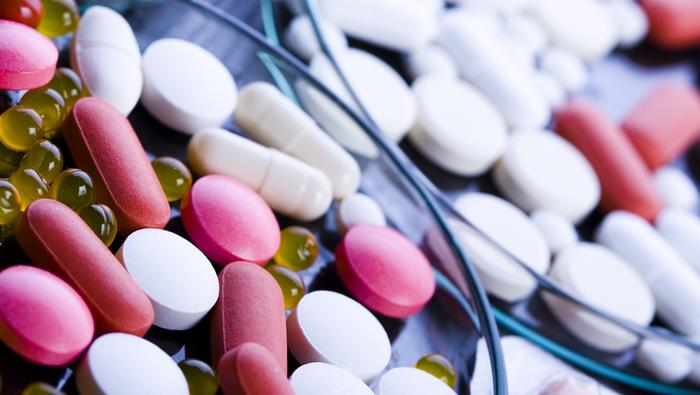 The Week Opens to a Fundamental Echo and Similar Market Response

In what seemed almost like a skip of the fundamental record, this week opened to a remarkable echo of last week’s opening headlines and subsequent market moves. A general ‘risk appetite’ charge for capital market leaders was spurred by reports that a leading pharmaceutical measured remarkable success with its coronavirus vaccine. Last Monday, the spark was from breaking headlines that Pfizer was showing an approximate 90 percent success rate with its drug. This week, the news was from Moderna and the effectiveness was closer to 95 percent. Notably, the bullish gap from the likes of the S&P 500 this go around was materially smaller than what it was on November 9th, but at least the follow through was a little more material. Another similarity that market observers would do well to keep tabs on was another slide in the Nasdaq 100 relative to the Dow and S&P 500. This may signal a more universal lift in risk trends – or more likely, a temperance to the blind speculative appetite of past months. 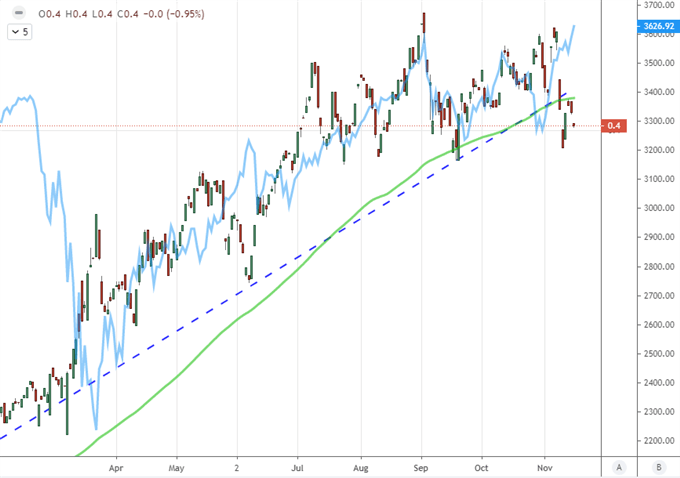 Is the news from Moderna genuinely reassuring to the speculative rank or does it deserve the persistent skepticism? Setting aside the societal benefits of a second vaccine showing this level of success this far along in trials – which is enormous – a second drug that is showing such remarkable success against the source of the global pandemic is very encouraging for freeing the economies from the dampeners of national shutdowns and general reduced interaction that is the root of growth. PFE’s news saw its shares rocket higher only to retreat through the rest of the week – with risk trends struggling in this wake. Thus far, MRNA is showing similar pattern, but its reversal isn’t nearly as intense. 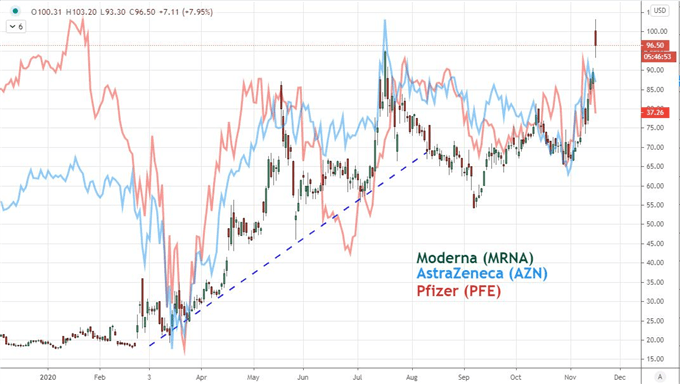 Where vaccines become genuine economic boosters is the timeline with which they can distributed to the world. Last week, enthusiasm faltered as mass delivery was seen as taking months to achieve. With Moderna’s new therapeutic, the timeline was projecting supply to the most at-risk Americans starting in the second half of December (HHS projected 20 million Americans) and most of those in the US that wanted to receive the drug inoculated by the second quarter. With a second drug, the efficacy of this economic support looks more practical.

Chart of ‘Vaccine’ and ‘Pandemic’ Search via Google Trends (Daily) 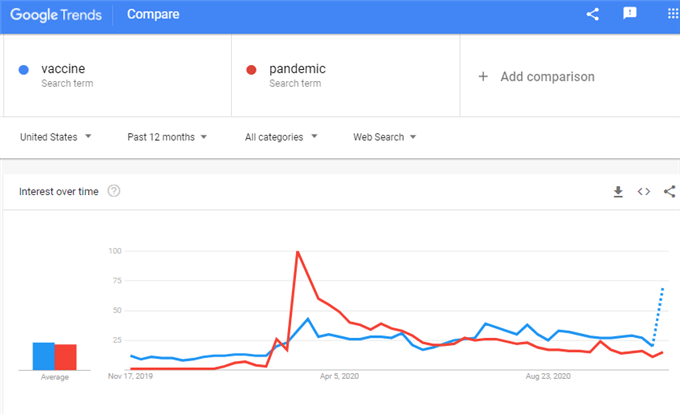 As promising as the tempo of vaccines looks after eight months of bleak circumstances, there remains a cumulative impact to overcome. Global cases of infection from Covid-19 have neared 55 million while deaths have tallied over 1.3 million. There are multiple countries that are currently in a second phase of shutdown – UK, Germany, France, etc – attempting to break the spread of the plague. Looking to the United States specifically, the recovery from the shutdown in March and April is still far from complete. As a country that has avoided a second shutdown and thereby theoretically in a better position to secure short-term growth, the reality outside of indices and other speculative asset performance is sobering. 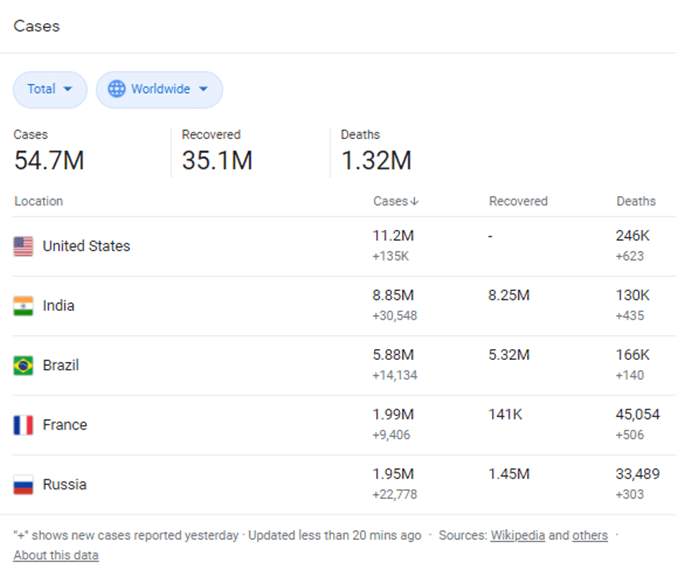 Chart Created onGoogle with Data from The New York Times

For a fundamental barometer, EURUSD remains one of the most remarkable measures to the various fundamentals winds pushing our markets in different directions. The Covid case numbers between the US and Europe are heading on different trajectories. At the same time, the economic trajectory is perhaps amore direct and juxtaposed comparison. This past session, the Bundesbank report suggested the 4Q could see Europe’s largest economy (Germany) stagnate or even contract. That will make Today’s US retail sales and industrial production numbers more interesting. Further, the stimulus contrast between the two economies is seeing another twist. While a follow up to the expired CARES Act in the US is still in the wind, the EU has hit some difficulties in securing its more than 1.8 trillion euros in funds owing to objections from Hungary and Poland. Thursday’s EU leaders meeting will play an important role here. 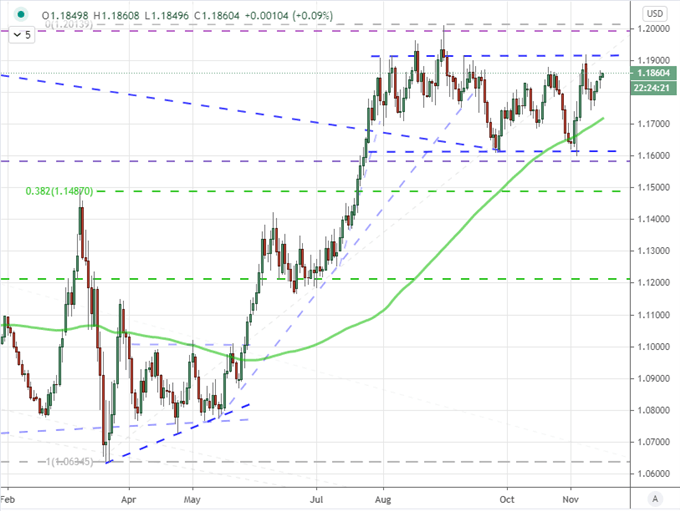 In the less familiar tracks of the FX market, there are a few pairs that deserve a little closer attention moving forward. EURCHF has edged through trendline resistance once again this past session, but the activity level still belies a remarkable backdrop. The Swiss National Bank’s (SNB) Vice Chair Zurbruegg stated Monday that they remained committed to negative interest rates and intervention aimed at pushing down the CHF. This would normally rouse serious concerns among global investors and policy officials, but it has become routine here. The issue is more skepticism that they could effect change rather than a genuine comfort with such policy efforts. Meanwhile, the central bank docket sees the heads of the Federal Reserve, European Central Bank, Bank of England and Bank of Canada on tap for remarks Tuesday. 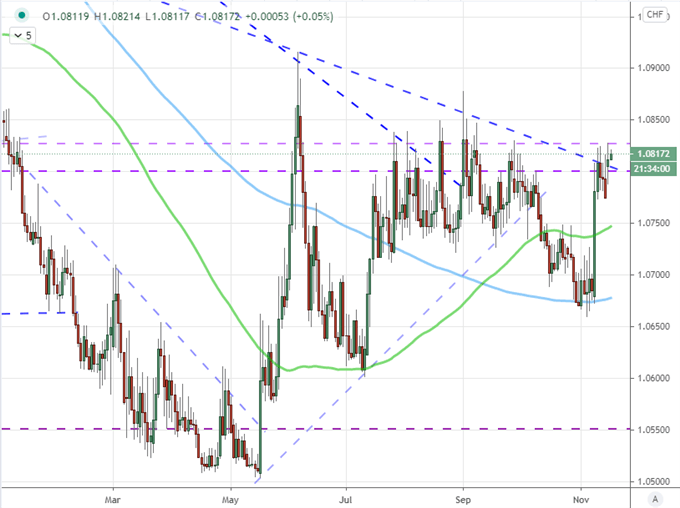 Another interesting cross to watch is GBPNZD. While the pair itself is in a general range of merit, my interests are more centered upon the individual considerations of the Sterling and Kiwi themselves – just so happening to lean towards probability-potential combinations in a complementary lean. For the Sterling, it was reported that the Brexit Minister had stated to the Prime Minister (who is self-isolating after coming into contact with a person confirmed to have Covid) that a post-Brexit trade deal with the EU could come as early as next Tuesday. That could be something of a boon if not already fully priced. As for the Kiwi, the expected event risk is less loaded but the currency’s run is perhaps been over-indulgent for a backdrop that merely hasn’t seen a faster undercut of its value prospect. I’ll be watching technicals for this pair, NZDJPY, NZDUSD, EURGBP and other crosses closely. 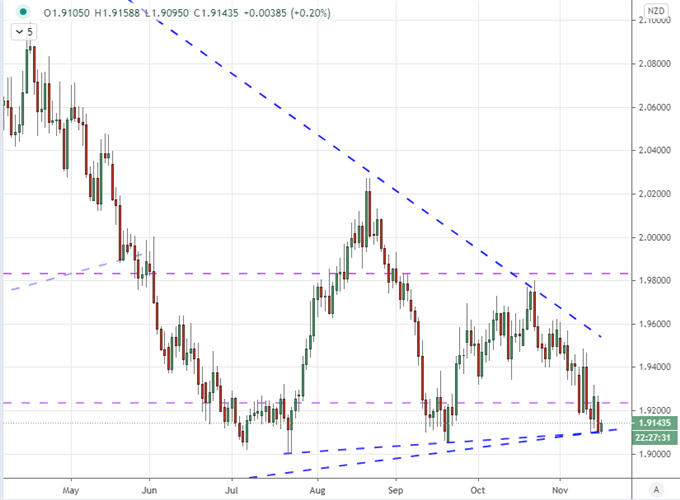