Dow Versus S&P 500 for Risk Scenarios, Similar to EURGBP and GBPNZD Options

The Fundamental Winds Don’t Die Down, But They Lose Drive

There is a difference between volatility and trend. I believe that we are still dealing with the former even though the latter has lost a notable amount of hold over risk assets and other prominent market benchmarks. In practical terms, we have seen the promise behind the S&P 500 run to open this week fully fall apart just record highs were tagged. With US elections still unresolved to American’s satisfaction while the coronavirus spread competes with the still-distant anticipation for a vaccine, we have seen the VIX Volatility index drop from 40 to 25 – though stay notably above the long-term average of 20 for 183 consecutive trading days. These are uneasy markets where a sudden strong wind for risk aversion or risk appetite can find a willing market reaction. So, how can we stand prepared for such potential in sentiment? 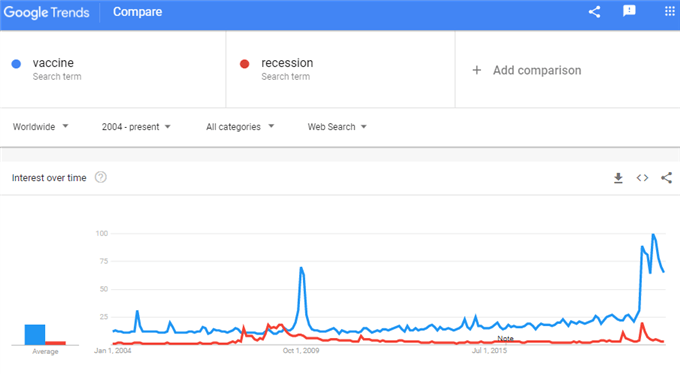 The Scenarios for the Sterling

I believe in operating with a sense of scenario analysis. By that, I mean that there should never truly be a sense of certitude about market outcomes rather we operate with a possibility of a bullish or bearish future depending on how the speculative winds blow. That was the view I was taking with the British Pound this past session. With the Sterling pushing a possible bullish breakout through the middle of the week, there seemed an unmistakable potential for a technical and fundamental ‘follow through’. Among the pairs on my radar for a bullish potential for GBP was the Cable (GBPUSD which cleared 1.3200 and EURGBP which dropped below trendline support at 0.8950. Urged initially to the break by moderate event risk (UK employment data on Tuesday), there wouldn’t be follow through in the run of data on Thursday. September and 3Q GDP, trade and industrial production offered little momentum to override recognition of the economic hardship directly ahead. And in turn, the bullish breaks would fizzle out with pairs like EURGBP abiding by the next technical barrier on the field (range support and Fib retracement at 0.8860. 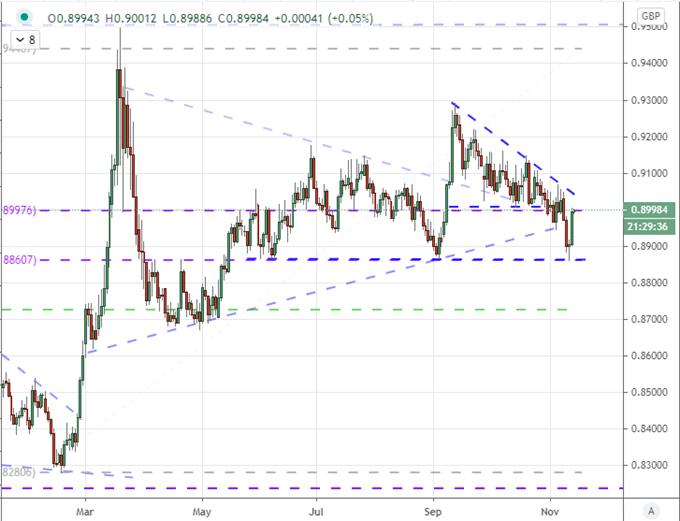 If the bullish speculative charge had fallen apart earlier in the week (Tuesday), the attempt at a break would have fallen apart with technical barriers still in play. Instead, the fundamental charge would run afoul of a ‘convenient’ chart base timing. Yet, there are other pairs that found this turn around happen just in time of Sterling resistance. GBPJPY turned just as 140 came into play as multi-month resistance. Similarly, GBPNZD standing on the threshold of multi-year and month support at 1.9100 would find a floor rather than attempt a critical break. 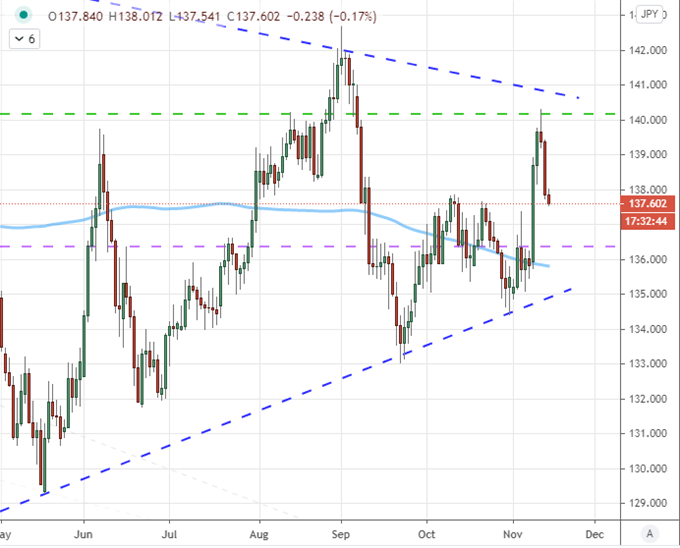 Candidates for a Sustained Run or Reversal in Risk Trends

Using the same notion of a bullish or bearish option for a market with multiple constituents, I have been evaluating the scope of risk trends which have seriously wavered this week. Following last week’s unexpected charge higher amid the uncertainty of the US Presidential election and a surge to record cases of coronavirus virus, key measures like US indices have actually struggled when the threats seems to have actually passed (Biden won the election and Vaccine headlines have been prominent). This seems a case of ‘buy the rumor, sell the news’; but markets have yet to full commit the retreat. If a full pullback is in store as the next leg – importantly timing could see another leg in the prevailing course to upend technical convenience – then the S&P 500 seems well placed as a range candidate having made a stand at the same 3,600 resistance that capped the bull trend back in the beginning of September. 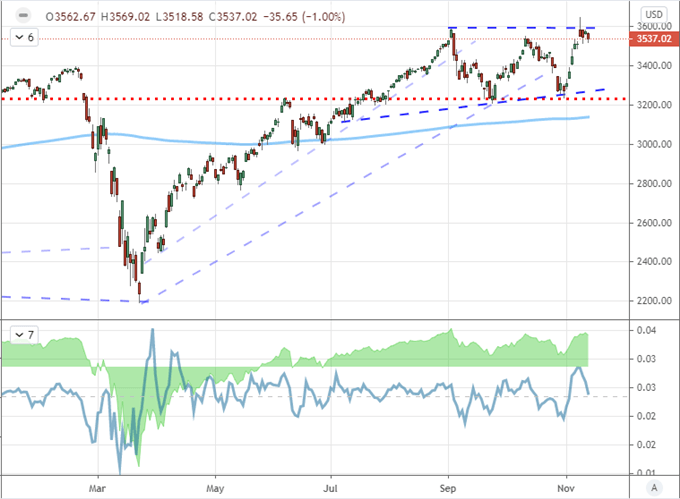 For another candidate of a timeline cap an retreat in risk appetite, the Yen crosses raise another interesting technical and fundamental scenario. NZDJPY had initially produced a bullish break above 72 this week helped along by an RBNZ rate decision. Yet the central banks hold to an extraordinary dovish bearing seems undercut the story that the Kiwi is presented with genuine opportunity simply because it isn’t immediately dealing with negative rates. The NZD is stretched as a lost carry currency and a risk aversion shift through the immediate future would solidify a confluence of a multi-year trendline resistance and overlapping large Fibonacci retracements at 73 as kinetic resistance. 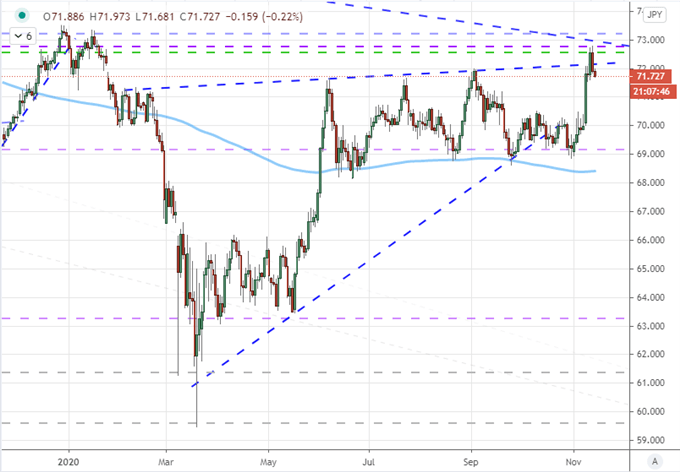 Alternatively, if speculative appetite regains its footing, the options for benchmarks that are well positioned for sustained climb is a far narrower field. There isn’t much ‘discount’ on sentiment across the market – and the past week certainly hasn’t staged much in the way of pullback. Looking to markets that have failed to take advantage of recent swells in ‘risk on’ would run risk of pursuing a candidate that simply isn’t responsive to market tides. That said, I am watching the Dow. If risk aversion continues through Friday and into next week, it can significantly erode the appeal of this benchmark for mounting a drive higher. However, in the scenario where the market finds its footing in the immediate future, a ‘former resistance as new support’ and propensity for bullish bearing with fundamental stance for projecting growth make for a ready candidate in this blue chip index. 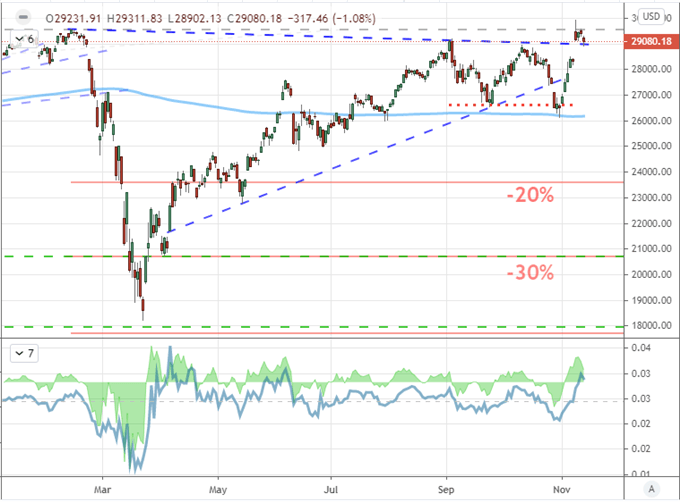