Risk Trends Take a Deeper Cut Under the Surface

We have fallen significantly from the risk appetite charge that opened our markets to the combined news of a victor in the US presidential election and Pfizer’s report of a successful coronavirus vaccine. Both themes have been challenged for their ability to sustain bullish interests through immediate speculative demands – with a backdrop where record highs for benchmarks like US indices may necessitate greater depths of conviction to progress even further. Following up on its rally to an intraday record high, we saw that the S&P 500 tended its reversal from Monday’s tagged high. That said, the market didn’t simply dive freely into the broad range it has caved out these past few months. The ‘wicks’ or ‘tails’ on the daily candles so far this week speak to both volatility and indecision. 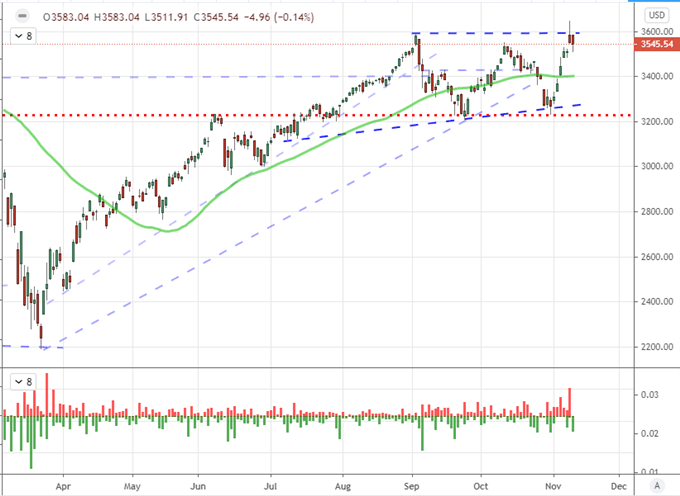 Generally speaking, the broad SPX is just one of many risk-leaning assets that has suffered a significant setback this week. My preference for gauging conviction for investor sentiment in the capital markets is assessing intent across a range of assets that would otherwise be motivated by distinct themes if not for the influence of an all-consuming ‘risk appetite’ charge. That said, emerging markets, carry trade, commodities and other measures that I keep tabs on reflected the same pressure. Yet, as a distinct signal, I found it particularly remarkable that one of the top performing sentiment measures from the past few years, the Nasdaq 100, was in a deeper retreat than even close counterparts. In fact, the NDX’s performance relative to the S&P 500 saw the ratio break its 2020 bullish trend and mark the first close below its 200-day moving average since October 2nd, 2019. 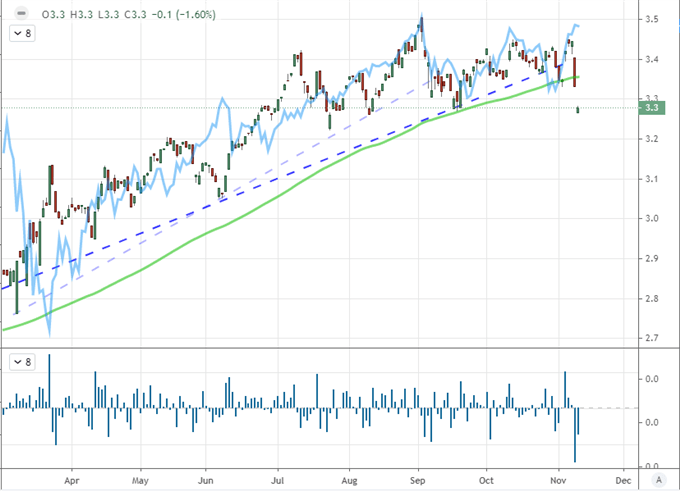 While the markets seem to have cooled on the urgency of elections an vaccine new, it is important to keep track on each matters development. Both issues have the capacity to generate significant tumult in the broader market. From the US election, we are technically in the transitional ‘lame duck’ period where Joe Biden’s administration would be preparing his forthcoming four-year term, but the Donald Trump continues to dispute the outcome with his Attorney General and Secretary of State issues remarks that have raised no small amount of concern over the stable transition of power. In contrast to the uncertainty that draws, the news of Pfizer’s ‘over 90 percent effective’ vaccine and Eli Lilly’s drug (monoclonal antibody which prevents those with a mild infection from getting worse) are encourage news. The concern is the timeline with release relative to what the market already expects in its enthusiasm. 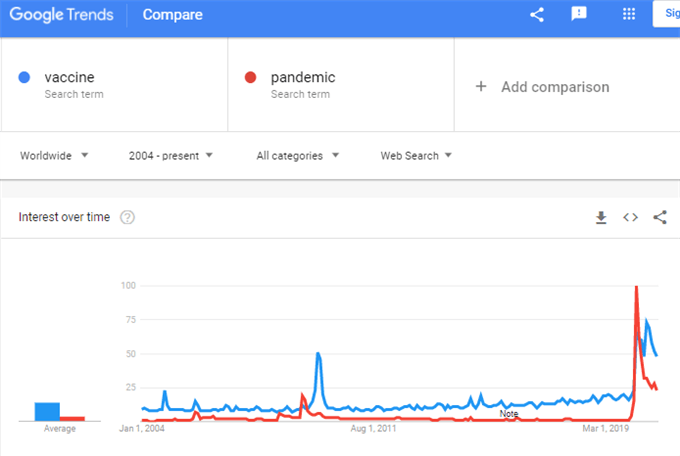 As investors sort out their sense of fear or concern relative to these big-picture issues, perhaps we will see interest in the more elemental growth potential gain some traction. This past session, we had a run of important sentiment surveys. Australia’s business sentiment survey improved while Japan’s and Europe’s economic confidence figures took significant hits. The US was split with the NFIB business measure holding steady while the IBD economic reading dropped. Expectations will be traded for action Wednesday as China’s renowned Single’s Day (11-11) shopping holiday will act as a measure of consumer health in the second largest economy in the world. Last year, spending over the 24 hour period rang up over $30 billion in sales. For comparison, Amazon Prime day this year – hailed as a huge boost for consumption – accounted for just over $10 billion in spending. 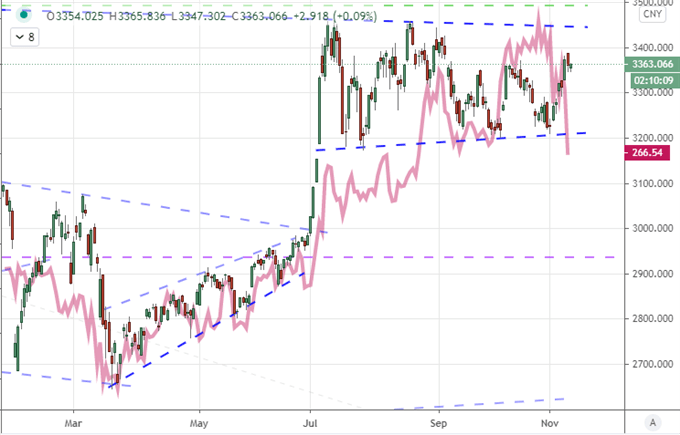 As is often the case, those that are gauging competing fundamental forces of the global financial system can garner important insight into influence from the US Dollar. As a measure of risk appetite, USDJPY’s rally alongside the Dow Monday was just as readily capped by a dubious market this past session. The technicals however were a little more robust when it came to evaluating the market’s sense of conviction that a new trend could be roused for bulls. The overlap of the 100-day moving average, Fibonacci retracements and trendline resistance held firm. Retail FX positioning abided the ceiling abruptly at resistance with a sharp drop in long positions according to IG data. 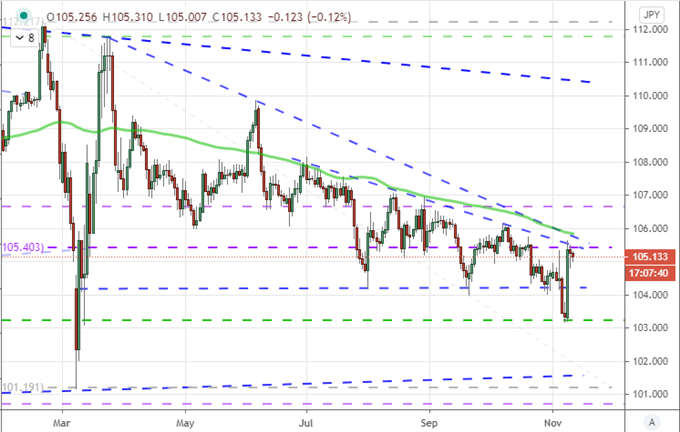 A more ‘mundane’ fundamental highlight would come through the Sterling this past session which was urged higher across the board on better-than-expected employment statistics. Claimant counts in October fell by -29,800 against a projected increase of 50,000. That would lead to a GBPUSD break above 1.3200 as well as a sheering through 8-month trendline support for EURGBP below 0.8950. While impressive fare, I remain dubious that this will simple set a trend. 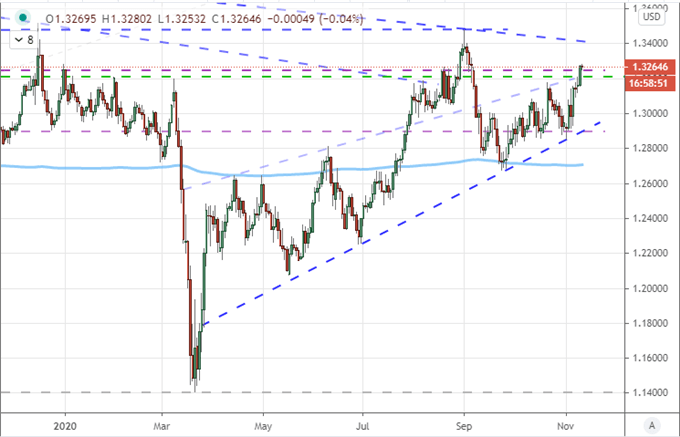 Finally, USDMXN is may have seen its tempo falter somewhat from Monday’s initial tumble, but the consistency remains. The pairing is moving on a 7th consecutive daily decline which is a drive that has not recently aligned with meaningful intent for reversal, but in 2018 and 2019 signaled some impressive turns. I am watching this pair closely as the dynamic pits the Peso as the higher return currency (Dollar as safe haven) and it carries the building pressure of the improving trade expectations under a Biden Presidency for a long-term boost for the Mexican currency. 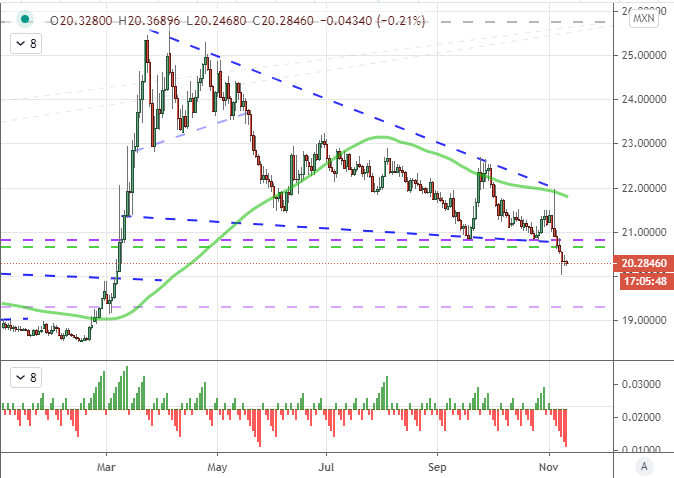