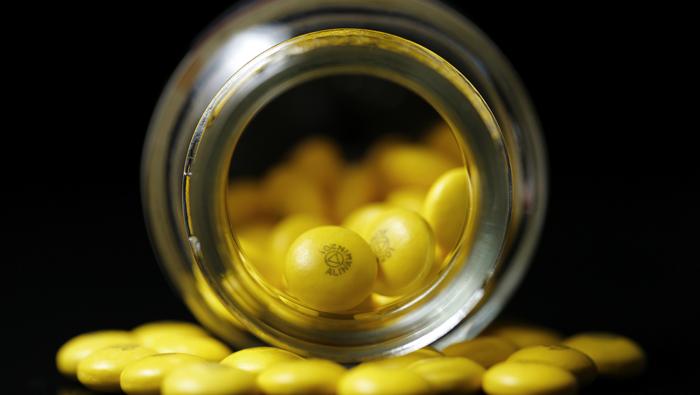 An Unexpected Competition for Top Fundamental Theme to Start the Week

Investors were fully prepared to jump back into the markets and work out how the news of Joe Biden surpassing the 270 electoral votes threshold on Saturday and winning the Presidency would play out for risk assets. Yet, this headline was unexpectedly challenged from market-moving primacy when it was reported by pharmaceutical Pfizer that its coronavirus vaccine was 90 percent effective and could soon make its way to the market. Given that there was a ‘risk on’ charge to kick off the first session of the week, it could be argued that these two matters saw their influence converge to push benchmarks like the S&P 500 significant highs (this particular US index hit a record intraday). However, there are some interesting speed differences amongst sentiment measures I follow and history has given plenty of reason these past months to remain cautious on unbridled enthusiasm – pursuing trends versus the short bursts of enthusiasm that has been more hallmark. 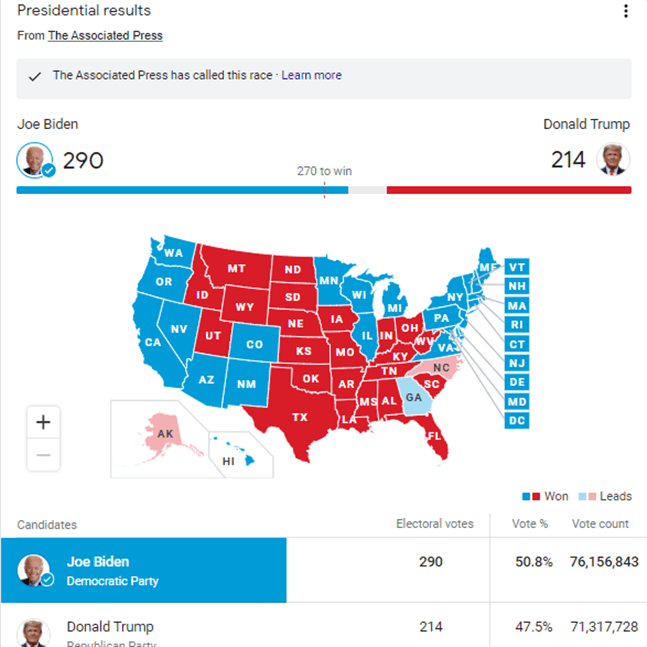 Chart from Google.com with Data from Associated Press

Considering the transition after the US Presidential election, it looks like the event will be anything but smooth – as many had expected. There are still legal efforts being pursued to wrest back the electoral votes, but it looks like there is little-to-no path for President Trump to alter the outcome. The market seems to be moving on as if the event is settled, but there are still a few months before Biden is officially inaugurated in uncertainty can be sowed.

As the post-elections influence turns more abstract and less urgent, it is a perfect opening for the kind of headline we were met with a few hours before the official US open. Pharmaceutical giant Pfizer and partner BioNTech SE reported after large scale clinical tests of their experimental coronavirus vaccine that it was more than 90 percent effective and had no serious safety concern. PFE posted a record gap higher and it dragged the S&P 500 Pharma ETF up as well. It is aiming for regulatory approval for emergency use as early as December and mass rollout in 2021. 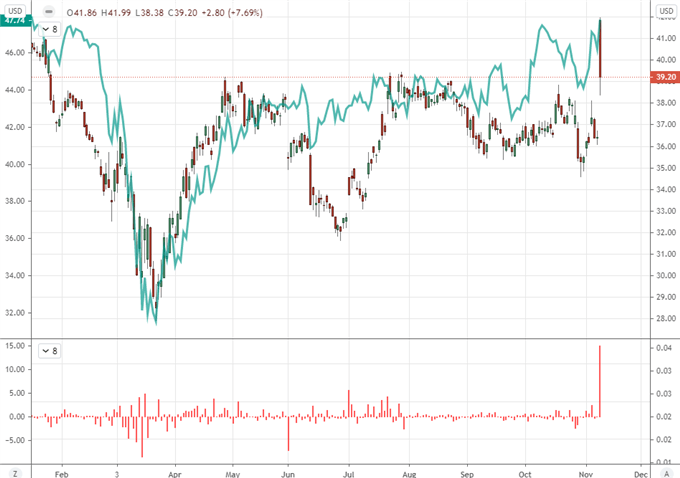 The hope of an answer to the global pandemic without having to resort to an economically-compromising national shutdown is an understandable boon to bulls already heavily invested with exposure. What’s more, in the US where cases of coronavirus infection have passed 10 million and a follow up to the expired CARES act fiscal stimulus is still unclear, this can be seen as good news at a critical juncture. Yet, that timing is not as ideal as Monday’s volatility may suggest. The mass release of a vaccine is still seen into 2021. That leaves a lot of time and risk that the US healthcare system could be overrun on a continued pace of outbreak. It is worth remembering there have been a number of false dawns in breakthroughs on this pandemic in the past months – with news from AstraZeneca, Moderna and Gilead in reverse chronological order – and each has seen its market potential fade. Is this time different? 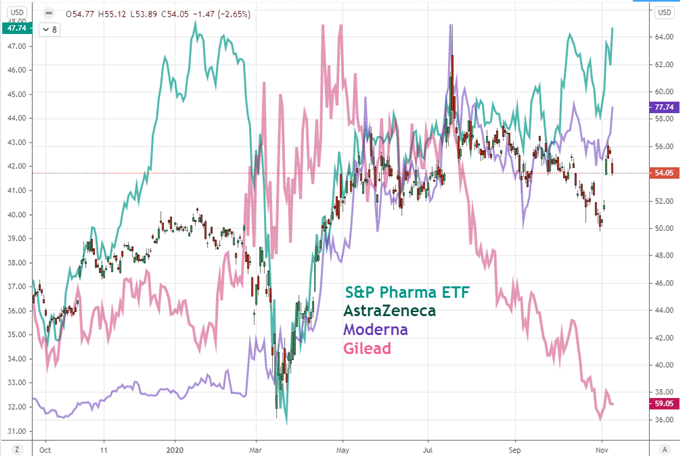 A Technical View of Risk Trends

I believe there is a strong case for a collective ‘relief rally’ for the markets if properly motivated. Seeing some stability in the future of the US government post elections and the promise of a vaccine are two solid cues for pent up bullish interests. Yet, the transition to a full-blown bullish trend will likely require a steady tap of renewed confidence. In the meantime, there was some uneven performance in risk trends. From the S&P 500, a strong gap higher on the open didn’t come with a clearance of the previous swing high around 3,600. The tech-heavy Nasdaq 100 – but many measures the tip of speculative appetite these past years – actually closed lower. Emerging markets (EEM), junk bonds and some other standard outperformers struggled somewhat. Meanwhile, crude oil (growth related), European indices (already shutdown) and some EM-Dollar pairs (such as USDMXN) leaned towards risk appetite. 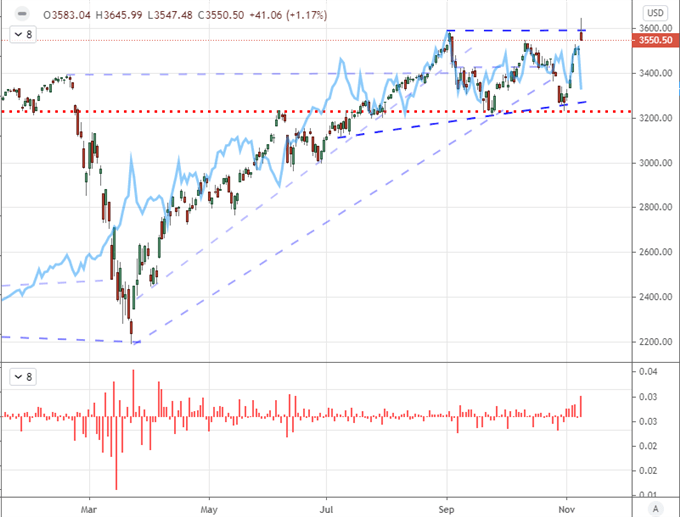 One of the more impressive technical moves was the uniform rally in Yen-based carry pairs this past session. From traditional pairings like AUDJPY and NZDJPY to historically under-yielding pairs like EURJPY and CHFJPY climbed. USDJPY stood out for its abrupt rally after weeks of refusing to partake in sentiment swings, but that 105.50 resistance is still notably standing overhead. 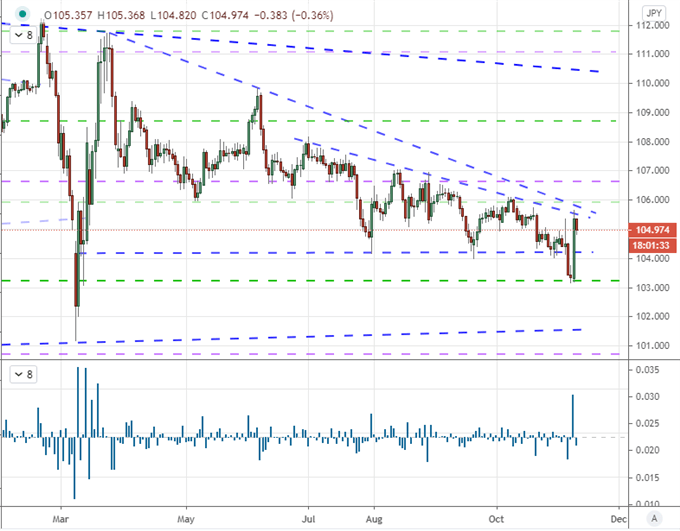 The Dollar Has to Sort Out Its Priorities

In referencing USDJPY, we are gauging conflicting fundamental themes. There is dispute over economic positioning, trade stance and general safe haven appeal. Depending on what is going on, there can be a wash of issues or a convergence. This isn’t the only pair that can factor in these matters. Looking to USDMXN again this past session, an uneven Dollar response to the elections news and questions over the fiscal stimulus availability at the very lists allows the higher yielding Mexican Peso to take advantage of the risk appetite charge. I’ll be watching this pair closely. 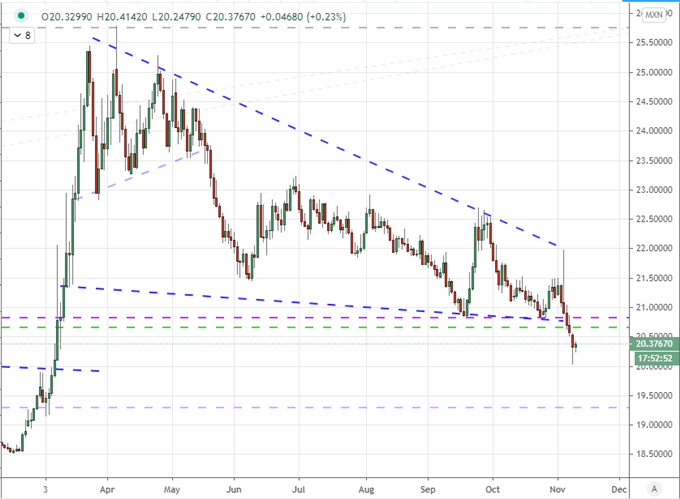 Another pair of honorable mention is EURCHF. The biggest single-day rally since August 2017 indicates a remarkable pressure that could naturally lead to expectations of intervention by the Swiss central bank. However, this could also be kismet for the burdened policy makers as a side effect of risk appetite that would see the Franc naturally deflate and a noteworthy imbalance between EURUSD and USDCHF performance. Don’t underestimate the impact that liquidity can have down the line. 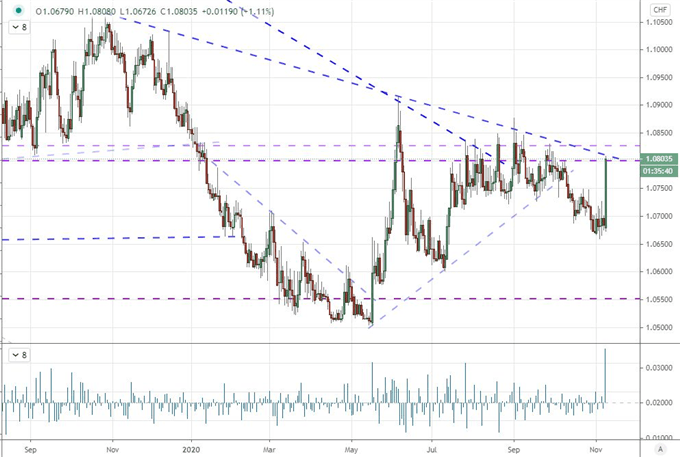