We are heading into a second week of turbulence caused by the US Presidential election. This high profile event risk has actively curbed market intent for weeks leading up the November 3rd polling, but the aftermath is proving different animal. While the future is still up in the air for the US government, there is a more substantial volatility in the financial system and an unexpected charge in speculative appetite that may face an inevitable reckoning. Heading into the weekend, the tally between incumbent Donald Trump and challenger Joe Biden was remarkably close in Nevada, Pennsylvania, Georgia and Arizona with the 270 electoral votes on the line. In betting markets, the expectations for Biden roping in the enough votes to win the election had tipped the scales for the final 48 hours of active trade; but the jury on the actual tally was still out. Will this be resolved over the weekend, early next week or perhaps later into the future? What will a resolution or wait do to risk trends? 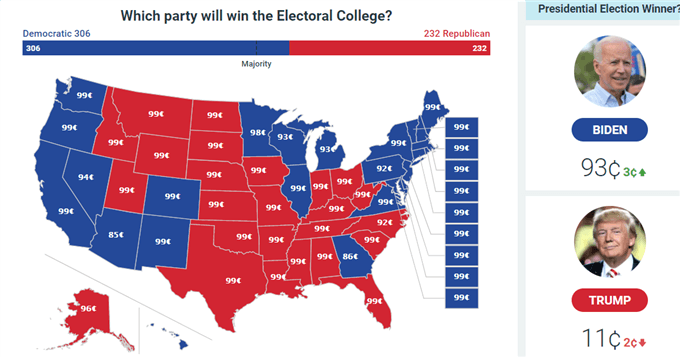 Amid the speculative wash around the key event, risk trends have still put in for a remarkable charge higher. Many of the of speculative measures I follow for signal on trader intent managed a climb this past week, but at the top of the performance charts was the tech-heavy Nasdaq 100. The index posted its best week’s rally (on a percentage basis) since the week of April 6th. Before that slightly larger surge – 9.44 versus 9.39 percent rally – there isn’t anything comparable from this measure until March 2009. Both comparisons are profoundly different environments to what we have just wrapped. In April, the markets were establishing a recovery from the sharpest downturn in market and economy in modern record. Back in 2009, the bulls were starting to wake from hibernation after a long, drawn out rout. This rally formed just off record highs and spurred on by a as-yet unresolved fundamental event. How reliable therefore is the foundation? 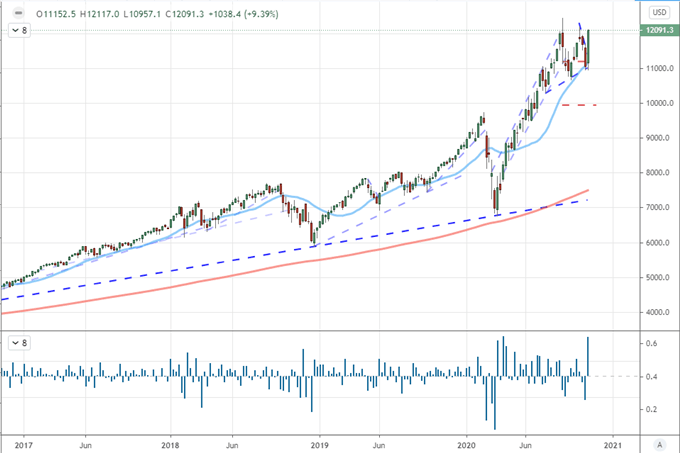 Those that are active in the market long enough eventually come across the trading adage of ‘buy the rumor, sell the news’. I believe this logic is current among the speculative crowd. Heading into the election, I conducted a poll asking traders in social media what they expected from the election in dimensions of who would win and what the market (S&P 500) would do in turn. The Trump/Biden expectation was generally split, but the expectation of a bullish turn for the market under either victor was over 75 percent. Perhaps this is a more universal belief in a forward looking market. As such, though the outcome is still unclear, expectations may solidify and market participants look for an advantage to move early. If that is the case, it may be difficult to keep building upon this path with genuine enthusiasm. Perhaps if there is promise of a smooth transition or an additional factor like a direct path to stimulus the route to a record high and beyond can be found. 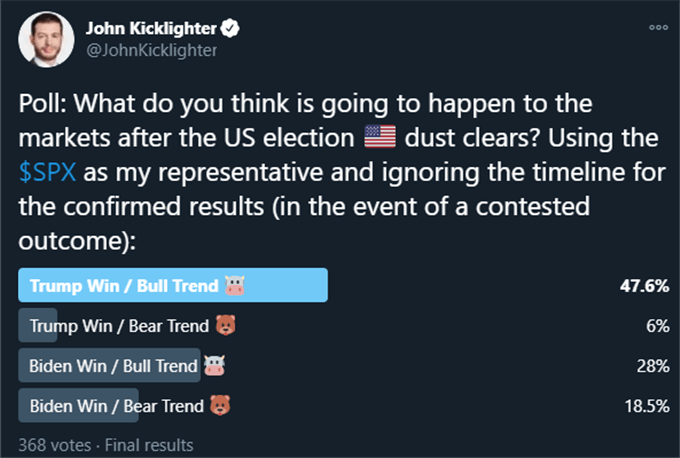 Uncertainty around such a profound event is likely to maintain a turbulent level of volatility while also undercutting conviction in different assets. There are a range of scenarios that can play out, but many of the benchmarks don’t find a particularly convincing course through the most probable of these paths. Yet, that doesn’t mean all assets are so put upon. Where global indices, carry trade, commodities and junk bonds struggled this past week, emerging market measures seemed to climb right along with the S&P 500. EEM charged to a multi-year high as the more stimulus seemed likely for the world’s largest economy at the same time a trade relations thaw (particularly for direct neighbors) looked more likely. This makes USDMXN more interesting – particularly with the Central Bank of Mexico on tap – for an expected 25bp hike – this week.

Chart of USDMXN with 20 and 200-Day Moving Average (Daily) 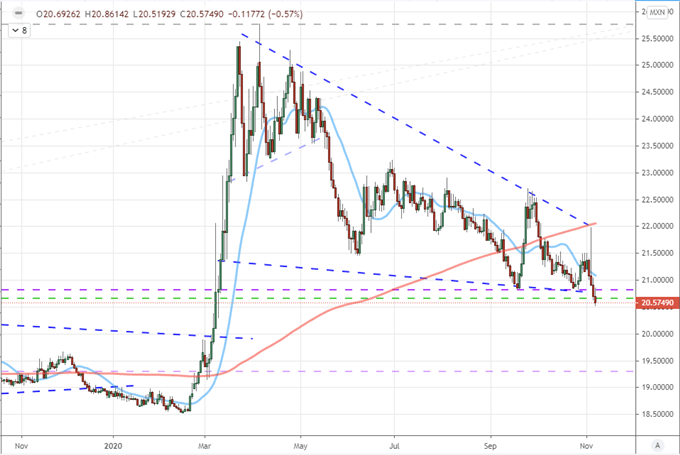 Another emerging market benchmark with unique fundamental layers that can make it appealing is USDCNH. This cross has dove from 7.20 down through 6.60 over the past 5 months. The past week alone was the largest tumble over that period since the beginning of 2017 and the second weightiest bear move in the offshore Yuan’s relatively brief history. While the Dollar’s general retreat and some sense of a China’s economic recovery are likely factoring in here, it likely that some official design is at play here projecting a sense of stability and strength to the world’s market by Chinese officials.

Chart of USDCNH with 1-Week Rate of Change (Weekly) 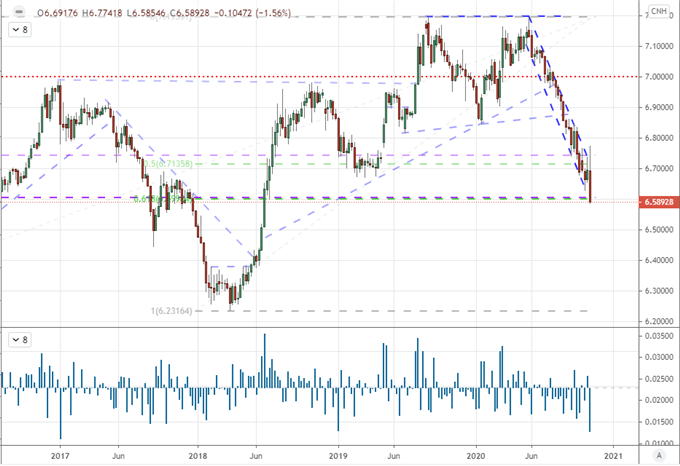 Among the Majors with Heavy and Light Event Risk on Tap

In terms of scheduled event risk ahead, GBPUSD may be the most pregnant with potential. The US Dollar’s considerations (elections, sentiment surveys) aside, the Sterling is facing 3Q GDP and a range of key September data. Less distinct is the ongoing post-Brexit trade talks with the EU. While heavy with fundamental potential, I believe this is likely to promote more volatility than intent in a trending way. 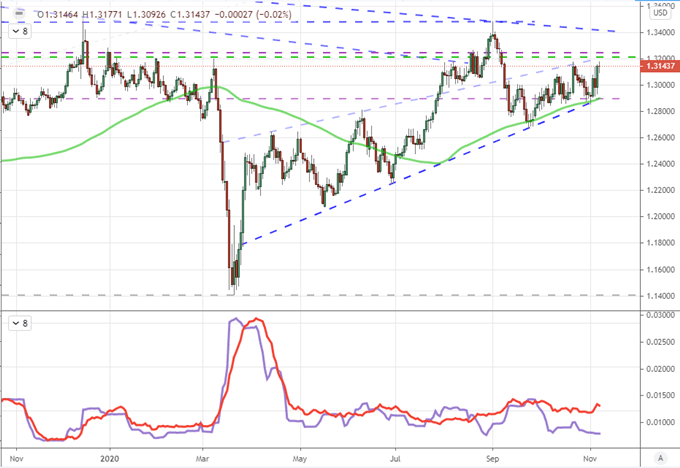 Another cross that has been less frequent in my analysis, but is of interest is USDCAD. We ended this past week with dueling employment reports. The US NFPs for November beat expectations (638,000 versus 600,000 forecast) while the Canadian jobs report (83,600 versus 100,00 forecast) fell short. That didn’t foster a bullish reversal from this cross at meaningful range support. An unusual pair prone to enormous periods of extreme movement interspersed with long bouts of quiet, the possibility of a more friendly trade environment for the neighbors would likely benefit the Loonie far more. 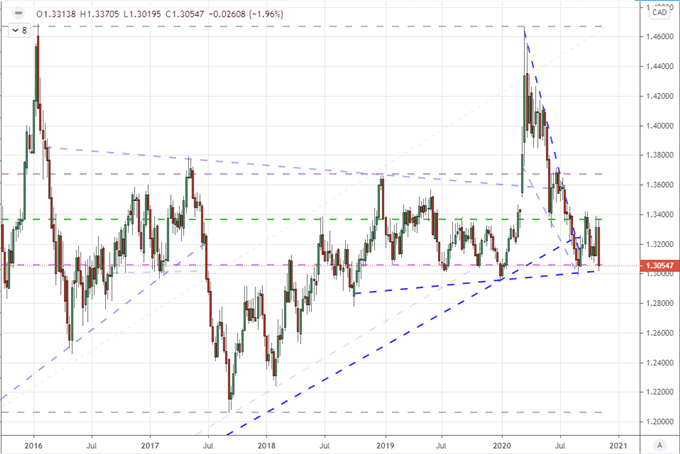 A Risk Asset, Safe Haven and Alternative to Financial Standards

Finally, one of the most impressive performances through this past week was from one of the least formal of the markets. Bitcoin posted a charge through 14,000 this past week and a particularly acute single-day rally just after the election wrapped without a clear winner. There is a little bit of charge here perhaps as a safe haven, anti-Dollar and perhaps as a counterpoint to traditional fiat in general. However, I believe this is just as readily a reflection of the risk appetite bolstering the S&P 500. What is motivating this lift is important if you are trying to gauge whether it continues or stalls before we can return to the record high just shy of 20,000 set back at the end of 2017. 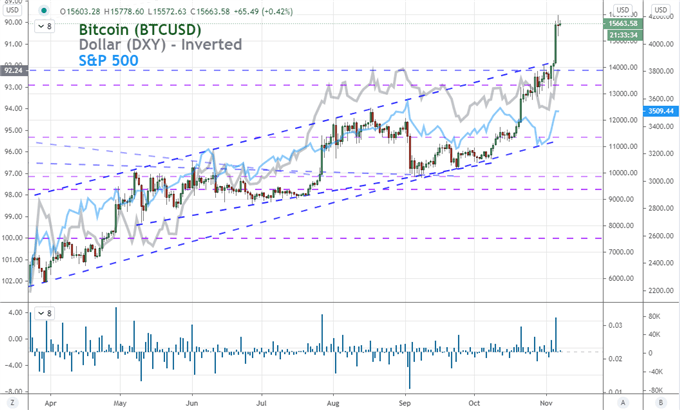