Risk Trends Face Volatility But May Struggle for Trend Ahead

With the economic outlook pulled between growing pandemic risks and latent hopes for stimulus, volatility is an ever-present feature of the immediate trading landscape. Yet, even if one of these matters takes the reins, the sheer anticipation of the US Presidential election on November 3rd is more than capable of curbing conviction from establishing a full trend whether the asset in question is a reflection of US markets or a global measure of ‘risk’. This interim period may be particular difficult to navigate with bouts of event-driven volatility that don’t catch fire as technical patterns may intimate. That said, nothing is impossible. With so many critical themes so easily provoked, it is possible a speculative urgency overrides complacency born from anticipation. Yet, for a benchmark such as the S&P 500 that has seen persistent bullish pressure since the post-Pandemic slump – and over the past decade – the potential to trigger a landslide in risk aversion looks to be a more loaded scenario. 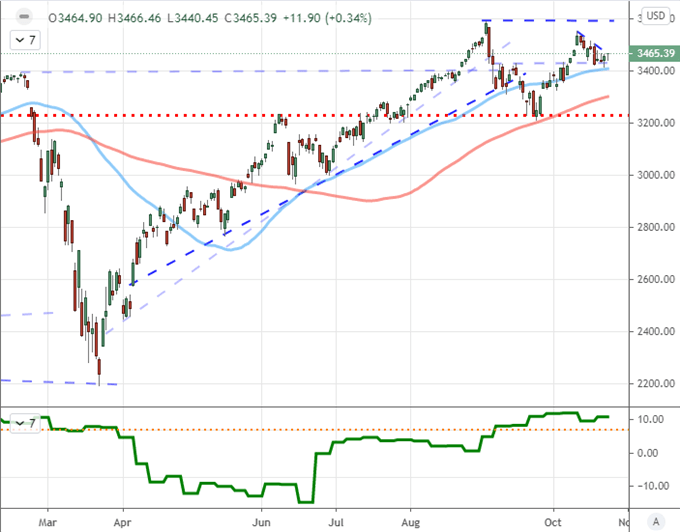 In accounting for the top fundamental themes that are either frequent background developments or otherwise threatened by scheduled event risk, there are few matters that look to have a practical scope to override anticipation with a broad trend supporting risk appetite. This is not to mean that matters like the resurgence of the coronavirus or economic forecast can’t experience a sudden and overwhelming upgrade in forecast – such as a vaccine announcement or windfall growth – but they are improbable given the circumstances. One area that I maintain as a potent matter that can reasonably face a sudden upgrade is stimulus. The nature of large external infusions make capable volatility triggers for the bulls. White House Chief of Staff Mark Meadows said Friday that he believed a long awaited follow up to the expired CARES act could come in ‘a day or two’. Naturally, the market treated the remarks with skepticism; but an eventual deal is probable. The question is whether it is already priced into the market. 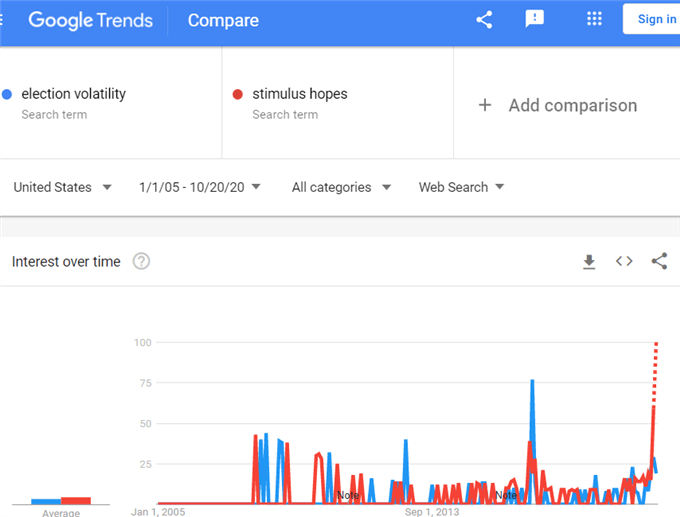 Graph and Data from Google Trends

Anticipation of external support is a ready catalyst for the S&P 500 but bullish traction may struggling owing to a general lack of undervalued enthusiasm. Though the majority of people in my poll felt the S&P 500 was the most exposed to volatility on a stimulus breakthrough, I believe the Dollar holds that title given it is trading near multi-year lows as counterparts that have been helped along by their own stimulus programs have appreciated in the absence. Regardless, I will be watching for headlines on US stimulus this week. 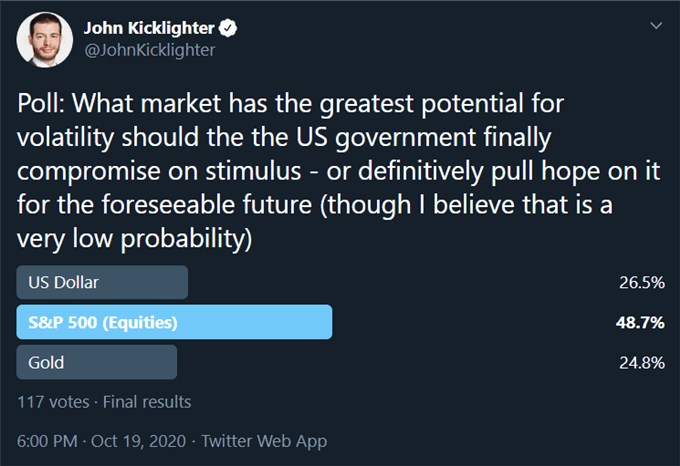 The Fundamental Weight Overlapping on the EURUSD

While many traders will be monitoring flare ups in volatility where they occur or when it occurs in a market they follow regularly, it seems that there is greater potential for EURUSD in particular given its convergence of so many systemic themes and event risk. The US and Eurozone 3Q GDP releases, coronavirus case count along with economic response and political pressure present a serious backdrop for market activity through ‘relative’ means. Overall, it is worth noting that net speculative futures positioning is rounding off a record high while European officials have lamented the ‘high level’ of the Euro despite its relatively low historical position. There is a lot of potential packed into this FX benchmark pair. 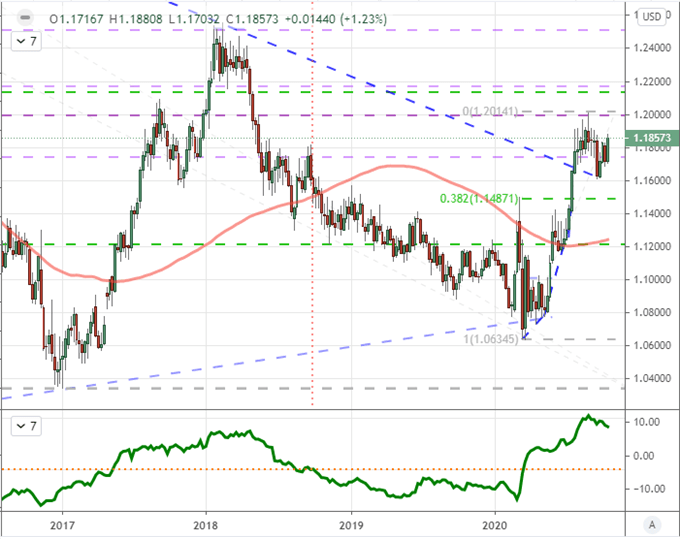 Relative stimulus is a theme that seems a probable volatility risk but it doesn’t come with the convenience of a distinct timeline. The same is true for resurgence of the pandemic. The spread of the virus can prove an overall driver for risk trends that capsizes speculative markets – a bullish spark is possible but improbable with a sudden alleviation of the burden. However, market influence is capable well before we reach that extreme should the new cases count rise in one country/region while it is seen as relatively more under control in another. Alternatively, from an amoral market, the steps for economic shuttering by government or market can produce a more measurable contrast for a pair like EURUSD. 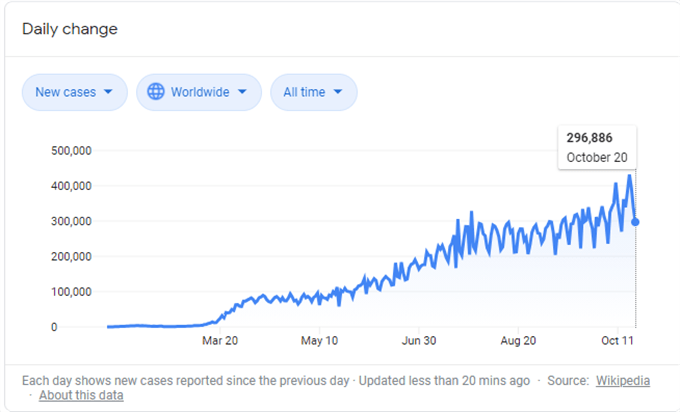 Top Fundamental Themes with a Timeline

We are traversing ‘no man’s land’ over the coming week when it comes to the US election risks. The actual election is scheduled for the Tuesday after next, which means the market is unlikely to cast conviction on the outcome this event would suggest until after the event passes. That doesn’t mean that it won’t impact the markets through shifting tides of speculation in the interim however. Unexpected headlines and polls will be the fodder for market movement on this front for the time being.

Read more on how the Dollar traded around previous US Presidential elections in our special report analyzing the benchmark currency during this cycle. 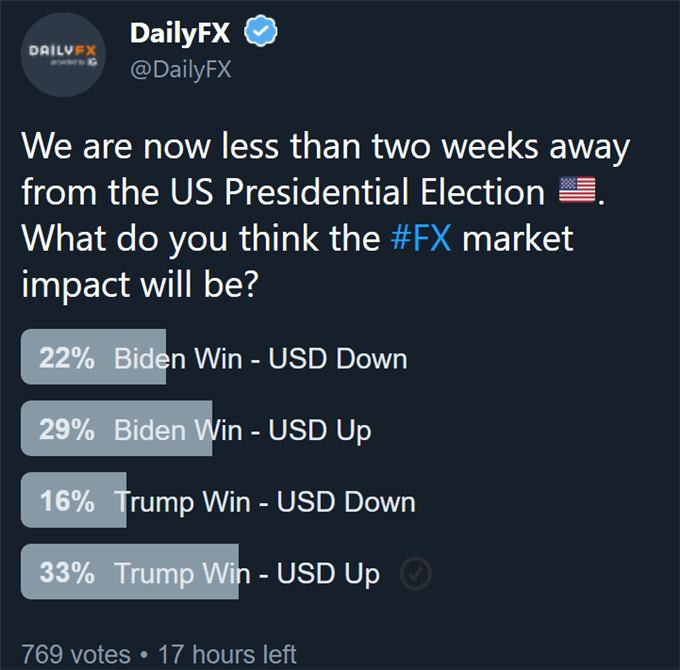 For high profile scheduled event risk with an acute volatility potential, the third quarter GDP releases due will certainly draw considerable attention. South Korea’s own update will start the week with a litmus test for Asia. Europe (Eurozone, Germany, Italy, France) will close the week with Friday stats. However, the most pressing update will be Thursday’s US 3Q GDP reading. Ultimately, I put more personal emphasis on timely data that has shown October bearings with more recent coronavirus influence, but the market conversation on the election will amplify this official reading. 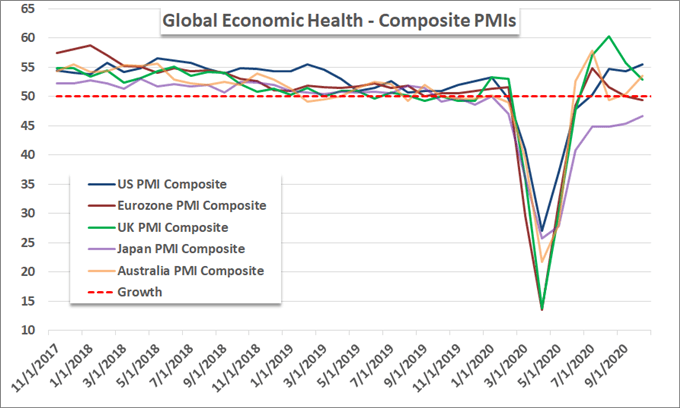 One other outlet of particular prominence that I will watch is the relative stimulus discussion with a time stamp on it through the ECB and BOJ rate decisions. Both are well-known doves that have pushed their efforts to the extremes of standard policy. Indeed, they have moved the boundary on the unorthodox that these groups are willing to attempt in order to promote financial stability, growth and perhaps even currency depreciation (unofficially). Yet with fiscal efforts taking a bigger role in the next phase, what is the risk that monetary policy efforts put into place over the past decade steadily erodes and is eventually deemed incapable of keeping markets afloat? 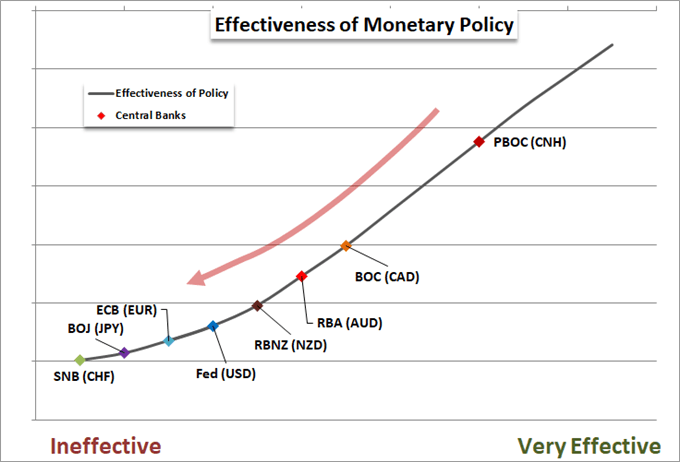