USDJPY May Be the Best Candidate for Stimulus, Traders Fade GBPUSD Rally

Risk Assets Were So Sidetracked Even Earnings Bolstered Favorites Floundered

Speculative appetite was tuned this past session to pursue a low-boundary charge between a short-term technical rebound that could draw on some of the capital market’s favorite benchmarks. Following the disappointment of Netflix the day before, this past session was loaded with a bullish headliner in carmaker Tesla post earnings. Afterhours Wednesday, the car manufacturer – one of the favorite among retail traders who follow the current in speculative appetite – reported a record quarterly profit, the fifth consecutive above line, on revenue of $8.77 billion. If that put bulls in a favorable mood, the announcement of a $5 billion share buyback by railroad shipping company CSX would have played another favorite speculative hit. And yet, both the S&P 500 and TSLA struggled to gain traction. It seems anticipation rooted in US stimulus negotiations and the November 3rd Presidential election curbs enthusiasm both ways. 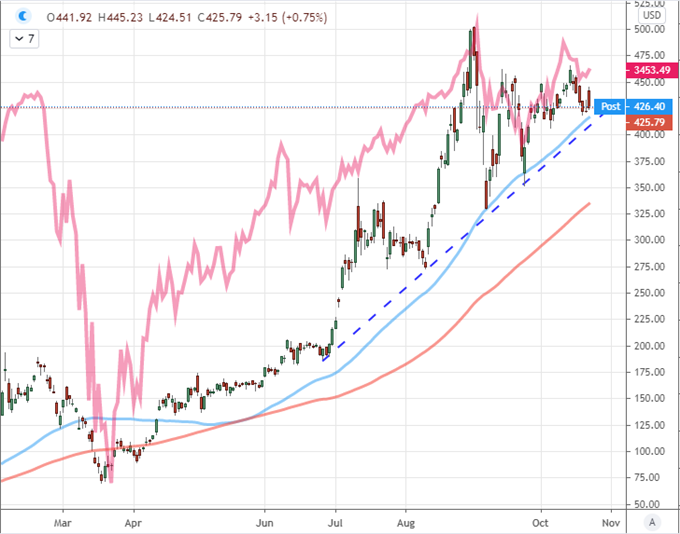 As for the constant discussion around the possibility of a follow up US stimulus to supplement the CARES act that expired back in the end of July, the government failed to come to a compromise yet again this past session. The market doesn’t seem to be particularly surprised, but can it keep this steady bullish premium in an eventual second wave? Headlines this past session found House Speaker Nancy Pelosi offering up language that further bolstered headway, making it seem they were on the cusp of an agreement. White House Chief of Staff Meadows suggested the discussion was around a $1.8 trillion and the President had the sway to convince the Republicans in the Senate to bring an agreement. If he cannot, the rift it would reflect this close to the election could cause significant problems in itself. I maintain that the Dollar is the better candidate for a stimulus breakthrough, but the voters in my poll believe the S&P 500 (risk) is better positioned. 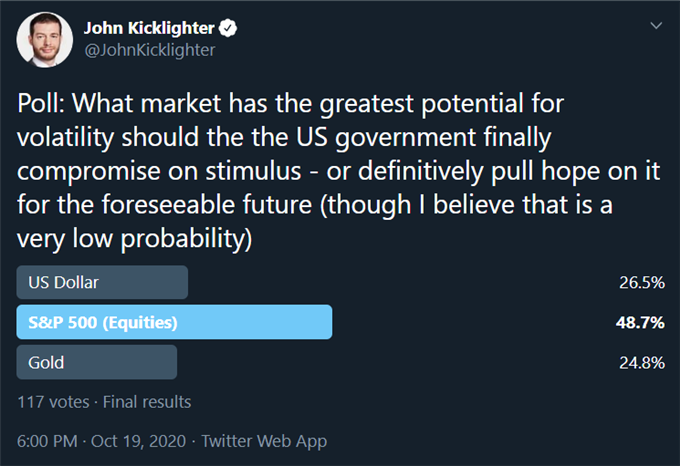 Ultimately, a follow up stimulus program seems the prevailing probability. To refuse support for a fading economic recovery would be a serious risk for any political party, so dragging out a compromise may be a default strategy; however, the ultimate infusion to offset a second (or third) wave of the pandemic seems practical. That is perhaps why benchmarks like the S&P 500 have held up well. Yet, these measures already stretched to the upside are not particularly low-boundary as far as ‘dip buying’ mentality goes. Instead, the Dollar looks to be a better candidate. And, if there is a ‘risk on’ and Greenback combo to respond to such an outcome, USDJPY may be the most appropriate fundamental candidates – and one with better technical bearing.

Chart of USDJPY with 50 and 100-Day Moving Averages (Daily) 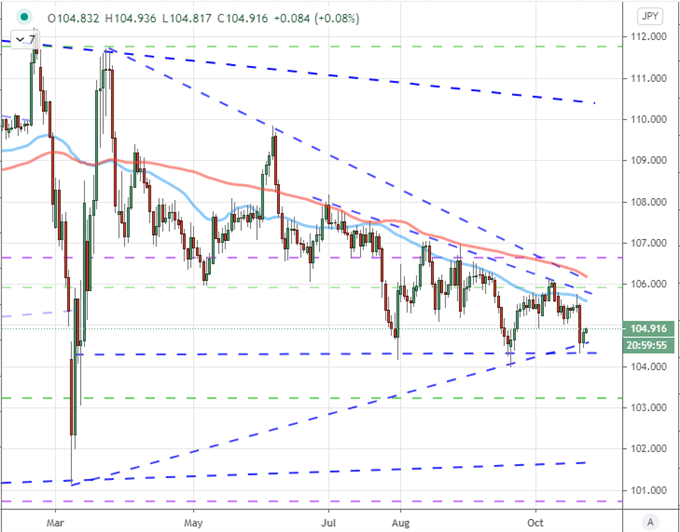 It is very likely that the US Presidential election a week-and-a-half away is drawing investors’ attention forward – both in the US and globally. Though this is rather a discreet event, it carries worldwide implications with issues like a global recession, trade wars, etc. That is perhaps showing through in high correlation in global risk assets, even when that relationship is one that sees the markets unwilling to extend a clear trend. The last Presidential debate wrapped a more focused argument – perhaps thanks to a muting function – but will this tip the scales in polls and investor circles? According to my poll on the matter, 61 percent believed the debate wouldn’t result in Friday morning volatility for the New York session; yet it is worth being cautious when navigating the final session of the trading week. 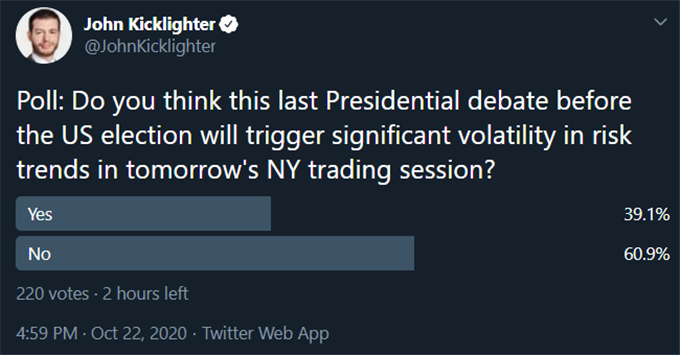 In more tracked fundamental course, we may find the more traditional drive in economic activity an effective focal point of attention – if not market movement. The global October PMIs are crossing the wires and fundamental observers should pay close attention. It is very possible that next week’s government 3Q GDP updates (US, Eurozone, Germany, etc) draw more headlines given its ubiquity; but the pressure seen in the coronavirus resurgence and warnings for the future have developed more explicitly over the past weeks. That makes the October observation more weighty than the ‘official’ reports. That said, markets have the final vote on what drives price. 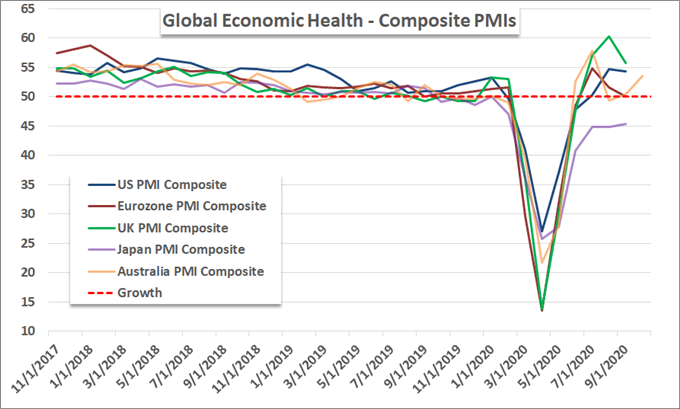 Through the final day of trade this week and beyond, the US Dollar remains a critical market to monitor. The benchmark currency is trading at multi-year lows, is focal point in political uncertainties, economic updates next week and the argument for safe haven status. As far as scenarios go through the final trading day this week, either a compromise on US stimulus or a surprise response to the political situation post-debate would establish the Greenback as the most willing medium for volatility.

Read more on how the Dollar traded around previous US Presidential elections in our special report analyzing the benchmark currency during this cycle. 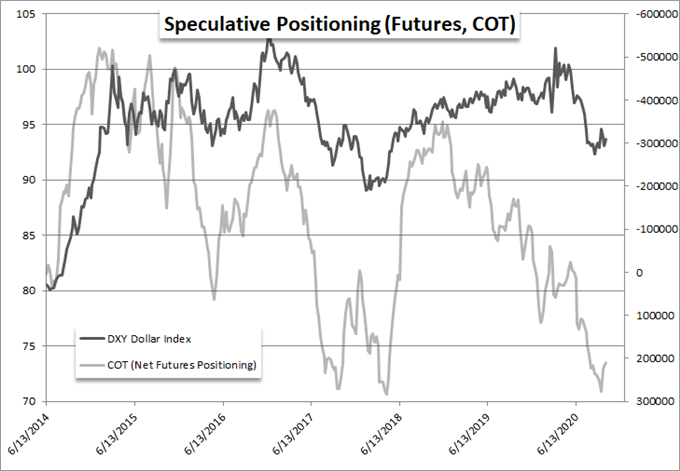 Further honing into the Dollar’s world, we cannot ignore the influence of speculative appetite. While we may find that markets are tamed by the expectation of heavy waves around the election at the beginning of November, that doesn’t mean that volatility will be reserved – far from it. Remarkably, a sharp jump from Cable (GBPUSD) this past session in response to expectations around a trade negotiations compromise seems to have drawn out the skeptics when it comes to transition from range to trend. Retail speculative position measured by the IGCS showed a surge in short positioning leaning against an active market development. 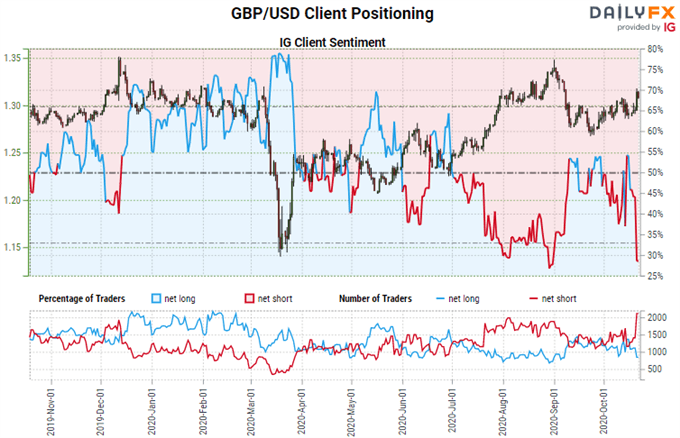 Chart from DailyFX with Data from IG