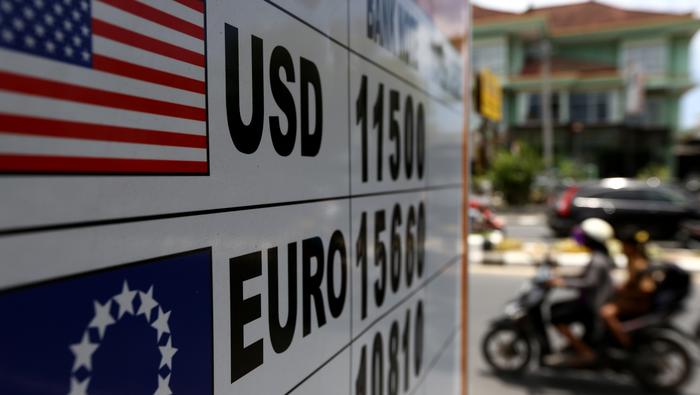 This week opened to an extraordinary swell in risk-leaning assets with benchmarks like the US indices charging towards record highs between a sharp bullish gap and subsequent follow through. Yet, with a record high in easy reach for the likes of the S&P 500, the drive seemed to falter. This past session, ‘risk appetite’ risk appetite faltered from US indices to emerging markets to carry trade. For traders with a baseline view bullish or bearish on sentiment trends, it is a comfort to discern a reasoning for a move against assumptions. It wasn’t difficult to suss out a bullish attachment to expectations for fiscal stimulus sometime in the foreseeable future while the bearish swoon was neatly attached to the pause in the Johnson & Johnson Covid-19 vaccine trial owing to an unexplained illness as a possible side effect. Are these really the engine behind shifting market confidence or simply a convenient justification for those unwilling to entertain a more ambiguous backdrop whereby markets really aren’t committed to a bearing nor a prime driver? 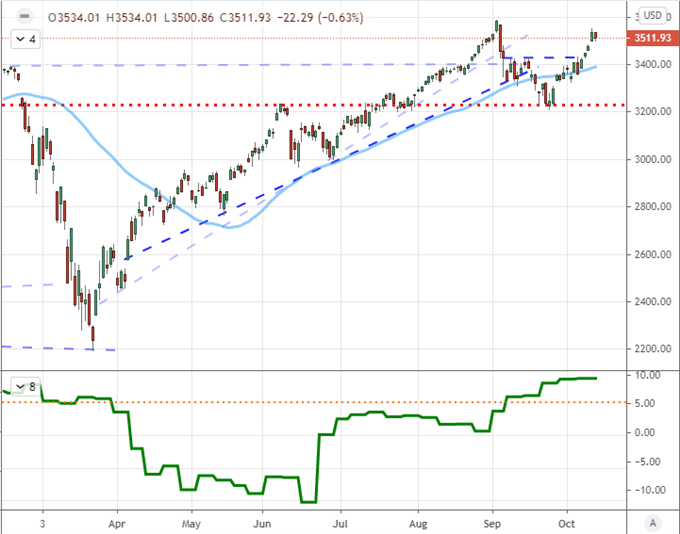 I am of the mind that there isn’t a firm footing behind risk appetite – whether bullish or bearish. Trends are proving unproductive particularly when correlation is evaluated. Further, neither breaks nor reversals seem to inspire nascent interest to crush in on supposed opportunities. This is more often the habit of a market that is uncommitted in trend but suffering from unbridled volatility. There is a range of systemic risk that can be entertained in these markets from vaccines to stimulus potential to trade war fodder to V-shaped recovery risks among other issues. With such a kaleidoscope backdrop, the frequent shift in priority and sometimes abrupt instances of volatility seem to fit. In this kind of environment, retail traders’ natural inclination to fight prevailing trends tends to better fit the mold – as opposed to seeking momentum that struggles to gain traction. Retail CFD trading as measured by IG is steadily building a bias towards a heavy short position on the S&P 500. 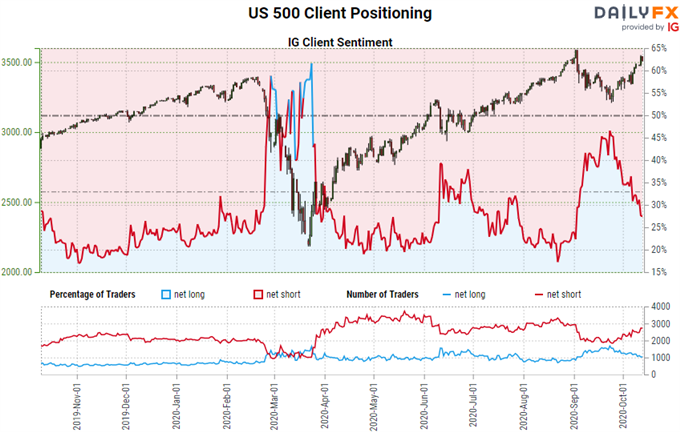 Taking a closer look at the habits of pure speculative interests, I would note that the S&P 500 as a benchmark for traders’ interests is outpacing many global counterparts – few counterparts can claim to be just on the cusp of their own record high. Yet, even within US equities, there is a notable concentration in performance for tech shares. With the Apple event and Amazon Prime shopping ‘holiday’, there is a basis in drive yesterday and today. Both consumer events will be an interesting signal for consumer health in this period of pandemic-led economic uncertainty, but in the meantime, it has charged the Nasdaq 100’s performance even relative to the SPX. The ratio between the two has surged and loiters just off a record high. This registers as an impulsive bid for momentum rather than ‘value’. Keep close tabs on the performance of this concentrated benchmark. 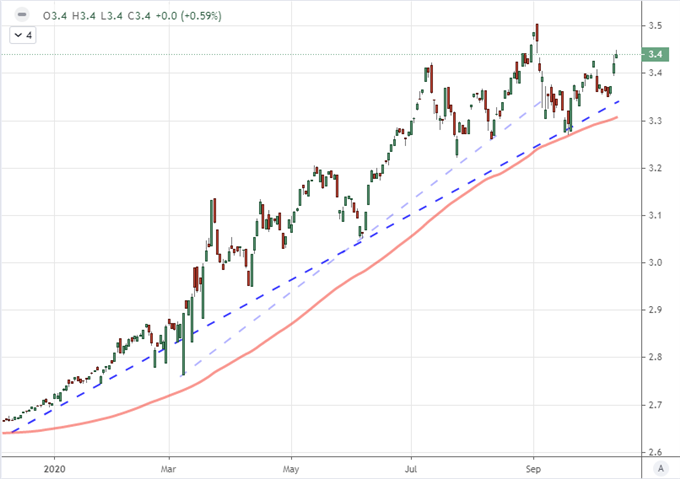 What Fundamental Themes Should Lead Our Expectations

In the ultimate results from my poll last week, the number one market-moving potential theme this week is the ongoing negotiations for a US fiscal stimulus. Indeed, the anticipation for what could be on government support carried the market’s imagination through the very start of the week. However, the likelihood of a compromise seems still fairly low given the political stratagems perceived from both sides of the aisle and the White House. That will draw this situation out with little satisfaction for a definitive approval or delay. Meanwhile, the contrast of a definitive growth forecast from the IMF seems to draw limited affect – whether from the upgraded 2020 forecast or the warning of the recovery’s fragility.

Twitter Poll on Most Market Moving Theme Next Week 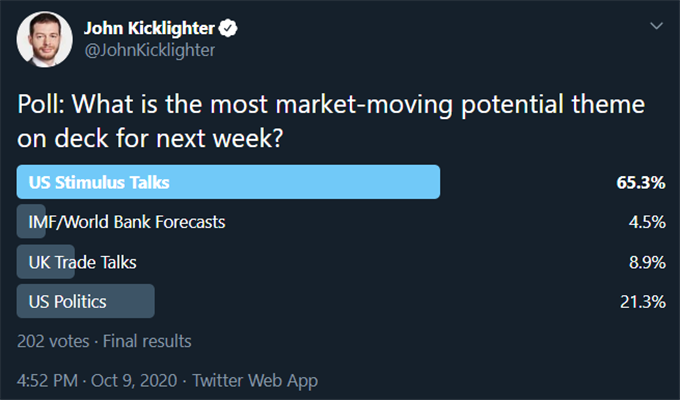 On the systemic fundamental side, the IMF’s WEO (World Economic Outlook) update offered a tangible upgrade to the – admittedly still-steep recession – global forecast for 2020 from -4.9 to -4.4 percent. However the 0.2 percent point downgrade to the 2021 forecast and stark warning against the robustness of the recovery and financial market stability would urge critical thinking. Meanwhile, the potential for stimulus offers soothing ambiguity. In the US, search interest in ‘stimulus hope’ outpaced its peak in April when the government was actually drafting the CARES act in response to the pandemic. 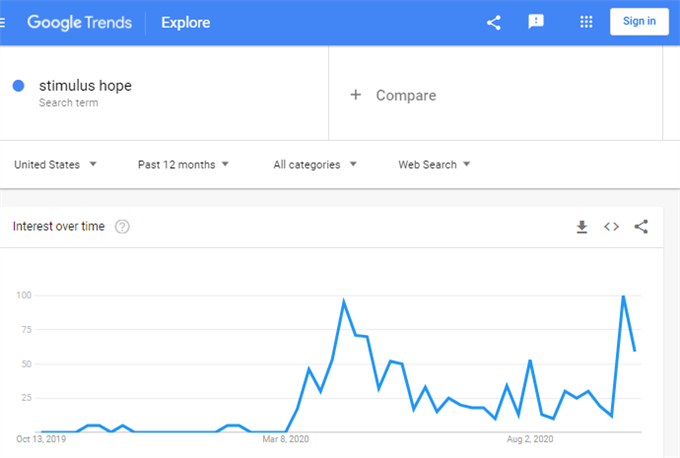 If I am to believe that stimulus is indeed such a critical market-moving potential moving forward, it is worth assessing where its potency is greatest. I am dubious the US indices are a well of untapped bounty. Just off of record highs with a ‘premium’ to other categories of risk assets and against a questionable economic backdrop, it would seem that there is some measure of saturation in risk appetite. If stimulus does eventually find the write off of the US government it seems there is more discount to work off with the Dollar than there is the Dow. Meanwhile, EURUSD – the world’s most liquid currency cross – will also have trade wars considerations to factor in.

The upcoming Presidential election can materially exacerbate trade wars already eroding growth.Read this article to see analysis on the expected impact of the election outcome on trade. 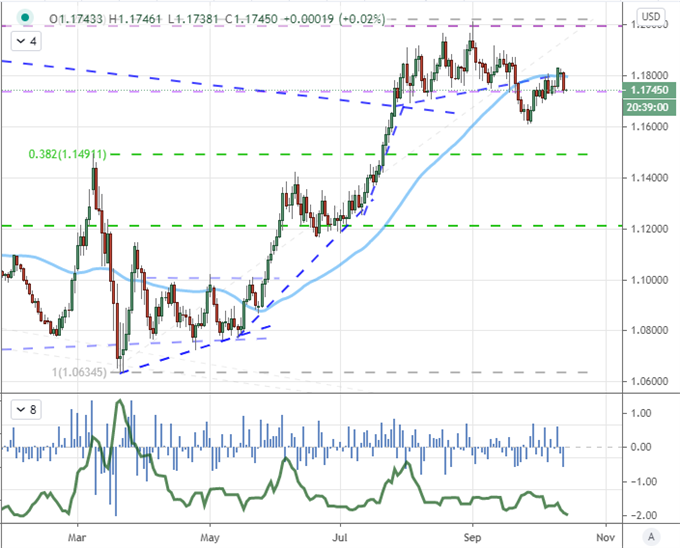 As of this past session, the WTO announced that European authorities could pursue $4 billion in damages against the United States for illegal subsidies to Boeing. It is worth noting that this group gave the US the green light to seek restitution of up to $7.5 billion against Europe for Airbus support. Given the enthusiasm for which the US pursued the import taxes, it is unlikely that Europe takes ‘the high road’. Meanwhile trade will also take on a new risk in unresolved digital taxes while the US-China trade war continues to wear on. If anything this relationship is unlikely to go back to ‘normal’ regardless of the next administration. China recognizes this and seems to be making a valiant effort to shift dependency to domestic sources. Is the market confident they will get there? 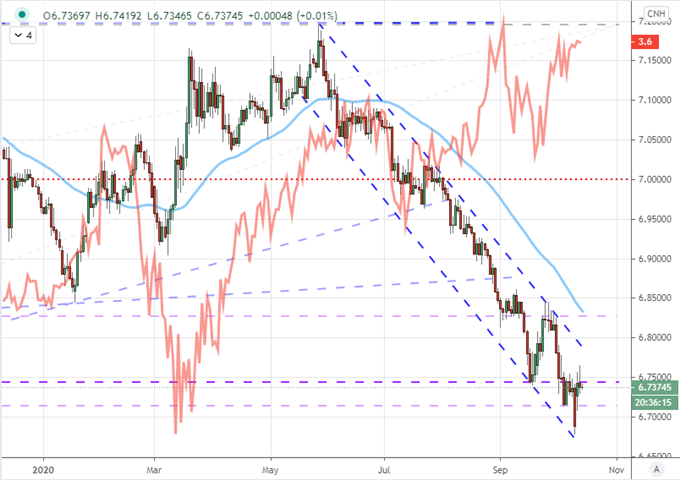