S&P 500 and Risk Appetite Drift Higher But What Carries a True Bull Trend?

It is hard to close out this past week without a technical appreciation of the general risk appetite to our backs. From the S&P 500 – one of the most representative benchmarks for traded derivatives – a confirmed fifth consecutive bullish opening gap would secure lean into a prevailing trend. If there was any skepticism to arise from that series, the clearance of a month-long range resistance (at 3,430) would go a long way to erode the skepticism. That progress addressed, there remains a serious fundamental gap to the technical charge. Where is the enthusiasm originating? Is there an groundswell in economic activity, rates of return or some other speculative outlet? That seems particularly impractical in recent conditions. So while the SPX and Dow have earned five consecutive bullish daily opening gaps, the actual progress from the series serious lacks speculative and fundamental weight. Such recognition doesn’t preclude further lift, but it can certainly shift the probability/potential spectrum moving forward. 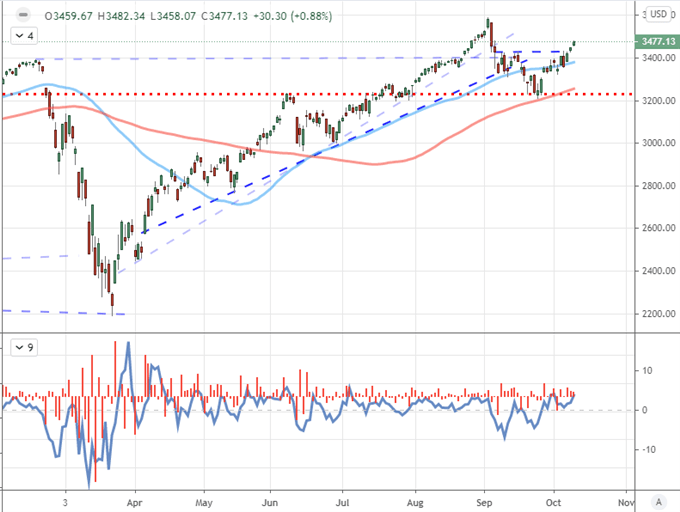 With market movement on the mind from a fundamental perspective, I asked social media (‘Fintwit’) what participants believed the most loaded theme/event was heading in his next week. By a large margin, early voting ‘favored’ the potency in US stimulus talks. This past week, the discussions between the GOP-led Senate and Democrat-fronted House proved particularly unproductive as negotiations seemed to present a wider disparity rather than a move towards compromise. Through the end of the week, it was remarkable to see headlines attach new indices highs to optimism on stimulus terms while Mitch McConnell made clear that he was no closer to agreeing to terms. If this is a source of bullish interest, traders beware the impact of reality. And extrapolating from my poll, it seems there is a lot of weight built into this assumption.

Twitter Poll on Most Market Moving Theme Next Week 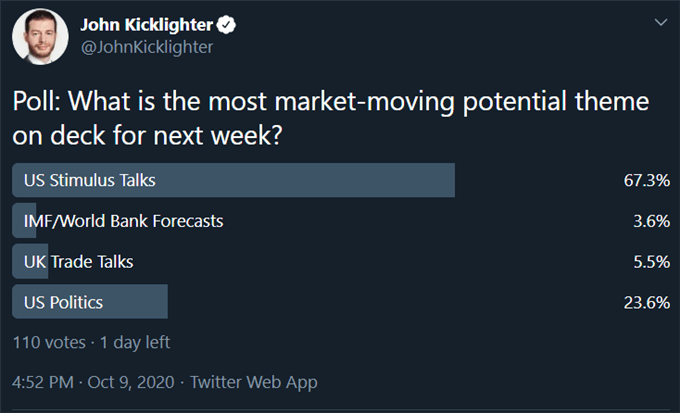 Stimulus can impact both ways. If there is an ultimate fulfillment of an expected infusion of external government support into the world’s largest economy, the risk spectrum will shift materially. Then again, if the outside financial prop never comes, there is good reason to believe that the disappointment can result in a significant speculative adjustment. According to my own poll, the speculative rank doesn’t expect a compromise before the election, yet a charge on record highs inherently assumes such an outcome is at least a possibility. At what point does an unfulfilled backdrop starts to cut down speculative appetite?

Twitter Poll on Timing of Next US Fiscal Stimulus 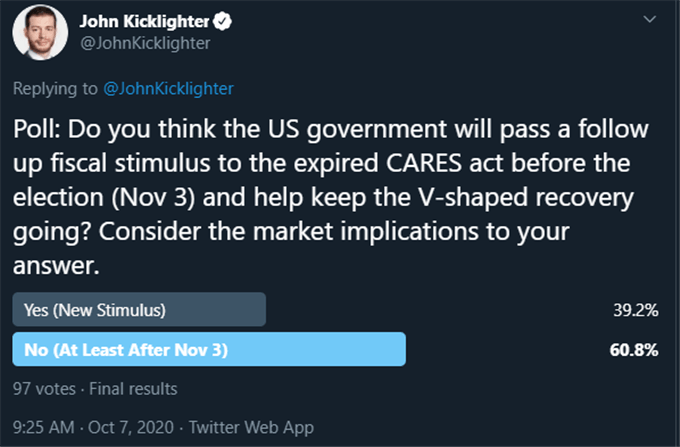 What Does the Dollar Prioritize: Political Risks, Safe Haven and Event Risk?

Shifting our focus forward, the sensitivity of the market’s performance depends heavily on what fundamental themes are that drive investors’ actions as well as the benchmark that we use to represent the market’s preferences. Baselines like the S&P 500 or Dow Index are certainly indicative of traditional risk appetite and should be followed for such systemic assessment. However, a singular asset that may provide more scope in its own performance is the US Dollar. The Greenback closed out this past week with a slide that looks like the actions of a safe haven under pressure. However, I believe the disadvantage of the United States’ inability to sign off on a much-needed relief stimulus has even more representation in this slump. Add in the economic implications of a truncated economic growth projection and the added political uncertainty picking up less than a month before the Presidential elections, and a pressure on he Dollar finds more motivation.

How has the Dollar traded around previous US elections? Read this article to see analysis on previous cycles. 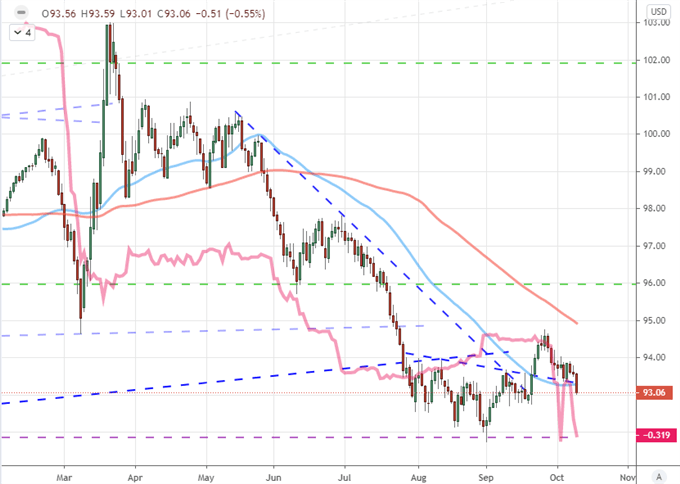 To further highlight the fundamental disadvantages faced by the US Dollar, we can further refer to EURUSD. This principal counterpart of the currency’s performance ‘allowed’ for a break above the 50-day moving average through this past week. Rather than a statement on ‘risk trends’, this drive can alternatively project divergent growth potential owing to the fiscal stimulus between the two economic leaders. With the IMF/World Bank due to update its global growth and financial stability reports this week, this is channel that will receive some charge. Further, with the US earnings season kicking off with the banks’ reporting and ‘Amazon Prime Day’ presenting another unique consumer spending update, there are multiple facets upon which US health will be measured. 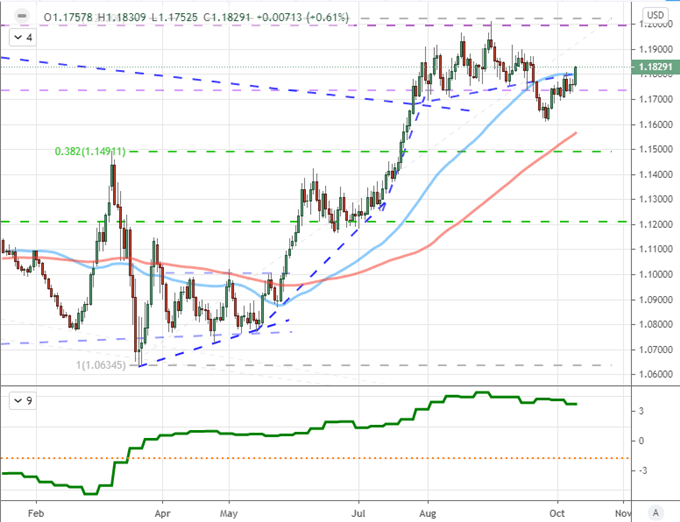 When using EURUSD as a checkpoint, the Euro’s fundamental health can be just as important to the market equation as the Dollar’s – so long as its winds are as substantial as its counterparts. Looking at the Eurozone an major component economies’ dockets, there is notable event risk to digest, but very little that stands out as systemically influential. The British Pound on the other hand faces fundamental swell that could compete with the influence of the US event risk. To close out this past week, the Sterling managed to edge higher despite a particularly disappointing August GDP an ancillary statistics thanks to the news from Chancellor of the Exchequer that the government was pursuing a stimulus effort to replace two-thirds of citizens’ wages whose jobs were affected by the pandemic. Both issues will factor into the Pound’s performance ahead, but recognition that we are approaching a key deadline in the trade negotiations between the EU and UK on October 15th is likely acting as a throttle to GBPUSD and other crosses. 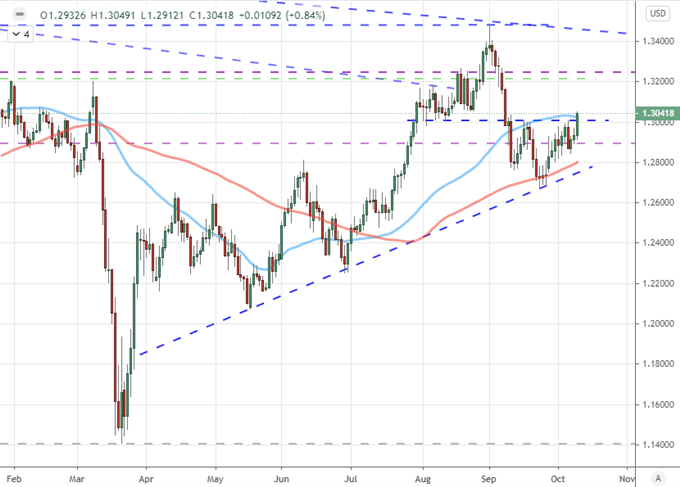 Another Dollar-based pair that closed out this week with an interesting technical performance is USCNH. The exchange rate between the US and Chinese currencies slipped to its lowest level in two years on a sharp end-of-week adjustment. The motivation for such a drive can be explained by a number of factors including ‘risk trends’ considerations. However, I believe the spark here is a little less systemic. Chinese markets have been closed through the week for holidays during which the government urged its citizens to travel in order to stoke domestic economic growth. If the internal demand swelled to offset the growing pressure against flagging export relations, their may be a strong dynamic at work for this cross. Alternatively, the convention may be one that is more manufactured than market driven. It will be tough to draw that out of USDCNH, but a frequent correlation via AUDUSD is likely to weigh in on belief more readily. With a break above range high at 0.7200, the stakes were raised.

Chart of AUDUSD with 50,100-Day SMA and Overlaid with Inverted USDCNH (Daily) 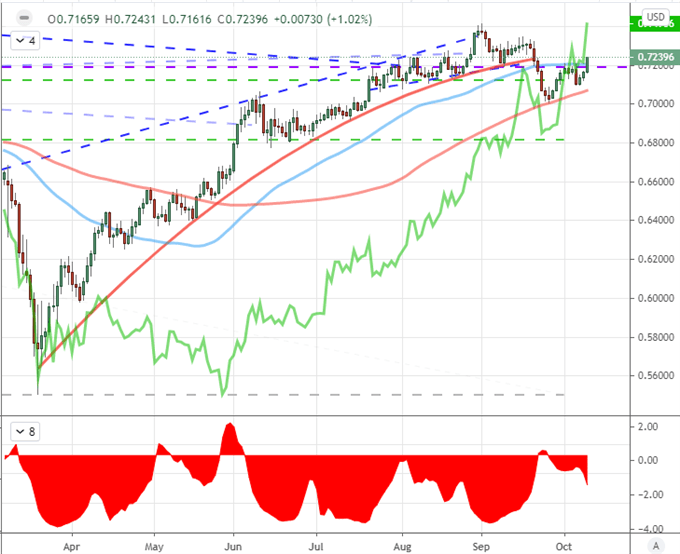