We are presently in the turbulent overlap of an unclear economic outlook, a resurgence of the global coronavirus case count and a US Presidential election. This is the kind of environment where a stable outlook draws a premium – particularly when measured against benchmarks like the S&P 500 and Dow that are trading remarkably close to record highs. That is the backdrop against which President Trump’s tweets landed. Tuesday afternoon, approximately an hour before the New York session closed, the Trump shot out an update on social media saying he was disappointed with the lack of a compromise on stimulus negotiations between his delegation headed by Treasury Secretary Steve Mnuchin and House Leader Nancy Pelosi. As such, he was directing his representatives to drop negotiations to only pick up after the November 3rd election. Market’s responded swiftly with a 2.7 percent slide into the closing hours of Tuesday liquidity.

Tweets from US PresidentDonald Trump 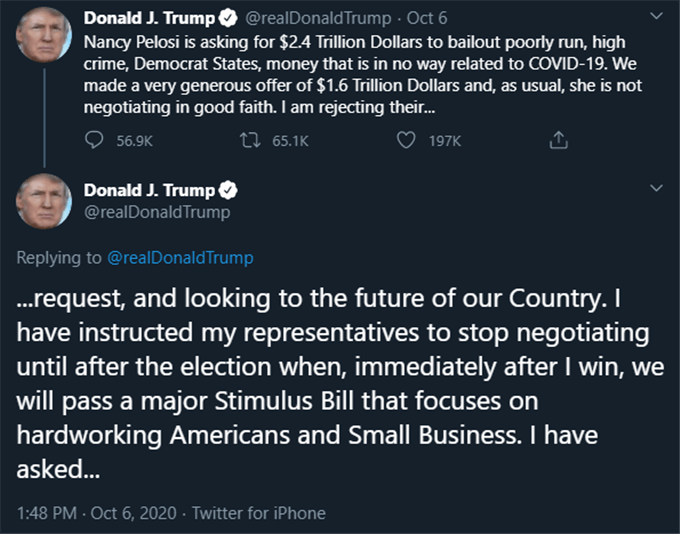 Perhaps part of a plan or more likely reaction to the unexpected fallout in the stock market, the President followed up just 7 hours later Tuesday evening to walk back his decisive curb on talks. The President’s nameless mea culpa came not with a full return to discussions but rather a very specific counter-offer. He called on Congress to put forward standalone $1,200 stimulus checks, $25 billion in airline payroll support and $135 billion in paycheck protections (all of which he suggested would come from unused CARES Act funds); and he would sign immediately. That plan tallies up significantly less than what the Democrats were pushing for in the follow up stimulus program. As such, it is even less likely that we are facing an imminent stimulus compromise from the US government than before the Tweet. So why would the market fully recover its lost ground with this general shift? Ambiguity. Risk appetite seems to continue to thrive against ambiguity, and this restores the hope that something could be done to jolt a flagging V-shaped recovery for the world’s largest economy. 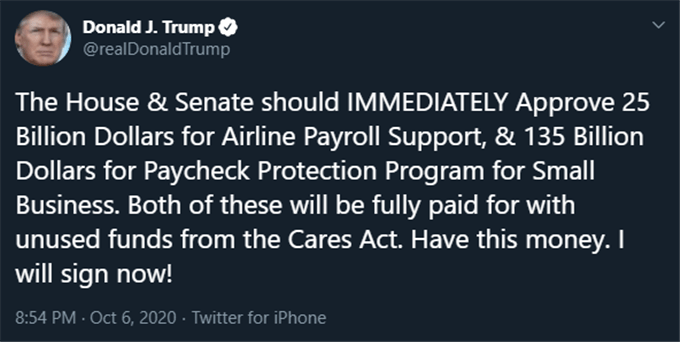 Taking a look at the S&P 500, the results of the external charge on the risk appetite is plainly visible. The initial tumble shows through readily on the daily chart as does the subsequent rebound that began with a gap higher on the open. However the technical picture represents well the restrictions on the fundamental and market conditions perspective that makes the sustained climb a very different route relative to the relief rally we experienced just through the past session. Clearing 3,420 with the intent to follow through would require a backdrop more conducive to developing trend while the very overt fundamental shortcomings of the economic outlook would need to be overcome. It is not at all impossible that speculative appetites or a data point pushes the market through resistance, but carrying it further higher is improbable given the mix.

How has the Dow traded around previous US elections? Read this article to see analysis on previous cycles. 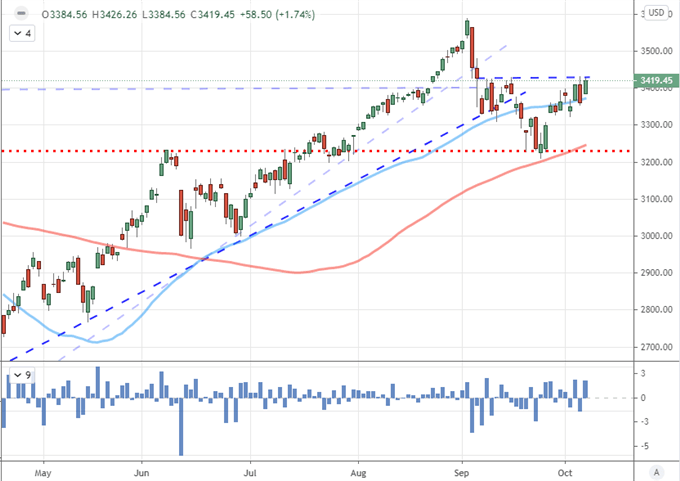 After the President’s first tweet, the Dollar took the unusual course to rally smartly in contrast to risk assets’ tumble. Naturally, when the growth/return-tuned markets recovered after the walk-back, the Greenback would again offer a mirrored reaction. This may not seem all that remarkable a course to traders familiar with the USD’s safe haven status, but in fact it is quite unusual for the currency given more recent habits. While still representing a harbor for capital when markets are gripped with fear, the high water mark to rouse the Dollar’s haven status seemed to have been raised materially in past months. The working tipping point from where I stand seemed to be a tangible threat to liquidity – which this hand not the time nor the temperament to reach. Perhaps that is why the DXY retreat would not fully reverse the initial rally. I am watching the index’s 50-day moving average as a milestone of support for next steps. 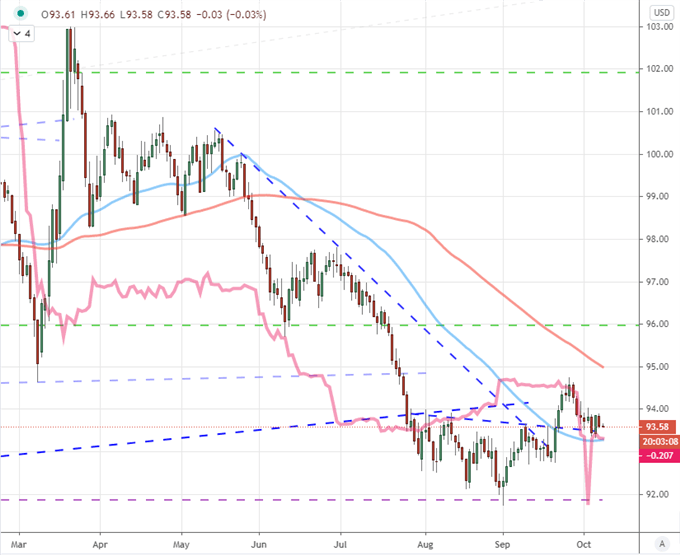 Instead of the Dollar simply reverting to its baser instincts as a safe haven – for better or worse – this and other top liquidity currencies have been acting more in accordance with their ‘relative potential’. Take EURUSD for example. The benchmark’s climb through the past four months seems to be rooted in Europe’s urgency in applying additional waves of monetary and fiscal stimulus while the United States saw its first pandemic response infusion expire at the end of July. Yet, fiscal stimulus isn’t the only measure to work with moving forward. Current growth statistics (such as German trade balance and US business confidence today) and monetary policy are other facets to weigh. The FOMC minutes this past session warned that the recovery was at risk of a return of the Covid wave and in need of fiscal supplement. Ahead, we have the ECB’s own minutes to give context and perhaps EURUSD more motivation. 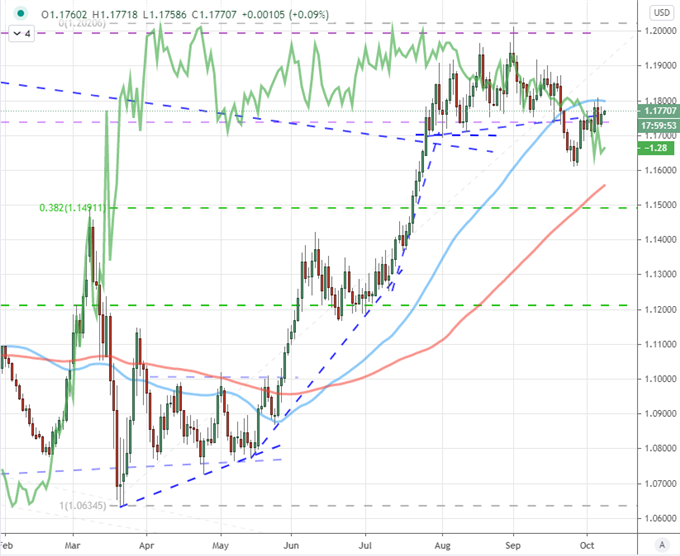 While more substantial market moves ahead are likely to arise out of systemic matters like deep speculative currents, forecast for global recovery or election developments; it is still worthwhile to follow interesting technical pictures across the spectrum. Recently, I have been drawn to the AUDUSD which has its own fundamental influences – such as the US-China trade war which was mentioned in the Vice Presidential debates. The technicals are of interest as well with a long recovery effort starting to slip after its weeks of fading tempo. Now between its 50-day (0.7200) and 100-day moving averages (0.7050) there seem milestones that many will be watching closely. 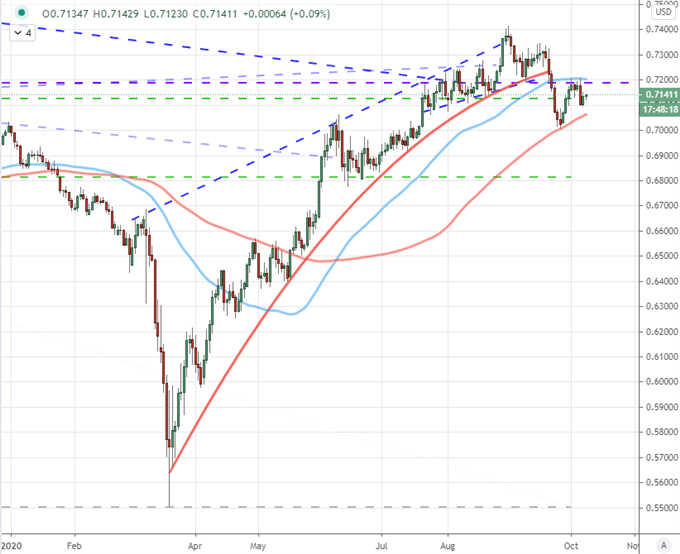