Dollar Climbs after President Trump Pulls the Plug on Stimulus Talks, Why?

The week opened with rumor – soon replaced with news – that US President Trump was recovering from his contraction of the coronavirus and would return to the White House to finish his treatment and observation. That was a ‘relief’ for the market relative to the systemic threat that an incapacitated leader for the world’s largest economy would represent, particularly this close to elections. However, what rally could have followed this development was significantly truncated by the recognition that the market hadn’t dropped materially through the end of last week in response to Trump’s being taken to Walter Reed. In other words, there was no discount to reverse; so the rally naturally flagged into Tuesday. We seemed to be heading into congestion through the second half of the New York session when the President pulled the pin on another fundamental grenade. With yet another break in stimulus negotiations, he Tweeted that discussions would be immediately halted until after the election.

Tweets from US President Donald Trump

The US government’s CARES act – the stimulus response to the pandemic – expired back on July 31st. Since then, some data has supported a coasting recovery for the world’s largest economy with particular flagging for the lower income bracket. This past week, announcements by Disney of 28,000 layoffs and mass furloughs by the largest airlines amplified the need for meaningful support for the an economy still grappling with the recovery from the forced shutdown. In fact, even Fed Chair Powell remarked earlier in the day that the risks were significant to the outlook and that government support was a necessary buffer. Instead, Trump directed Treasury Secretary Mnuchin to break discussions with House Speaker Pelosi. In reality, it was likely that these two sides would continue to find themselves on opposites sides of a compromise gulf; but they could politically claim the shortcoming as the obstinance of ‘the other side’. Trump’s pulling the plug seems to make this his administration’s decision. Risk assets responded directly to the news with a sharp intraday stumble. 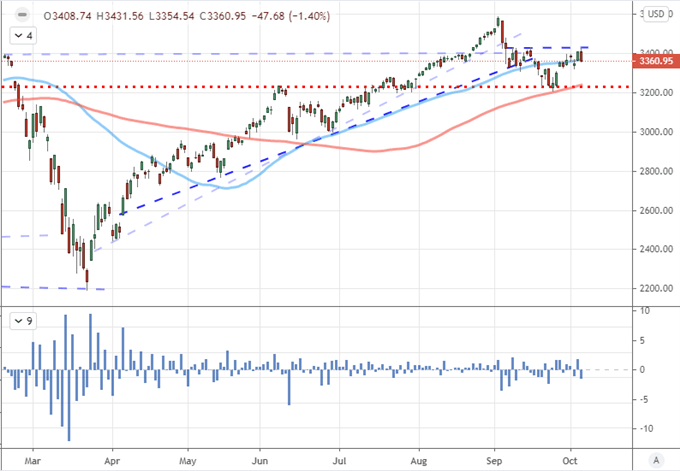 For the S&P 500, the response to the news was abrupt; but there is plenty of range for the market to work with until we near a technical point of capsizing. For this benchmark, my milestone is the ‘technical correction’ of a 10 percent slide from highs or the 100-day moving average which is roughly 3,225-235. That said, a more meaningful measure of risk aversion that can threaten sustained trend would be a broader deleverage. Notably, as the S&P 500 and Dow dropped so did the carry trade, growth-directed Treasury yields, crude oil, emerging markets and other assets with ties to confidence. The probability of a systemic risk aversion taking and holding is materially higher; but this is a market that has experienced countless bouts of convenient reversions to complacency. 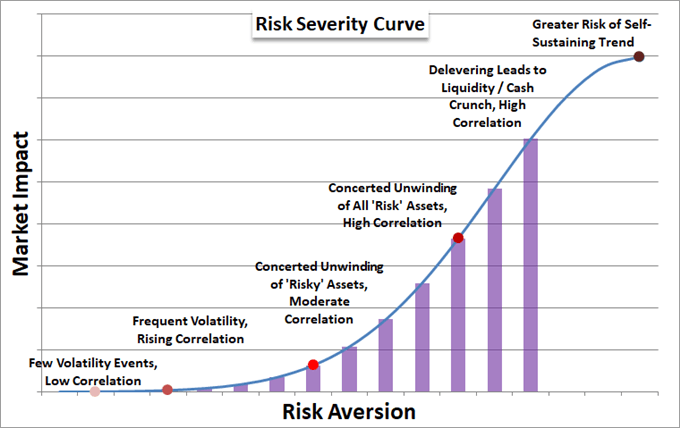 The breadth of risk trends is one of my favorite measures of fundamental movement. However, the response from certain measures is worthy of a closer look. From the US 10-year Treasury yields, a timely bullish break that may have reflected growth expectations or a throttled Fed intent was cut down by the President’s social updates. Similarly, the strong two-day rally from crude seems to have taken the wind out of the growth forecast sails. It was unlikely that the Democrats and Republicans came to a compromise over these closing weeks of the election cycle. That said, the expectation of a steadfast V-shaped recovery seemed to be a priced into markets when referencing many of the momentum-favored benchmarks like the Nasdaq 100. Seeing these tepid followers falter seems to signal something very different. 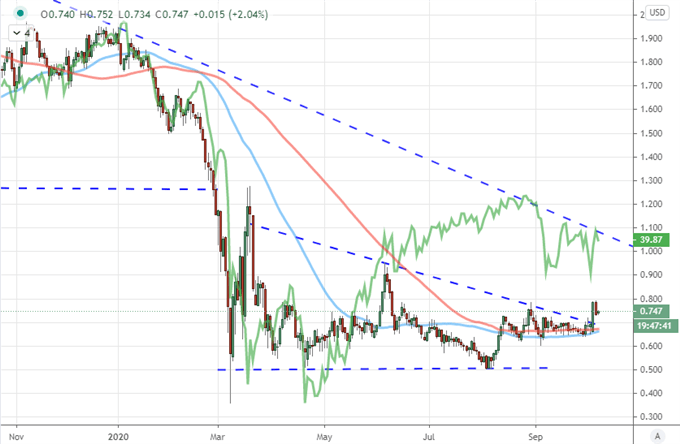 Is the Dollar a Safe Haven or Growth

When it comes to stimulus efforts, there are two general considerations I take into account: what – if anything – it does to general risk trends and how relative appeal shifts in the global spectrum. There is little doubt that the plug being pulled on stimulus negotiations was a risk off element – though Trump tried to parry into a suggestion that he was willing to due Airline stimulus and direct $1,200 checks on moment’s notice. What is more surprising is that the news say the Dollar rise. That was very different than what we saw from EURUSD in previous months when the ECB/EU stimulus approvals led to the rally to two-year highs just shy of 1.2000. Could this be a sign that liquidity is a more critical element in this tentative shift? Gold’s drop seems to add weight to that concern.

How has the Dollar traded around previous US elections? Read this article to see analysis on previous cycles. 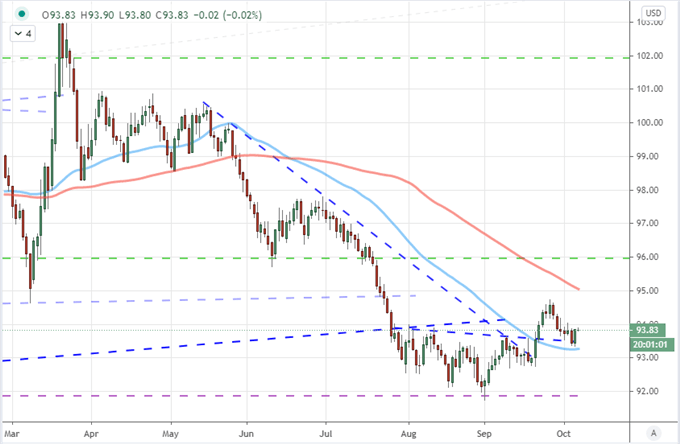 For the Dollar, risk status is a key consideration for intent moving forward. That said, it isn’t the only systemic fundamental matter to digest. The election polls are of material importance and the recent developments seem to have favored former Vice President Biden and his bid to the White House. Ahead, we are looking to the Vice Presidential debates Wednesday evening at 9 PM EST. Given the lack of clarity on platforms at the Presidential debates, this event will likely carry more weight for the expected clarity it may offer. 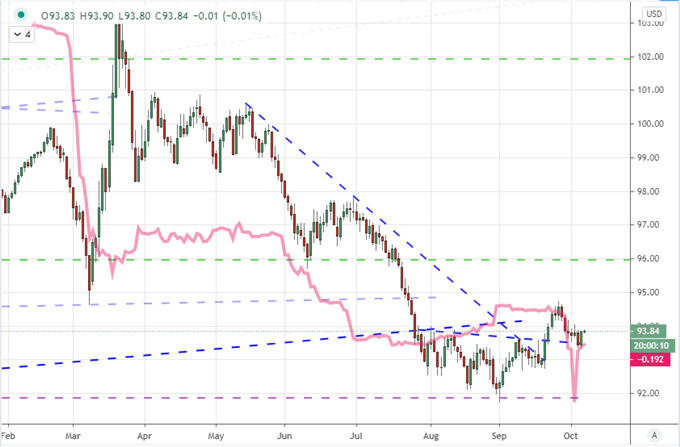 While anticipation of the next debate will be a beacon for attention further ahead, there is plenty of additional event risk and looming thematic issue to evaluate for market risk. The coronavirus spread seems to be taking a backseat to the politization of the pandemic, but cases of infection are rising again into the Winter months. For certain countries, the curve is far more intense -like the United Kingdom where the Chancellor Sunak is reportedly preparing fresh stimulus for small businesses alongside the Prime Minister’s plans to shut the economy. Then there is also monetary policy which was overshadowed this past session. In the FOMC minutes Wednesday and ECB transcript Thursday we will see whether these loose policy groups were already on a path to prop the markets before the governments announced their limits on support. 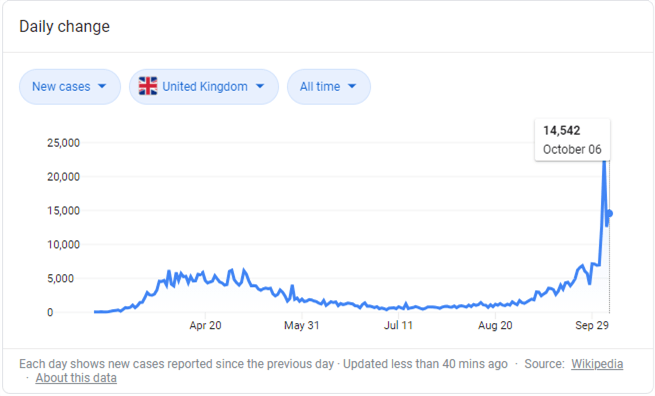